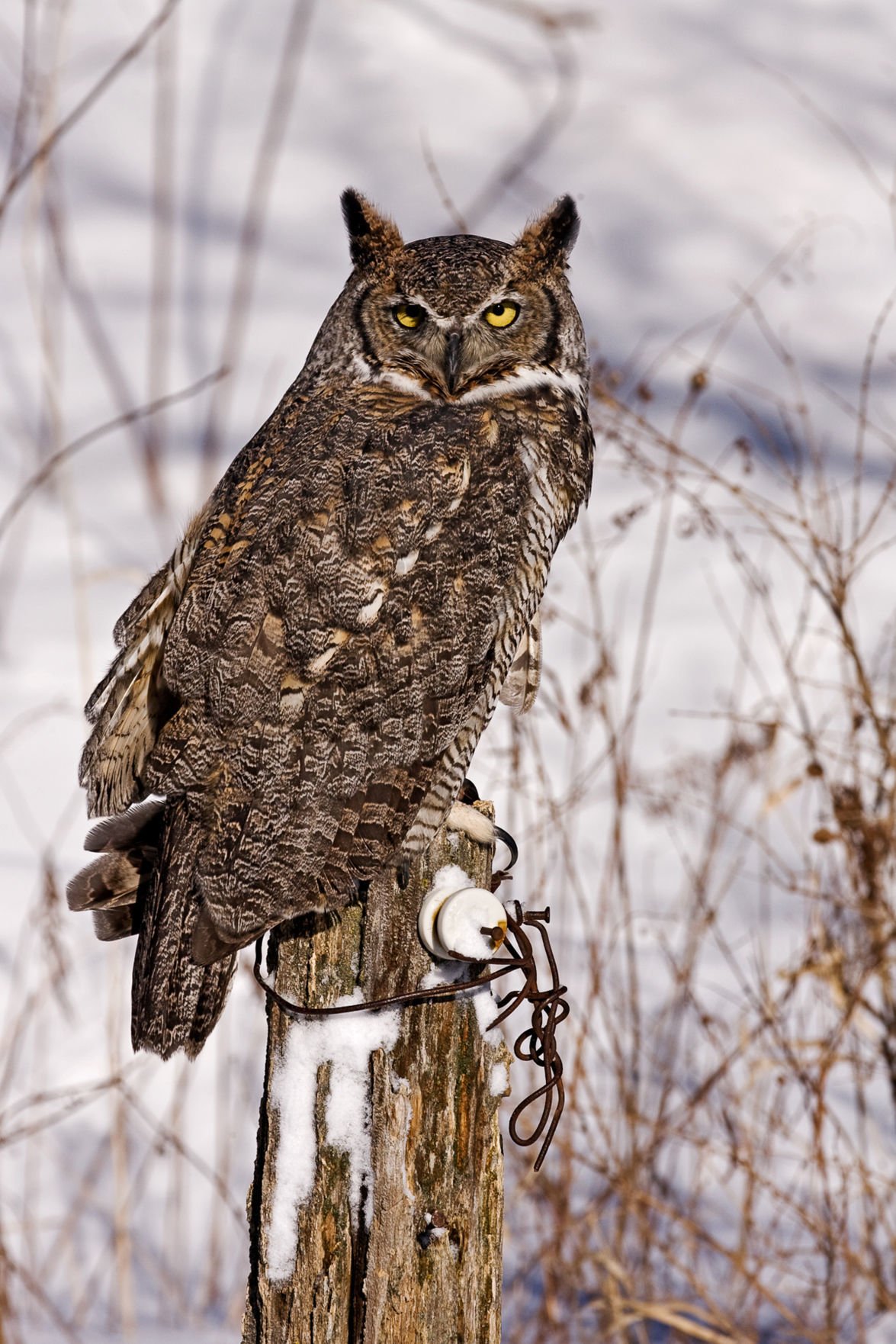 At this time of year, I get a lot of emails and texts from people reporting they are hearing an owl hooting outside their windows at night. While many enjoy the sound, others complain they can’t get to sleep. Either way, the chances are a great horned owl is the culprit. The great horned owl (Bubo virginianus) is the most common owl in North America, ranging from coast to coast and well into Canada and Alaska, and south down through Mexico and into Central America.

Great horns are the largest owl in America that has ear tufts. The tall and puffy ear tufts are a collection of feathers located just above each eye that appear like ears or horns, hence its common name. The feather tufts don’t function to help with hearing, but rather are thought to be a decoration or ornamentation. Some argue that the tufts help the owl blend into the environment during the day, so they are not bothered by daytime birds such as crows.

Great horned owls are usually a warm shade of brown to tan, with some gray thrown in as highlights. Sometimes they can be a bright shade of gray to nearly white. They have large, bright yellow eyes and a characteristic white, V-shaped marking on their throat, which looks like a necklace or a bowtie.

Females and males are identical in plumage, however females are noticeably larger than males. On average they are 2 feet tall and have a wingspan of nearly 4 feet. For all their size, great horned owls only weight between 2.5 and 3.5 pounds. Even though they are large and powerful raptors, they are still not large enough to carry away a dog or cat that weighs more than 10 pounds.

January and February are mating times for the great horned owls. They are the earliest nesting bird in most of America. They are also out choosing a nest site. Great horns don’t build a nest. Instead they take over a hawk, eagle or crow nest. Since these birds usually don’t nest until much later, the owls just move in and take over. Sometimes they will not use a nest at all, but settle for a slight depression or cavity in a tree for nesting.

Shortly after mating, the female lays two round white eggs. Incubation of the eggs takes about 26-30 days. The first chick hatches about 24-48 hours before the second. The mother will continue to sit upon the chicks for another month, while the father brings food for the entire family. Fathers will brood, or sit on the young, for a short period of time each night to allow the female to go out and stretch her wings and defecate.

Owls in general have some amazing and unique characteristics. First, their large yellow eyes are fixed into their sockets unlike yours and mine. They make up for the lack of eye movement by having extra vertebrae in their necks that allow them to swivel their heads up to 270 degrees. We have seven vertebrae in our necks, and owls have 14. Of course, they cannot turn their heads all the way around.

All owls have unique flight feathers that give them silent flight. The edges of the flight feathers are ragged compared to the straight feather edge other birds. The ragged edges disturb the air in micro swirls, thus reducing any sound. Kind of like a silencer. This silent flight has always been mistakenly believed to allow the owl to sneak up on its prey. However, it is believed now that since the owl usually locates its prey by hearing alone, it must continue to use its hearing to follow the prey even while in flight. This means if it didn’t have silent flight, it would not be able to track prey during the approach flight.

So, if an owl is hooting in your backyard this year, try to enjoy it with the knowledge that you have one of the coolest birds nesting nearby.