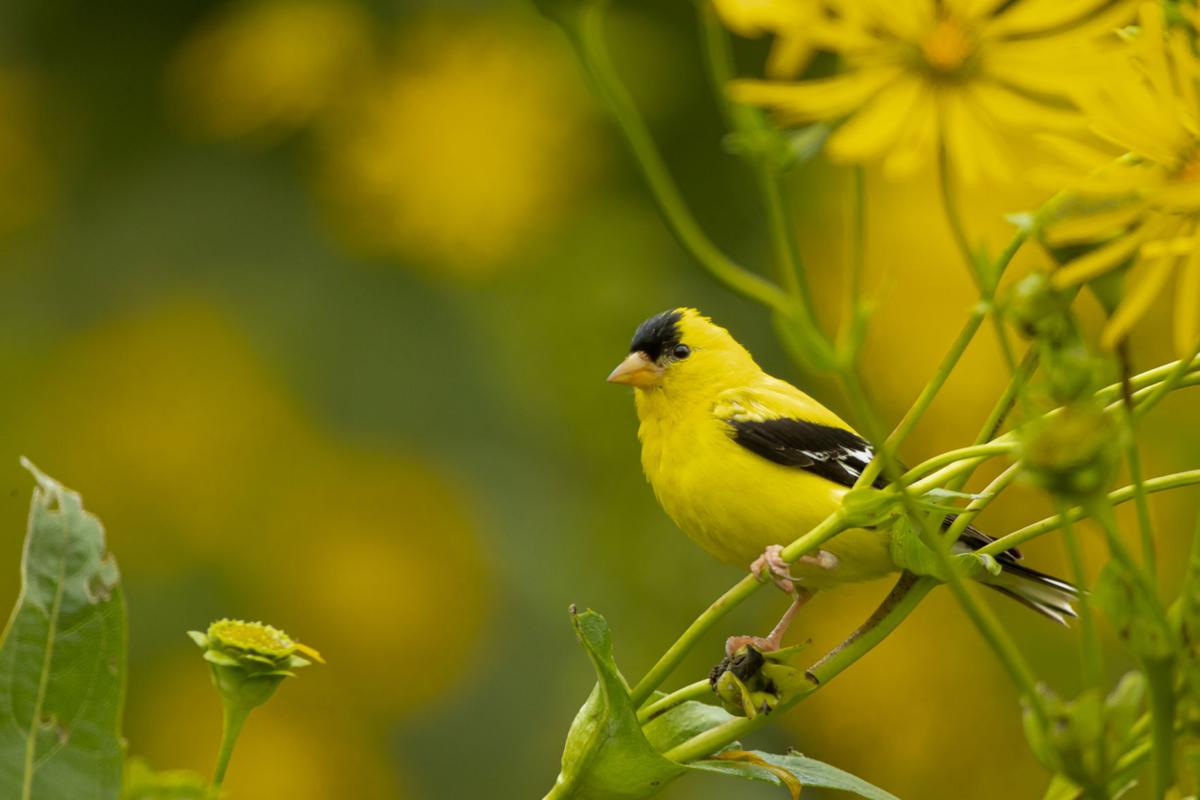 The American goldfinch feeds nearly exclusively on seeds. This is called being a granivore.

Several mornings a week, I rise early and head out to my favorite patch of late blooming flowers. It’s a large patch of tall, bright yellow flowers.

At this time of year there isn’t a lot of flowers that are blooming, so it is like a magnet in attracting the few remaining hummingbirds and a wonderful bright yellow bird called the American goldfinch (Spinus tristis).

American goldfinch (male) is a small yellow and black finch found throughout most of America. But you don’t see them all the time. Unlike other migratory birds, the American goldfinch has a bad case of wanderlust. They move around finding different sources of food.

According to several leg band studies, American goldfinches that have been banded in southern states have ended up in northern states during winter and visa-versa. They don’t have predictable migratory patterns like other migratory birds. They seem to just wander around following food sources.

Speaking of food, the American goldfinch feeds nearly exclusively on seeds. This is called being a granivore. Seeds are so important to the American goldfinch that they will hold off on breeding/reproduction until mid- to late-summer to time the hatching of their chicks with the ripening of many seed crops. In particular, the goldfinch is waiting for the thistle seeds to ripen.

There are many species or varieties of thistle. Most are two to three feet tall with blue or purple flowers and tend to grow in open fields, along roadsides, in ditches and farmers’ fields. They usually have prickles or thorns and often grow in large groups or clusters. In general, the thistles are not well liked by people, but the American goldfinch loves them.

American goldfinches feed their young an exclusive seed diet. Both male and female goldfinches will feed their babies. Now here is the interesting part. After feeding upon the ripened seeds, the adults will return to the nest and regurgitate a mass of ground-up seeds along with a milky liquid. Stick with me for a moment while I explain why this is interesting.

A bird’s digestive system has two stomachs. The first is called the gizzard. It is a thick muscular-walled stomach with a rough bumpy inner lining that is used to grind up the food in a dry environment. This is important since birds don’t have teeth, and they need this front-line stomach to grind their food.

The problem is, no real digesting occurs in the gizzard, just breaking up of the food. Digestion takes place in the second stomach, where the stomach acids are located. So, in goldfinches, the lining of the gizzard sheds layers of liquid-like cells which act like a seed lubricant when regurgitating the seeds to feed the young birds. A highly unusual trait.

The American goldfinch chicks grow extremely fast on the seed/liquid diet. Unlike other birds, the parents of goldfinches only feed their babies about once every one to two hours. Compare that to other species of bird that feed their young with insects many times per hour.

You can attract these amazing birds to your yard by offering a feeder that holds a special tiny seed called Nyjer. You will need a feeder designed especially for this seed. It needs to have tiny ports or openings to allow just a few of the tiny Nyjer seeds to be dispensed. The seeds are so small that if you put the Nyjer seed in a regular feeder the Nyjer will just flow right out the large openings and onto the ground.

The Nyjer plant is native to Ethiopia. However commercial Nyjer seeds are grown in Africa and India and contain high amounts of proteins and nutritious oils which the birds love. Before packing and shipping, the seed are sterilized by intense heat to prevent germination. This is important to prevent non-native plants from being established.

If you want to increase your bird activity at your feeding stations, consider adding a Nyjer seed and feeder.