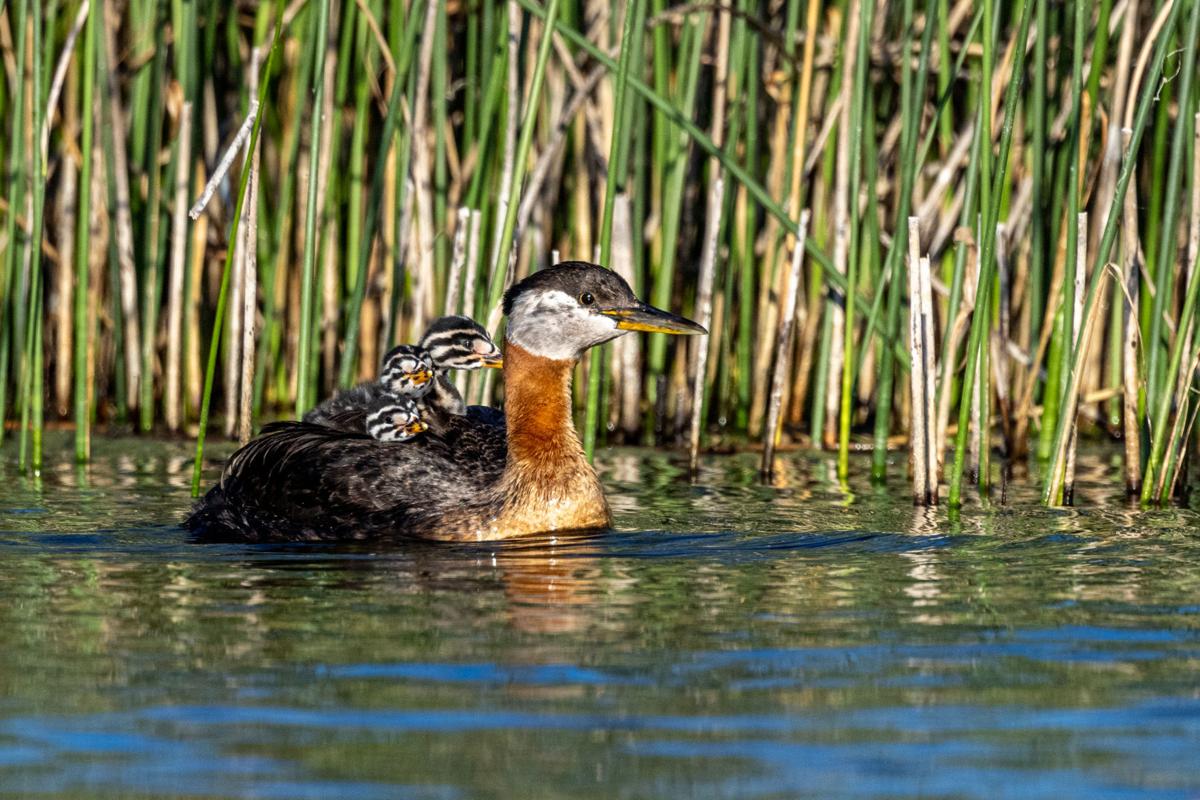 A red-necked grebe adult, with babies on its back.

The wide diversity of birds on earth should be a reminder to us all that the natural world is a place where life takes all shapes, colors and forms.

I was reminded of this recently while running my loon photo workshop/tours. I like to surprise my clients with a “bonus bird” to photograph during the loon tour. I usually don’t tell them about it until we are in the boat and heading in the direction of the bonus bird. When we arrive, everyone is thrilled to see a family of red-necked grebes (Podiceps grisegena).

Grebes are a fun and interesting group of birds that are closely related to the loons. I often think of them as mini versions of loons. Just like loons, grebes occur in freshwater habitats during the breeding season and move to marine (saltwater) during winter. While this may not seem very remarkable, not many species of birds can do this. Usually, birds are adapted for freshwater or saltwater but not both.

There are 22 different species of grebe in the world, and all are highly aquatic and excellent swimmers and divers. Just like loons, they have legs and feet that are located far back on their bodies, which is fabulous for swimming, but renders them unable to walk on land. Most grebes are reluctant to fly, and when they do, it is usually at night for migration. Once they arrive on the lake in spring, they usually don’t fly at all until the autumn, when it’s time to migrate again.

We have seven species of grebe in the United States. The pied-billed and the red-necked are the most common species in my area of the northland. But we have at least three other species that pass through during spring and fall migration.

The red-necked grebe lives in shallow freshwater lakes with enough vegetative cover to provide a place to nest. These areas of cattail or bulrush are very important part of the lake habitat. The red-necked grebe builds a nest out of last year’s rotting vegetation. The nest is flat and constructed to float, so if the lake level suddenly goes up or down, the nest moves along with it. However, mastering the proper nest construction takes a couple years, so the nests of many young birds get washed out.

The feet of grebes are unique. Ducks and loons have web feet, but grebes have webbed toes. Which means the webbing between their toes doesn’t connect toe to toe like ducks and loons. The webbing is around each individual toe. The effects are the same — grebes are powerful underwater swimmers. Red-necked grebes eat fish and aquatic insects that they catch underwater. So being able to swim fast underwater is imperative.

They feed mainly on fish and aquatic insects, but they also eat something very different. They also eat feathers. That’s right, they consume their own feathers. And they also feed their babies tiny feathers which they groom out of their own body.

The adults spend a lot of time preening and grooming their feathers. Whenever a small feather is dislodged, the parents quickly pick it up and feed it to their babies.

There is plenty of speculation as to why they eat feathers or feed them to their young. It was believed the feathers helped line their stomachs to protect from fish bones. But if you know anything about avian digestive systems you will quickly realize this can’t be the reason. We may never know why they do this unusual behavior, but it’s fascinating to watch.

They lay two to five eggs. Both parents take turn incubating the eggs. As soon as the young hatch, they can swim. They leave the nest and follow their parents around within hours of hatching. Just like loons, the young climb on the back of the adults to ride around. This provides a level of protection for the young from predators such as large fish and turtles. It is also a place to keep warm and a place to catch a nap.

When I’m leading my photo workshops and we find a pair of red-necked Grebes with the babies riding on their parents back, it is a huge bonus and is often an experience the participants will remember for a very long time.