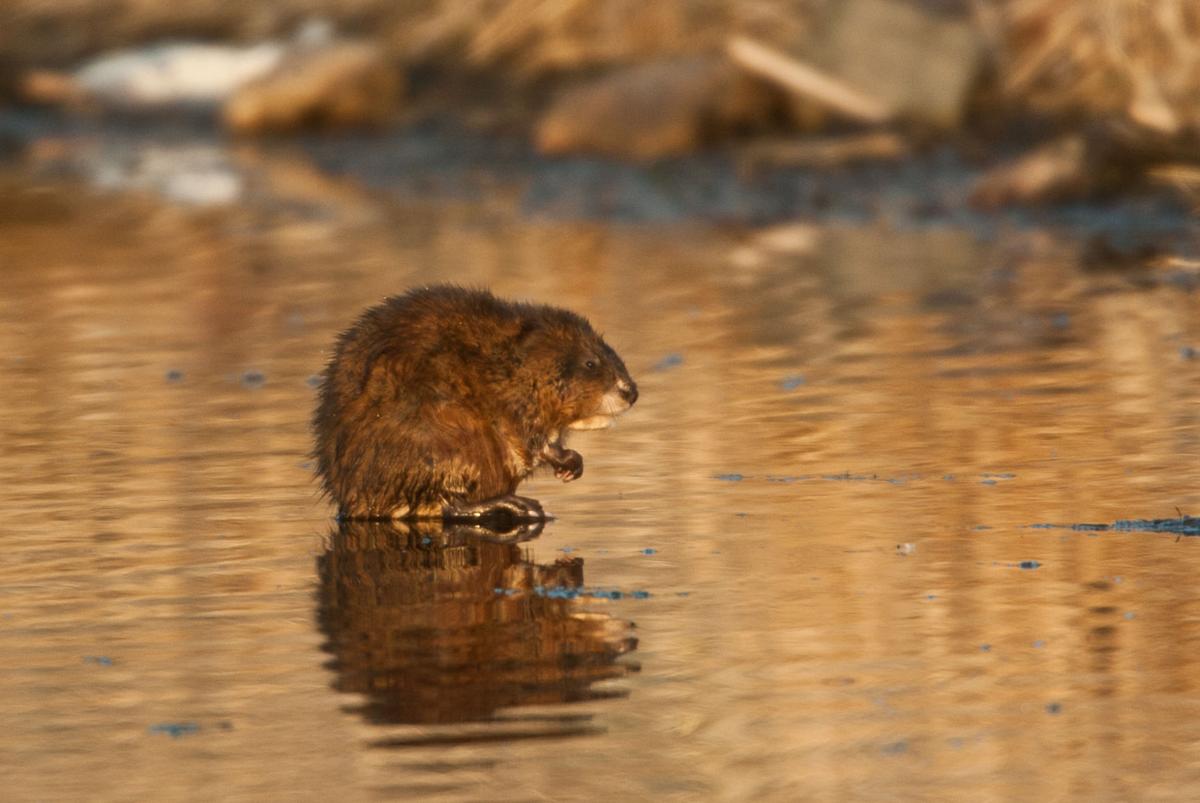 It’s believed that the muskrat got its name in part due to the musky smell it produces to mark its territory and its naked, rat-like tail.

This winter has been a bit strange in the northland where I reside. Not much snow but enough cold temperatures to start freezing the lakes. The small lakes and ponds freeze up tight right away, but the larger lakes have open water near the center or in the deeper areas. While out photographing the other day, I noticed something small, round and brown at the edge of the open water. A muskrat (Ondatra zibethicus) had climbed out of the water and was enjoying the remaining sunlight of the day. I immediately thought how this is a critter that is overlooked in nature.

Despite their name, muskrats are not rats. They are not even in the rat family. Instead, they are more closely related to voles and lemmings. They are a medium-sized semiaquatic rodent that is native to North America, but they have been introduced to much of Europe, Russia, Asia and South America.

The name muskrat is believed to come from the Algonquian Indian language, “musascus,” which means “it is red,” apparently from the color of the fur. It is also believed that since this animal produces a musky smell that they use to mark its territory and it has a naked tail like a rat, the name was altered to musk-rat then formally changed to muskrat.

I find that many people mistake the muskrat with the beaver because they share similar habitat. However, the muskrat is a fraction of the size of the beaver. The muskrat is only about 16-25 inches in length with half of that as the tail. Beavers range from 35-49 inches long with their tail making up only about 12 inches. Muskrats weigh two to four pounds while beavers coming in between 30 to 70 pounds. That is huge difference.

The fur of the muskrat is short, thick and very soft. The fur has two layers, a short layer which provides warmth and waterproofness, and the longer hairs provide the shape, color, and protection from physical objects in the environment. The fur is why muskrats can swim in nearly freezing cold water or stand around on the ice in winter and not be cold. They spend a lot of time grooming and taking care of their fur.

Muskrats spend a lot of time in the water. They are well-adapted for an aquatic lifestyle. Their hind feet are partly webbed, and the toes have a fringe of stiff hairs all of which helps them when swimming. Their tail is naked, as are most of the animals in the vole family, but the muskrat’s tail is flatted on both sides (laterally compressed). No other animal in North America has this trait. It is believed the tail shape helps propel them when swimming.

These cool critters are active any time of the day or night. They live in small- to medium-sized groups, which are broken down into family units with one male and one female and their young. They feed mostly on aquatic vegetation, typically the lower quarter of a plant. About 95% of their diet is plants. But they also eat small animals such as crayfish, snails, frogs and fish.

The preferred habitat are shallow lakes and ponds where the water is no more than 4 feet deep. They make homes, called lodges, from aquatic vegetation. It is easy to tell the difference between a beaver lodge and a muskrat lodge. The beaver lodge is constructed of woody vegetation such as sticks and branches from trees. The muskrat lodge is constructed of green or herbaceous plants such as cattails and bulrush.

The muskrat lodge stands above the water but has an underwater entrance. The walls can be upward of two feet thick and provide a warm and safe interior environment. Studies show that during winter, the interior of the lodge can be upward of 30 degrees warmer than the outside air temperatures.

Muskrats don’t hibernate during winter. They remain active under the ice and inside their lodge. Unlike beavers, they don’t store food for winter. They continue to feed upon aquatic vegetation, sometimes eating the walls of their lodge. They make narrow channels through the cattail marsh which they use during winter when all the water is frozen.

So, this winter, keep an eye out for a small round furball sitting on the edge of the open water. You might be seeing the incredible muskrat. Until next time…