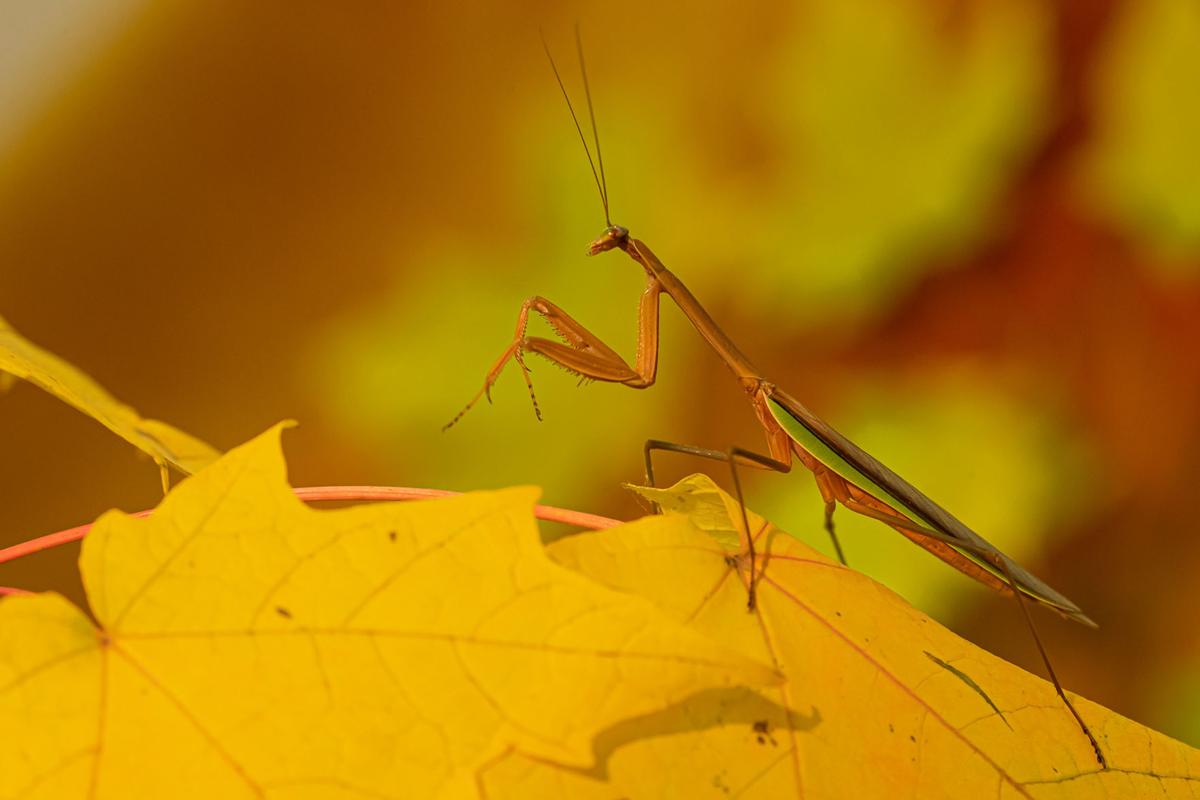 Mantids have stereoscopic vision provided by the large compound eyes. They have a central focusing spot located inside the eye that allows them to produce high resolution vision to help them see prey.

I really find that some of the most amazing animals on the face of the earth are the insects. I recently spent some time capturing a few incredible images of just one of these amazing animals, the praying mantis, often just called mantid.

The mantids are such a cool critter. They can be found worldwide in temperate and tropical regions. Believe it or not, there are over 2,400 different kinds or species of mantids in the world. They range in size and shape with some looking rather plain and so tiny they could perch on the tip of your finger, while others are fabulously decorated and look like leaves or orchid flowers and can be upward of 4 inches long.

No matter what they look like, all the praying mantis share some similar features. They have large triangular heads with two huge bulging compound eyes. In addition, they have three smaller simple eyes located between the compound eyes. They have very flexible necks that allow the head to swivel and turn to just about any angle, and two long antennae on the top of their head.

Mantids have stereoscopic vision provided by the large compound eyes. They have a central focusing spot located inside the eye that allows them to produce high resolution vision to help them see prey.

What I find the most amazing is a tiny dark spot in the eye that appears like a pupil that moves around. However, the dark spot is not a pupil and is therefore called a pseudopupil or fake pupil. The dark spot appears to move around the surface of the eye as the mantid moves its head.

The first time I saw this, it really threw me off. I could not understand how a compound eye, which is a collection of many smaller eyes (up to a thousand tiny eyes) could have a pupil. However, the dark spot is simply the region of the compound eye that absorbs daylight, giving it the appearance of being dark, while the rest of the eye is reflecting light giving it the appearance of being bright.

They also have large forelegs with forearms that fold up, so they appear to be praying, hence their common name. These specialized legs are called raptorial legs. The name raptorial means “adapted for seizing prey." And that is exactly what they do with them.

It is the large forelegs that capture and hold their prey. This feature alone sets this animal apart of all others. Mantids are ambush hunters. They perch on vegetation for hours at a time using their huge eyes to spot any prey that wanders close. Using their coiled-up forelimbs, they quickly snatch up the hapless prey. They also have a series of very sizable spikes that stick out of the forelimbs and help hold the prey.

Another amazing feature of this cool critter is what they eat. The small mantids eat mainly other small insects. However, the larger mantids are well known for eating things as large as frogs, lizards and even birds such as hummingbirds. I know it seems crazy, but I have seen it. More than 10 years ago, I was filming hummingbirds in Arizona and saw a mantid hunting hummingbirds.

If sitting and waiting doesn’t work, the mantids will stalk around trying to get close enough to prey to grab them. When threatened, the mantid will stand tall with its legs apart and wings fanned out to look larger and more threatening. They will also strike with their forelegs. If all else fails, they will fly away.

Sometimes when mantids are walking they display a rocking motion. It’s a repetitive or rhythmic rocking from side to side as they move along. The exact function for this behavior is not well understood. Some believe that this movement allows the mantid to differentiate objects from the background by their relative motion. Others believe it is a way to move without giving away their presence to prey.

No matter how you slice it, these critters are nothing short of amazing. I am sure if you run across one of these critters in your garden, you will be just as enthralled as I am.