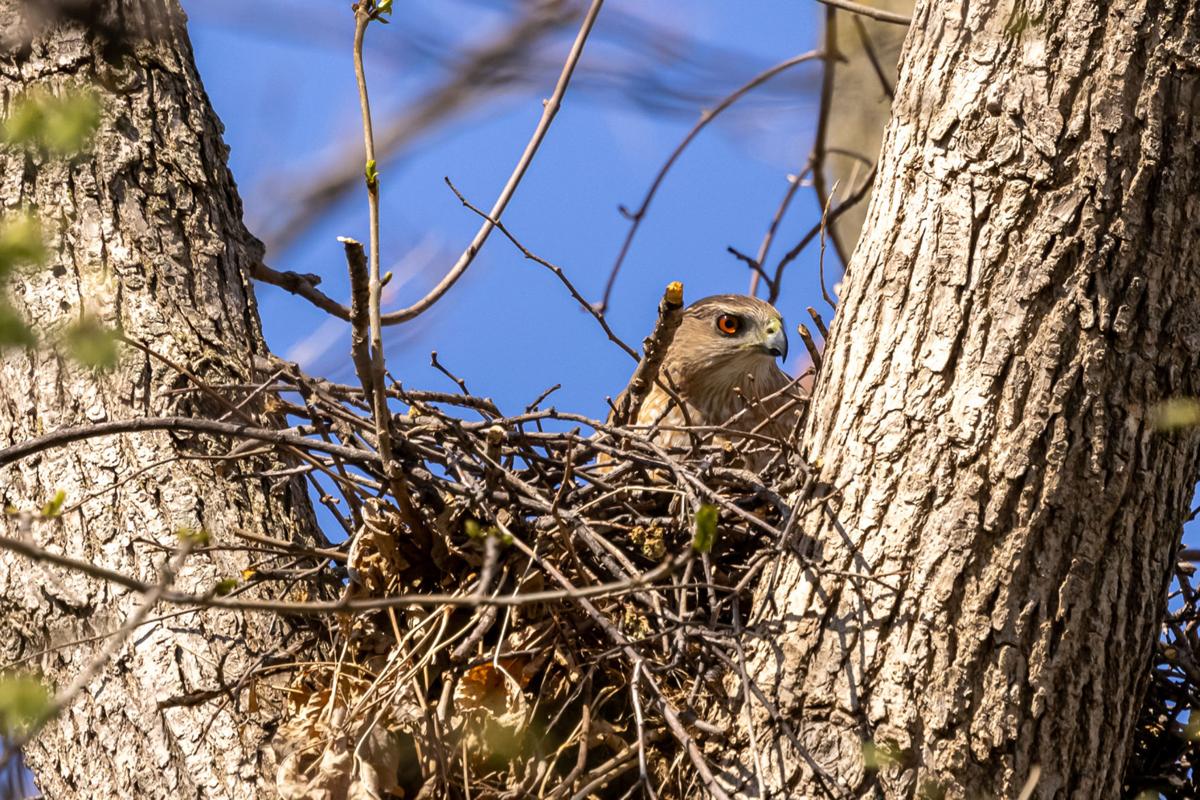 An adult Cooper’s hawk sits in its nest. The birds are famous for their amazingly quick and agile flight.

Each spring in nature there is a lot of tragedy and triumph. Heartbreak and happiness. Success and failure.

As the natural world gets down to the task of replenishment, not all critters will be lucky enough to raise their young. This was painfully obvious to me the other day while filming and documenting a family of Cooper’s hawk (Accipiter cooperii).

The Cooper’s hawk is an amazing top predator. As its name implies, it’s a type of hawk. A medium-sized woodland hawk with short broad wings and a long narrow tail. It is often seen by many who feed birds in their backyards, swooping around, and chasing the birds that visit your feeding station.

These hawks are some of the most widespread and common of all the raptors. They are found and nest in every state in the country except for Alaska. During winter they will migrate out of many of the northern states for several months, but quickly return in the spring.

They are often referred to as “true hawks” and are famous for their amazingly quick and agile flight. And they need this rocket-like flight to capture their prey. These hawks make a living at eating other birds. They prey on anything from warblers and sparrows to larger birds such as mourning doves, but one of their most favorite food is the northern flicker, which is a large woodpecker species. Either way, other birds are always on the menu.

They can be stone cold killers and are considered to be on the top of the food chain, but that doesn’t always protect them. This spring, I have been observing a female Cooper’s hawk that was building a nest about 40 feet up in a small tree. For many days she brought in stick after stick slowing building up a nest platform, large enough for her to sit comfortably and also accommodate her eggs and eventual offspring.

I spent a lot of time scouting out the area trying to figure out the best angle to film the nest and the forthcoming young. I finally decided upon the angle. Next, I bought in my small one-person blind and set it up in a suitable area. The blind was located about 50 yards away from the nest to ensure I wasn’t impacting the hawk. I climbed into the blind to make sure the view was good. This is the most important part of the photo set-up. Placement of the blind can make or break a shot.

Making sure I am not impacting the bird while it goes about its daily routine is extremely important to capturing natural behaviors. So, the blind needs to cover me and all my camera gear, with the exception of the front of the lens. Now all I had to do was wait a couple days for the mother to become accustomed to the blind and for the eggs to hatch.

So, as you can see there is a lot of prep work needed for just one photo shoot. And I was very excited to get started. I was planning on spending many, many hours covered up, in cramped quarters, out in the woods. But one night something happened. The predator became the prey.

I don’t know what, because obviously I wasn’t there at night, but something happened, and the bird who sits at the top of the food chain was knocked off the top spot. When I arrived one morning, the mother was gone.

I am guessing that a predator came in and went after the incubating female and or the eggs. It could have been any number of other predators both avian or terrestrial, and I don’t want to point fingers and play the blame game, but this predation points out the simple fact that Mother Nature doesn’t follow the rules that we put forth for her. Mother Nature is hard and often times difficult.

We need to remember that only the strong survive and that predation is what makes Mother Nature stronger and propels it forward into the future in a much stronger and vibrant fashion. And it doesn’t matter if we people think it’s cruel or unusual. Because it is how nature works and we need to learn to understand and accept it.