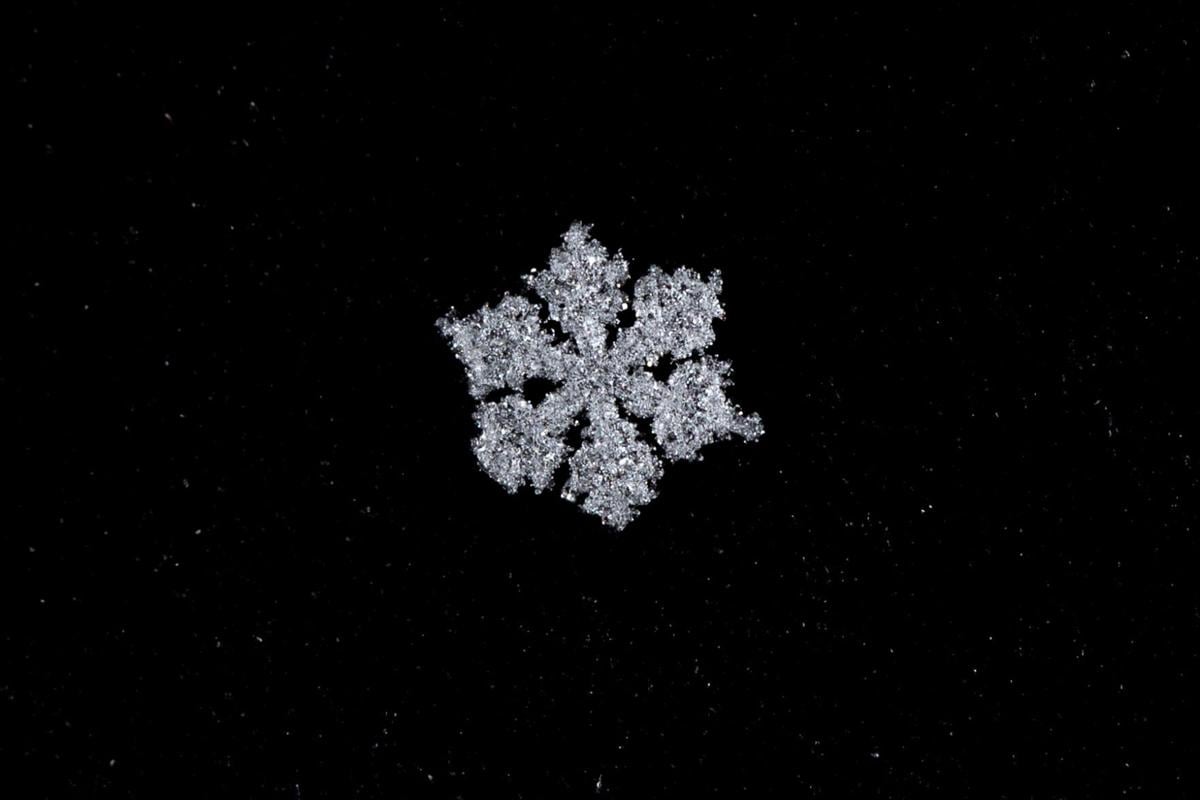 It has been estimated that about 1 septillion snowflakes fall from the sky during an average winter.

A light and gentle snow started falling the other day while I was out in the woods. Quickly the tiny flakes started to build a uniform blanket covering the ground. It was a beautiful scene.

It was at this point that I started to notice the individual snowflakes that were sticking to my dark green jacket. I could see amazing shapes and sizes, so I decided to try and capture the wonder and beauty of the snowflake in pictures.

Water vapor, the gaseous phase of a water molecule (think about the steam that rises when boiling water) starts to coat a tiny particle such as dust or pollen and begins to freeze. This tiny crystal is called the “seed” for the snowflake that is yet to fall from the sky.

The newly formed ice crystal “seed” is heavier than the surrounding air and begins to descend. As it starts to fall toward Earth, it passes through humid air which causes more water vapor to freeze to the seed. This freezing process is very systematical, and the water molecules found in the vapor arrange and freeze into hexagonal crystal structures. As more and more vapor freezes to the seed, the snowflake starts to take shape and grow larger and larger.

Snow falls only when the air temperatures are below freezing all the way to the ground and there is enough moisture in the air to support the growth and formation of the snowflake. Snowflakes form in clouds that are above 10,000 feet elevation. Given the average falling speed of 3.5 feet per second, a snowflake would take about 45 minutes to an hour to fall and reach the ground, so there is lots of time for the snowflake to grow as it descends.

It has been estimated that about 1 septillion snowflakes fall from the sky during an average winter. That is a lot of snow, but not even close to the amount of water that falls during the warmer months of the year in the form of rain.

The freezing vapor arrange themselves into hexagonal (six sided) structures and gives the basic and most common snowflake its design or shape. The hexagon shape has six arms or projections and an infinite number of projections off the arms.

In addition to this basic shape there are many other snowflake shapes. The shapes of snowflakes are dictated by the air temperature and the amount of humidity in the atmosphere. Less humidity in the air tends to form simple shapes, while high humidity produces more complex shapes.

Which brings me to the age-old statement that no two snowflakes are the same?

To answer this, you first need to define what is alike or same or similar. Since so many snowflakes are similar in appearance this statement might be true if you say “same.” However, if you say “exactly the same” the story changes.

So, the next time you are out, and the snow starts to fall, take a minute to examine the marvelous jewels that we call snowflakes.