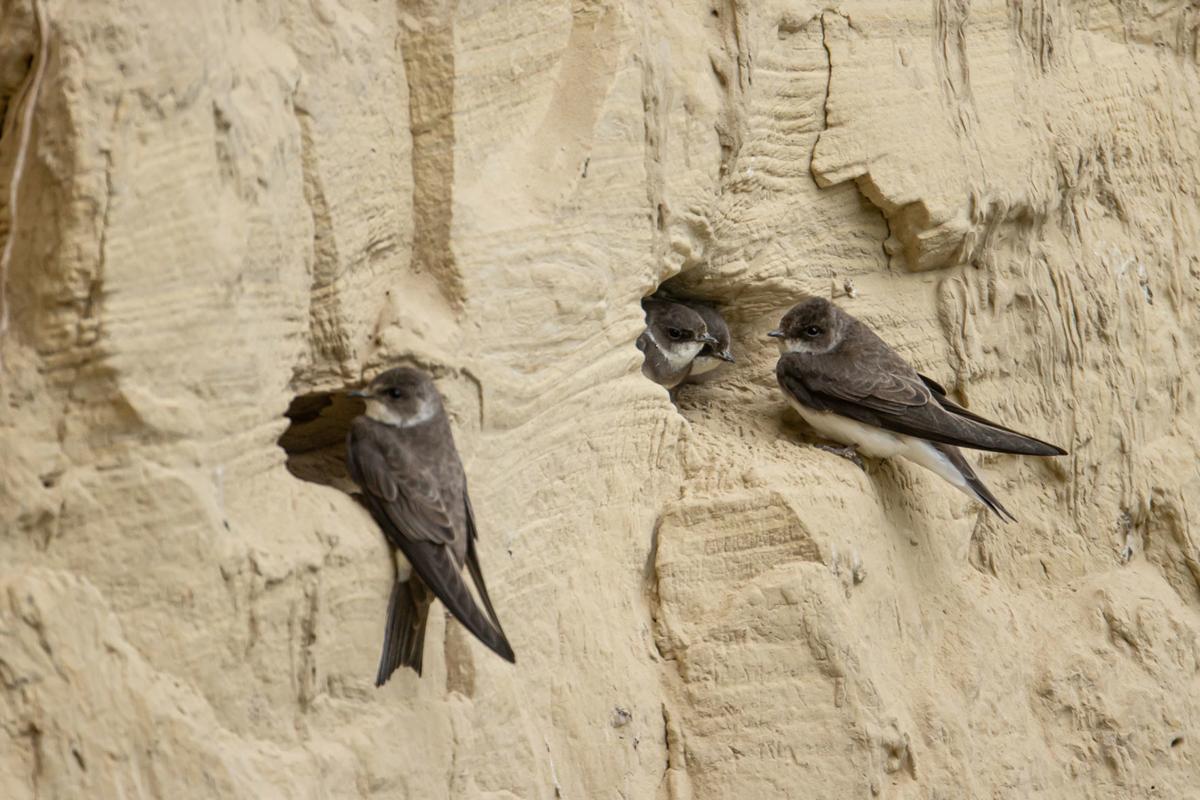 Like all swallow species, bank swallows are highly migratory and spend their winters in warm tropical places in South America.

In any profession there is often a lot of jargon and acronyms thrown around to express a point or to not use long cumbersome names.

In the bird world, there are a ton of these, such as GHO standing for great horned owl. In fact, there is an official abbreviation for all 10,000-plus species of bird in the world.

However, there is one particular abbreviation that I like to use while leading birding trips. That abbreviation is LBJ, and for those of you in my age category, I am not referring to Lyndon Baines Johnson, the 36th president of the United States. No, when I use the term LBJ for birding, it is meant to be a funny, catch-all phrase, that means, little brown jobbie, which describes just about any small brown bird.

I was recently photographing a bank swallow (Riparia riparia) nesting colony, which is a good example of an LBJ bird. These little brown jobbies really don’t have any outstanding colors or patterns. They don’t have a distinctive shape or flight pattern, so they are the quintessential LBJ.

For all their lack of physical characteristics, the bank swallow is a very remarkable bird. It is one of the most widespread birds in the world. They are found in the whole of Europe and the Mediterranean regions, along with North America, South America, Africa and the Indian Subcontinent. In these other regions they are often called sand martin or collared sand martin, however they are called bank swallow in North America.

Bank swallows nest in colonies of upward of several hundred individuals, and just like their name implies, they nest in small cavities in an earthen bank. This colony had perhaps 100-plus small cavities in a very tall bank. To capture some images, I needed to climb up the outside of the bank and look over the edge. Sounds simple enough, right? Fortunately, the hillside next to the bank was heavily wooded, but extremely steep. I had about 35 pounds of camera gear and a portable blind to drag along with me.

Thank goodness for the trees growing on side of the hill, because the ground was so steep that I needed to use the trees to wedge myself behind the tree trunks to stop myself from tumbling back down the hill. Once I got up high enough, I made my way over to the edge of the bank, which gave me a clear view of the nesting colony. I set up my fabric blind and wedged myself between the ground and a 8-inch diameter tree. The only thing holding me there was the tree. Without it I would have slide right down the hill.

Like all swallow species, these birds are highly migratory and spend their winters in warm tropical places in South America. I find it amazing that a 4-inch-long bird flies from the tropics of South America to northern states just to nest, raise their young, then turn around and fly back.

But what is really amazing is the fact that these tiny birds excavate their own nesting chamber. They need particular soil types to nest in and the colonies are almost always found near large bodies of water, such as rivers. I watched these delicate little birds land on the vertical face of an 80-foot exposed bank and using their tiny beak and feet they slowly scratch and claw at the soil. To me, it looked like this speck of a bird was trying to move a mountain.

Eventually, after several days of battling the mountain, they would have a slight depression where the bird could land and continue the monumental task of attacking the mountain. Eventually they will have a small cavity dug out where they can lay their eggs. The cavity ranges from several inches deep upwards of four feet deep. I just can’t imagine these delicate birds being able to move that much sand and dirt to excavate a cavity that is 4 feet deep.

At the end of their nesting chamber, the birds will gather up a few rootlets and a feather or two to make a nest. They will lay about four eggs before the female starts to incubate.

Bank swallows are insect eaters. They catch their meals on the wing, concentrating on the smaller insects such as gnats. They spend a large part of their day flying around catching food before returning to the colony. Each time I would watch them fly back to the colony I couldn’t help but think how amazing these tiny birds are.