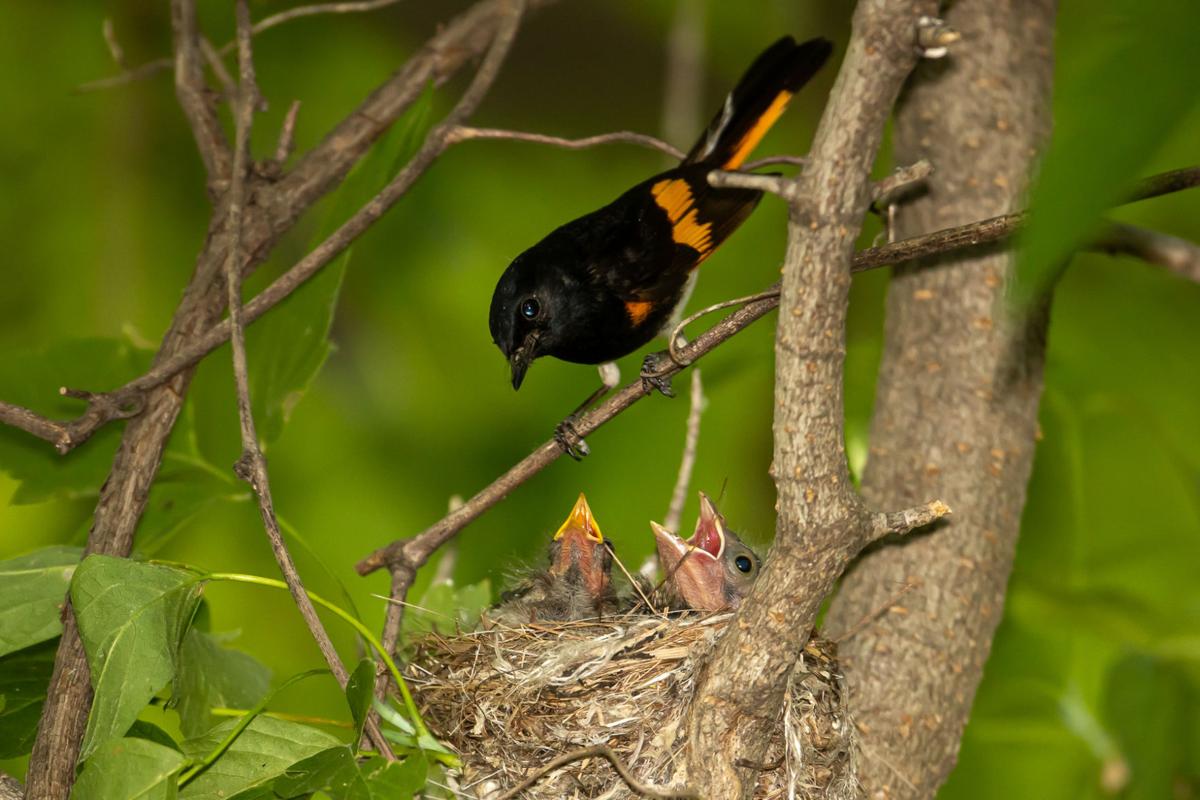 An American Redstart feeds its young.

The complexity of nature is sometimes hard to understand and even harder to justify or feel good about, especially when seen through the human lens. I was reminded of this the other day while filming a family of American redstarts (Setophaga ruticilla) that is nesting on my property.

While going for a walk I noticed a female northern cardinal scolding an eastern gray squirrel. The female cardinal was dive bombing the squirrel and driving it down a tree trunk and away from the area. I thought most likely the female cardinal was guarding her nest or her baby birds, so I thought I might look to see if I can find her nest.

While searching around the tangle of trees, vines and shrubs I felt that I was being watched. With just a little more searching I found the eyes that were watching me. A female American redstart, a type of warbler, was snuggled down deep into her nest with just the top of her head peeking over the rim. She watched me work my way through and out of the tight vegetation. I made note of the location and thought I would come back and check on her in a few days.

The American redstart is a common warbler species that can be found throughout the eastern half of the country, most of Canada and parts of the Rocky Mountains. Its species name comes from the Latin “rutilus” which means red and “cilla," which means tail. Both refer to the male’s red tail. The common name “redstart” comes again from the color of the male’s tail and “start” which is an Old Word name used for tail.

Redstarts are small warblers measuring only 4-5 inches long and most of that is the tail. The breeding males are jet black with orange (not red) marks on the sides of the tail and on each shoulder. Females are a gray version of the males.

When I first arrived a couple days later, I could see the chicks had hatched and the parents were busy feeding the eager mouths poking out of the nest. I set up my tripod and 800mm lens and camera. Using the longest made lens allows me to stand far enough away from the nesting birds to not disturb them, but give me the reach to capture some great close-up images and film the action and the feeding of the young birds.

As I stood and waited for the adults to return and feed their chicks, I could see the babies where tightly packed into the nest, but I could not make out how many young where in the nest. I could hear the male sing his song a short distance away when suddenly the female appeared at the rim of the nest with a beak full of juicy insects.

Right away I could see something wasn’t right. Only two heads popped out of the nest to get fed and one of the chicks was much larger and had an extremely large mouth. Also, I could see the lining of the larger chick’s mouth was bright red. This all means that the larger chick was not a baby American redstart but rather a baby brown-headed cowbird.

A cowbird baby in the nest means the host young will not survive. In this case it looks like only one of the redstart babies has survived. Over the next couple of days, I studied and filmed the feeding behavior as the parents brought in food every 10 to 15 minutes.

Most people’s sense of fair play is violated when they see or learn about the tactics of the brown-headed cowbird. However, the avian biologists in me finds this process fascinating.

The cowbirds are a native species of bird that has developed a successful strategy for reproduction. You can’t fault them for that.