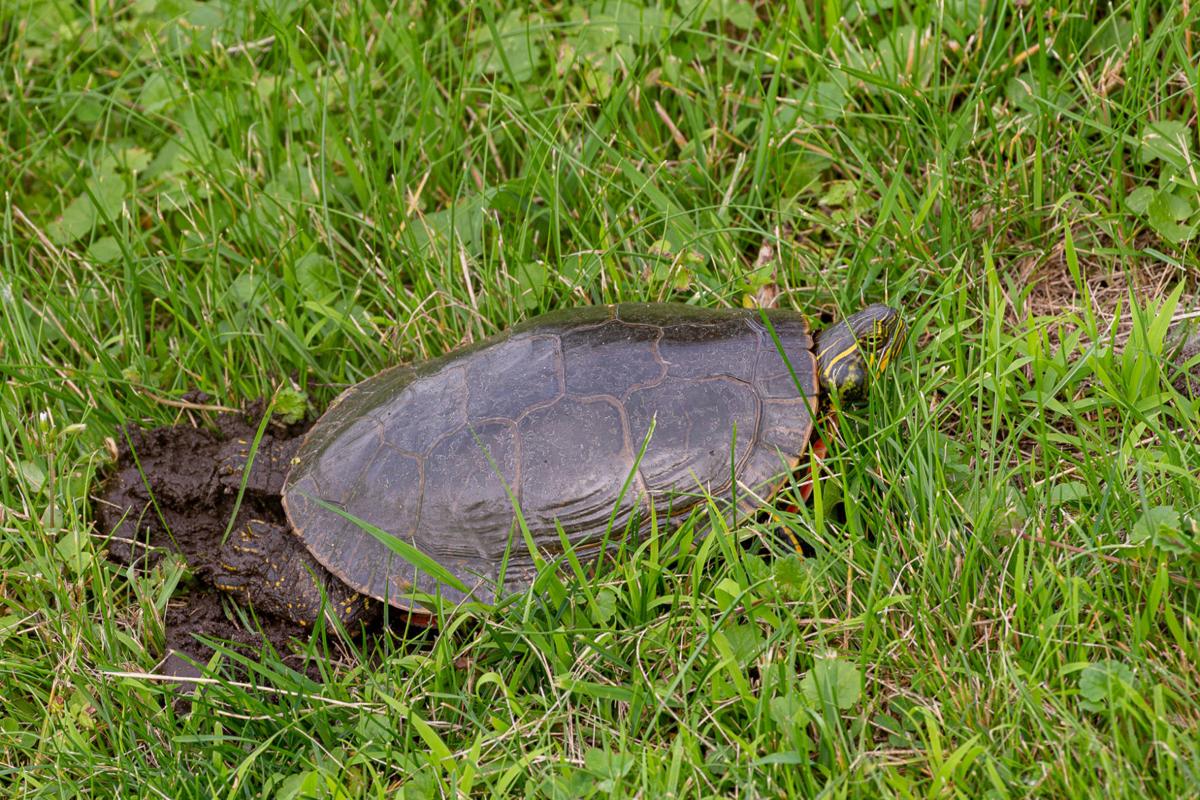 I often find the most interesting things in nature are the most mundane aspects of nature. For example, I am sure many of you are seeing turtles crossing roads or perhaps crawling across your yard. Why do these reptilian friends do this at this time of year and not at other times? Where are they going? Perhaps a turtle convention or migration?

The answer to the wandering turtles is relatively simple. Nearly all the turtles you see out and about at this time of year are females who have already bred and are looking for a place to lay their eggs. Turtles are a type of reptile. Most, but not all, reptiles reproduce with eggs. Over the past couple of weeks, the male and female turtles had a brief encounter while on the surface or under water for mating. Afterwards, the female strikes out on her own to search for a place to lay her eggs. And this is the reason why you are seeing turtles wandering around.

While on the surface of things, you might think the turtles are just wandering around with no real plan, but you would be wrong. Female turtles can travel upward of a mile from the lake or wetland where they live. She is searching for a very specific spot to deposit her eggs. First the soil must be loose enough to allow her to dig a nesting chamber, which can be upwards of six to eight inches deep. Again, sounds simple enough but what you are not considering is, she digs this chamber with her back legs, which means she never sees the nest with her own eyes.

The nest must also be dug in a place with sufficient sunlight because it’s the sun’s energy that heats the ground which in turn heats the eggs for incubation. So, choosing the right site is critical. Now for the really cool stuff. It varies among turtle species but depending upon the temperature the eggs are incubated at will determine if the hatchlings are all male or all female or a mixture. Eggs that are incubated above 88 degrees Fahrenheit all develop into females. Eggs incubated below 82 degrees Fahrenheit are all males. The sweet spot is between 82 and 88 degrees where a mixture of male and female turtles is produced.

I find this relationship between temperature and the sex of the offspring incredibly interesting. How did this come about and how does it serve the advancement of the species? These are interesting questions.

In many species, the females doesn’t become sexually mature until they are at least 10 years old and many have a lifespan of 50 or more years. At this time of year, only the mature egg-laying females are out crossing roads or traveling great distances. Every year thousands of mature female turtles, often carrying a full clutch of eggs are killed while crossing roads. The worst part of this, it took a very long time for these female turtles to mature enough to breed, so every one that is killed really sets back the species.

Turtle nest predation is a huge problem. It is estimated that about 90% of all turtle nests are predated, and all the eggs are eaten. This means that 90% of all the turtle eggs that are laid are dug up and eaten by predators such as raccoons, skunks, foxes and such. At first you might be alarmed at this fact but keep in mind that turtles have been around for about 200 to 300 million years. Modern day turtles have been around for about 66 to 100 million years and getting their nests predated is nothing new and yet the species is still surviving. So the ten percent that survive is apparently enough to keep the species going.

So, there you have it. The great turtle question has been answered. You can help your local turtles by safely guiding them across a roads, keeping the family dog or cat away from the turtles when they are laying eggs, or protecting the nest after the mother has laid her eggs. There are a ton or resources online to learn more about what you can do to help your local turtle.