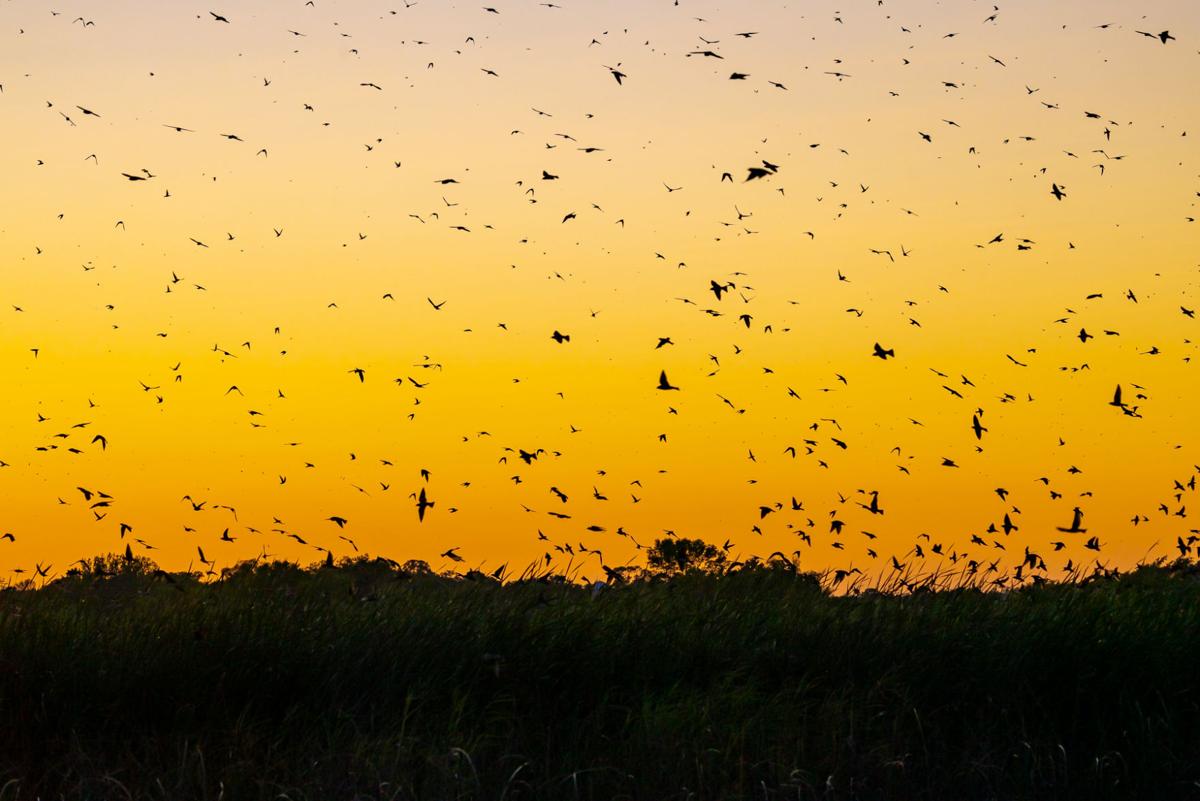 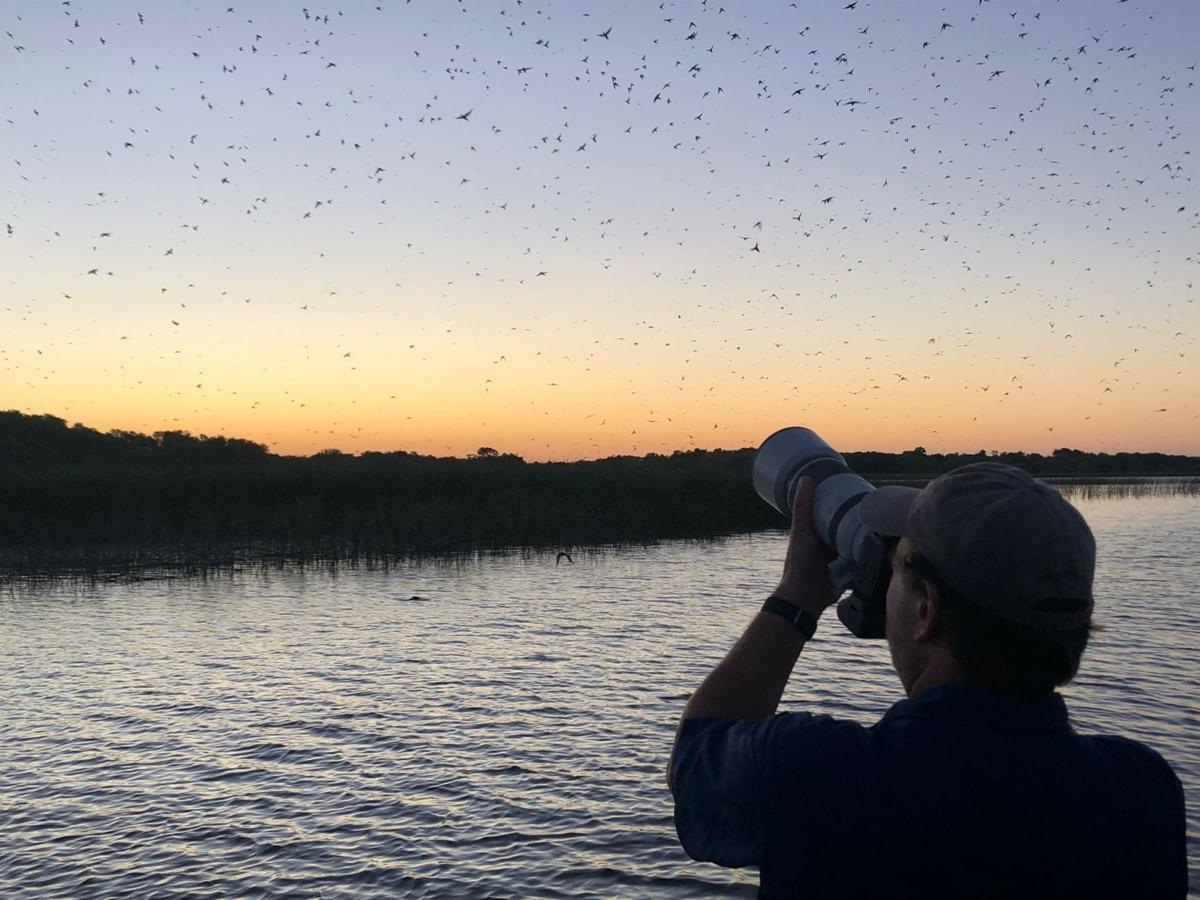 Naturalist Stan Tekiela photographs the migration of purple martins out of Minnesota. “The pictures don’t do it justice, but the memory will last a lifetime,” he said.

Naturalist Stan Tekiela photographs the migration of purple martins out of Minnesota. “The pictures don’t do it justice, but the memory will last a lifetime,” he said.

I am no stranger to traveling hundreds or even thousands of miles to see, study and document some of nature's most wonderful events. For over 35 years I have traveled to see the epic migration of sandhill cranes in Nebraska, stunning flocks of snow geese in North Dakota and remarkable monarch butterflies in southern California and the list goes on and on.

But over the past couple of weeks, I haven’t had to travel very far to see a spectacular natural occurrence. This natural event has been within an hour or two of my home in Minnesota. And what's even better, it’s a natural event I had never seen before — the gathering of thousands of purple martins for an evening roost before migrating south.

Purple martins are the largest member of the swallow family in North America. As is the case of many birds, its common name isn’t very accurate. The males are not actually purple but rather a blackish-blue. The males’ feathers are iridescent and when seen in bright sunlight they look navy blue and sometimes green. Females are mostly gray with brownish wings. The name martin comes from French and British pet names and refers to a diminutive of Mars. Pet names were often assigned to familiar backyard birds or as the British like to say, “dooryard” birds.

Martins freely breed across the eastern half of the United States and up into parts of central Canada. There are a few separate populations that breed in California, Arizona and New Mexico but mostly they are an eastern species of bird.

And now for one of the more amazing facts about martins: They nest in colonies, which means they are nesting in groups of 10 to 100 pairs of birds. All of this nesting takes place in human-made nesting structures. That’s right, they only nest in human-made apartment style or individual nesting gourds that are put out by people. They don’t nest in the wild.

The human-avian relationship is considered synanthropic, which means that the birds have greatly benefited from living in close proximity to people. Over the past couple hundred of years the martins have made a complete transition from nesting in the wild to being totally dependent upon and benefiting from people who provide homes for nesting. I am one of those people who provide nesting boxes for martins. For the past 20 years I have dozens of purple martins nesting just 30 feet from my house in the housing I provide for them.

Each spring I look forward to my martins returning. They are such talkative birds and I really enjoy hearing them. But at the end of the nesting season, in late summer when all the martins have left my colony, the silence is nearly heart-breaking. But this year, I was fortunate enough to extend the martin season by a few extra weeks by seeking out their evening roosting spots.

They gather in large flocks in preparation for migration. These flocks can number in the thousands. Martins are long distance migrators. In late summer, huge flocks gather and slowly move southward. Small flocks join larger flocks until tens of thousands of martins are migrating south with a destination of the Amazon basin in South America.

When they gather in the evening or when leaving in the morning, the movement of all these birds at the same time is often observable on local Doppler radar. Several of my friends work together to watch the Doppler radar for signs of the martin activity and then go out to find these night-time roosts.

After visiting one large roost in central Minnesota, I returned a week later with my own boat to see and photograph the gathering of purple martins. In just one week's time the number of martins coming to this roost had more than doubled.

Arriving just before sunset, I launched my boat with great anticipation and anchored right next to a large stand of cattails. About 20 minutes after sunset, I could see the first few martins flying into the area.

Then slowly, over the next 20 to 30 minutes, hundreds, then thousands, of martins gathered in the airspace above my boat. The sight and sound of this many birds is unbelievable. The constant swooping and swirling of the birds against the orange glow of the setting sun was breathtaking and hearing that many martins calling warmed my heart.

My camera was in high gear as I attempted to capture the gravity and grandeur of the natural event unfolding above me. Then all the birds gathered high in the sky and then dropped like rain drops into the cattail marsh. Now the sky was empty, and the birds were quite. Of course, the pictures don’t do it justice, but the memory will last a lifetime.

"The constant swooping and swirling of the birds against the orange glow of the setting sun was breath-taking and hearing that many martins calling warmed my heart."