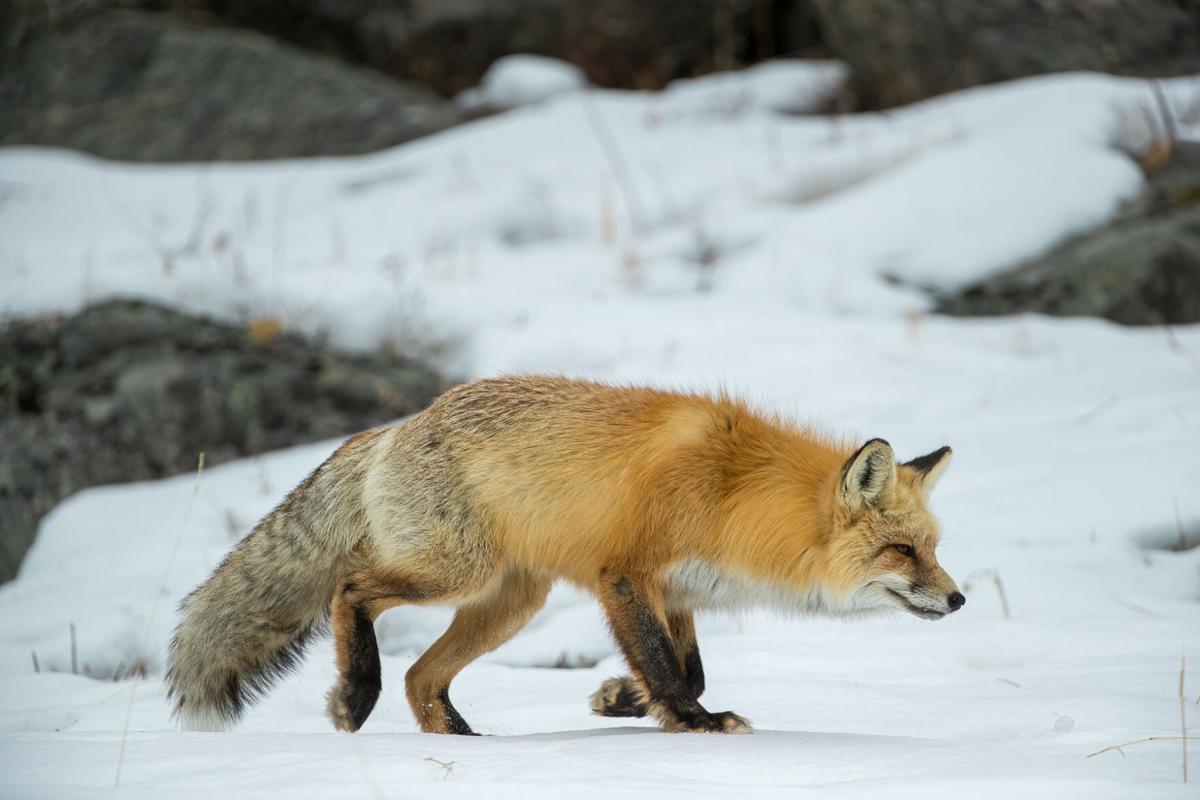 The best way to tell a red fox from the similar looking gray fox is in the tail — red fox have a white tip of the tail, gray fox have a black tip.

Winter can be a challenging time for wildlife, especially when deep snow blankets the land and the wind blows bitterly cold. Birds fluff up their feathers and search high and low for anything to eat. Squirrels are extra plump and fuzzy and dig down through the snow in hopes of finding a forgotten acorn.

But for some critters, winter is a time of plenty. Owls, such as the great horned and barred owl, do well in the winter weather conditions. The nights are extra long, giving them ample opportunity to hunt while the snow cover gives the mice and voles a false sense of security from the avian predators above.

The red fox (Vulpes vulpes) is one of those critters who does well in winter conditions. In preparation for winter, foxes grow an extra thick undercoat of fur, which covers their entire body. In addition, they grow extra fur on their paws that helps with the snow and ice. They also pack on extra fat for the winter, which acts to both keep them warm as an insulating layer and also gives them energy when food becomes in short supply.

Another adaptation used by foxes to survive winter is a heat exchange arrangement in their legs. The warm arterial blood coming directly from the heart runs right alongside the cool venous blood returning from the paw. The heat of the body is exchanged from the arteries to the veins before it gets a chance to be lost to the environment through the paws. This means the paws are kept at a lower temperature than the rest of the body and minimizes heat loss from the paws that are in contact with the ground.

No doubt, the red fox is the most widely distributed member of the canid family (dogs). They can be found throughout the entire northern hemisphere around the globe, including North America, nearly all of Europe, and Eurasia.

The red fox has been associated with humans for thousands of years, which has led to it being introduced to many parts of the world where it hasn’t existed before. Most recently to the continent of Australia where it is now considered an invasive species.

Even though they are called red fox, they come in a wide variety of colors — not just red. They range from the classic rusty red to nearly all black. When nearly black they are often called a cross fox. The name comes from a black dorsal stripe (down the middle of the back) that intersects, or “crosses,” with a black mark at the shoulders.

The male and female red fox are similar in size with the male being about 10-15% larger. This is often not enough to notice the size difference. An adult red fox weights between 10-25 pounds. This is much smaller than your average domestic dog.

Red Fox have excellent eyesight and keen hearing, not to mention their amazing ability to smell. They usually hunt small mammals such as mice, voles and shrews, along with small birds.

Typically, a fox will hunt by walking along, watching for any movement. But in the wintertime, they are mainly listening. They keep their head down scanning back and forth. If they find something they stop and cock their head from side to side, pinpointing the exact location of the prey under the snow by listening.

When they have locked onto the sound, their hind legs coil up like a spring and they launch themselves into the air following an arch-shape trajectory coming down with their front paws and nose hitting the surface of the snow first, plowing through the snow to reach the hidden critter below. It is really a sight to be seen. I’ve seen it time and time again and it’s still thrilling to witness.

So, this winter keep your eyes open for the red fox surviving winter.

"Over the years I’ve seen crows with one white wing, a robin with a white head and a red-tailed hawk that was pure white with just a hint of rusty color in its tail."