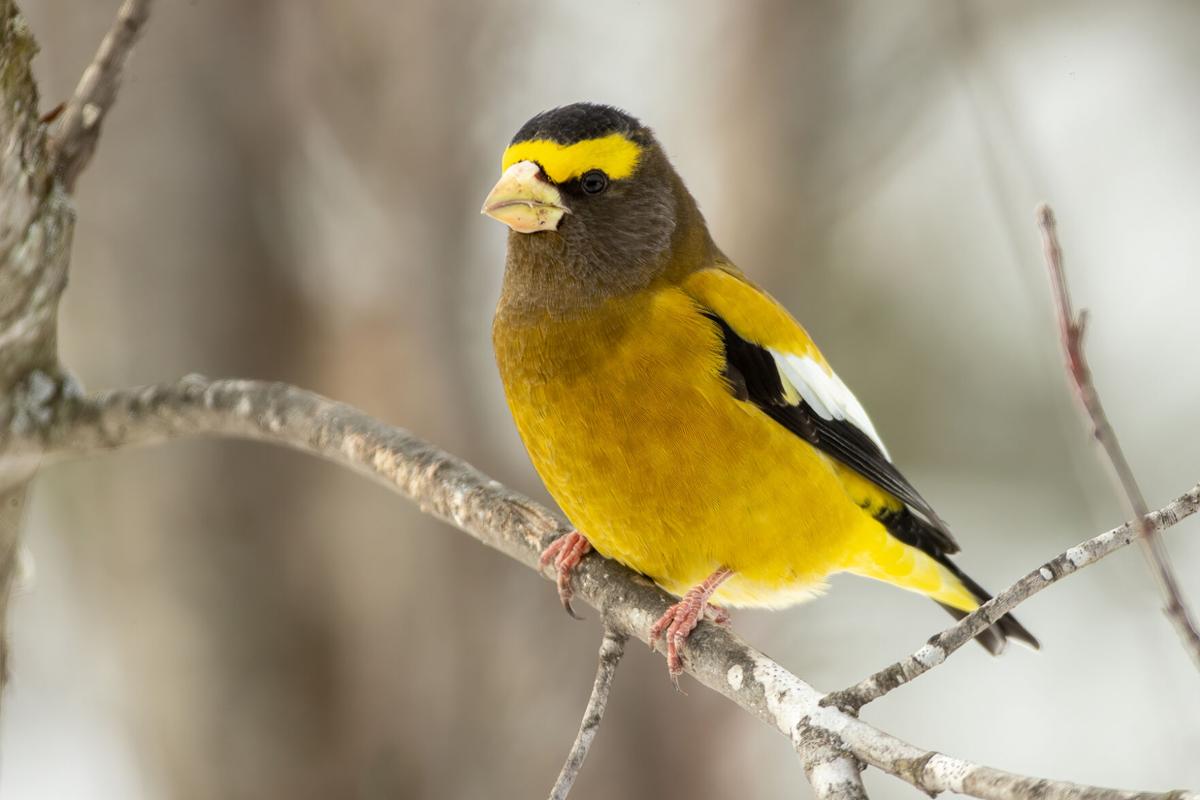 One species of bird that has a well-documented decline over the past 50 years is the evening grosbeak. This bird use to be a common winter-time visitor to feeders throughout much of America each winter.

Nothing in nature ever stays the same. It is a mantra that I find myself telling people more and more. We expect nature to always be the same.

Worse yet, we tend to look back at the “good old days” and remember how great things were and lament of how things are now. This is an innate human behavior that manifests itself in unrealistic expectations of past wildlife populations. We seem to expect peak wildlife numbers all the time with none of the down swings.

It is important to understand that nature is dynamic and is in a constant state of flux. It’s how nature works. Think of it as the ebb and flow of life. As one part of nature contracts or reduces there is always something else that is expanding and increased. Take this winter’s increase of snowy owls into some of our northern states. In recent years we have learned that when snowy owls irrupt it is because of an abundance of food last winter and female snowy owls produces more owlets in the spring.

Consequently, the following winter many young snowy owls irrupt out of their home range and into areas they are not normally found, such as this winter.

On the other hand, there are some species that have increased or decreased without such a clear reason. The red-bellied woodpecker is a good example of a species that has really expanded. Thirty years ago, this bird was not very common. Now it inhabits most backyards, parks and any woodland throughout the eastern half of America. Why such a big increase in population is hard to say.

On the other side of the coin, the red-headed woodpecker (a very similar species as the red-bellied woodpecker) has declined dramatically in all regions. In fact, in many parts of the country the red-head has completely disappeared — a term called extirpated.

Areas where I use to see and photograph red-headed woodpeckers haven’t had a single woodpecker in many years. Again, why this is, isn’t clear. You might be tempted to say it’s a loss of habitat, but how does that explain the ever increasing red-bellied woodpecker, which is similar size, shape and requires similar habitat and is doing great?

The reason for a species sudden decrease or increase in population are not a simple. I don’t believe you can point to just one reason for the decline of a given species. We people are always looking for something or someone to blame. We want to point our fingers and proclaim a villain.

Rarely in nature does anything happen due to just one reason. Usually, it’s a combination of factors and when an unseen threshold is reached, the trigger is tripped, and the population falls.

One species of bird that has a well-documented decline over the past 50-plus years is the evening grosbeak ( Coccothraustes vespertinus). This bird use to be a common winter-time visitor to feeders throughout much of America each winter.

Now feeders that use to host hundreds of these birds now may only see a handful every ten of years or so. The decline of this bird has been well documented in the National Audubon Society’s 121-year-old Christmas Bird Count (CBC) tabulations.

The evening grosbeak nests in remote regions of central Canada and a handful of northern states but irrupts out of these regions in winter. Since much of the breeding range of the evening grosbeak is inaccessible, winter surveys like the CBC provide the best indicator of the health of the species. Evening grosbeak numbers were stable or increased until 1970 when their numbers began to decline significantly.

The decline of evening grosbeak between 1970 and 2010 was significant which indicates that there is less than one chance in one thousand that the decline in evening grosbeak numbers was due to random fluctuations in abundance. The evening grosbeak has the honor of being the species with the steepest population decline (over 90% since the 1970s) of all land-birds in the U.S. and Canada.

The cause of the decline in evening grosbeak numbers is unknown, but there are several possibilities. The most obvious is the habitat of evergreen forests that evening grosbeaks requires is being clear-cut logged.

The declines might also be related to food availability. Hardwood tree seeds, a favorite natural source of food of evening grosbeaks, may be less common due to broad-scale changes in forestry practices in Canada. The wide-spread use of pesticides to kill insects may also be contributing to their decline because evening grosbeaks feed their young a diet of insects. It’s most likely a combination of factors that is leading to their remarkable decline and push towards extinction.

I was thrilled to recently have a chance to capture a few images of this disappearing bird. Who knows, this bird might even go extinct in the not-so-distant future.

"Rarely in nature does anything happen due to just one reason. Usually, it’s a combination of factors and when an unseen threshold is reached, the trigger is tripped, and the population falls."