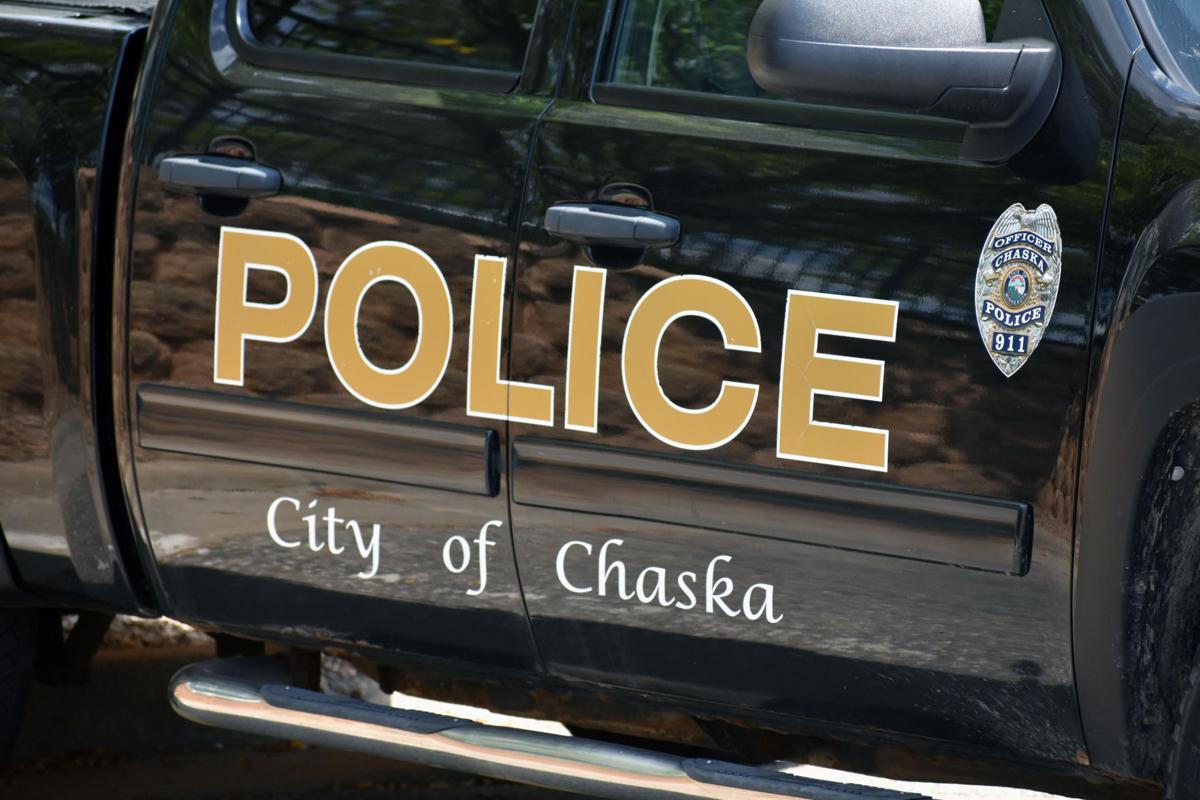 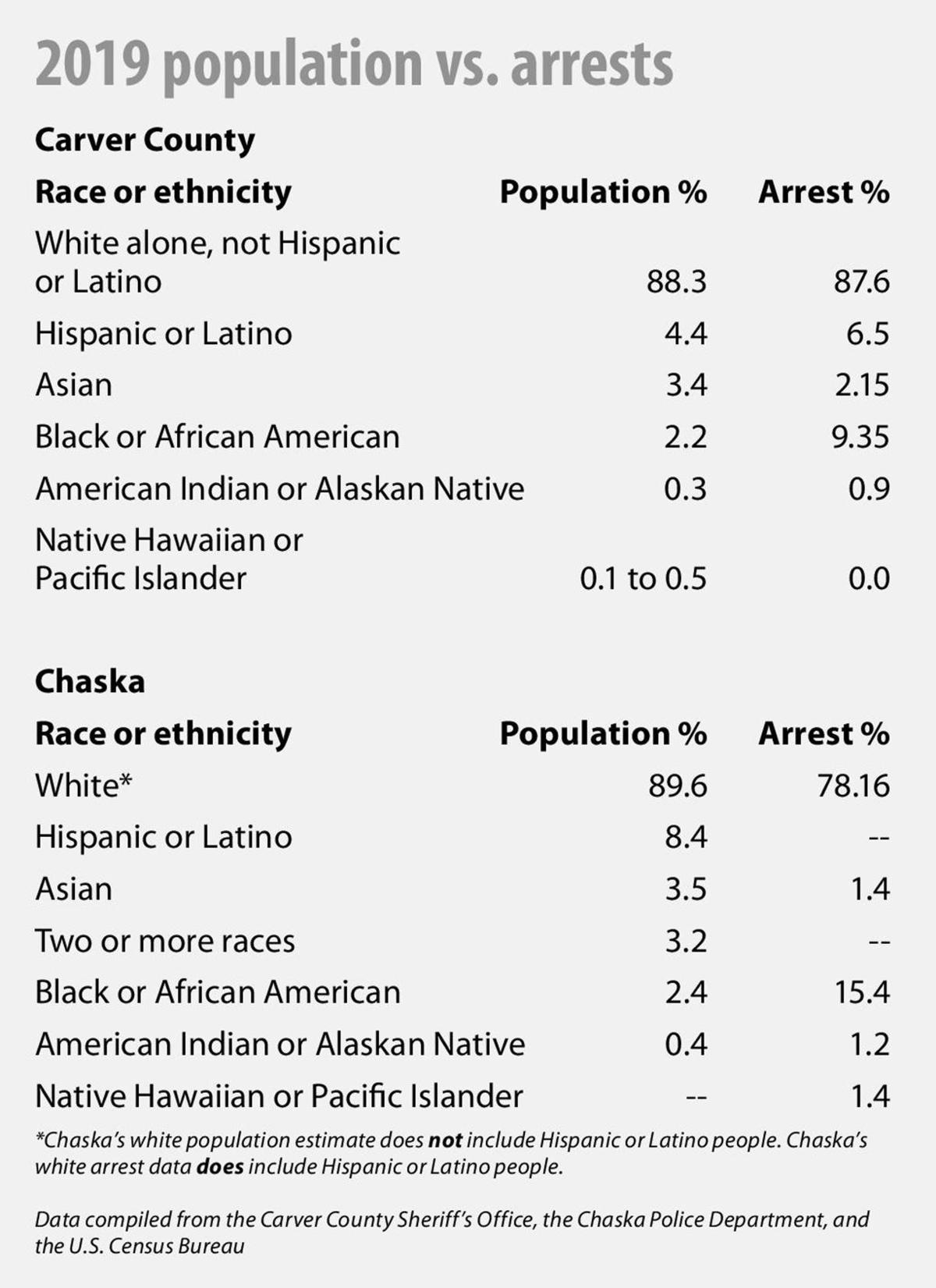 People from plenty of backgrounds call Carver County home, but some have more space on the pie chart than others.

When compared with how often people were arrested by Carver County Sheriff's Office deputies, the proportions don't match.

Around 9.35% of arrests were those of Black people, according to requested county data. That’s over four times proportionally higher than their county population.

Reversely, white people made up 87.6% of arrests in the county, comparable to their 88.3% population.

The newspaper asked Carver County Sheriff Jason Kamerud what he made of these numbers.

“It’s tough to make a pattern assessment based on arrests,” Kamerud said. “It assumes even distribution.”

Not everyone arrested was from Carver County, so that could skew the data, depending on who drove through the county that day, he said.

Chaska Police Chief Ryan Siebert had a similar sentiment. When seeing those numbers for the first time, they can seem staggering, he said.

“I can understand how somebody feels. There’s that disproportionality with the data. But when you start peeling back the layers of it, you see the complexity of the situation,” he said.

Black people made up 15.4% of arrests that year, over six times proportionally more than their population. Asian arrests (1.4%) and American Indian or Alaskan Native arrests (1.2%) were more congruent with population.

On the other hand, white people made up 78.2% of all 2019 Chaska arrests. ("White" arrests in Chaska include Hispanic and Latino arrests, according to the records department.)

WHAT IS AN ARREST?

Siebert echoed Kamerud’s response, saying the data is too complex to view at face value.

Siebert said arrest data includes all forms of arrest activity: Both when someone calls to report and officers respond, or when officers initiate arrest.

In 2019 "arrests" involving Black suspects, Siebert said 94.6% originated through calls to the department. Just five of those were officer-initiated through traffic stops, he said, or .09%.

The intricacy doesn’t stop with percentages. It bleeds into vocabulary, too.

“We hear 'arrest' and of course we think of handcuffs and people going to jail (but) it’s a lot more complex than that,” Siebert said.

To break it down even more, “citations” and “arrests” might be categorized differently while reporting.

“There is likely some statistical overlap between citation and arrest data,” Siebert said. “It all depends how it’s coded in the system,” per state and federal protocol.

When someone is pulled over, does it matter what city they live in when accounting for race data?

Siebert and Kamerud say it does.

Siebert said just over half of Chaska arrests were actually for Chaskans last year, which could skew data.

And for the county, Kamerud said with so few arrests, it’s hard to come to a conclusion.

“I would expect the percentages to be reasonably consistent with the population makeup, but not necessarily a mirror image,” he said.

Kamerud said to describe these findings as “much higher interactions with people of color” isn’t accurate.

Take use of force, for example. Just over 120 people were arrested using police force last year. Eleven of those arrested were Black.

“Which in terms of percentages, is greater than the percentages of our population, but I don’t think these low numbers are very meaningful or helpful in assessing a pattern,” Kamerud said.

The county describes use of force as anything beyond a routine escort, beyond the elbow or wrist hold. The Chaska Police Department does not include race in use of force reports.

Amid ongoing widespread calls for racial justice in policing, some school districts and cities are calling for changes in the way police respond.

Kamerud said continued learning and review will be a part of deputies’ work and said there’s work to be done in the county office, though “not because of an identified problem.”

He also recognizes some in the community are at odds with law enforcement.

“Over the past several months I have been in conversations with constituents (of color) who have made it clear they do not feel their voices are being heard and they don’t believe they have a seat at the table,” Kamerud said.

In response, he put together a group to plan future community discussions.

He said it should help “ensure all voices are heard and that (the department is) providing services in a manner that ensures equal protection under the law for everyone in Carver County."

59% of police use of force occurred toward Black people in Minneapolis. That's around seven times the rate of white people, the New York Times reported in June 2020.

Black people were between 7.54% and 16.39% more likely to be arrested than a white person for Minneapolis low-level crimes in 2004 and 2012, according to the American Civil Liberties Union.