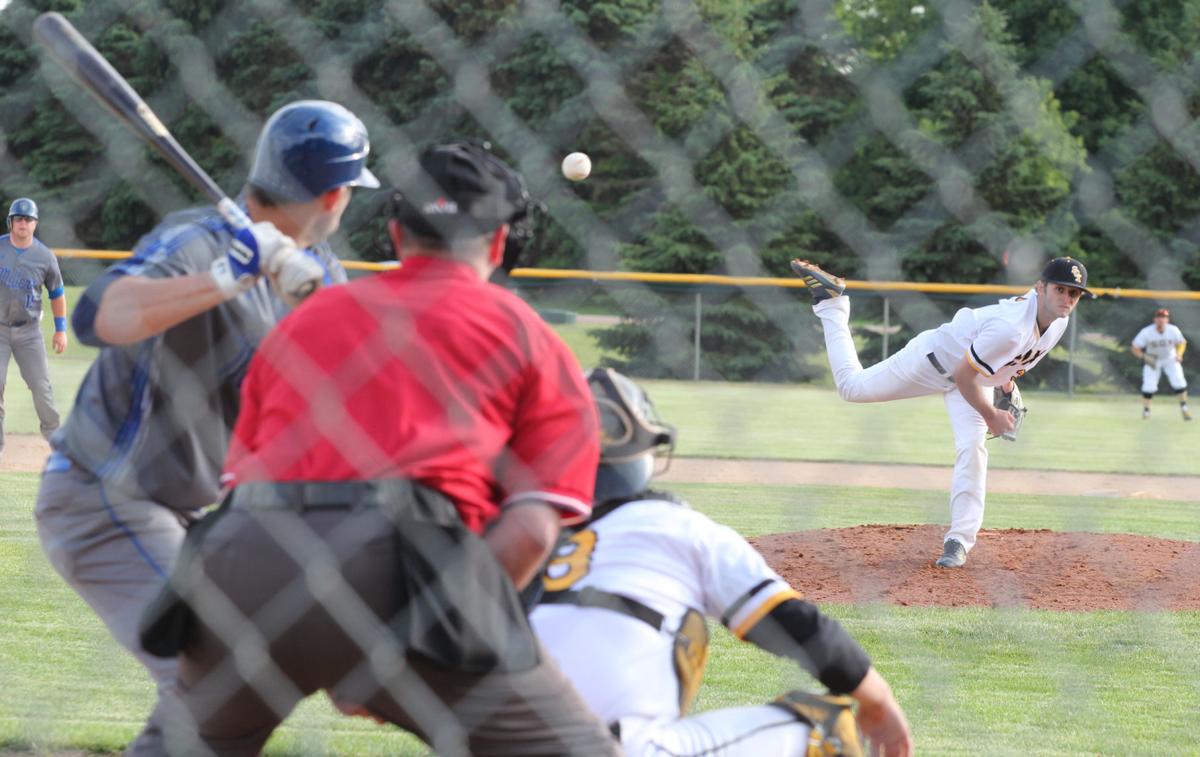 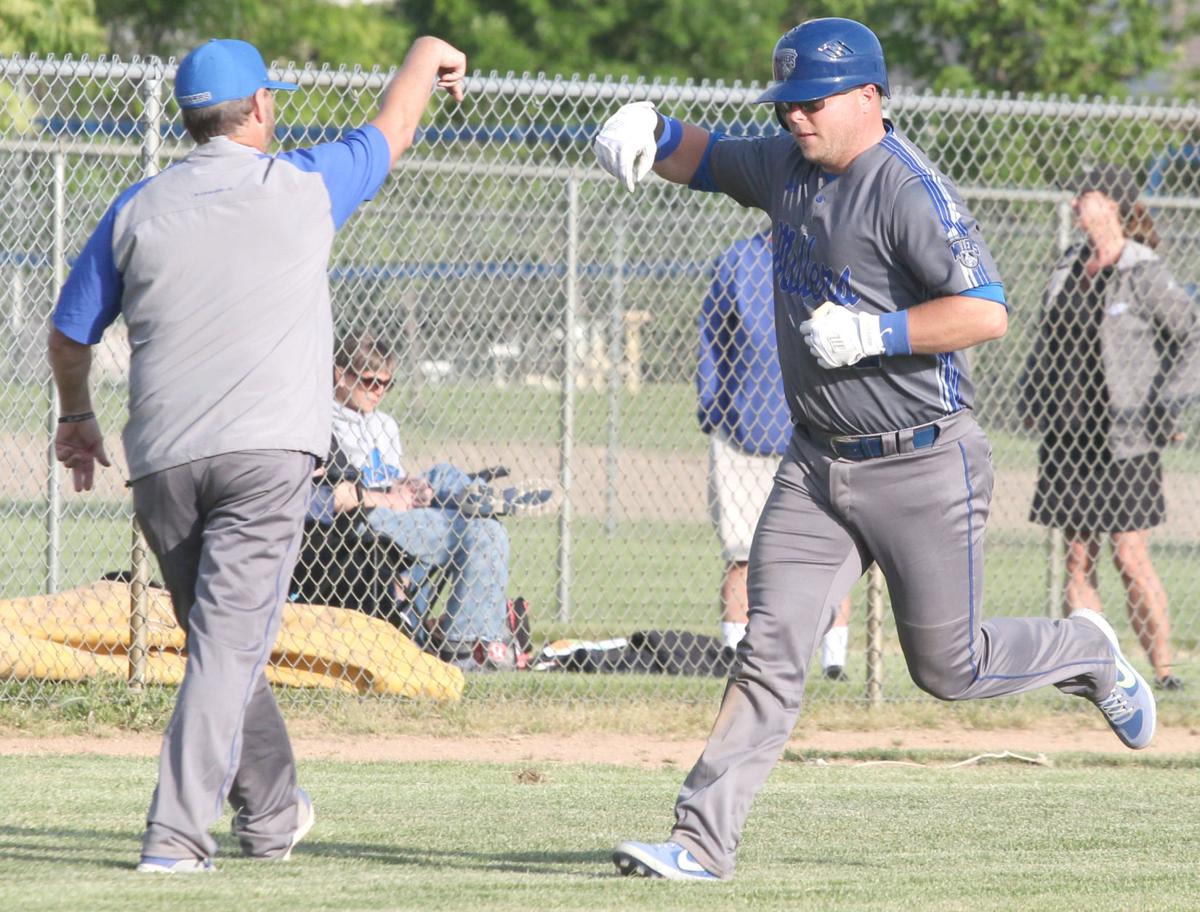 Minnetonka Miller manager Kevin Hoy and player Blaine Rutledge air high-five after a home run in an exhibition game in Carver on June 13. 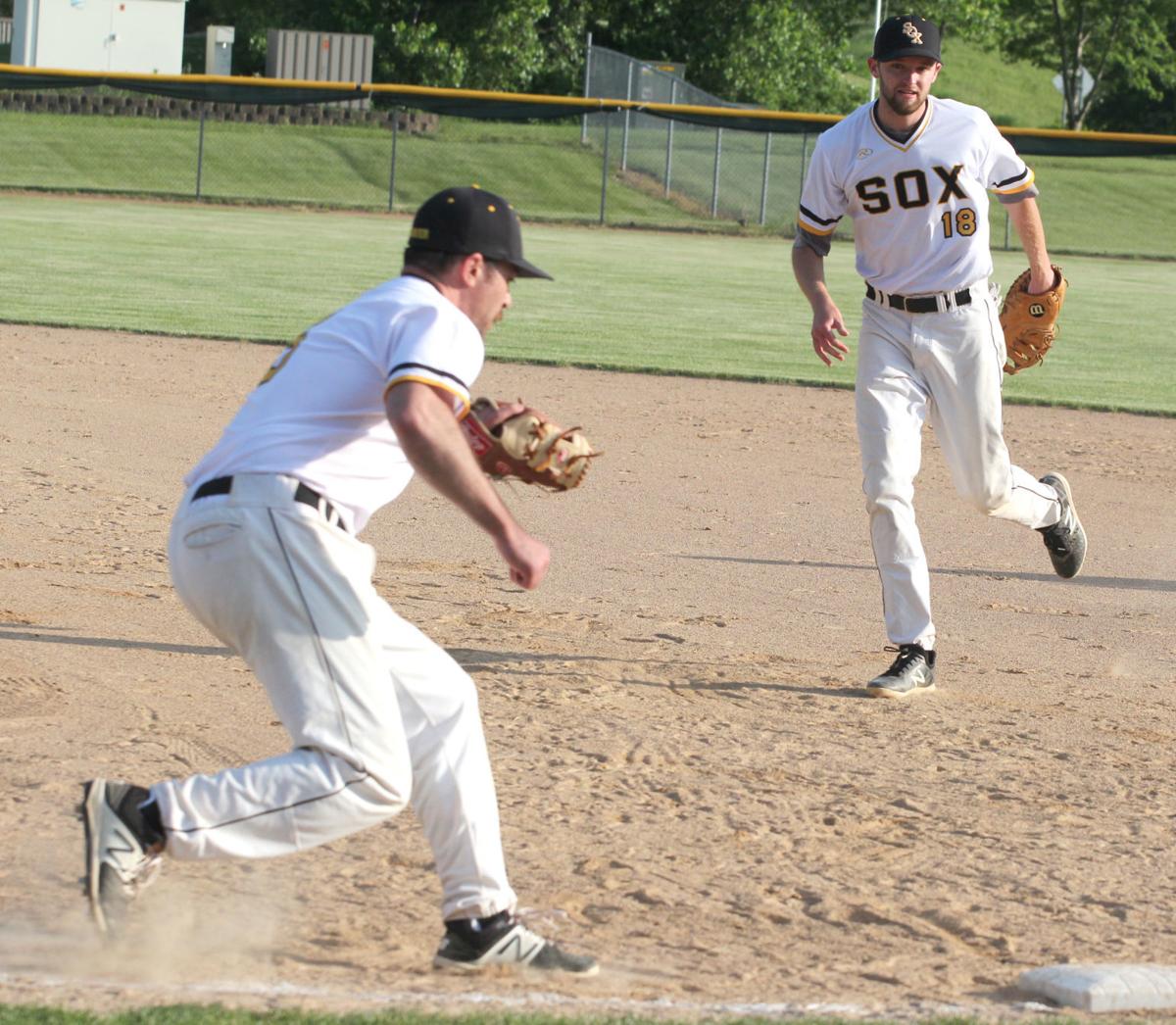 First baseman David Dolan flips the ball to pitcher Jay Bresnahan covering the base for Carver in an exhibition game against Minnetonka on June 13. 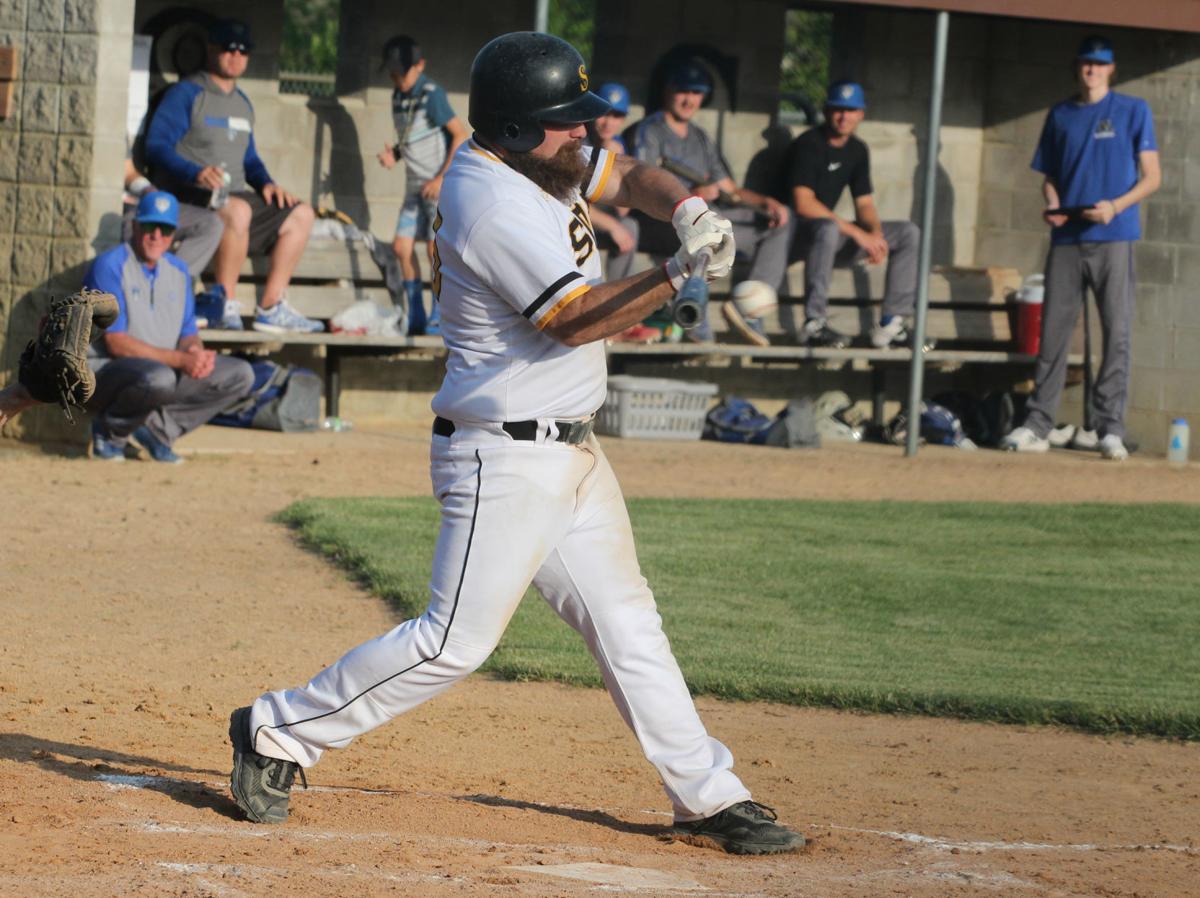 Dan Gastuch is back with the Carver Black Sox after a lay-off from the squad. 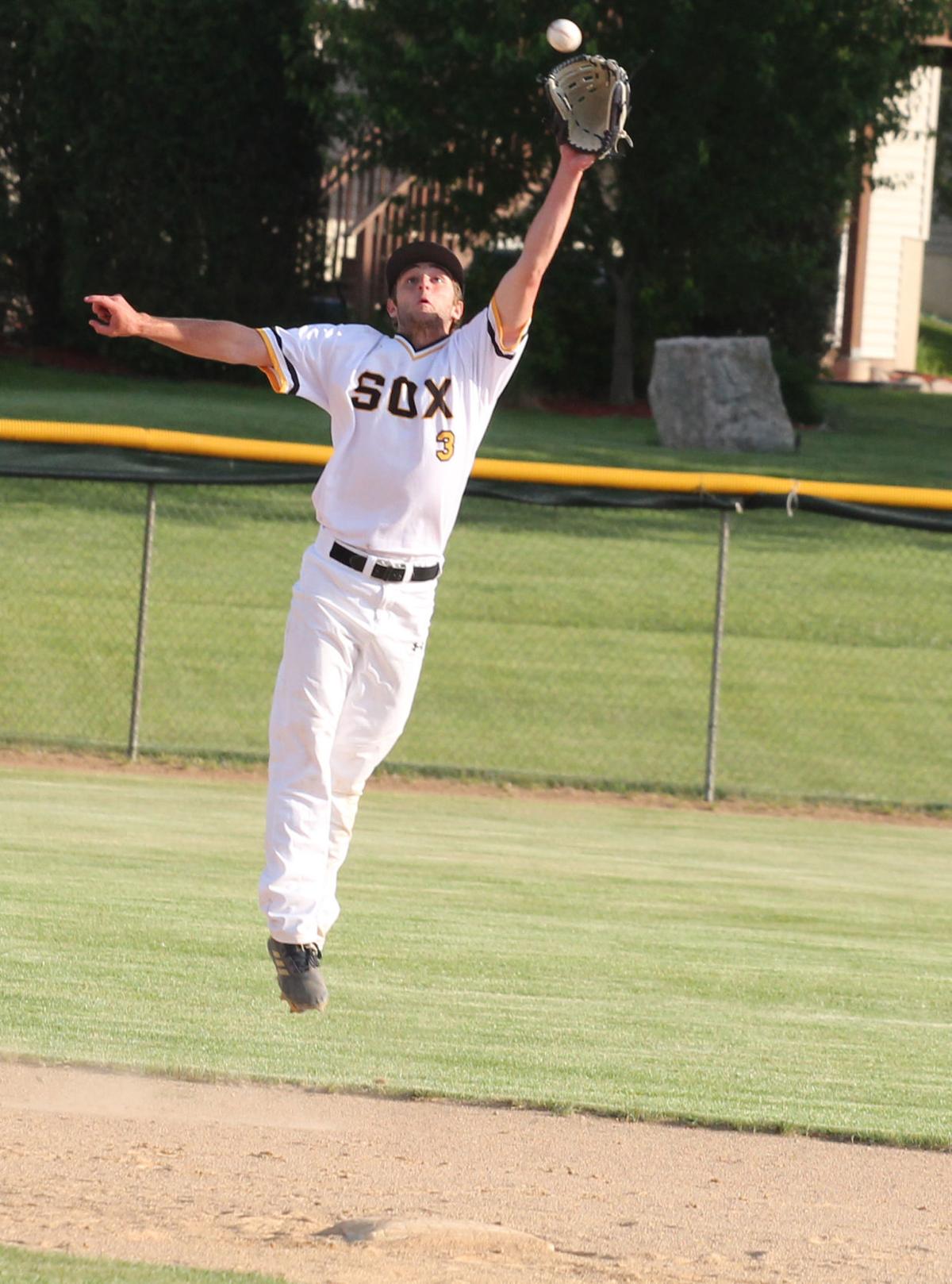 Wyatt Rudolf skies high to glove down a line drive, resulting in a force out at second base for Carver on June 13. 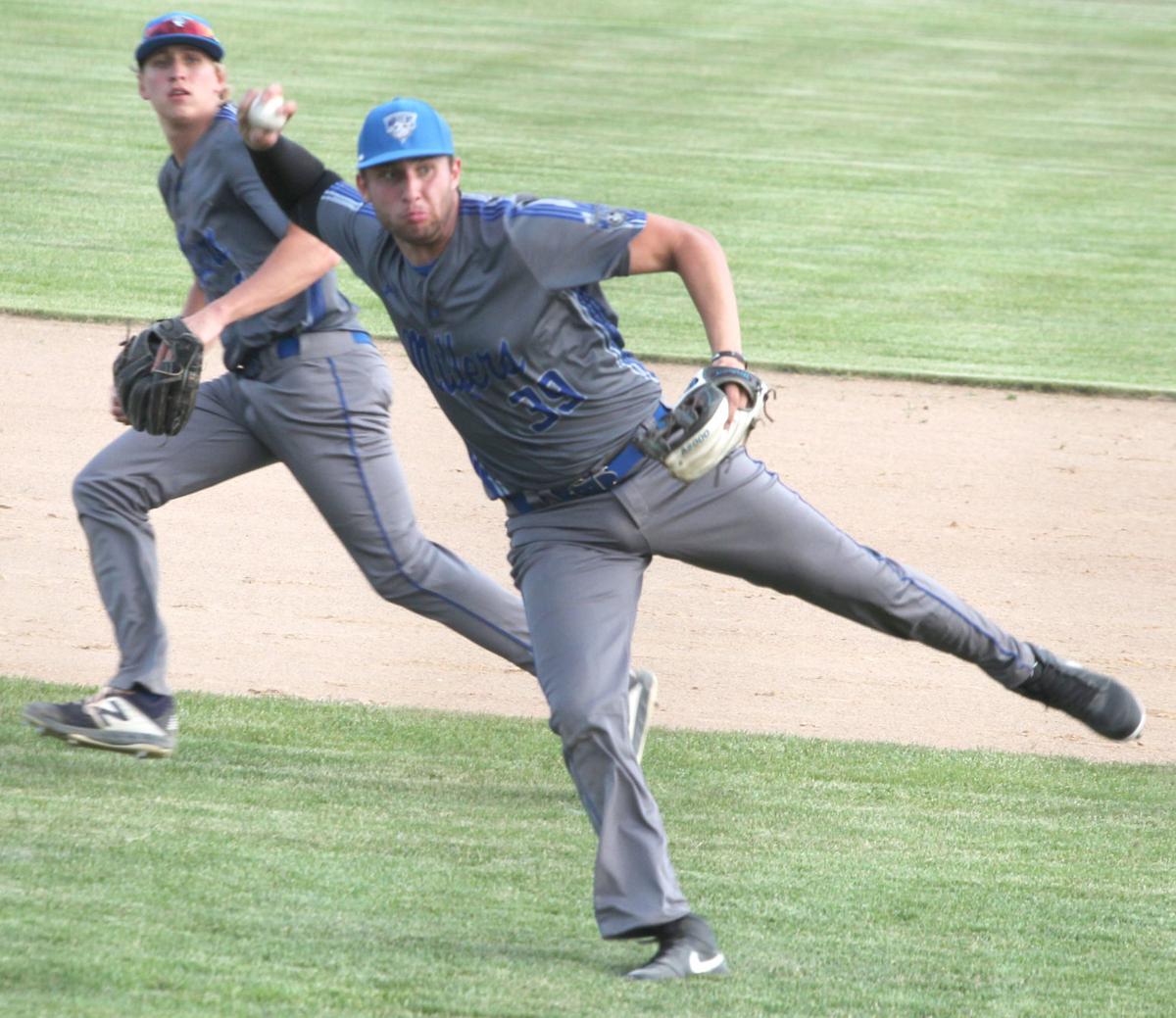 Minnetonka third baseman Mason Nadolney cuts in front of shortstop Jarod Wandersee for the putout to first base on June 13.

Minnetonka Miller manager Kevin Hoy and player Blaine Rutledge air high-five after a home run in an exhibition game in Carver on June 13.

First baseman David Dolan flips the ball to pitcher Jay Bresnahan covering the base for Carver in an exhibition game against Minnetonka on June 13.

Dan Gastuch is back with the Carver Black Sox after a lay-off from the squad.

Wyatt Rudolf skies high to glove down a line drive, resulting in a force out at second base for Carver on June 13.

Minnetonka third baseman Mason Nadolney cuts in front of shortstop Jarod Wandersee for the putout to first base on June 13.

The crack of the bat. The spikes making contact with the base. Chatter outside of the playing field fence. The argument between balls and strikes between the batter and umpire.

The sounds of baseball. And it was back June 13 in Carver.

When Minnetonka Miller slugger Blaine Rutledge hit a shot over the right-field fence, bouncing on to County Road 11, there were no teammates at home plate to greet him. There was of course an air high-five from head coach Kevin Hoy at third base.

When Carver pitcher Jay Bresnahan recorded the final out of the third inning, there were a few "atta-babies," but no contact.

A socially distant baseball game, or at least as much as one could hope for.

The exhibition was given the okay by the Minnesota Baseball Association despite the sport being classified medium-risk, a dial yet turned in the state by Governor Tim Walz and his advisors.

"The board has decided to move forward for teams to start playing exhibition and league games if they send an email to the MBA from one of the following.

The letter must state that they are insured and approving the use of their facility by their local town teams. The MBA is not authorizing the opening of concession stands; that must be approved by the governor or by the local municipality. ... Teams playing without permission will be subject to sanctions and or fines," the MBA directive said.

Carver and Minnetonka were among the first teams to play, a full slate of games opening the 2020 season in Stearns County one night earlier.

The exhibition was a clear example of what can be done to be socially distant responsible.

All players, coaches, umpire, and fans -- even media members such as this sports reporter, Star Tribune columnist Patrick Reusse, and Garage Logic producer Chris Reuvers, a Carver native -- were required to sign waivers upon entry into the park.

Have you had any of the following symptoms?

Shortness of breath? (Only when I run.)

New loss of smell or taste?

If you answered yes to any of those questions, admittance was not possible.

While some, such as myself, heard the little voice in their head joke around with some of the questions, the health checklist was no joking manner. It represented the health and well-being of everyone at the ball field, and it represented a way the Minnesota Baseball Association hopes to navigate through the rest of the summer season.

Don't follow the rules and the game could be lost again.

The announcer calling out names of the players. The sound of foot hitting dirt in a slide into second base. Children running around, chasing foul balls. All sounds that could be gone until 2021 if rules are not followed properly.

Roughly 50 of the 350 Minnesota Amateur Baseball teams have been cleared to host games as of June 15. Hamburg is the only other Carver County park listed thus far.

The Cologne Hollanders announced they will soon be able to host with the city council allowing the field to be open. Young America was given the go-ahead as well to play Wednesday at Wilkommen Park.

The two-time defending Class B state champion Chanhassen Red Birds are one of the teams looking for clearance, but as their home field is on high school property, General Manager Terre Kemble said the best bet may be to go to Lake Susan for the time being.

Chanhassen, which played an exhibition game at St. Patrick in Scott County on June 16, travels to Hampton in Dakota County on Sunday, June 21 at 7 p.m. and Cokato in Wright County at 7:30 p.m. on Friday, June 26.

Victoria played in Hamburg June 16 and will be at St. Bonifacius at 2 p.m. on Saturday, June 20.