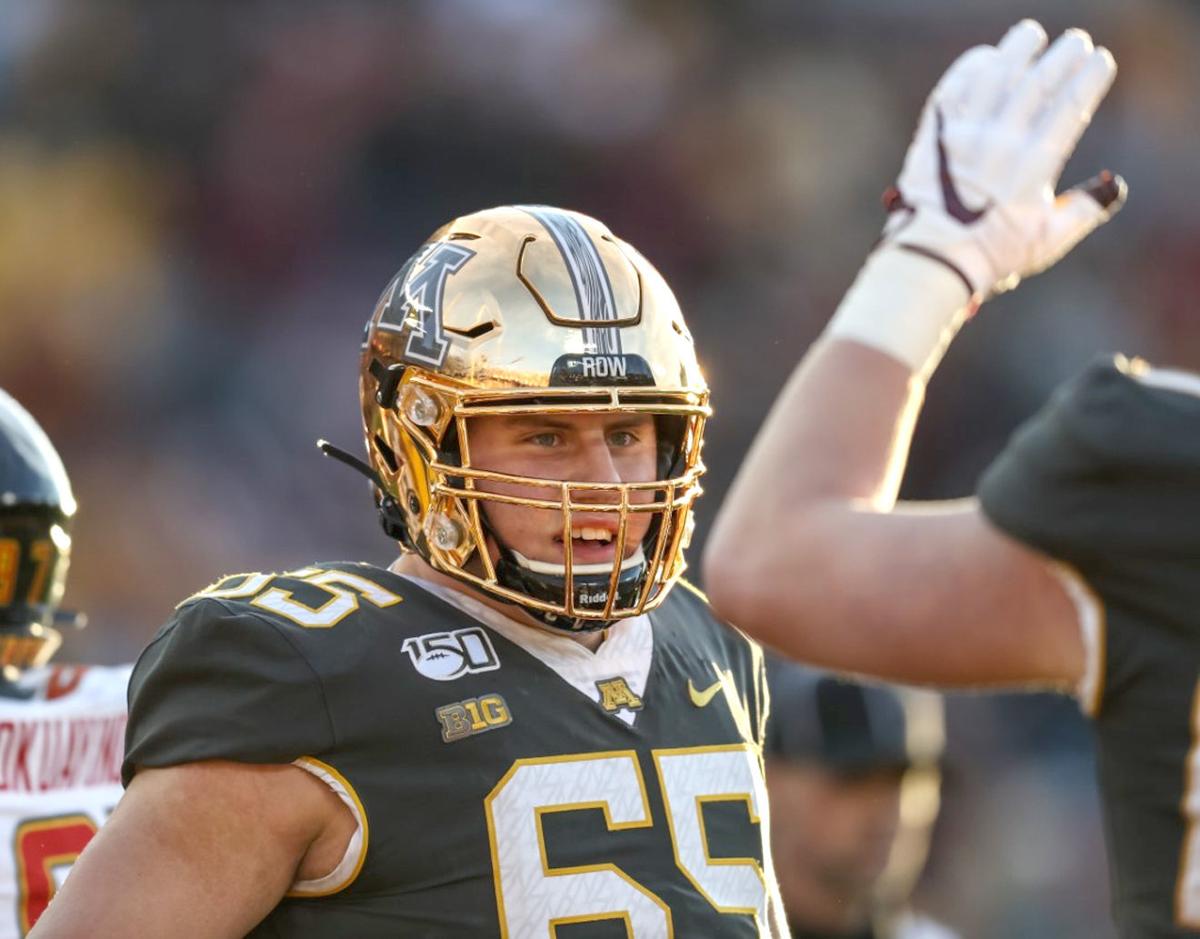 Axel Ruschmeyer, a redshirt sophomore for the University of Minnesota football team, makes an appearance in a home game against Maryland Oct. 26. The Holy Family Catholic graduate, a walk-on, played in five games including the Outback Bowl on Jan. 1. 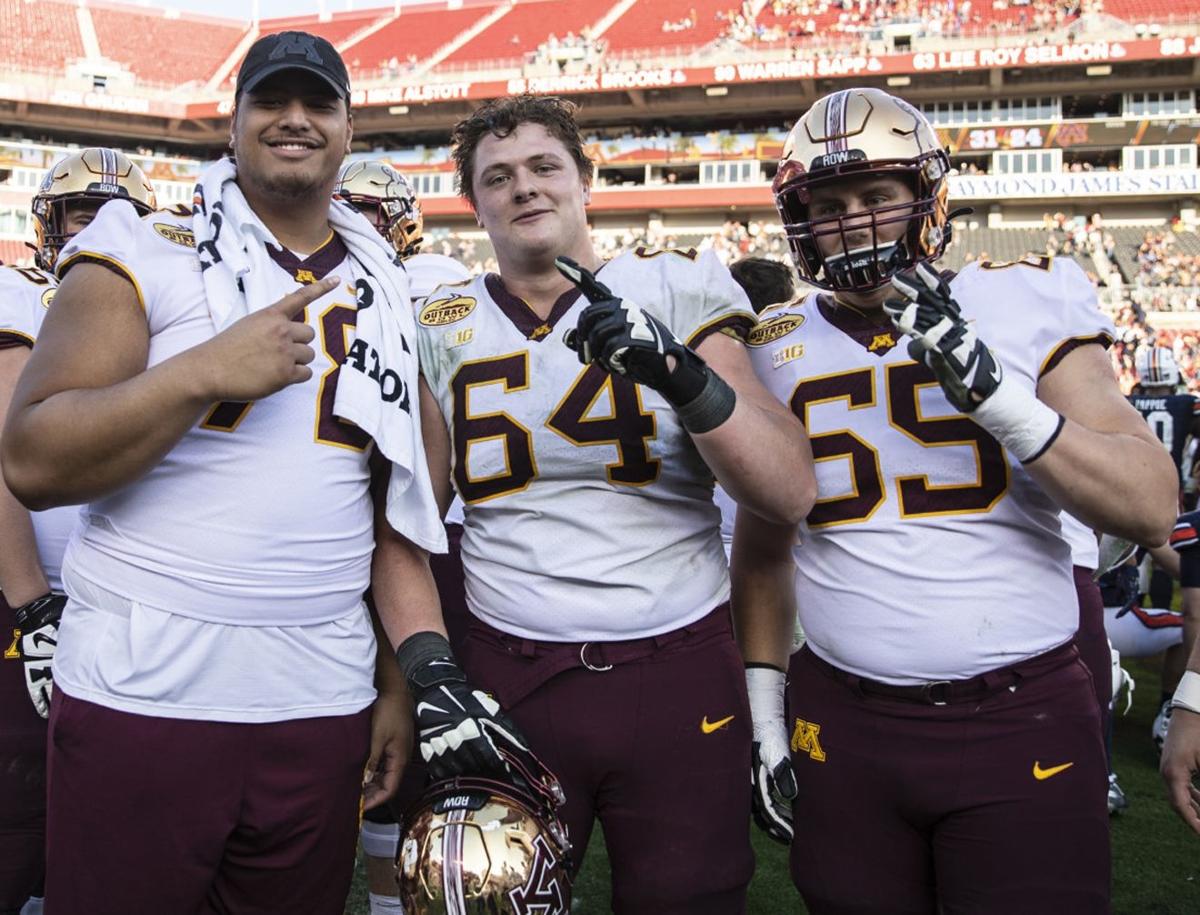 Axel Ruschmeyer, a redshirt sophomore for the University of Minnesota football team, makes an appearance in a home game against Maryland Oct. 26. The Holy Family Catholic graduate, a walk-on, played in five games including the Outback Bowl on Jan. 1.

The transition from prep football star to being just another guy in the University of Minnesota locker room was a different feeling for Axel Ruschmeyer. As a walk-on redshirt freshman in 2017, Ruschmeyer, who lives in Hutchinson and graduated from Holy Family Catholic, had to learn a new environment and a new way of doing things with the Gophers.

He worked hard that year and in 2018 on the scout team, but never saw the field. Finally, after two years behind the scenes, Ruschmeyer's work paid off. The offensive lineman made his collegiate debut against Illinois in the fifth game of the season and achieved his goal of playing Division I football for the Gophers.

"When I got to high school, the dream was to play college football," Ruschmeyer said. "There's no better place than here, Minnesota. ... Just getting a chance to play at TCF Bank in front of everybody was awesome. My whole family was there. I had friends and family that were watching the game. Just being able to actually play and get into the game and contribute to the team, it was amazing."

After his debut, Ruschmeyer patiently waited on the sideline each game for another moment to help the team. The next opportunity came when Danny Faalele, a fellow offensive lineman, was injured against Nebraska.

"We usually run a six o-line package on certain plays," he said. "Since Danny was down, I was the next man in and we didn't run it as much as we normally do, but I got a chance to go in and fill in for his role and shuffle the deck around."

Ruschmeyer continued to find his way onto the field in games against Rutgers and Maryland, but the biggest thrill of the season was traveling with the Gophers to Tampa, Florida, for the Outback Bowl on Jan. 1.

It was his first trip to the Sunshine State, and he was surprised during a visit to the beach to see so many Gophers fans.

Seeing "hundreds" of fans there to cheer them on was a great feeling for Ruschmeyer and his teammates, but it was nothing compared to what they experienced New Year’s Day at Raymond James Stadium.

"When we first came out of the tunnel and ran on the field, it felt like we were at TCF Bank," Ruschmeyer said. "The band's playing, the fans are screaming, it was nuts. My parents were saying that a lot of people were thinking about coming down, and I figured it would be some season ticket holders that want to see the game and go down to Florida for a little vacation. But I had no idea it would be the amount that it was. They almost filled up the whole lower bowl in the bowl game. That's insane."

The Gophers controlled every facet of the game and earned the program’s biggest win this century, and Ruschmeyer was part of it. He even recovered a fumble to help in the 31-24 win against Auburn.

After a 7-6 record last season, 2019 was quite a reversal for the Gophers with an 11-2 record and a win in a major bowl game. Many Gophers fans are quick to give head coach P.J. Fleck credit for the success, and Ruschmeyer agrees. Both joined the team in 2017, and in the past three years Ruschmeyer has seen the culture grow as the Gophers came together around Fleck’s vision.

So what about the future for Ruschmeyer? He’ll be a junior next year and plans to return to the team for the 2020 season. Whether it's a big package on the offensive line, on the goalline or in some other capacity, Ruschmeyer hopes he can help the Gophers with their goals next year, and possibly reach Indianapolis for a Big Ten Championship.

"I'm going to work my tail off this offseason," he said, "and give everything I've got so I can be a viable option if my name is called."