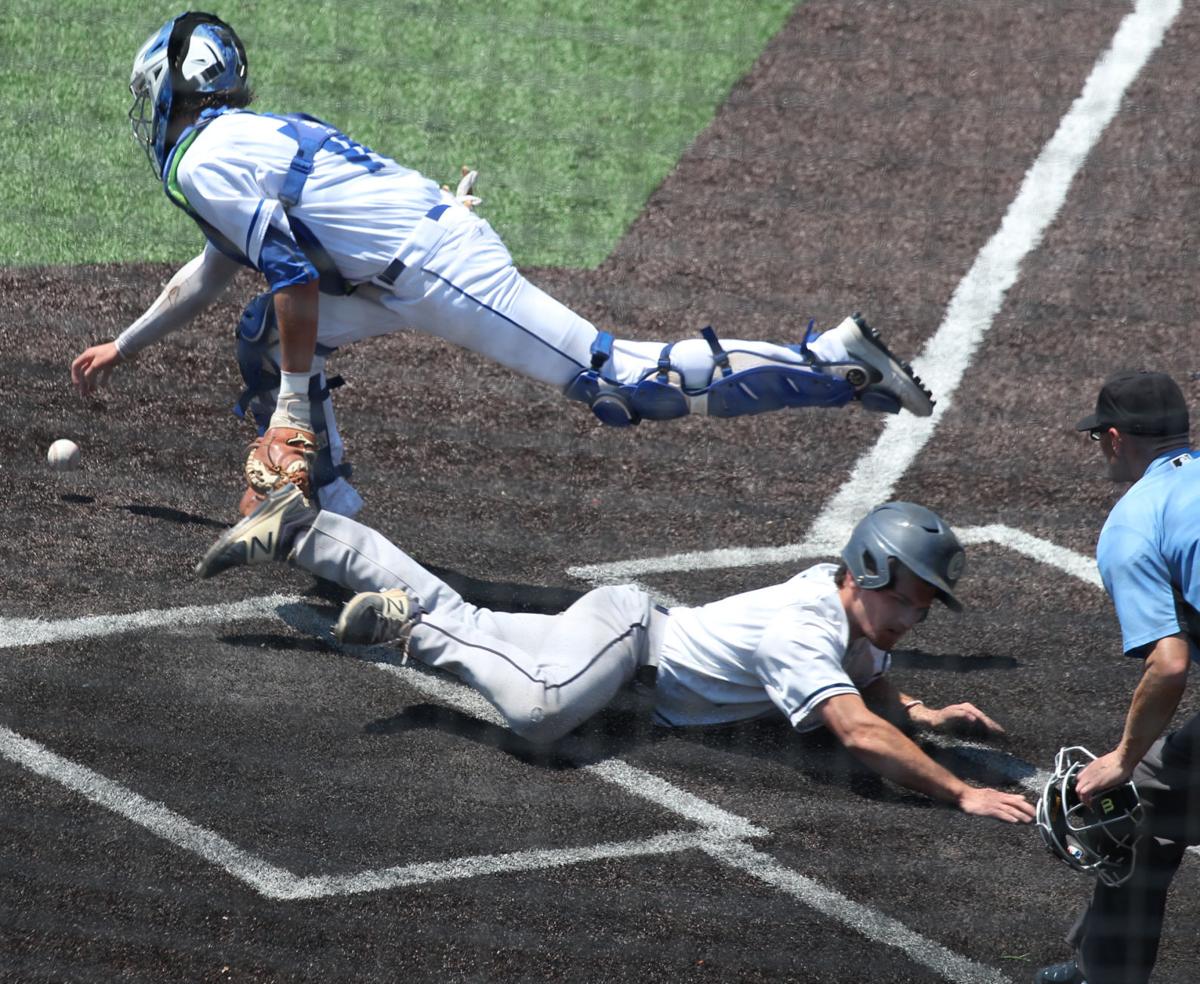 Minnetonka third baseman Josh Daniel makes a sprawling catch from first baseman, somehow applying a tag of Chanhassen runner Josh Och's foot for the second out of the first inning. 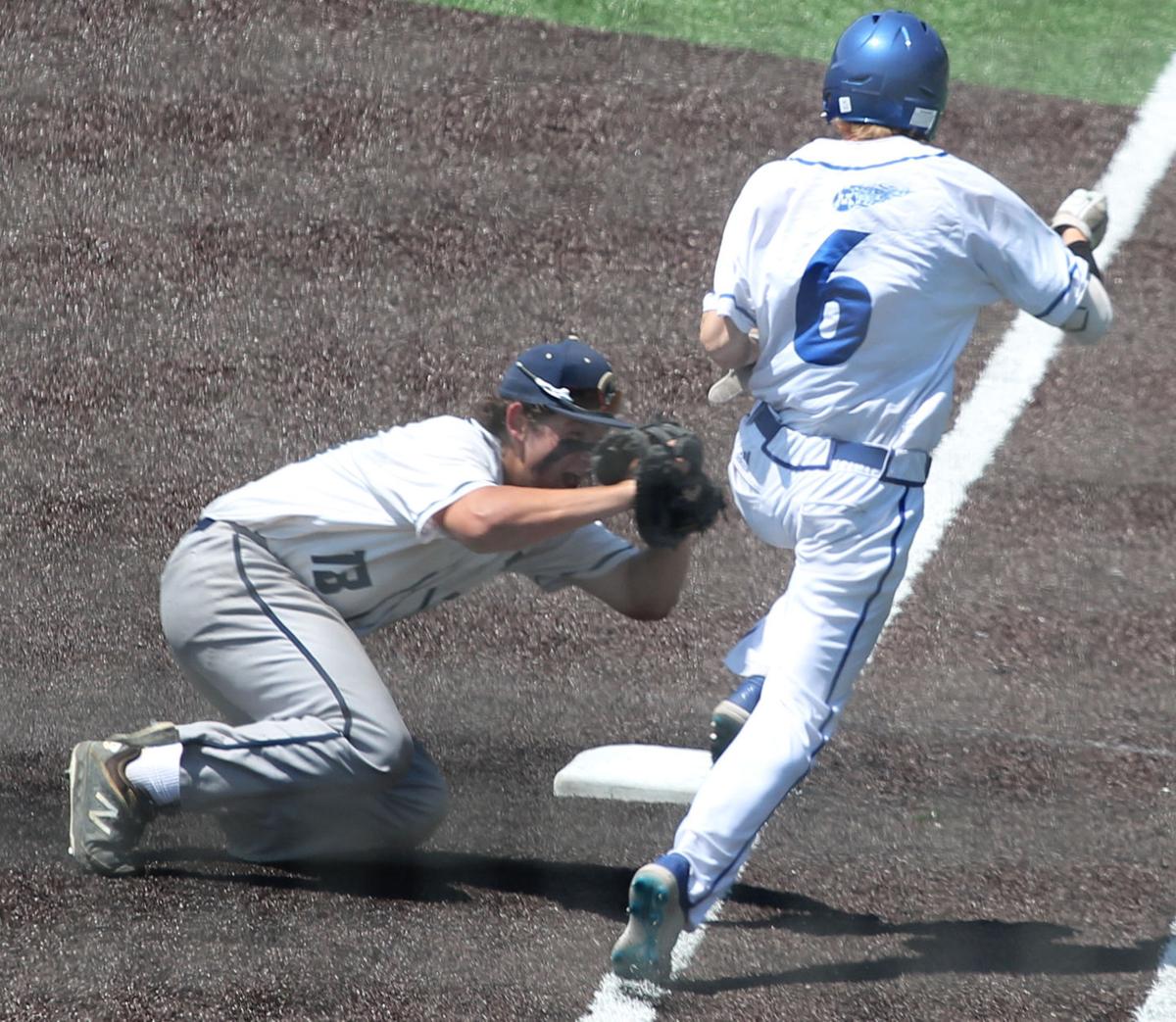 Minnetonka third baseman Josh Daniel makes a sprawling catch from first baseman, somehow applying a tag of Chanhassen runner Josh Och's foot for the second out of the first inning.

Chase Eiden never made it out of the second inning in the Section 2AAAA opener, five runs crossing home plate on two hits with four walks over 1 1/3 of an inning against Prior Lake on May 31.

Getting the ball for the fourth time this post-season, a third start, Eiden was long past the rough outing, controlling his curve ball masterfully in leading Chanhassen to a 2-1 win over Minnetonka in the first game of the championship series June 9 at Veterans Field.

"This is as good as we've felt all season. We're playing with such confidence, hitting the ball like we know we can," Chanhassen senior Hunter Sheehan said.

Chanhassen, after losing the first game of the playoffs, have reeled off five elimination wins to set up a winner-take-all championship game at 6 p.m. on Thursday, June 10, at Minnetonka High School.

"After my Prior Lake start, I've been worrying about first-pitch strike, get ahead of hitters. My curve ball was really on today, so first-time through, their top four hitters, I was throwing fastball first pitch, but then I changed to a lot of first-pitch curve balls," Eiden said.

Less than 16 hours after Jake Ryan shutout Prior Lake in a complete game, Eiden got the ball, bringing his "A" game. When things got rocky in the sixth inning, a walk on two close pitches to runners on first and second base, one out, a visit to the mound from coach Ross Van Hauen was simple and to the point.

"He told me to finish it out. He told me 'you got this.' He told me not to worry about the last pitch. To just go out there and do what I had been doing all game," Eiden said.

A fly out to right field was the second out before a chopper to first baseman Cole Van Holland ended the threat.

Eiden got the ball in the seventh inning, striking out the first two batters before inducing a pop out to shallow left field, finding the glove of shortstop Josh Och for the clincher.

"I knew my pitch count was good. I just needed to throw strikes and get guys out and our defense would hold it," Eiden said.

Minnetonka took a 1-0 lead in the second inning, benefiting from a misread line drive to right field that rolled to the fence for three bases for Charlie Hemer. A sacrifice fly from Josh Daniel tallied the Skippers' only run.

Chanhassen threatened in each of the first three innings, remarkable plays by Daniel at third base - an impressive tag on and off-target throw, and diving play on a ball down the line, where he raced to the bag, the glove hitting the base right before the Storm runner -- to negate any scoring opportunity.

Chanhassen did get on the board in the fifth inning with two runs. A lead-off double from Maddox Johnston, who has five hits in the post-season, all extra-base hits (four doubles, home run), started the rally.

Following a fly ball out from Mason Lang to advance runner Tucker Pinkerton to third base, a chopper to Daniel at third base brought the play home, a low throw that catcher Danny Davis was unable to hold onto with the tag.

"Our mojo right now is quality at-bats, getting these starting pitchers out in the third, fourth, fifth innings, getting into bullpens. Working counts, it all helps," Sheehan said.

The Storm had just five hits as well with Mitch Cummins going 2-for-4 with Och and Brenden Radtke each singling.

Walter Johnson and Zach Zaetta had Minnetonka's other two singles.

"I feel like we have a shot now. if we can keep playing like we've playing -- great defense, bats have been going, we'll be there tomorrow," Eiden said.