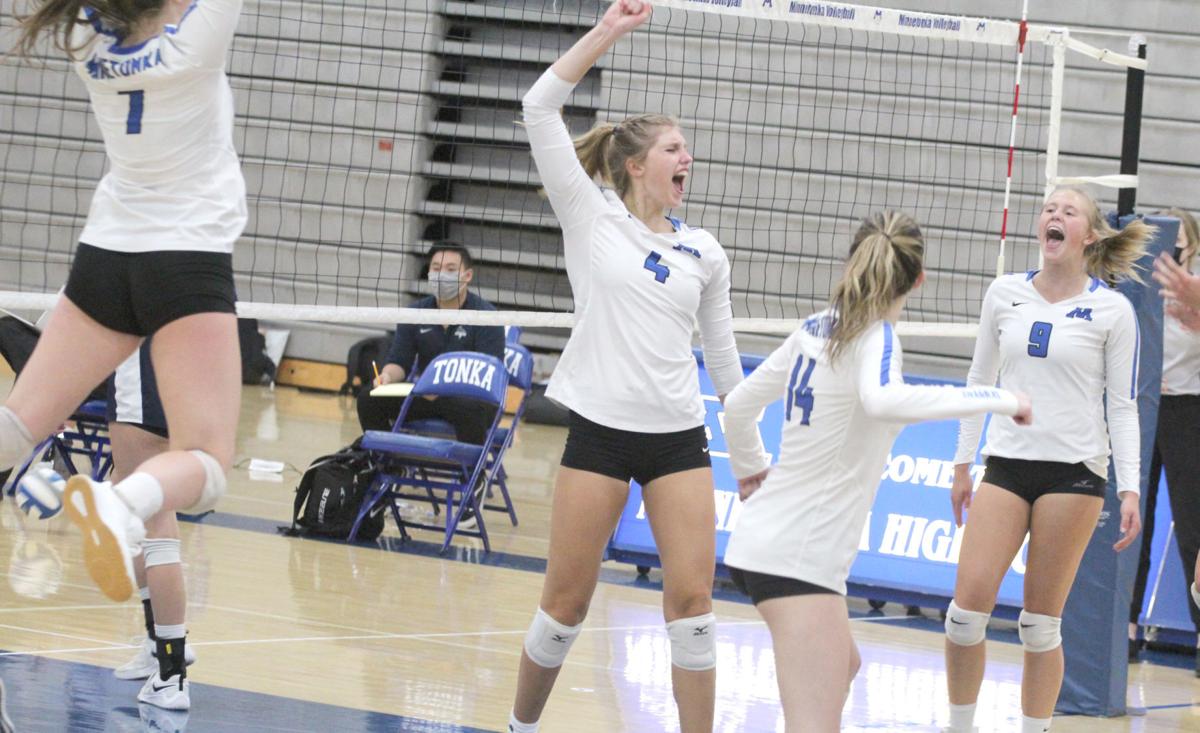 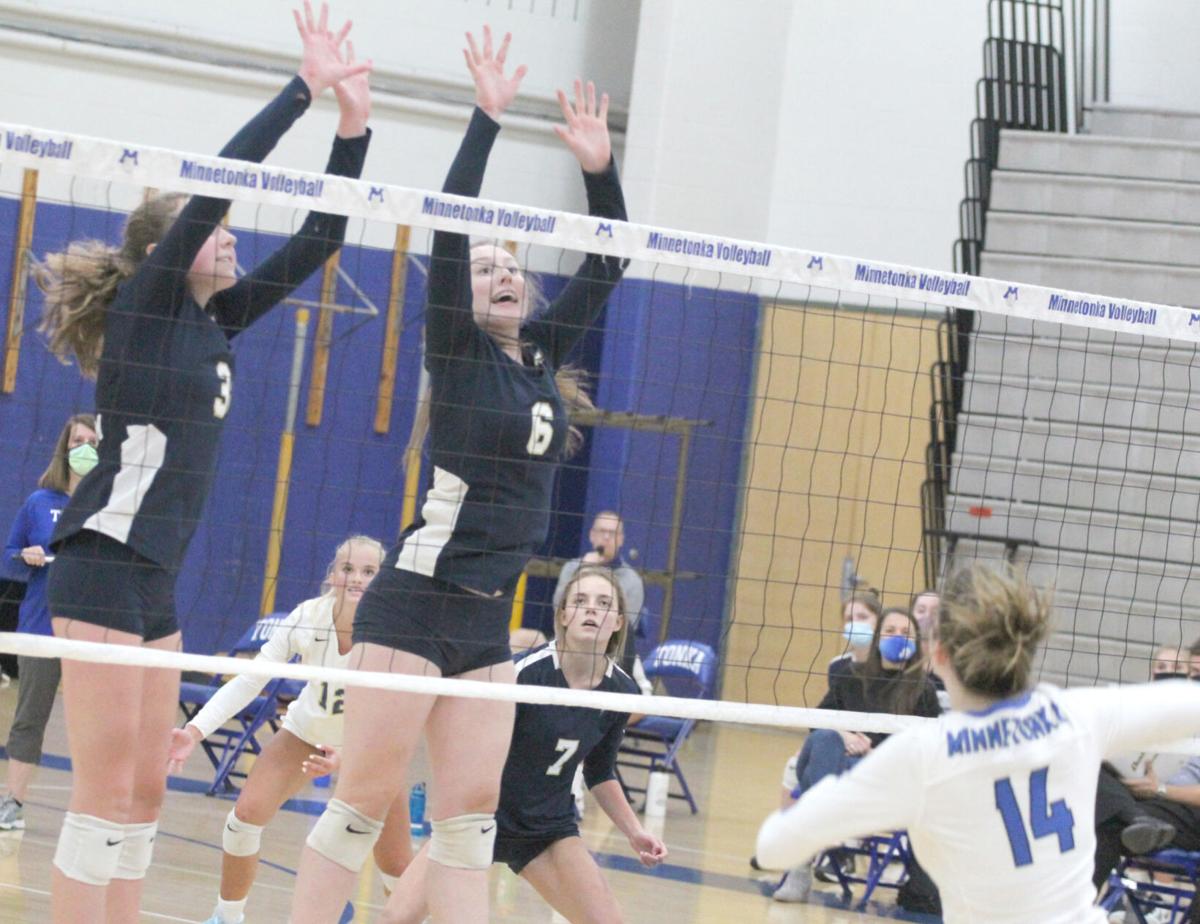 Ashlyn and Mackenzie Steding, playing together for the first time, team up for a block for Chanhassen in the season opener Oct. 8 at Minnetonka High School.

Ashlyn and Mackenzie Steding, playing together for the first time, team up for a block for Chanhassen in the season opener Oct. 8 at Minnetonka High School.

It's hard to fault father Mike Steding for rushing into his daughter's bedroom Oct. 8.

When you have daughters, senior Mackenzie and sophomore Ashlyn, of Chanhassen High School, set to play varsity volleyball together for the first time, and suddenly Twitter is blowing up with the news that spectators were going to be allowed, you find the first person you can find.

That was the scene Thursday morning inside the Steding household. When Mike and wife, Lindsay, woke up, there was a realization that watching their daughters play versus Minnetonka would only happen through live video.

The new guidance from the Minnesota Department of Education just hours into the day changed that. Two spectators per participant. Dad and mom had evening plans in person now.

"They were super pumped about it," Ashlyn said.

Playing in her varsity match, in a key position as setter, it was a bit more settling for Ashlyn knowing mom and dad were in the stands, supporting her as they have throughout her volleyball career.

"Having the parents here, having that extra cheer with your team, it makes you want to play your best, do what you can to win," Ashlyn said.

For Mackenzie, game No. 1 of a 14-match regular season felt at place.

"Getting out and playing, being in the gym, having this opportunity with my teammates, feels so good. I know if this was happening in the spring I would work just as hard, but it feels right playing now in the fall. Starting the season with Minnetonka, one of our biggest games, doing our best, it was a really great experience," she said.

Senior Kali Engeman, a third-year starter in the middle, also returns for the Skippers.

When a team has a season such as the one Minnetonka had in 2019 -- taking eventual state runner-up and top-ranked Eagan to an epic five-game state semifinal -- they want to get back on the court as soon as possible.

That was the case with the Skippers.

"I know everyone was excited to get back together and play with each other. Our training over the summer months you could feel it. You could feel the excitement again. I just have this feeling this team will be as good, if not better, than last year," Engeman said.

Sets to Engeman came as a change of pace with a fair amount of passes to the outside her sophomore year. Passes her way increased as a junior, as did her role in the offense, quick sets and slides scoring points often.

Now as a senior, when Engeman's in the front row, she commands the other team's attention.

"I am very ready for the challenge," Engeman said. "It feels good getting to be that type of player for my team. If I can pull a blocker away so my teammate has an open shot that makes me as happy as getting a big hit myself."

Engeman's attack on a well-placed pass from Koeppen slammed to the ground in game three. It even brought out an "uh-oh" from Minnetonka coach Karl Katzenberger. He said it's a pass the two have been working hard on, hence the excitement when it came to fruition.

"It was still definitely volleyball, but it wasn't normal. I think even more than ever we were grateful for the ability to play that we were going to take whatever season we could get. If it had been moved to the spring, I'm not sure I would have had this opportunity to play with my team, so getting to play in this gym again, it almost feels surreal," Engeman said.

With the morning announcement of spectators being allowed, school staffs quickly adjusted on the fly. Jon Summer at Chaska High School sent out a Google Doc link to families, requiring names, phone numbers and emails of all planned attendees. Visiting Bloomington Kennedy did the same.

At the ticket counter, rather than collecting admission, Chaska Evening Activities Coordinator Lauren Koloski highlighted names of spectators coming into the gymnasium.

Even teams were spread out in chairs and on the bleachers. Huddles at timeouts were the farthest from a huddle. The two officials, wearing masks, had handheld whistles that were activated with a push of the button.

Preparing for home tennis, soccer and volleyball events, as well as week one football with rival Eden Prairie, Minnetonka Activities Director Ted Schultz was catching up on work and emails after a frantic day during the volleyball match.

A temperature scanner was in place for all visitors into the building. Access in and out of the gymnasium were restricted with one-way signs.

"My mom was scheming ways to ref or do anything to get into the gym to watch. It's nice that they get to come and be in the gym and be parents," Engeman said.