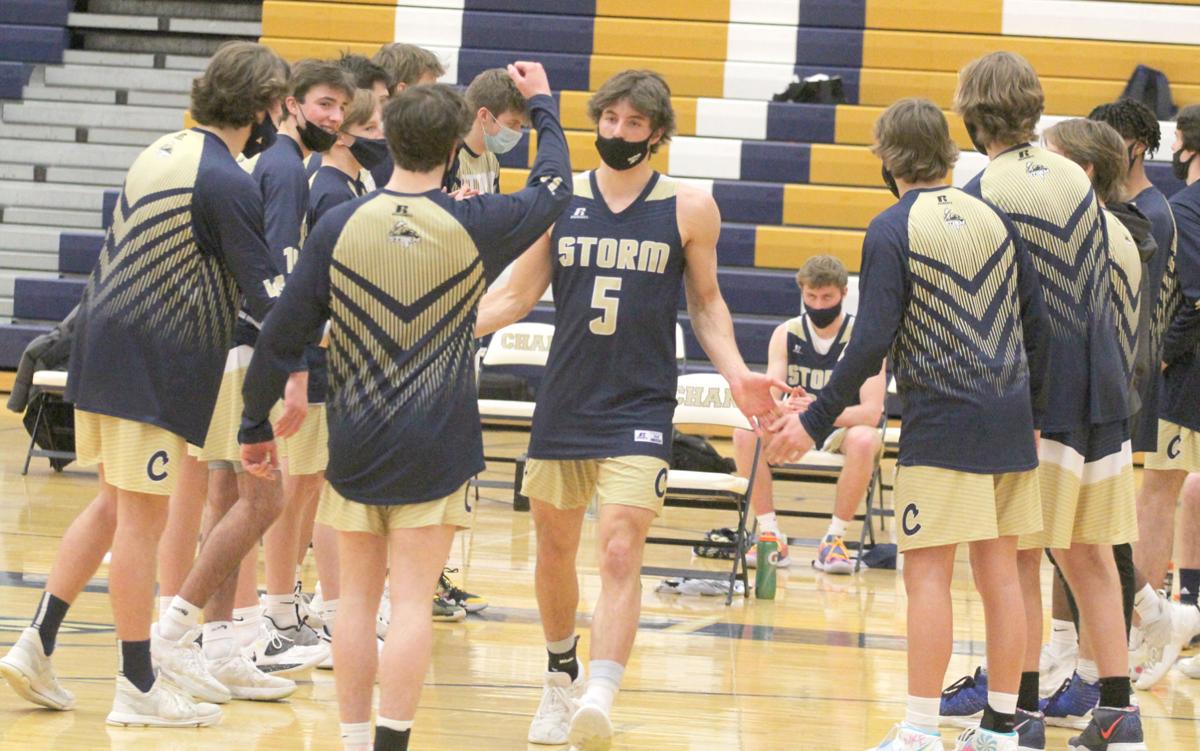 Chanhassen senior Ben Giles is announced during the starting line-ups introduction. Giles, after missing three-plus games with an ankle injury, has returned to lead the Storm in scoring in three consecutive contests. 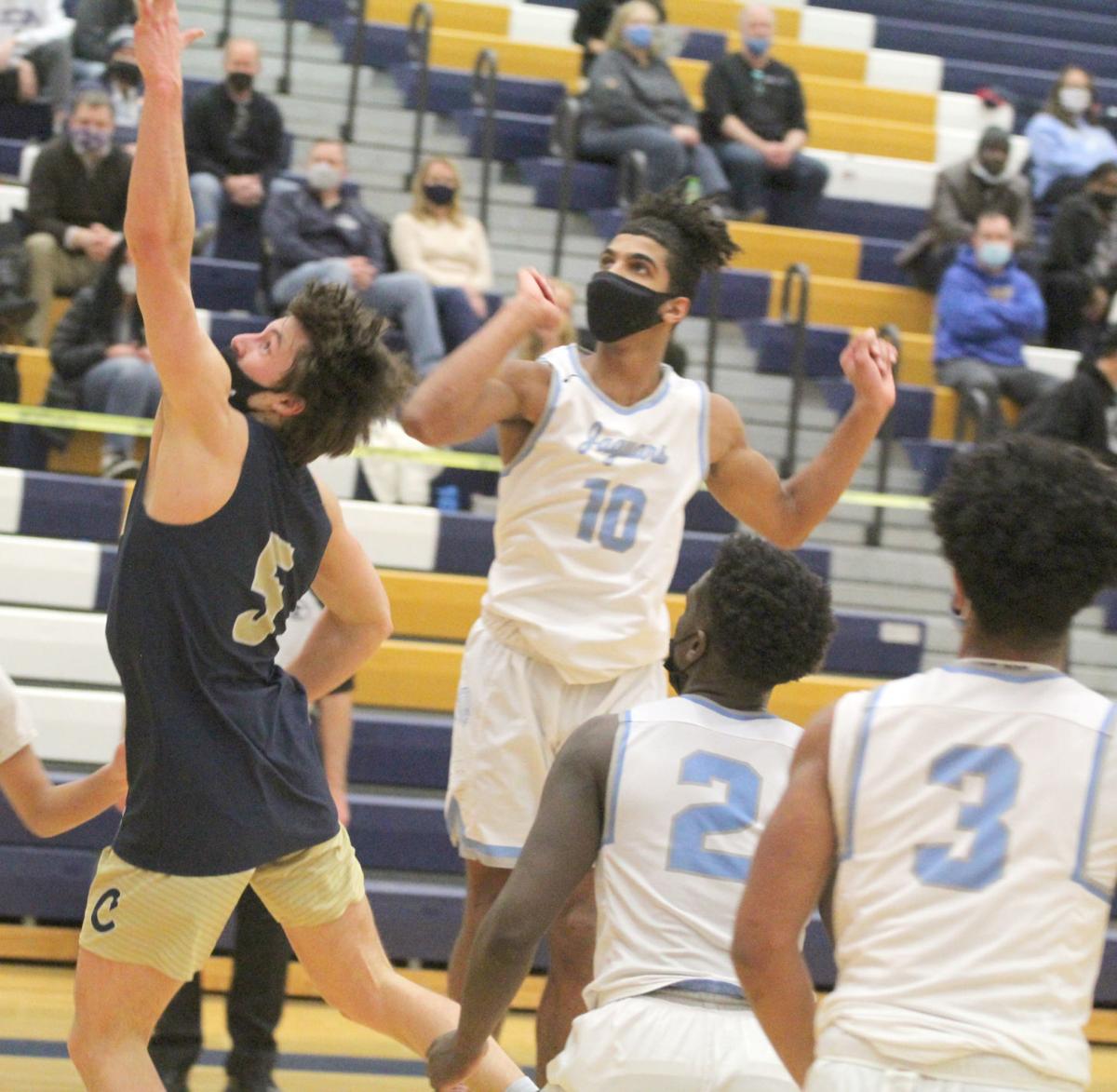 Senior Ben Giles with an off-balance left-handed shot for two points as Chanhassen doubles up Bloomington Jefferson at 42-21 in the second half. 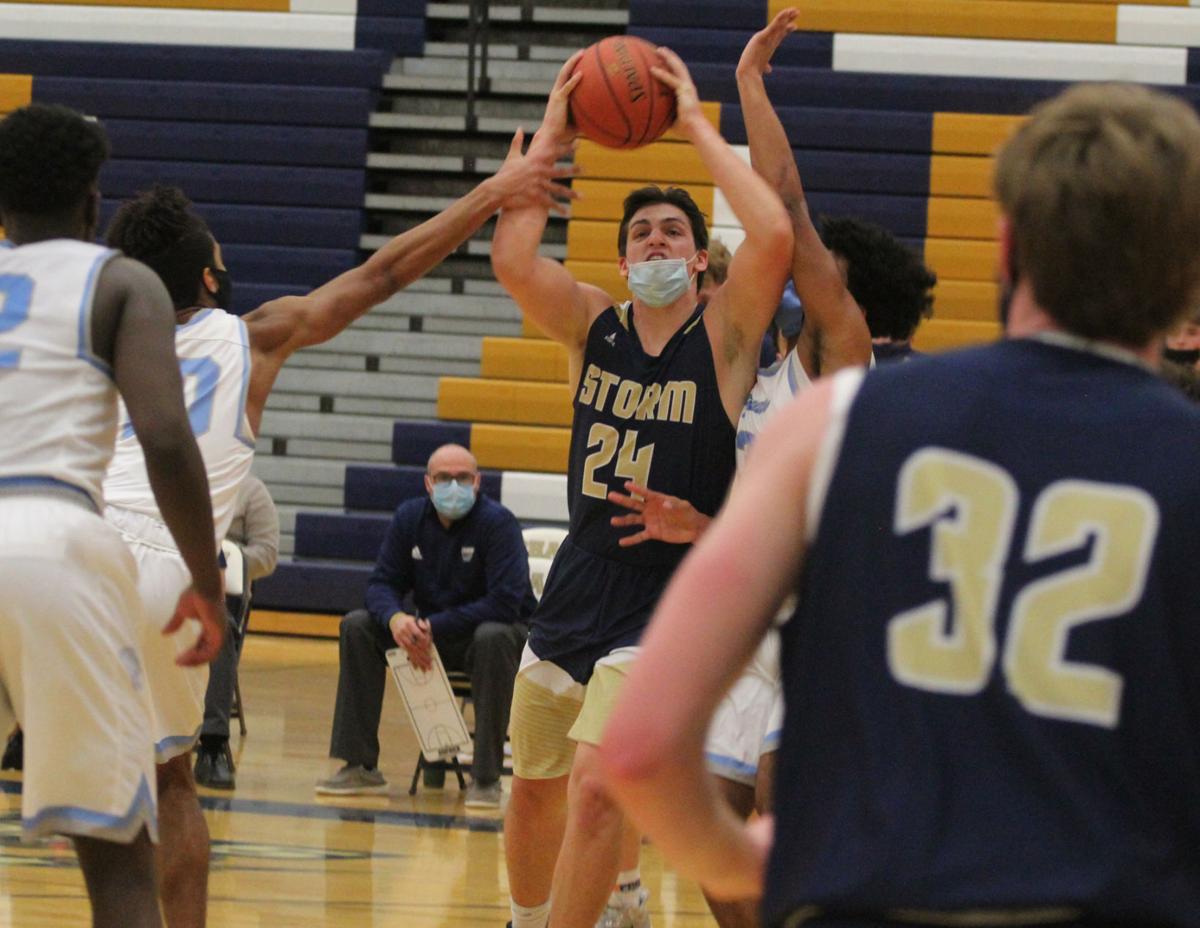 Chanhassen's Will Schleicher finds throw multiple arm fouls for an inside move and score, part of eight second-half points for the Storm junior. 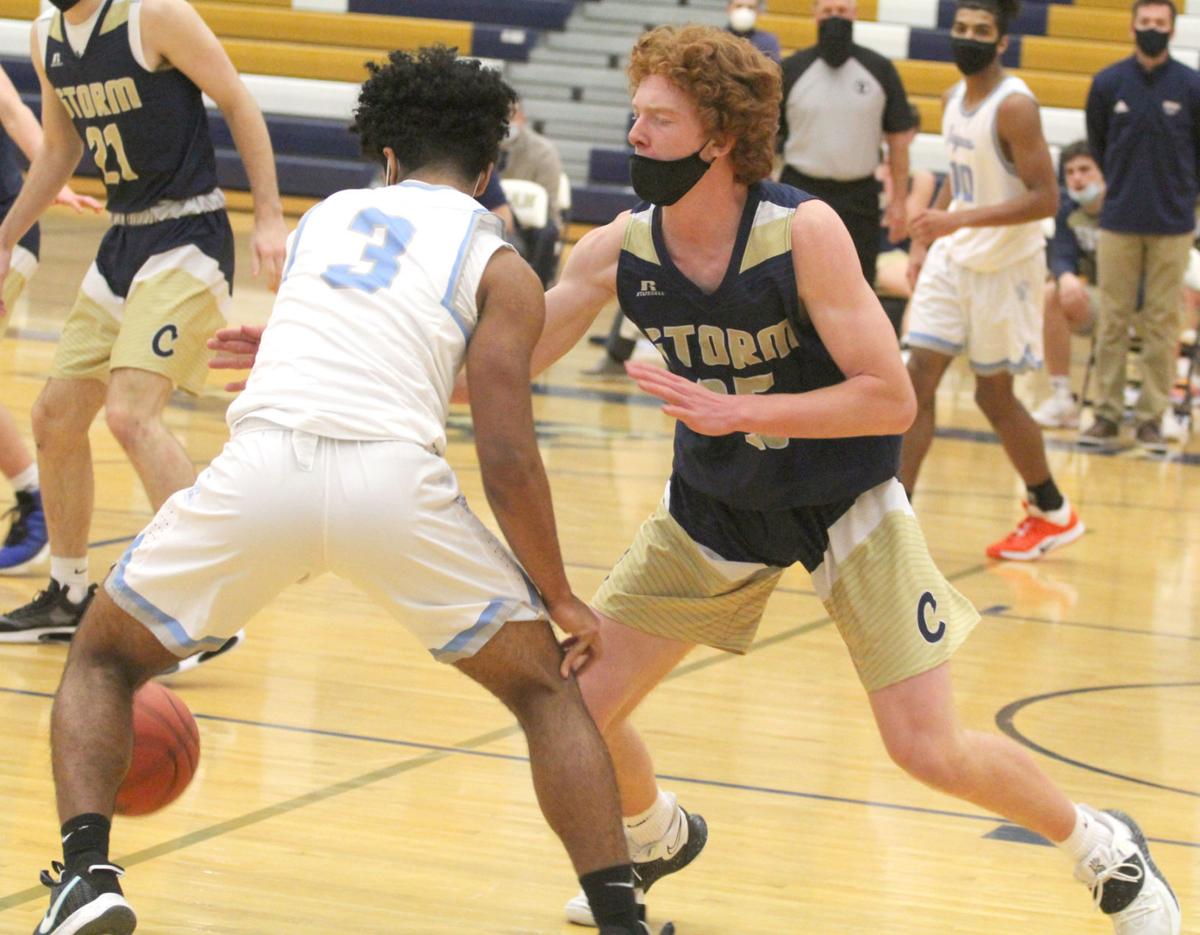 Chanhassen forward Eli Sweeney applies the pressure behind the arc during the first half against Bloomington Jefferson. The Jaguars scored 11 first-half points and were shooting 17 percent until late in the game.

Chanhassen senior Ben Giles is announced during the starting line-ups introduction. Giles, after missing three-plus games with an ankle injury, has returned to lead the Storm in scoring in three consecutive contests.

Senior Ben Giles with an off-balance left-handed shot for two points as Chanhassen doubles up Bloomington Jefferson at 42-21 in the second half.

Chanhassen's Will Schleicher finds throw multiple arm fouls for an inside move and score, part of eight second-half points for the Storm junior.

Chanhassen forward Eli Sweeney applies the pressure behind the arc during the first half against Bloomington Jefferson. The Jaguars scored 11 first-half points and were shooting 17 percent until late in the game.

A 9-0 lead on a Grant Muffenbier 3-pointer, two Austin Boll jumpers and a steal and foul, two made free throws from Muffenbier.

Yet because of their defense -- and a Bloomington offense that was colder than the windchill temperatures outside (courtesy of TCHoopsCzar on Twitter) -- the Storm forced turnovers on the Jaguars' first four possessions, even the scoreless stretch did nothing to Chanhassen's overall command of the game.

The Storm outscored Jefferson 16-3 over the last seven minutes of the first half, doubling them up at one point 42-21 in the second half in a 55-37 win.

Bloomington Jefferson, before making 6-of-7 field goals down the stretch, was 8-for-46. That's right, 17.3 percent.

"Our energy comes from our defense so when our defense is going, we're making plays. We feel the energy from the bench and our offense just comes with all of that. It's something we talk about at practice, how one thing leads to another," Chanhassen senior Ben Giles said.

Seven games into the 2021 season, Chanhassen is right there, yet Tuesday's win was just their second. They lost in single possession games with Jefferson and Chaska and had chances to beat Robbinsdale Cooper and Bloomington Kennedy.

Despite allowing more than 50 points just once, the Storm started 0-4.

"It does take time. We were getting it done in the beginning of the season on the defensive end, and then we had a game where we brought it only on the offensive end. Tonight was a good example of what the outcome can look like when we put it all together on both ends," Giles said.

Chanhassen was also missing Giles, who hurt an ankle in the season opener at Jefferson. After painfully sitting through the tough losses, wanting badly to be out there, Giles returned to the court in scoring 22 points in an 87-80 overtime win over St. Louis Park.

Giles has been the leading scorer in all three games since his return.

"I wanted to be out there. Being my senior year, that it is a limited season, I didn't want to miss any time, so it was tough. But I'm feeling better now," said Giles.

Putting together a full 36 minutes has been the challenge from first-year Storm coach Corey Christopherson. Most games the defense has been there; other times not.

"The biggest thing for us seniors is setting a tone, setting the energy level for the rest of the team. I don't want to say in the past it's been lackadaisical, but we're certainly trying to create more havoc on defense. We're starting on the defensive end and going from there," Giles said.

Chanhassen, up 25-11 at halftime against Bloomington Jefferson, put the foot down on both ends of the court in the opening minutes of the second half.

It was Boll and Giles early, scoring nine of the first 15 Storm points. Then it was Will Schleicher, who literally took over the game, scoring eight consecutive points for Chanhassen.

Braden Barger also added 10 points for the Storm, including a pair of first-half 3-pointers that helped Chanhassen push out a once 9-8 lead to 18-10.

Chanhassen hosts Robbinsdale Cooper at 7 p.m. on Friday, Feb. 12. The Hawks are co-leaders in the Metro West Conference after defeating Chaska on Tuesday.

The two leaders in the Metro West Conference, a victory from Chaska moving the Hawks two games ahead of Robbinsdale Cooper, instead there's a dead heat now.

Cooper prevailed 56-54, moving into a tie with Chaska at 6-1 in league play on Feb. 9. The Hawks won the season opener between the two teams 67-49, the only loss in nine games for Cooper.

It was the second loss in three games for fifth-ranked Chaska after starting the season with a 5-0 record.

Luke Strazzanti (19), Brady Nicholson (13) and Spencer Goetz (10) were in double figures for the Hawks.

Chaska is at Bloomington Kennedy at 7 p.m. on Thursday, Feb. 11.

Sophomore Boden Kapke netted a career high 26 points as Holy Family Catholic came up just short in a second-half rally, a 55-50 loss to Waconia on Feb. 9.

The deficit grew to 12 points multiple times including 42-30 before back-to-back inside makes from Kapke and a 3-pointer from Noah Seck pulled the Fire within five. Holy Family Catholic got the lead down to four points.

Seck finished with an even 10 points for the Fire with Spencer Swanson and Wally Wisniewski in double figures with 19 and 14 points for Waconia.