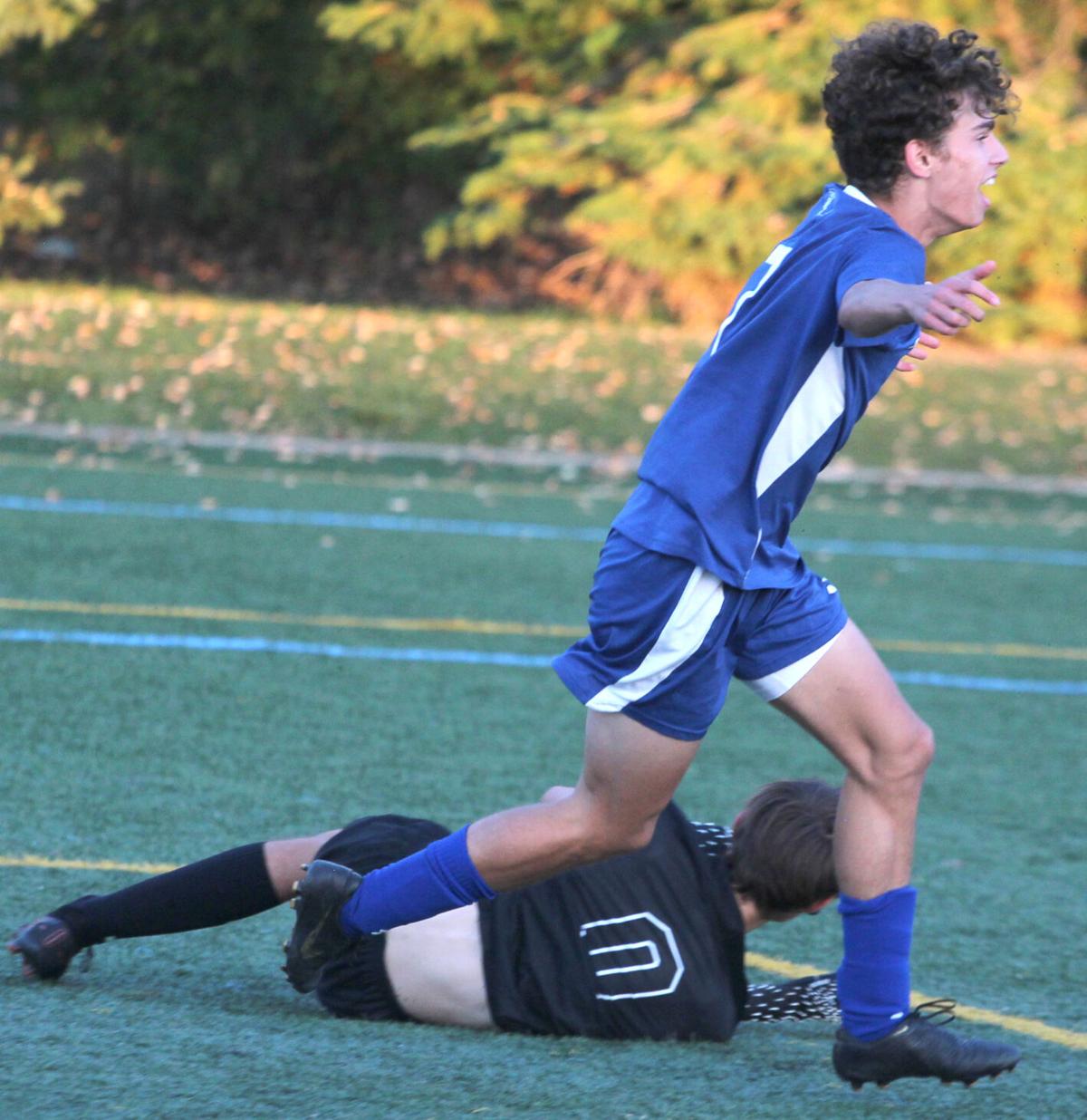 Minnetonka's Alex Gonikman celebrates his second goal of the game, a 3-0 win over Edina on Oct. 5. Gonikman pressured the Hornet defense, forcing a turnover for the tap-in goal late in the contest. 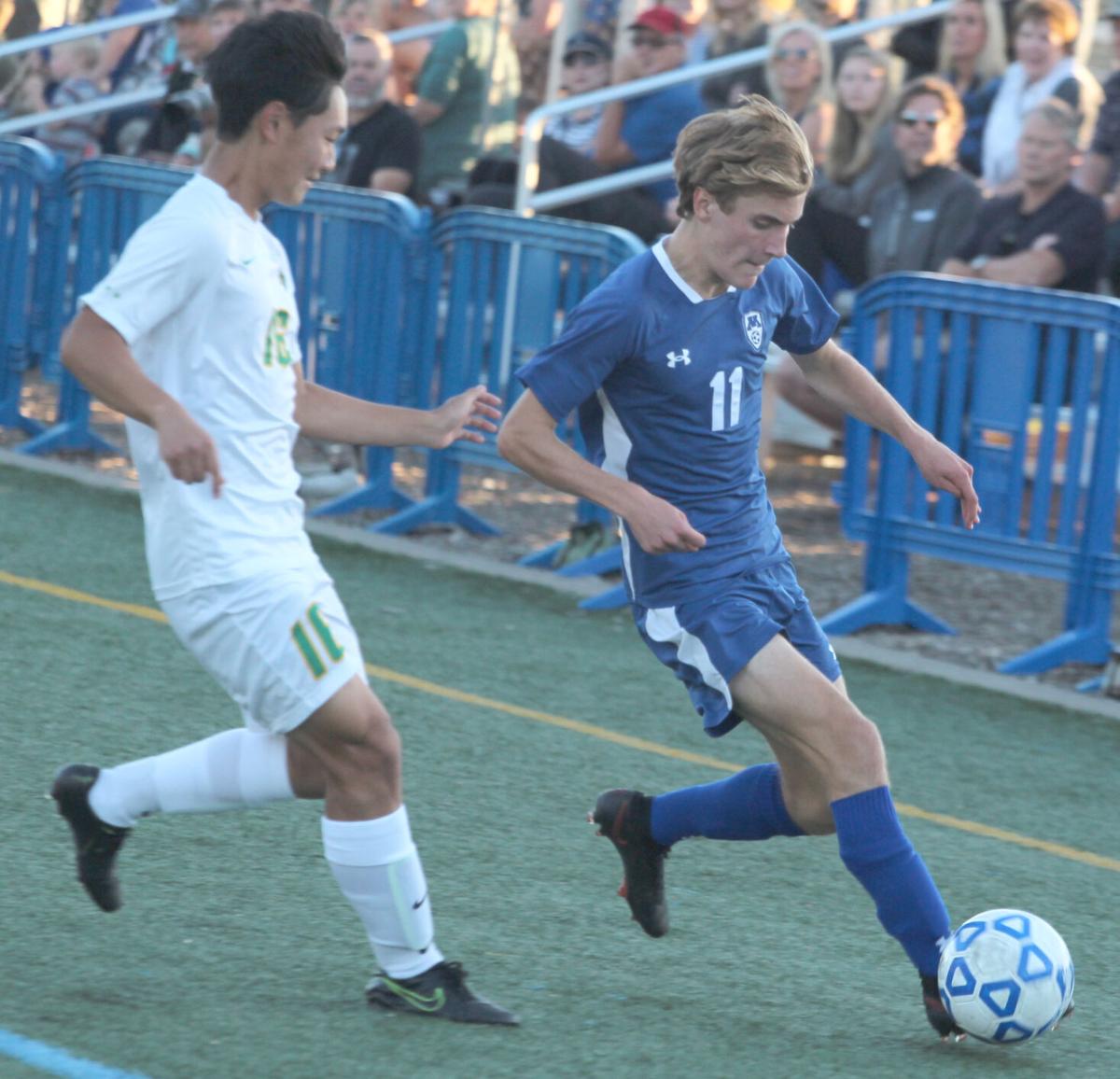 Minnetonka's Torin Firehammer carries possession down the sideline in the second half, helping the Skippers secure a 3-0 win over Edina on Oct. 5.

Minnetonka's Alex Gonikman celebrates his second goal of the game, a 3-0 win over Edina on Oct. 5. Gonikman pressured the Hornet defense, forcing a turnover for the tap-in goal late in the contest.

Minnetonka's Torin Firehammer carries possession down the sideline in the second half, helping the Skippers secure a 3-0 win over Edina on Oct. 5.

Minnetonka suffered a pair of losses in a three-game stretch between Sept. 14 and 21, 1-0 to Edina and 3-1 to Minneapolis Southwest. Ever since the seventh-ranked Skippers boys soccer team is 5-0, having out scored opponents 23-2.

Behind a pair of first-half goals from Alex Gonikman and Torin Firehammer, Minnetonka avenged the earlier loss to Edina, winning 3-0 at home on Oct. 5.

The Skippers, at 6-1-1 in Lake Conference play, lead Wayzata by a half-game.

Minnetonka is at St. Michael-Albertville on Thursday, Oct. 7, before a potential winner-take-all matinee at 1 p.m. on Saturday, Oct. 9, with Wayzata.

Peyton Olson made six saves in the shutout with Jack Olson and Ketav Udupa each recording assists. Gonikman added his second goal of the game, finishing a Hornet misplay in the box, for the 3-0 advantage.

Pressing for the go-ahead goal in overtime, Holy Family Catholic broke through as Ryder Ferguson found Thomas Laaksonen for the eventual winner in a 5-3 road win over Watertown-Mayer on Oct. 5.

Laaksonen scored a hat trick, all three goals on assists from Ferguson.

Joey Maher added a penalty kick goal in the closing two minutes for the 5-3 final.

Eric Oconitrillo got the fifth-ranked Class A Fire on the board with a first-half penalty kick goal as well.

Holy Family Catholic (7-4-2), which finished third in the Wright County Conference behind champion Southwest Christian and Mound-Westonka, concludes the regular season with Benilde-St. Margaret at home at 7 p.m. on Saturday, Oct. 9.

A pair of ranked teams went deep into regulation knotted at two before Holy Angels' Aidan Smith buried the winner in the 78th minute as the Stars prevailed 3-2 over Southwest Christian on Oct. 5.

Holy Angels is a defending state champion from 2019.

Southwest Christian, ranked No. 4 in Class A, took an early 1-0 lead on a goal from Jon Brain, his third consecutive contest with a score since his return.

Following a pair of Carter Hermanson tallies for Holy Angels, Camden Mellema's second goal of the season, in the 60th minute, drew Southwest Christian even.

Goaltender Adam Tebbs made a penalty kick save in the first half for the host Stars.

Southwest Christian (9-3-3) is at Minnehaha Academy in the regular season finale at 5 p.m. on Thursday, Oct. 7.

Diego Fuentes Rodriguez scored twice in the second half as Bloomington Kennedy defeated Chaska 2-0 on Oct. 5 at Bloomington Stadium.

Jaime Reyes added an assist for the Eagles, which are 4-4 in the Metro West Conference.

Benilde-St. Margaret improved to 6-1-1 in Metro West Conference play, a 4-0 road win at Chanhassen on Oct. 5.

No statistics were available for the match.

The Red Knights are ranked No. 7 in Class AA.