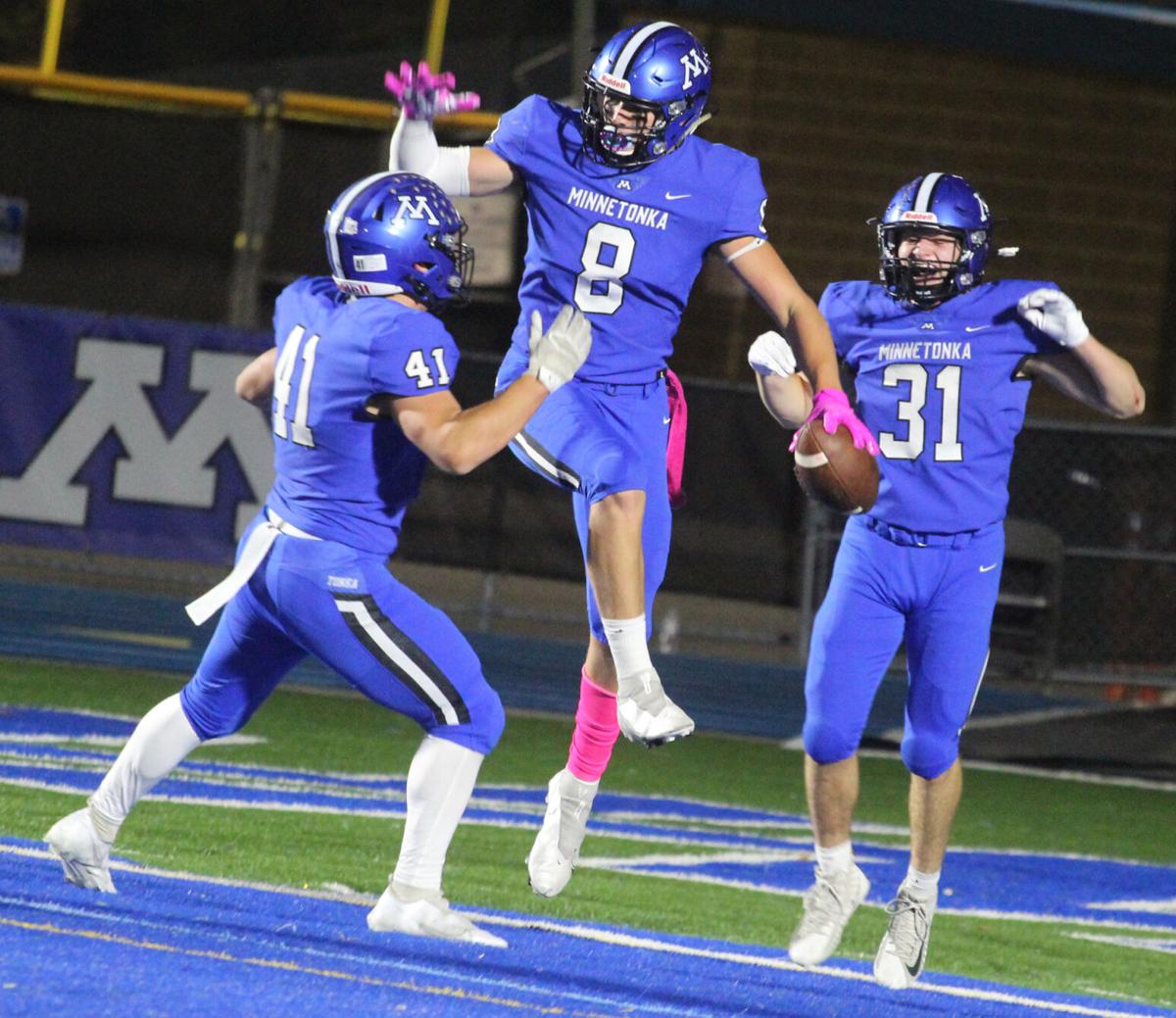 Andrew and Jacob McCalla (41 and 31) celebrate with receiver Casey Miller following a 42-yard catch-and-run in the second quarter, giving Minnetonka the 17-0 lead over Brainerd on Oct. 29. 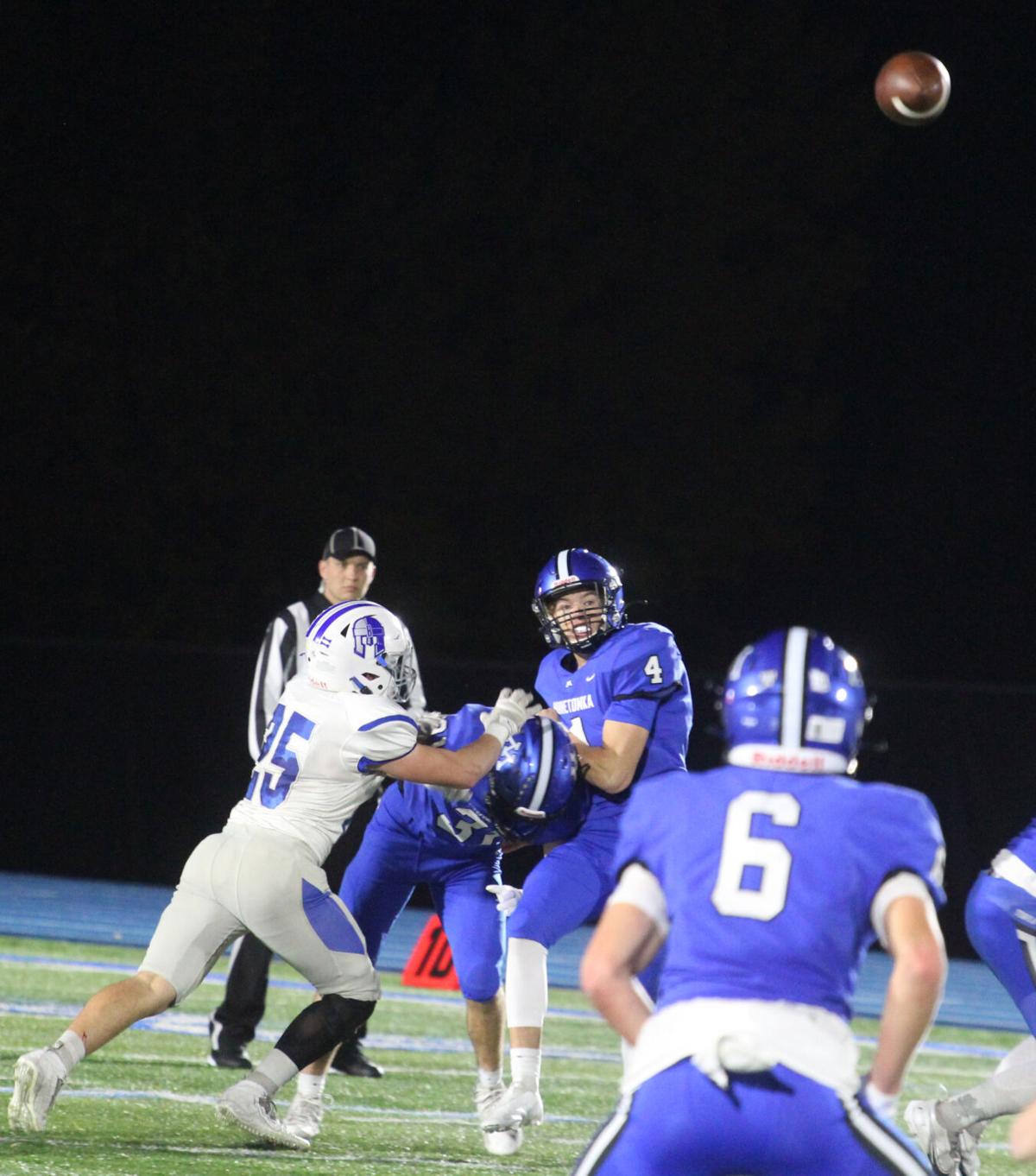 Quarterback Will Martin fires a pass downfield to receiver Tyler Lien (6) for a first down. The Minnetonka senior captain eclipsed 2,000 career passing yards on Friday.

With temperatures hovering in the mid-40s, by the second half, players' breathes were certainly visible in the night sky. 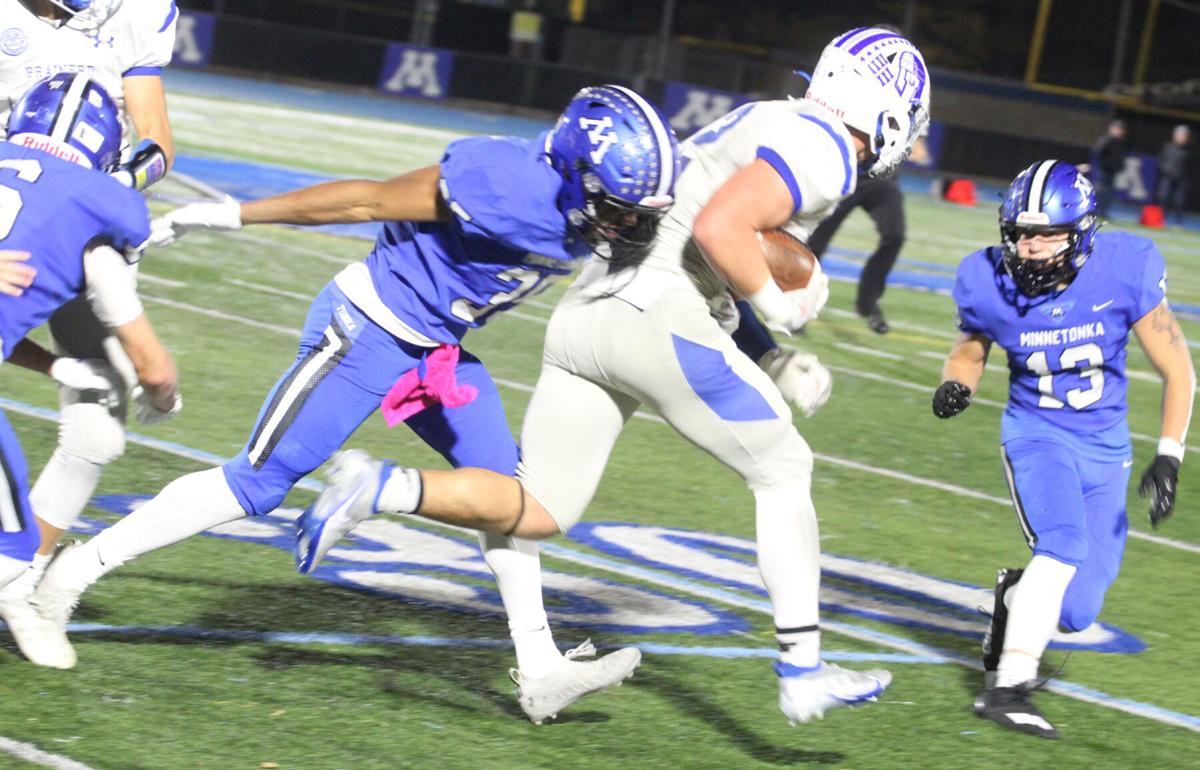 Prentice Wheatley (35) and Ashton Hoffman (13) finally bring down Brainerd star back Nathaniel Staehling after a first-down run. While Staehling was able to pick up chunks of yards at times, he was held out of the end zone by the Minnetonka defense.

Andrew and Jacob McCalla (41 and 31) celebrate with receiver Casey Miller following a 42-yard catch-and-run in the second quarter, giving Minnetonka the 17-0 lead over Brainerd on Oct. 29.

Quarterback Will Martin fires a pass downfield to receiver Tyler Lien (6) for a first down. The Minnetonka senior captain eclipsed 2,000 career passing yards on Friday.

With temperatures hovering in the mid-40s, by the second half, players' breathes were certainly visible in the night sky.

Prentice Wheatley (35) and Ashton Hoffman (13) finally bring down Brainerd star back Nathaniel Staehling after a first-down run. While Staehling was able to pick up chunks of yards at times, he was held out of the end zone by the Minnetonka defense.

Will Martin was on the Minnetonka 10B football team when varsity quarterback Luke Tollefson was lost for the season in 2019. By mid-season, he was on the 10A team, replacing Joey Gendreau, who got a shot over the final five varsity games as a sophomore.

Martin hit the weight room after the season. He did everything to prepare himself to get a shot at the quarterback role as a junior. And he won the job.

Someone in the Minnetonka huddle wanted a touchdown pre-drive.

Despite a holding penalty and sack, the Skippers get just that, a 12-yard run from Jacob McCalla

Martin entered the playoffs having completed 89-of-122 attempts -- a remarkable 73 percent good -- for 1,114 yards and 15 touchdowns with just two interceptions.

His growth having come so far, Martin was named one of five Skipper captains this season.

"It was a lot about working hard, growing into my body, growing into the role. I knew there might be an opportunity my junior year. We had a quarterback competition, Joey and I, and the coaches felt they could use him in so many ways, so I won the job," Martin said.

Seth Beil, another captain, as early as second grade, remembers looking over at Einer Anderson Stadium, knowing someday that would be him.

He followed his brothers, Colin, now an assistant coach with the sophomore team, and Jack, who started at safety in Minnetonka's Prep Bowl runner-up team in 2017.

"With COVID last year, it was super tough especially to develop that bond. That is something we have worked so hard on this year. We've gotten so close with the younger players. It really feels like the program is a family now. It's just a different culture. I could go up to any of these guys and they'd feel like a brother to me," Beil said.

Take away a 35-7 loss to Maple Grove in week three, a game Minnetonka was shell-shocked in allowing five first-half touchdowns, the Skippers have passed every other test.

They held five of their first seven opponents to single digits in points, and in impressive style beat a Centennial team with wins over Maple Grove and Wayzata in a 31-7 rout.

After missing games against Maple Grove and Champlin Park, Martin returned to throw multiple touchdowns in the final four regular season games. His 337 yards on 21-of-24 passing in week eight at Roseville Area was a career night.

"Our motto all year has been 'prove them wrong.' It started in the weight room during the off-season and it built into this. Hard work really is paying off for so many," Martin said.

Martin will be the first one to tell you, he thinks he has the best group of receivers in the state. There's speedster Cade Conzemius (38 catches, 344 yards, four touchdowns). There's big-play Tyler Lien (26 catches, 326 yards, three touchdowns). And there's Gendreau, a little-bit-of-everything player for the Skippers (31 catches, 385 yards, seven touchdowns).

Add in emerging receiver Casey Miller, who hauled in his third score of the season, now finding the end zone in three consecutive games, and Martin's weapons are solid.

Jacob McCalla, who sprung a big run to get into Brainerd territory, caps scoring drive with 2-yard score

Both Gendreau and Lien got shots at quarterback as sophomores. Now receiving targets, Martin feels the way things played out ended up being best for the team.

"We're able to do so many things, so many little tricks plays. Even tonight Joey was able to throw a ball downfield. We had an open guy there. So it's fun to have those guys understand the quarterback role," Martin said.

Beil played safety his first two high school seasons, so when he showed up for camp before his junior year, naturally that's where he expected to be placed.

Need the defense to seal a win, look no farther than Minnetonka, which did not allow a second-half point in six of eight regular season games.

Even in the playoff opener, Brainerd did not get on the board except for the final minute of each half; the second score long after the game had been decided.

"Sophomore year, a lot of these guys were on our 10A team. I think we allowed teams to score like three points a game. Last year, we were all juniors, and it kind of stopped. We were too afraid to mess up. This year, we've all grown up, and we understand what we need to do out here. That super aggressive mindset where between the whistles you hit, and you hit hard," Beil said.

Mark Esch, in his second year as head coach at Minnetonka, knows what it takes to win this time of year. He did it many seasons at Mankato West.

After the game, calling the Skippers into the huddle, he talked about getting every team's best in the playoffs. He talked about dedication to the family, introducing one of his former West players, Charles Terry. He talked about never looking ahead, only focusing on one team, one game.

That team is Farmington. A second-round contest all set for Friday, Nov. 5.

It's a Farmington squad that was tested, scoring 29 points in a touchdown loss to Eden Prairie, and then followed with Shakopee and Lakeville South.

"I remember making tunnels out here for the players to run through. It feels like it's gone so fast. Tonight was the last time playing on this field. It's crazy," Beil said.

Jacob McCalla scored three times, including a first-quarter touchdown, as Minnetonka jumped out to a 17-0 lead en route to a 30-15 win over Brainerd on Oct. 29.

Quarterback Will Martin's razzle-dazzle play on 4th-and-1, taking a hand-off from Joey Gendreau, who set-up in a Wildcat formation, taking the direct snap, resulted in a 42-yard catch-and-run from Casey Miller.

McCalla closed the door on the visiting Warriors with rushing touchdowns of 14 and 19 yards in the third and fourth quarters.

Evan Swenson picked off his seventh interception of the season, while Keagan Zabilla connected on a 27-yard field goal.