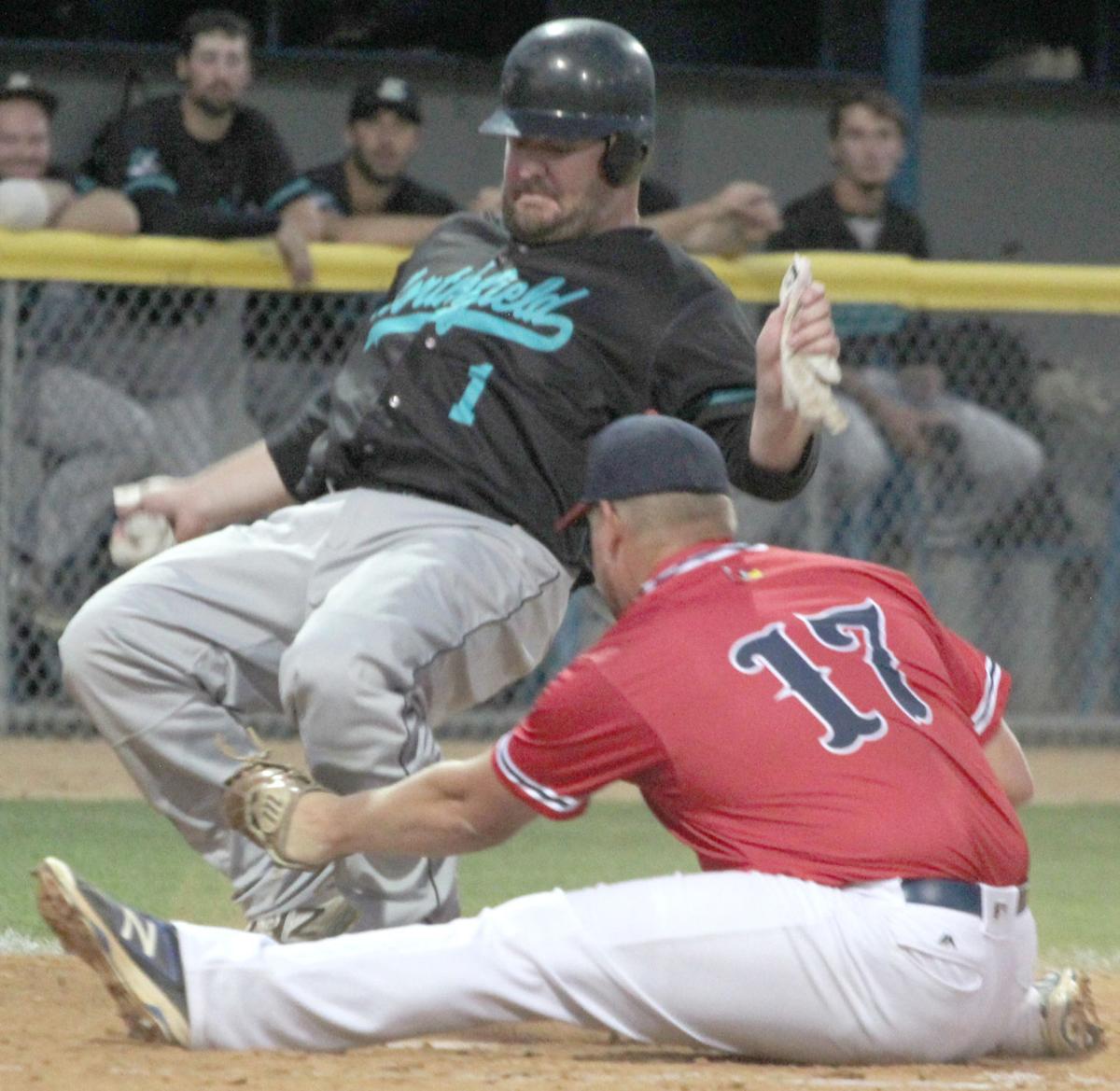 Maybe Bert Blyleven is right, pitchers are the best athletes on the field. Chanhassen pitcher John Straka makes a sliding tag at home plate after receiving a throw from catcher Ben Livorsi for the final out of the third inning Aug. 28 versus Northfield. 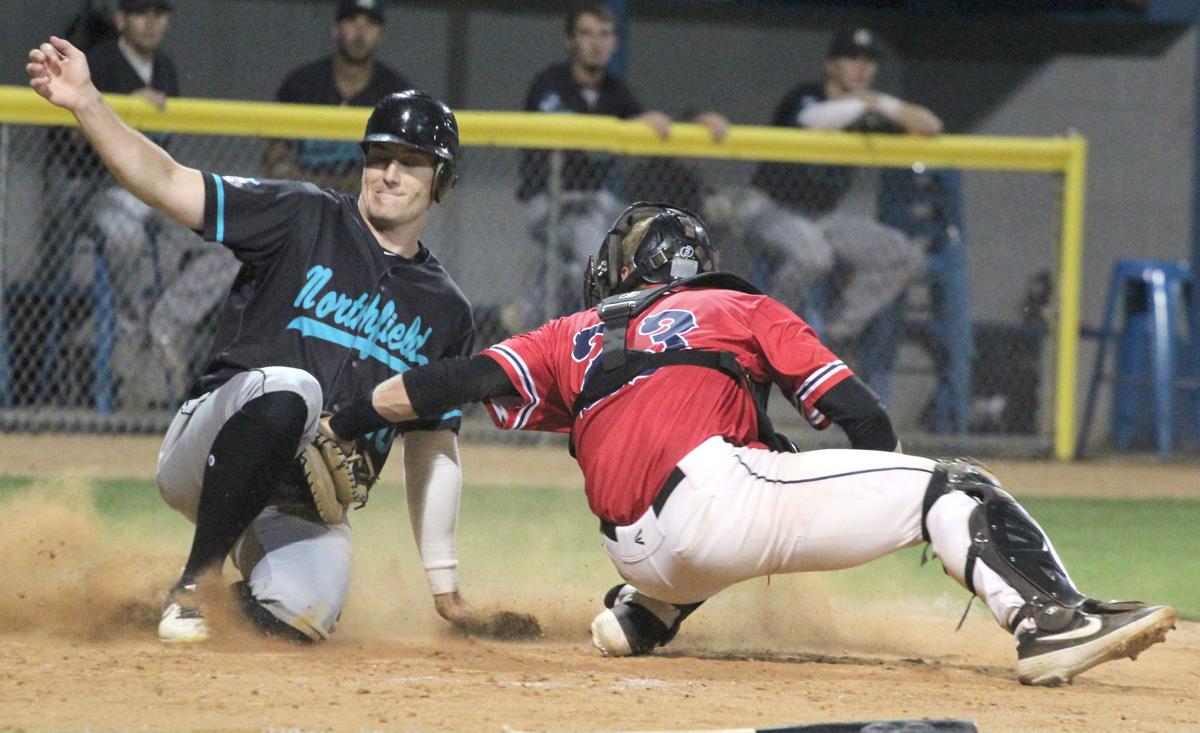 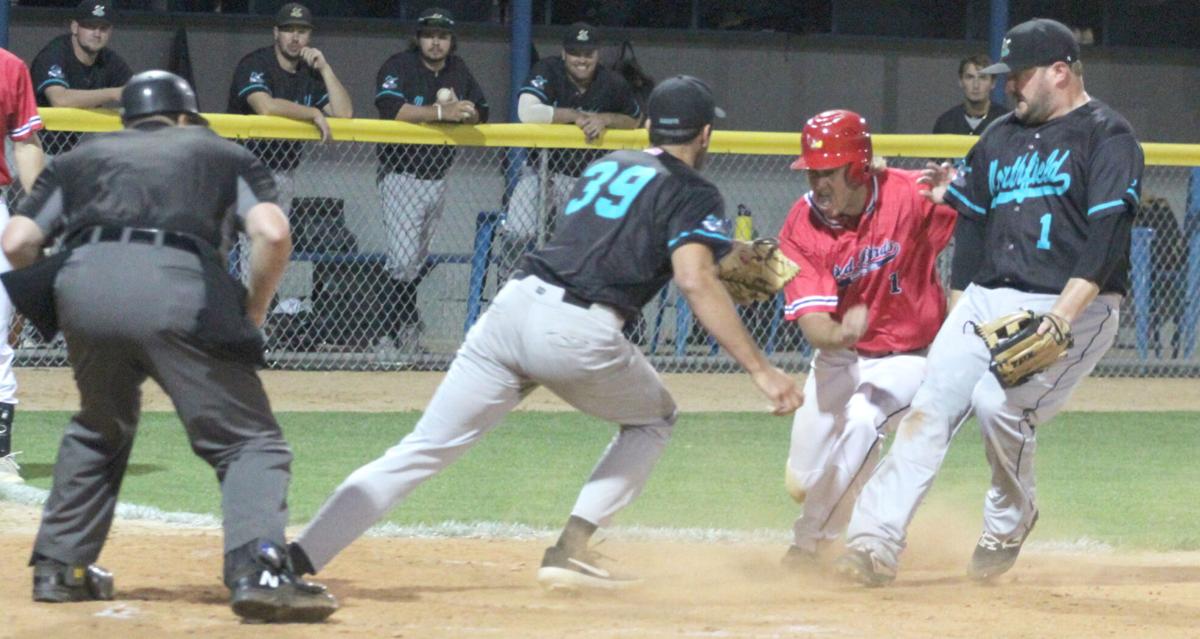 Brandon Arnold tries to squeeze between the Northfield pitcher and third baseman, attempting to score from second base on a throw to the backstop. 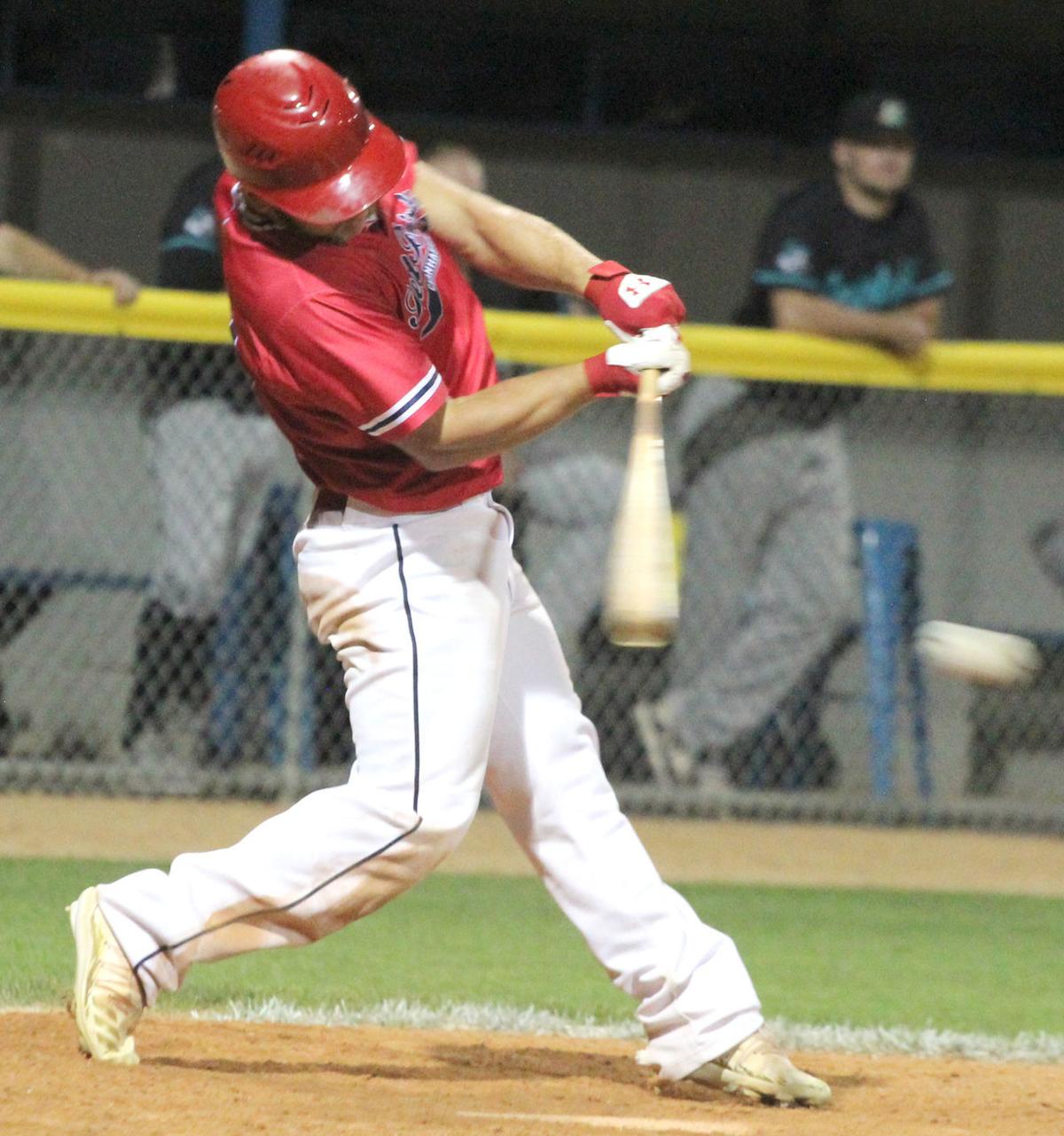 Derek Smith comes up clutch with the first of two-RBI singles in a 5-4 Chanhassen win over Northfield Aug. 28.

Maybe Bert Blyleven is right, pitchers are the best athletes on the field. Chanhassen pitcher John Straka makes a sliding tag at home plate after receiving a throw from catcher Ben Livorsi for the final out of the third inning Aug. 28 versus Northfield.

Brandon Arnold tries to squeeze between the Northfield pitcher and third baseman, attempting to score from second base on a throw to the backstop.

Derek Smith comes up clutch with the first of two-RBI singles in a 5-4 Chanhassen win over Northfield Aug. 28.

Tommy Thompson was a junior in high school when he took the mound in game two of the Class B State Amateur Baseball Championship in Hamburg in 2017.

It was boy versus men, the Mudhens claiming a second consecutive state title.

Matched up again in 2020, Thompson now referred to as Tom or Thomas, showed a different presence on the mound.

Thompson allowed just four hits and one run with three strikeouts, leaving in a 1-1 game in the third round of the Class B State Tournament Aug. 30 in Shakopee. Future brother-in-law and manager Brandon Arnold did the rest.

Arnold's two-out single in the eighth inning proved to be the game-winner, a 2-1 win over Miesville. Chanhassen, state champions in 2018 and 2019, are two wins away into the final weekend Sept. 4-6 at Schleper Stadium in Shakopee.

"(Ryan) Diers said it best. Thomas has come a really long way since that first state start. He's been great for us all summer and he was great for us again today. We knew after the first inning we had the good Thomas. He was the reason we had a chance to win late," Arnold said.

Arnold, who took over managerial duties from Mike Ralston and his father, Mike Arnold, this summer, said it's been more challenging than he thought it would be.

Chanhassen is loaded with talent. How to play them all, how to manage youth versus experience in different spots.

One thing he learned over the years was trusting his pitchers and what they were saying. John Straka was on the ropes early, unable to find the strike zone in a second-round game versus Northfield Aug. 28. Straka called Arnold aside in the dugout, wanting to keep going.

Seven innings, one run allowed later, Chanhassen was moving on with a 5-4 win over Northfield.

Against Miesville it was left-handed reliever Chris Choles. One inning of relief, go to Miles Nablo or first-year Red Bird Brandt Thompson for the ninth inning. Choles asked for the ball. He was ready in the ninth. Arnold listened.

"Losing (Logan Spitzack), Dom (Reed) from last year, we knew we'd need new guys to step up. We've gotten that from a bunch of guys. No matter who's out there on the mound for us, I have a lot of confidence in them to get the job done," Arnold said.

Ben Livorsi's solo home run in the second inning stood up against Miesville until the seventh inning, veteran outfielder Matt Van Der Bosch coming up clutch with the tying run for the Mudhens.

That left the heroics to the Chanhassen line-up in the eighth inning. Derek Smith, who knocked in two runs in the Northfield win, started the rally with a single. Following a Diers sacrifice bunt and Aaron Pfaff fielder's choice, Arnold was aggressive on pitch one, a fastball, for the go-ahead run with a single.

"Derek is one of those guys that when he gets a shot to play, whether it's starting, coming off the bench, pinch-running, he always seems to play a role in the win. He's had some of our biggest Red Bird hits in the past couple of years, and today was definitely one that got us going that inning," Arnold said.

Michael Jurgella had the Red Birds' only other hit off Miesville starter Deryk Marks between the second and eighth innings.

With three wins in the books, Chanhassen now winners of 21 straight, enter the final weekend in a good spot. That was the case in 2017, Miesville spoiling the Red Birds' run with two Labor Day wins.

In 2018 and 2019, Chanhassen fought back through the losers bracket to win titles with two wins on the final day over Miesville and Dundas. So, while Friday's contest with Moorhead, No. 1 versus No. 2 in Class B, is a big one, win or lose, Chanhassen is in the hunt for a three-peat.

"Cold Spring posted a crazy stat. The final four teams (Chanhassen, Miesville, Moorhead, Cold Spring), one of those teams have been involved in a Class B championship game dating back to 2012. That just shows you the teams that are left. We were sitting there after the first weekend thinking any of the final eight teams could win it all," Arnold said.

That means the Brewers and ace Adam Ernst versus the Red Birds and ace John Straka, 7:30 p.m. on Friday, Sept. 4, at Schleper Stadium in Shakopee. The two teams played 14 innings in the state tournament in 2019, the Red Birds victorious 2-1.

"Honestly, we're just happy to be playing this summer and still in this tournament. You look across Class B, the talent there is, every team has a really good arm and a couple more after that. We knew winning another state title was going to be tough and next weekend is going to be just that. It will take everything we have to get it done," Arnold said.

Cold Spring and Miesville play in an elimination game at 1 p.m. on Saturday, Sept. 5. The winner takes on the Friday loser at 4 p.m.

The championship round is Sunday, Sept 6 at 1 p.m. with a second game following, if necessary.

Chanhassen survived a second late-game rally, moving into the double elimination portion, the final four, of Class B with a 5-4 win over Northfield on Aug. 28.

A 1-1 game in the fifth inning, Smith's RBI-single through the hole on the right side plated Jackson Goplen, who moved into scoring position on a stolen base, one of seven in the game for the Red Birds.

Derek Smith pokes an RBI single past a diving Aldon Severson to put the Redbirds back on top pic.twitter.com/uzKJedz4yL

An Arnold single and stolen base, a Jurgella run-scoring double and a Zach Hoffmann RBI-single quickly made it 4-1 in the sixth inning. Chanhassen added a fifth run on a Smith bloop single with the infield drawn in.

Straka, who struggled finding the zone in the third inning, walking two, the bases loaded with two outs, found the all-important third out in a different way. A pitch bouncing off of the glove of Livorsi behind home plate, Straka sprinted to cover the plate, a tag out on a bang-bang throw ended the threat.

Every time Straka seemed to be laboring, he found ways to get the big out, finishing with 12 strikeouts in allowing one run over seven innings.

Knights nearly make it back with an RBI double from Scott Benjamin and a two-RBI single from Aldon Severson, but Tim Maus grounds out to end the game with the tying run on first.

Chanhassen moves on to Sunday, Northfield is done pic.twitter.com/iQuew2eQnL

Northfield scored three times in the ninth inning, the tying run at first base when the final out -- Jurgella to Hoffmann -- was recorded.