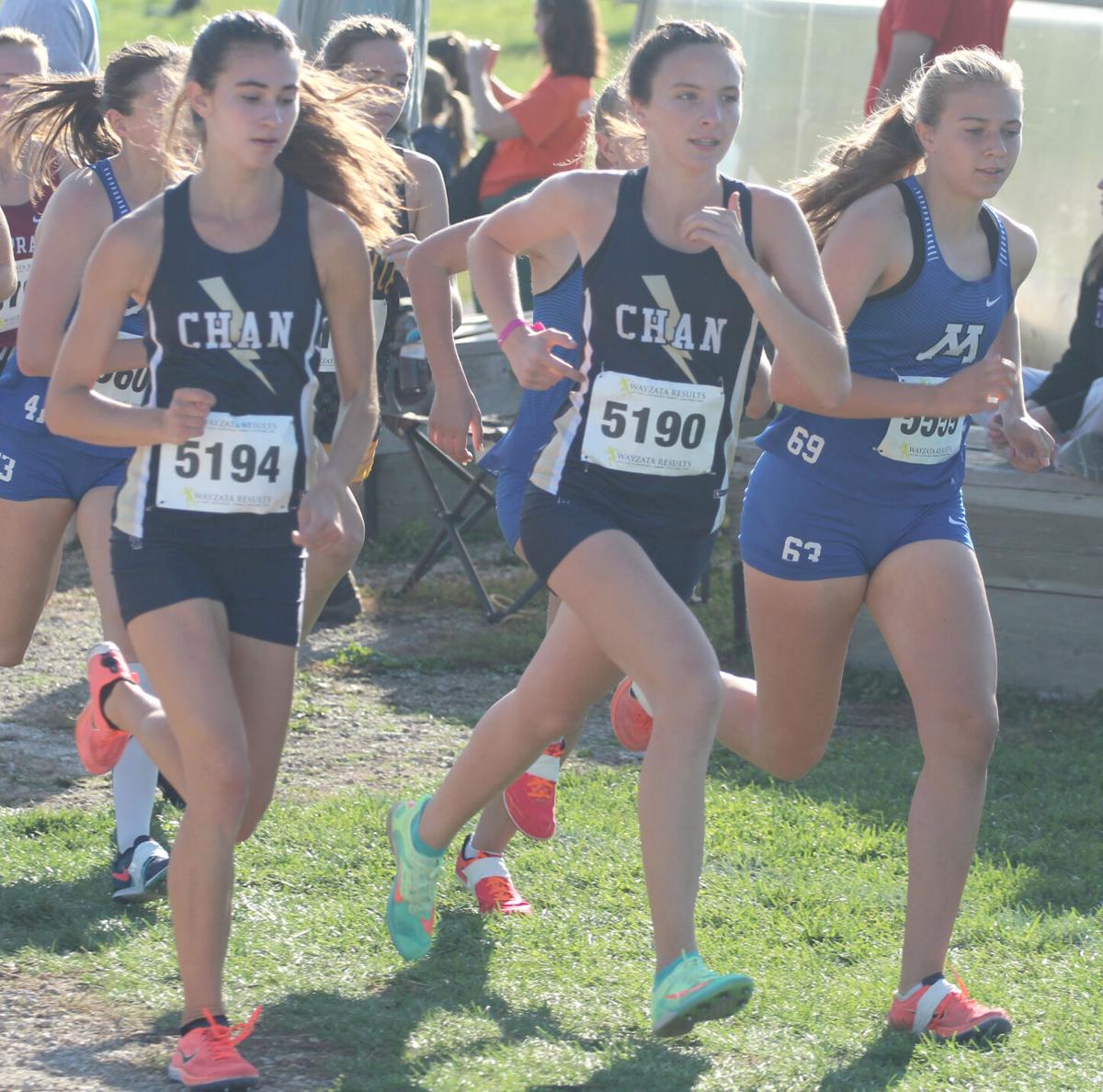 Chanhassen's Izzy Roemer and Marissa Long along with Minnetonka's Ella Graham work upfront at the start of an early October race at Gale Woods Farm. All three runners returned to the course on Oct. 26, qualifying individually for the state meet. 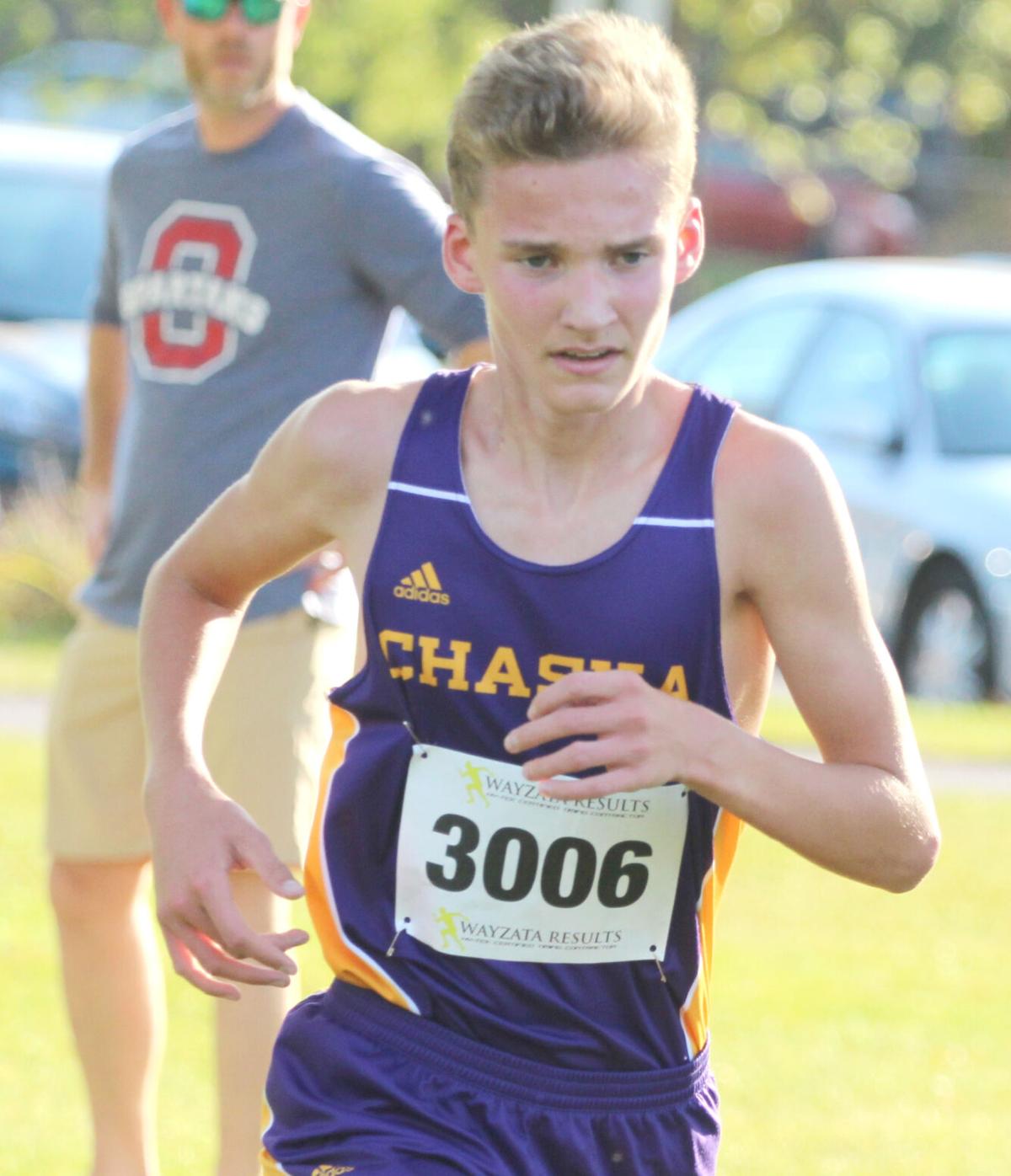 Chaska's Nolan Sutter became the program's first state qualifier since 2018 (Dylan Schaefer and John Starkey) with a seventh-place finish at the Section 2AAA Meet on Oct. 26 at Gale Woods Farm.

Chanhassen's Izzy Roemer and Marissa Long along with Minnetonka's Ella Graham work upfront at the start of an early October race at Gale Woods Farm. All three runners returned to the course on Oct. 26, qualifying individually for the state meet.

Chaska's Nolan Sutter became the program's first state qualifier since 2018 (Dylan Schaefer and John Starkey) with a seventh-place finish at the Section 2AAA Meet on Oct. 26 at Gale Woods Farm.

Marissa Long had a run of a lifetime. Izzy Roemer did everything she could to hang onto a state qualifying spot; one the Chanhassen senior wasn't sure she had secured until the final team standings were posted.

Chanhassen and Chaska will be represented with three total individuals at the Class AAA State Cross Country Meet on Nov. 6.

Chaska sophomore Nolan Sutter earned his first trip to the state meet with a seventh-place clocking of 16 minutes, 41.5 seconds, on the Gale Woods Farm course in Minnetrista.

Long's new strategy of taking out the first two miles quicker worked well, a 21-second advantage over the field. A lead the Storm sophomore did not surrender, winning in a career-best 18 minutes, 19.45 seconds.

"Marissa ran lights out today. We talked about not really relying on a 'race plan,' so to speak, as so many times we get in our own heads when they don’t go as was planned. Instead the plan was to just get out there and compete and let their natural competitive instincts play out. Marissa did just that," Chanhassen coach Anita Woodrow said.

Long's previous best time came in her last race at the Metro West Conference Championships, a victory in 18:30.

"She went for it, committed to leading and never doubted herself. She really has become confident in her racing and trusting in herself. What more can one ask for?" Woodrow said.

The coach said the transformation over the last two seasons for Long, who ran a personal-best 20:04 on the same course in 2019, is something to marvel.

The 18:19 time matches a program-record set by Anastasia Korzenowski -- the record book states 17:28, though coaches are pretty sure the distance was off in that Mankato meet years ago.

One thing is official, Long has the fastest time for a Chanhassen female runner on the Gale Woods Farm course; one of the more challenging runs each season for the Storm.

Long was well ahead of ranked senior Maggie Wagner of Edina, who placed second in 18:40.18.

Roemer ran with Long during the first mile, but fell back seven positions over the second mile, eventually placing 15th in a time of 19:12.2.

If spectators and coaches were counting how many runners not in Minnetonka and Edina uniforms -- the No. 1 and 2 ranked teams in the state -- that were ahead of Roemer, the count was six. The number of state qualifiers from non-qualifying teams.

But when the team standings were compiled, fifth-ranked Prior Lake placing second to Edina, 39-52, three points ahead of Minnetonka, the Skippers as a team were out of state, and Roemer was in.

"I am so incredibly excited for Izzy. It was so tough out there not knowing which teams were leading (between Edina, Minnetonka and Prior Lake) to be able to communicate with her what place individually she was in at any point in the race. It was more just letting her know she is still in the hunt," Woodrow said.

It was a fitting ending for a Chanhassen runner that has bounced back from injury, gave it a good run at winning a state title in track, and now is racing at state in cross country for the first time.

"She’s a fighter and is giving everything she has each race. She has come a long way these past three years and I know this is all just a stepping stone to continued greatness she will experience for years to come," Woodrow said.

Chanhassen edged Waconia and Eden Prairie for fourth place in the team standings with 134 points.

Nyen, in her first season on varsity, just two years removed from running times near 25 minutes, solidified herself as runner No. 3 this season for the Storm.

"Tatumn is a very talented all-around athlete. She’s so strong which makes her a great hill runner for cross country and is a natural competitor. Just a steady grinder out there," said the Storm coach.

With three freshmen and four middle schoolers in the varsity line-up, Chaska was eighth in Section 2AAA with 208 points.

In the boys race, led by state qualifier Nolan Sutter, Chaska was sixth of eight teams with a score of 153.

Chanhassen had two juniors in the field with Colin Scheller the third runner across the finish line for the Storm in 17 minutes, 51.64 seconds, in 27th place. Andrew Colleran added a time of 19:20.68 as well.

Minnetonka, ranked No. 2 in the Class AAA boys rankings, finished with 32 points, nine ahead of Edina, for the Section 2AAA title.

It is the first trip to state for the Skipper boys since 1992, and just the fourth time in program history.

The Skippers had a clean sweep of the boys titles with junior Nick Gilles earning medalist honors for the second straight season (he was the Section 6AA champion in 2020) with a winning time of 15:33.57; an eight-second victory over Hootie Hage of Prior Lake.

Minnetonka, which had won every girls race this season in-state -- the top Minnesota team in a race in Sioux Falls as well -- will send three runners to state despite the third-place team finish.

The Class AAA State Cross Country Tournament is Saturday, Nov. 6, at St. Olaf College in Northfield. The boys race at 9:30 a.m. with the girls taking off at 10:30 a.m.