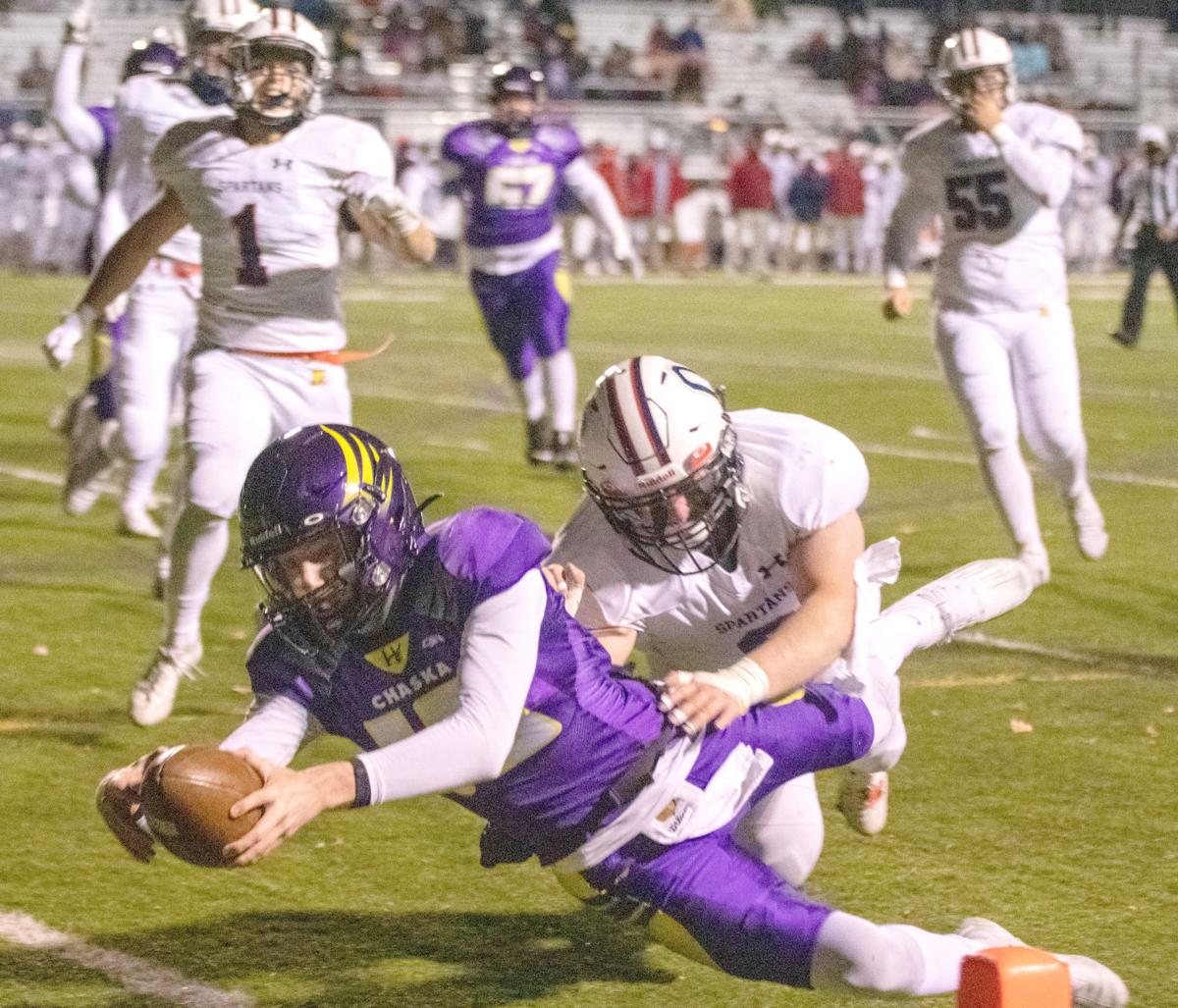 Chaska quarterback Matthew Paul dives for the end zone for a first-quarter touchdown, a rush of 10 yards for the senior. 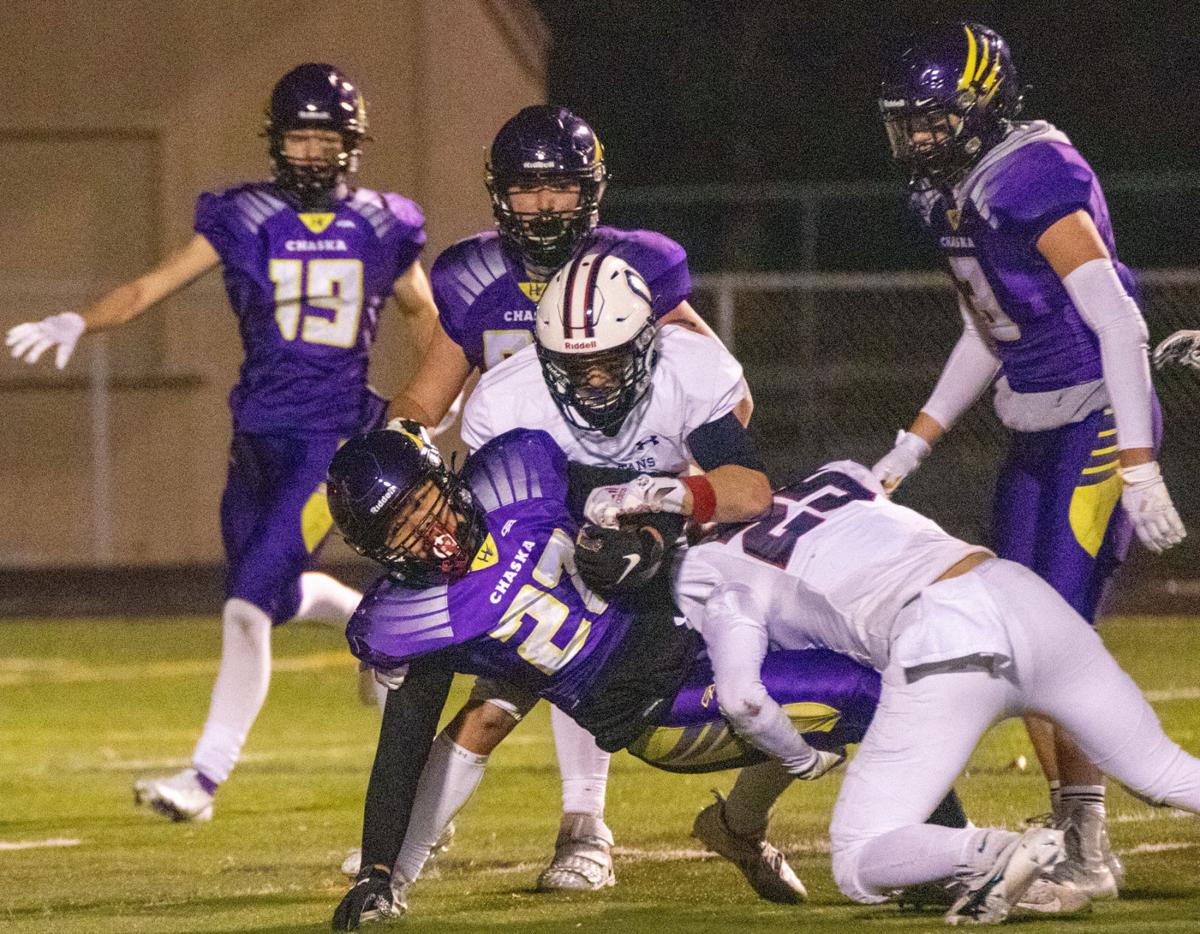 Dewandis Youmans dives forward for a first down, part of a nine-rush for 51 yards game for the Chaska running back. 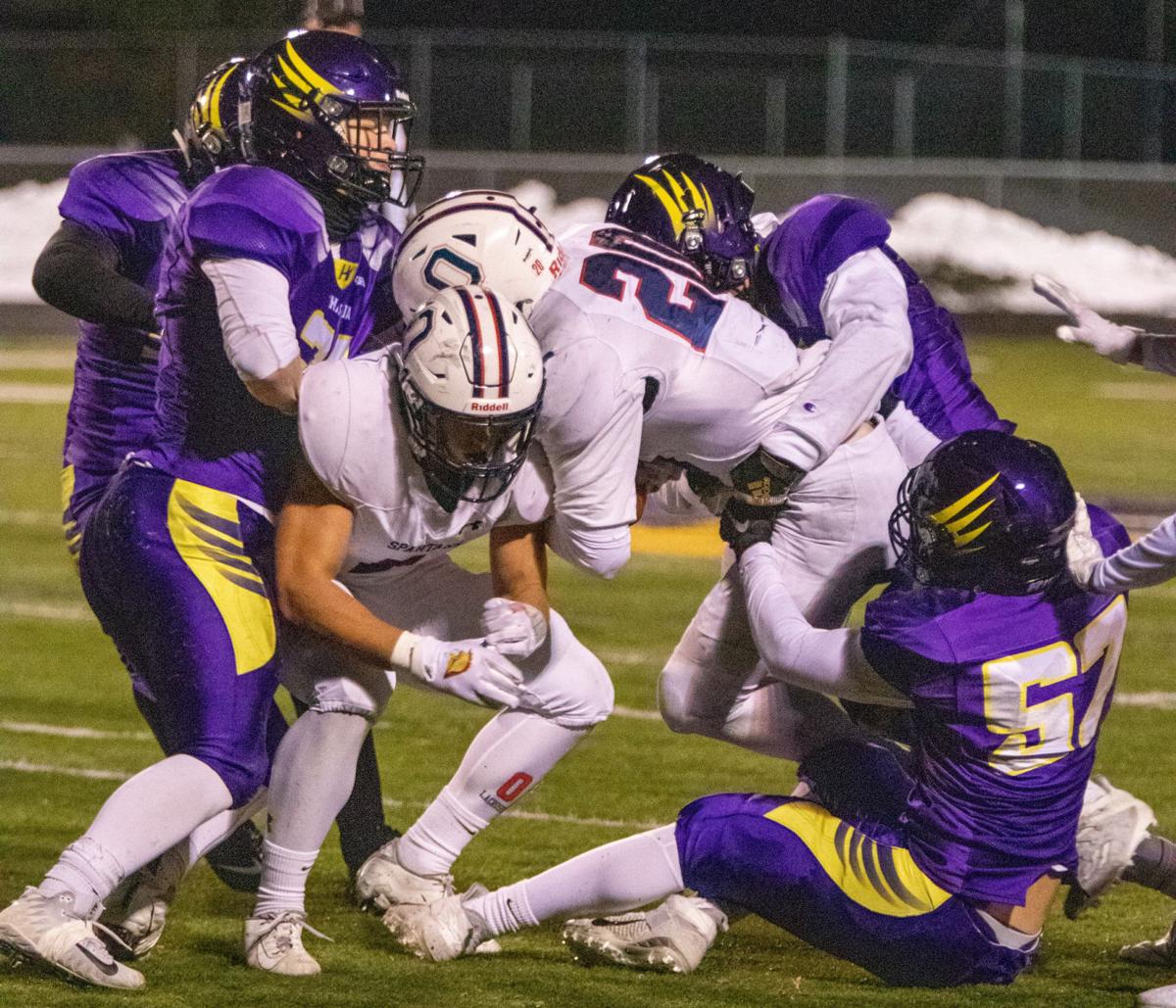 The Chaska defense, including Isaiah Martig (57), swallows up Aidan Mueller, lead back for Orono.

Chaska quarterback Matthew Paul dives for the end zone for a first-quarter touchdown, a rush of 10 yards for the senior.

Dewandis Youmans dives forward for a first down, part of a nine-rush for 51 yards game for the Chaska running back.

The Chaska defense, including Isaiah Martig (57), swallows up Aidan Mueller, lead back for Orono.

Scoring 49 points in a season-opening win, Chanhassen was anxious to play rival Chaska in week two. Then before the first practice of the week, Oct. 12, the Storm found out that wasn't going to happen.

COVID concerns forced the game to be cancelled. The Storm unable to play on Oct. 16.

Chanhassen players took to social media, hoping for the game to be rescheduled. The work of athletic directors from Chaska, Chanhassen, Hopkins, and Robbinsdale Armstrong made it happen. A new date of Oct. 30.

Returning to the field Oct. 23 in week three, Chanhassen showcased everything that makes them one of the favorites in Section 2-5A this season, a 27-14 win at Benilde-St. Margaret.

The Storm scored three times in the first quarter and had a 27-7 advantage until the final minute of regulation.

Following a 3-and-out on the opening drive, a high snap over the punter led to a wall of Chanhassen players looking to make the tackle in the end zone. A fumble put the ball on the ground, the recovery for six points from Storm sophomore Reed Gizinski.

After a 25-minute delay for injured Storm senior Tucker Pinkerton -- who was taken off the field by stretcher; x-rays at the hospital were negative and he was released -- Chanhassen added to the lead at 14-0 on a Charlie Coenen 16-yard jet sweep.

The two teams traded scores separated by 75 seconds; the first on a 30-yard pass from Red Knight quarterback Charlie Hansen to Jonny Woodford on the third play of the drive.

Chanhassen took just three plays as well for the 21-7 lead as Coenen returned the ball to midfield, and hauled in a 40-yard catch from quarterback Riley Funk to set-up a Jason Collins 5-yard score.

Collins in for the score! 21-7 Storm, still in the first quarter. pic.twitter.com/hBtzokwGTd

The Storm defense did the rest, twice producing turnover on downs in Chanhassen territory, while Eli Mau and Chris Ewing fell on top of a fumble near midfield early in the second half.

Chanhassen played the second half without leading rusher Collins, who was hurt (knee) on the opening kick-off of the third quarter. Receiver Josh Kirchoff also was injured on a tackle after a catch.

Junior Brady Grandstaff shouldered much of the running load, Funk scoring from the goal line for the 27-7 lead midway through the third quarter.

As temperatures drop, the importance of consistently being able to run the ball and move the chains becomes necessary in Minnesota high school football.

It was the running game that rallied Chaska in a week two win, 19-12, over Robbinsdale Armstrong.

It was the running game that unbeaten Orono used to score on four of its first five drives, never punting the football after the first quarter in a 24-14 win on Oct. 23 at Chaska High School.

Three times the Hawks defense forced a fourth down in the second half, each time Orono quarterback Teddy Deters moved the chains with his feet.

Chaska, trailing 21-7 after three quarters, got within seven on a fade pass from Brayden Sanders to Ethan Bachmann, the junior receiver getting his feet down inbounds, with 10:23 to play.

Orono, though, as it did all game, moved the ball three or four yards at a time, picking up a pair of short fourth-down runs. Jack Kalman's 34-yard field goal with 2:58 left extended the advantage to 24-14.

Chaska completed three passes to get into Spartan territory, but a Matthew Paul was intercepted, sealing the third win of the season for Orono.

It was only the seventh loss in 41 home games dating back to 2013 at the Hawks Nest for Chaska; the second to Orono, which clinched the Suburban District title in 2015 on the same field.

Deters' arm and legs were the difference for Orono all night. His 40-yard run on the Spartans' second drive of the game set-up the first score, a Deters' 9-yard pass to Noah Arneson.

Chaska countered, a mix of runs from Dewandis Youmans and Jack Boyle, just one completed pass on the scoring drive to Colin Dussault, as Paul capped off the score with a 10-yard option run at 7-7 early in the second quarter.

It was Deters to Arneson on Orono's third drive, a catch of 43 yards on a deep ball, putting the ball at the Chaska 6. Workhorse back Aidan Mueller was rewarded with a touchdown run through a pair of Hawk arm tackles.

Chaska drove the length of the field before halftime, Paul connecting with Bachmann on an off-balanced throw while being flushed out of the pocket to put the Hawks in contention for a score.

Facing 4th-and-2, under 40 seconds on the clock, a high snap inside the Orono 15 turned the ball over on downs.

Orono added to the lead in the third quarter, picking up a 3rd-and-12 and 3rd-and-6 as well as a short fourth-down run to get a second touchdown from Mueller at 21-7.

The drive consumed more than five minutes of the third quarter.

Chaska got back in the game on the next drive, a Sanders-led unit, the final 19 yards through the air to Boyle and eventually Bachmann after a false start penalty moved the Hawks back to the 11.

While no large gains, Chaska's run game was effective, getting 51 yards on nine rushes from Youmans and 32 yards from Boyle on six carries.

Needing a stop with 10 minutes to play, Orono punched the ball down the field, consuming more than seven minutes, picking up a pair of fourth-and-shorts. Deters' first-down run inside the 20-yard line set-up the sixth field goal in three games for Kalman.

Bradley Walker's interception in Orono territory clinched the win for the Spartans.

Litchfield is a talented team. The Dragons showed that in week one in a victory over Glencoe-Silver Lake. They showed it in week two over Watertown-Mayer.

On Friday, despite a home game being moved to the turf at Rockford High School, the Dragons felt right at home, scoring six first-half touchdowns, nine for the game, in a 62-14 final.

Litchfield is 3-0 on the season, while Holy Family Catholic is winless.

The Fire twice countered Litchfield touchdowns in the first half. A Carver Kasper 72-yard kick-off return came up 15 seconds after the Dragons went up 14-0.

Holy Family Catholic quarter Jacob Kirsch's 65-yard scoring run was the first play of the drive after Litchfield went up 28-6 on the fourth touchdown pass from Ben Alsleben, the third to receiver Bennett Lecher.

The Fire got no closer than 28-14 - Kirsch hitting Tien Foudray for the 2-point conversion -- as Litchfield scored 28 second-quarter points, lead 42-14 at halftime.

Kirsch finished with a career-high 101 rushing yards. Holy Family Catholic ran 36 plays to 74 for the Dragons.

Will Zay (seven) and Joseph Richelsen (five) were leading tacklers for the Fire.