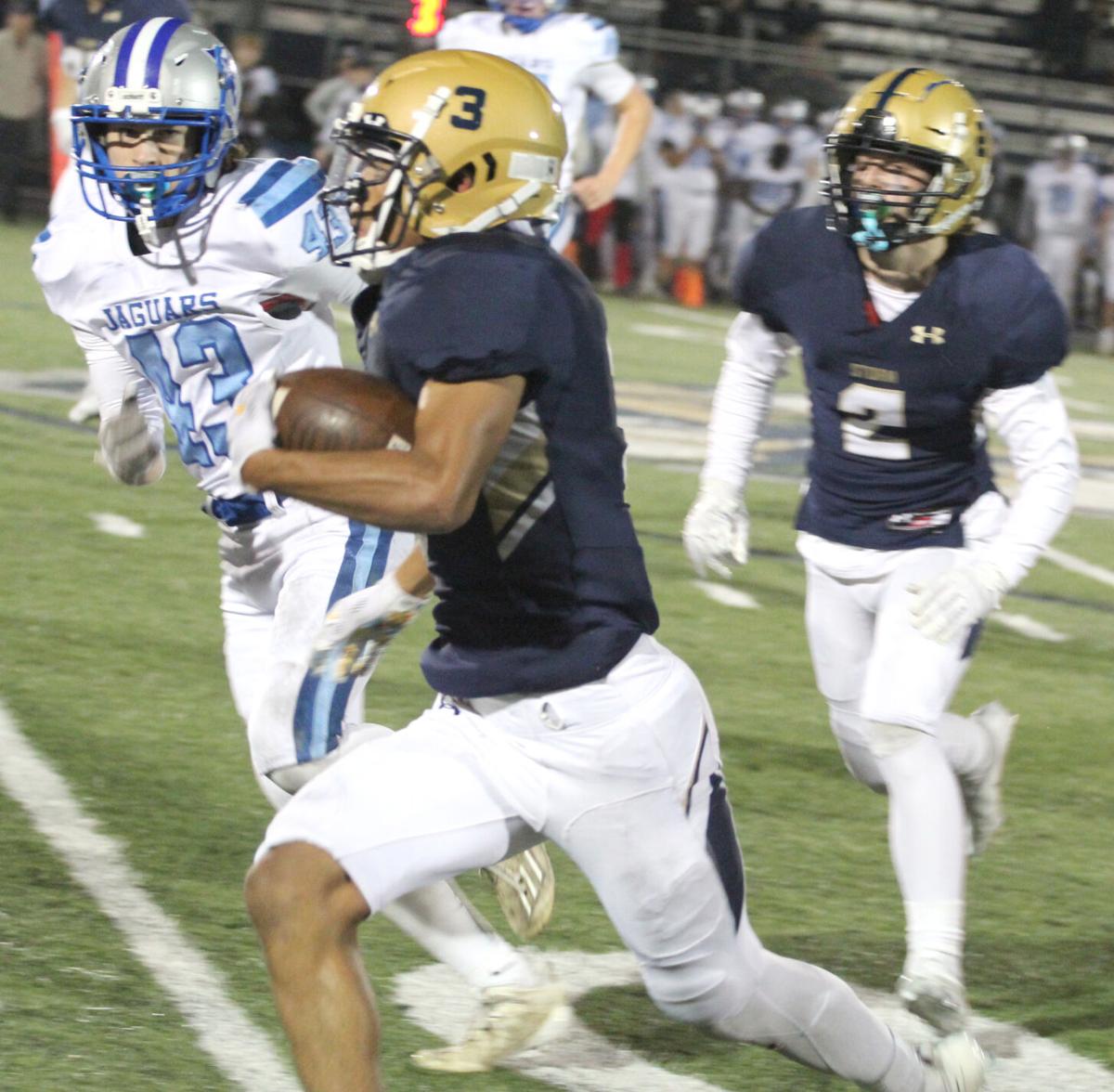 Chanhassen running back Maxwell Woods finds room down the left sideline for a first-down run in the second quarter. Woods was the team's leading rusher in a 49-0 win on Oct. 20. 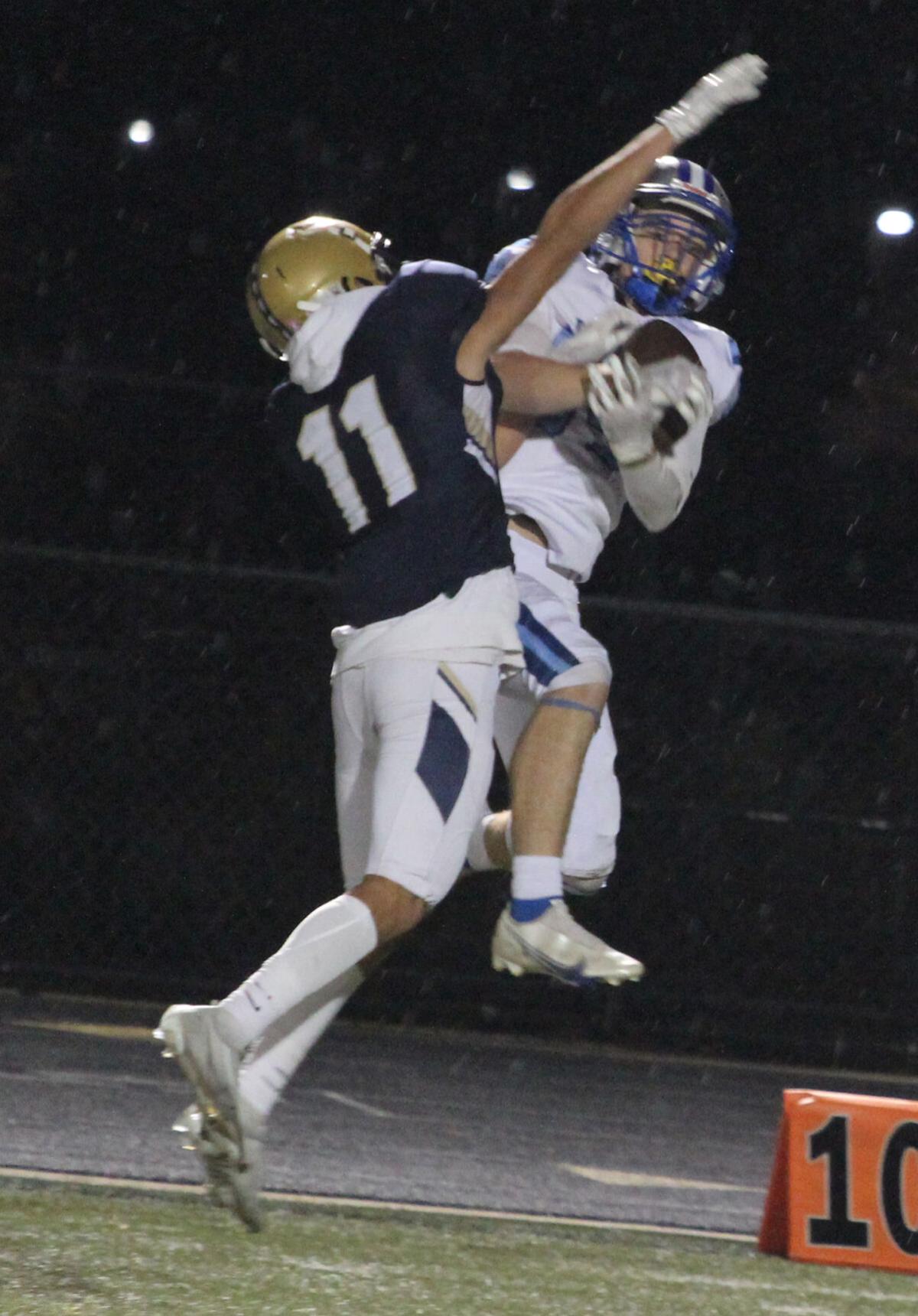 While a Bloomington Jefferson receiver was able to get his hands on the ball, Chanhassen defender Parker Renner stripped the ball loose for an incomplete pass. 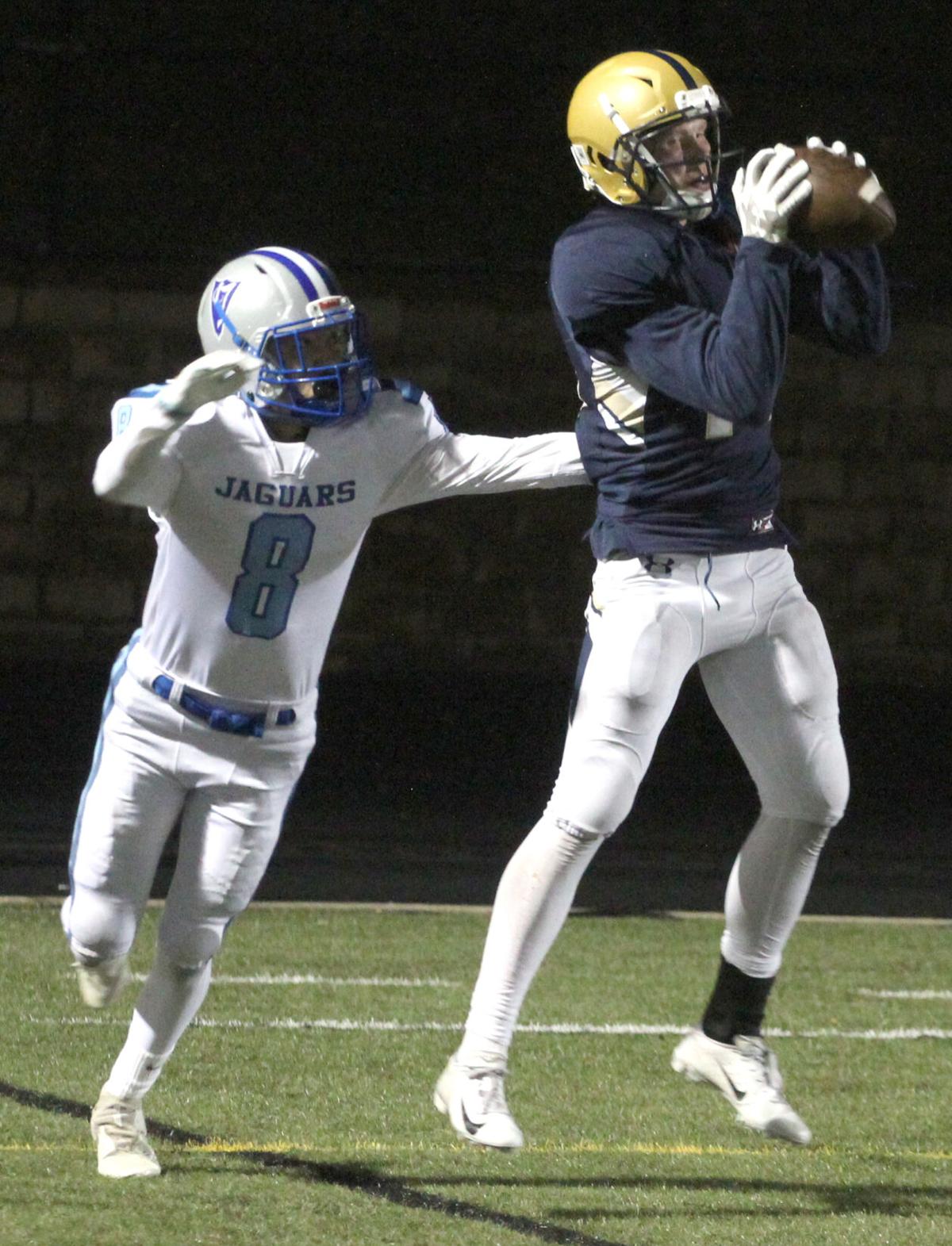 Chanhassen running back Maxwell Woods finds room down the left sideline for a first-down run in the second quarter. Woods was the team's leading rusher in a 49-0 win on Oct. 20.

While a Bloomington Jefferson receiver was able to get his hands on the ball, Chanhassen defender Parker Renner stripped the ball loose for an incomplete pass.

The third seed likely already locked up, Chanhassen didn't have much to play for Oct. 20 in the eighth and final game of the regular season.

Someone forgot to tell the Storm that.

The Storm scored four times in the first half, defeating Bloomington Jefferson 49-0 to finish the regular season with a 6-2 record.

Chanhassen will open up the Section 2AAAAA playoffs on Tuesday, Oct. 26 at 7 p.m. at home against Waconia. The winner draws unbeaten and fourth-ranked Chaska in the semifinals on Saturday, Oct. 30 at 3 p.m.

Charlie Coenen, coming off a four-touchdown game in a 31-21 win over Holy Angels, totaled 60 yards, 41 receiving and a 19-yard pass to quarterback Grant Muffenbier, on the opening drive. His 3-yard score gave Chanhassen a 7-0 lead on a Dmitry McDougle kick.

Following a Kurt Schaefer interception and a long run from Maxwell Woods, the sophomore had his number called again two plays later, a 3-yard score for the 14-0 advantage.

A blink of the eye in the second quarter and it was 28-0 as Muffenbier hit Josh Kirchoff in between two defenders on a 4th-and-15 pass from the 25-yard line with the quarterback and Coenen hooking up with a minute left in the half from 17 yards out.

It was the second shutout of the season for the Storm, and sixth time the defense allowed a touchdown or less.

Woods finished with a career-high 101 rushing yards on 12 carries with Muffenbier completing 11-of-14 passes for 163 yards. Coenen hauled in six receptions for 86 yards.

With Brayden Sanders leaving the game with an ankle injury, Chaska turned to running back Jack Boyle to shoulder the responsibilities of running the offense.

Coming off a game in which he rushed 42 times, Boyle's workload was similar, scoring three times, including the game-winner from two yards out in the fourth quarter in a 21-14 win over St. Louis Park on Oct. 20.

The victory capped a perfect 8-0 season; the second time the Hawks have accomplished the feat in five years (2017).

Chaska will receive a bye in Section 2AAAAA and will host a semifinal game at 3 p.m. on Saturday, Oct. 30. The teams would be Chanhassen or Waconia, squads Chaska beat 6-2 and 7-0 this season.

Boyle finished off back-to-back drives in the second quarter from five and 25 yards out for the 14-7 lead at halftime. He ran out of the Wildcat formation where the back takes the direct snap from the center for the second half.

Hawks Jack Boyle coming right at you for a 23-yard Chaska TD! 14-7 Chaska, 3:05 to play in 1st half. pic.twitter.com/iryPPnVFeg

He carried the ball 36 times for a career-high 261 yards. As a team, Chaska had a total of 51 offensive plays.

St. Louis Park, which came into the game with a 5-2 record, fresh off a remarkable last-second win over Waconia, tied the game at 14 in the second half.

Clinging to the 7-point lead, Chaska's defense twice had to come up with stops, the final Oriole play falling incomplete as a host of Hawks came through the line forcing quarterback Will Dvorak to release the throw early.

DJ Pegues' 10-yard run with 77 seconds left broke up a shutout bid from Foley in Holy Family Catholic's 26-7 loss on Oct. 20 in Victoria.

Daniel Dahmen accounted for three of the four Falcon scores on a short pass in the first quarter, and a pair of quarterback sneaks in the second quarter.

Caden Ruhoff's 1-yard plunge in the second half extended Foley's lead to 26-0.

Pegues finished with 79 rushing yards on 14 attempts for the Fire. Quarterback Gavin Frye was 7-for-14 for 61 yards through the air and two interceptions. Kieran Paidosh pulled in two receptions for 30 yards.

Michael Richelsen had eight solo tackles, 15 total, one for a loss, to lead the defense.

Holy Family Catholic (0-8) will likely travel to Dassel-Cokato in the Section 2AAA quarterfinals at 7 p.m. on Tuesday, Oct. 26.