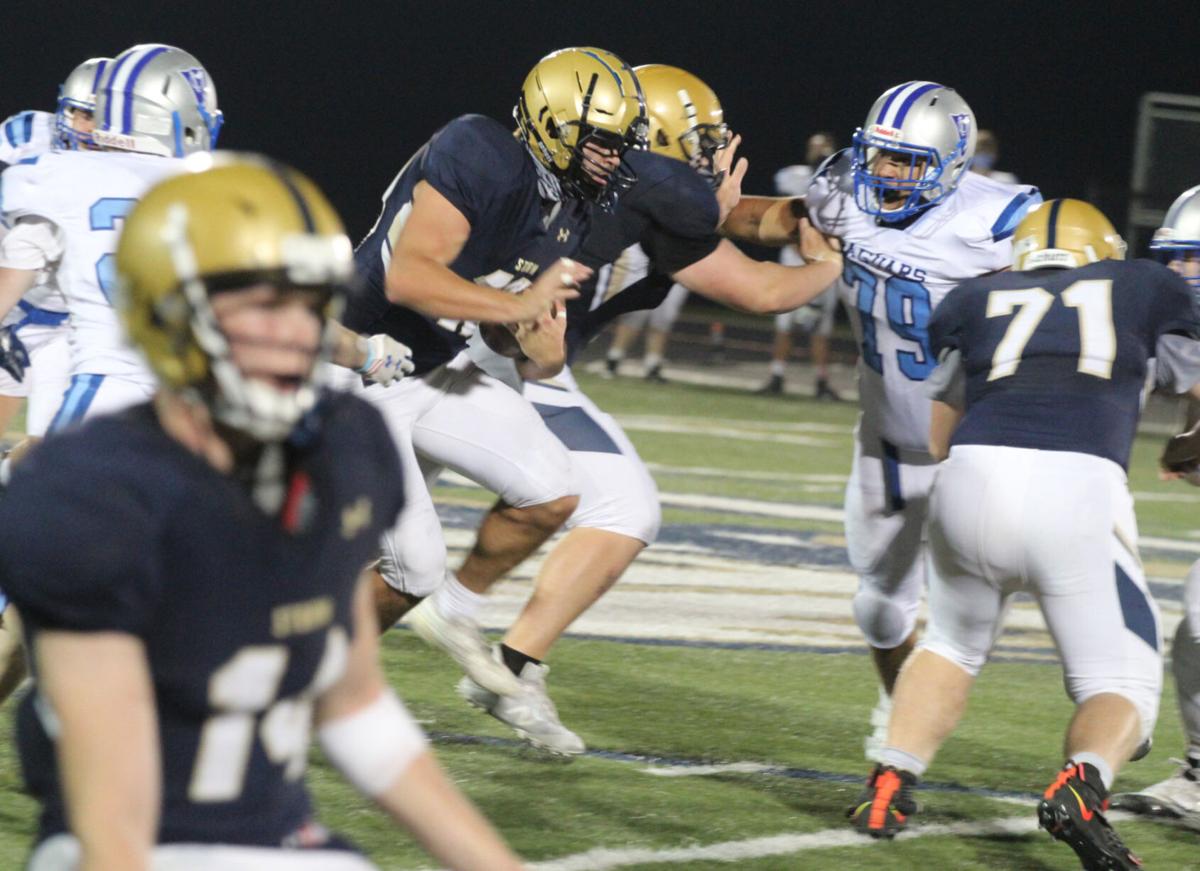 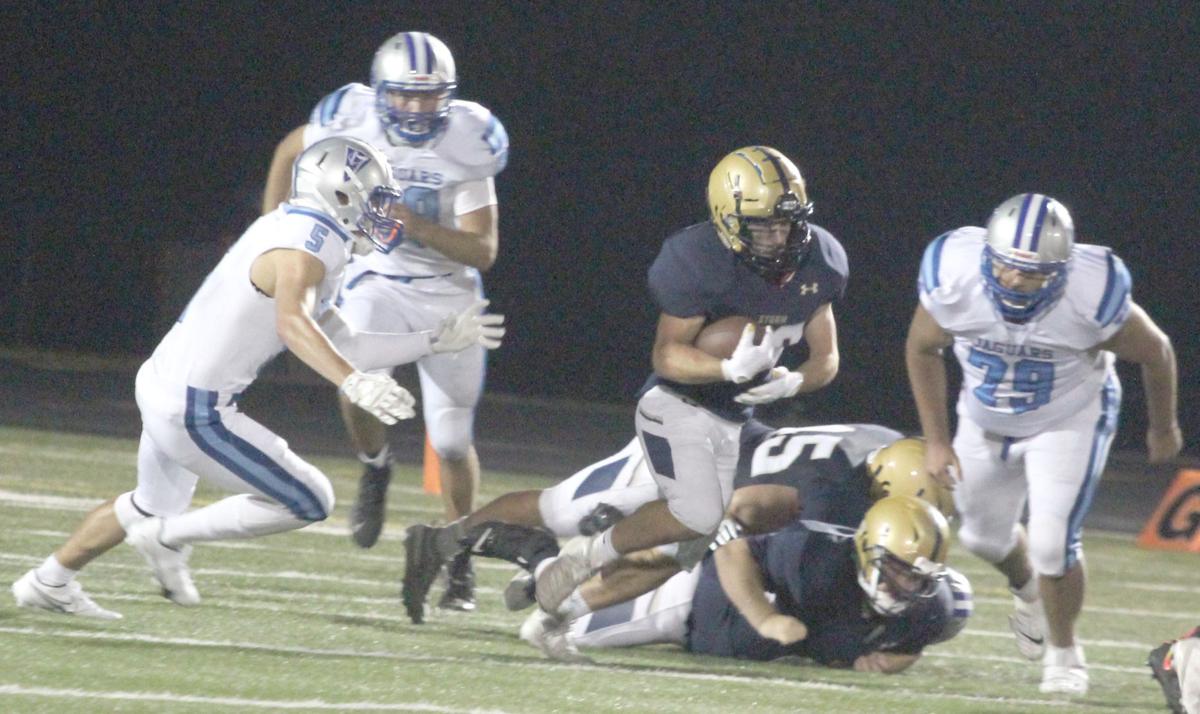 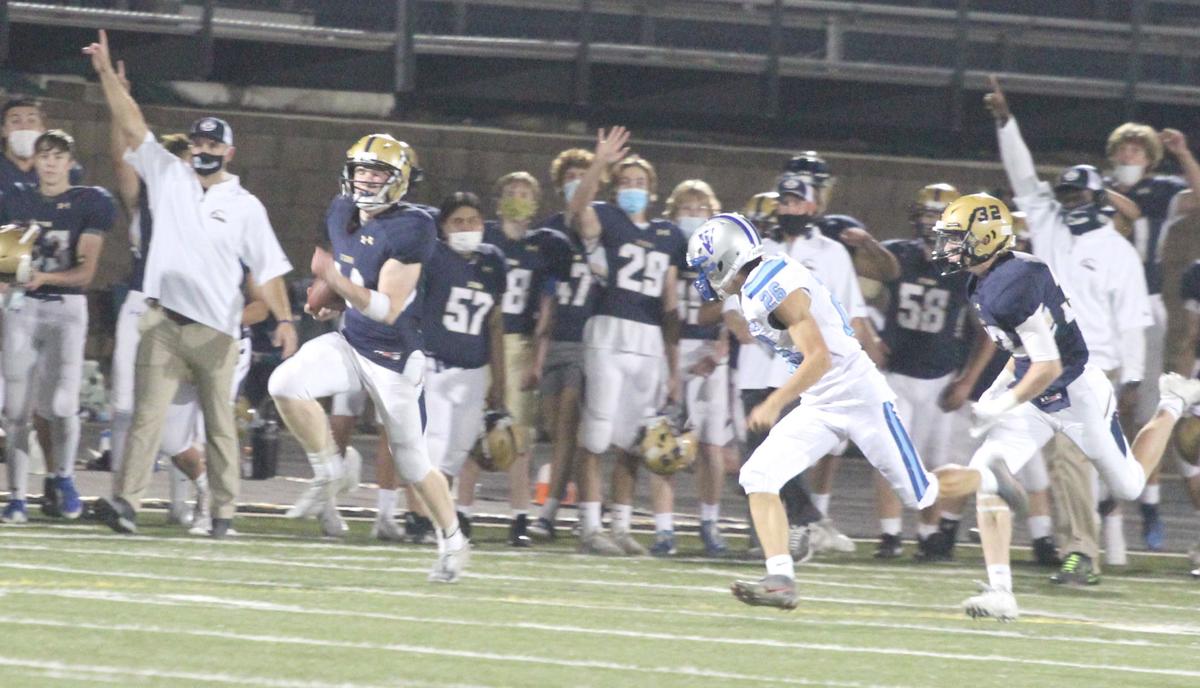 Coaches and teammates react as Charlie Coenen sprints down the sideline, breaking two tackles for an 89-yard kickoff return to open the second half in Chanhassen's 49-28 win over Bloomington Jefferson.

Coaches and teammates react as Charlie Coenen sprints down the sideline, breaking two tackles for an 89-yard kickoff return to open the second half in Chanhassen's 49-28 win over Bloomington Jefferson.

The National Football League's Los Angeles Raiders had "thunder" in Bo Jackson, and "lightning" in Marcus Allen in the 1980s.

The Chanhassen football team in 2020 has its own dynamic duo in the backfield. A bulldozer in 210-pound, 6'2" Jason Collins, and a humvee in Tucker Pinkerton, who was listed in last year's roster as 5 1/2 feet, but plays much bigger, and and quicker, having added muscle to his frame for his senior year.

"I'm a lot less timid. I'm not as scared to hit the hole and see what happens. The (offensive line) definitely did a great job tonight," Collins said.

"It really does start up front. Those guys have been putting in the work, just like everyone else. We all, as juniors last year, learned so much from the seniors and this year that's our role, teaching the young guys, and it's a good feeling," Pinkerton said.

Both backs were on display in the 2020 season opener versus Bloomington Jefferson Oct. 9, a 49-28 victory.

Collins rushed 14 times for 168 yards and two touchdowns in the second half. Pinkerton added 13 carries for 123 yards.

"Everyone getting together -- we weren't sure we were going to have a season -- playing well, having a great time together," Collins said of his first impression of his team.

"Even the times we weren't sure we were going to have a season, we were trucking through, grinding everyday, getting up early in the morning, practicing and getting in the weight room. I'm so glad we get to be out here and compete," Pinkerton said.

Falling behind 7-0 after the opening drive, Chanhassen reeled off 27 consecutive points, a 13-point halftime lead that ballooned to as many as 28 points in the third quarter.

"I had a lot of jitters. All of that changes though when that ball kicks off, you hit a couple of kids. It all changes after that. You get in a zone, we're playing football together and we're 1-0. We practiced hard, we played hard and now we have to get ready for next week," Chanhassen senior linebacker Ryan Maschka said.

Quarterback Riley Funk connected with Charlie Coenen for touchdowns of 25 and 14 yards, as well as tight end Brenden Radtke from 10 yards.

Coenen also opened the second half with an 89-yard kickoff return for touchdown, while Brady Grandstaff found the end zone in the first half from 13 yards.

A dominating offensive performance for the Storm.

Bloomington Jefferson, with returners in quarterback Carter Hanson and running back Roosevelt Cage, moved the ball effectively at times. Cage scored twice for the Jaguars, while Hanson connected with Sam Wanzek for a catch and run for 70 yards in the second half.

A strong task in the opening week for the Chanhassen defense, which returns six starters and has the makings of being a unit that can stuff the run and attack the quarterback.

"I think we have a chance to be dominant this year (defensively). Jefferson came out, played super hard, they have a bunch of weapons. I think at times we really shut them down, got off the field. Guys really put the time in the weight room and I think it will show," Maschka said.

Chanhassen will get another test in week two -- a contest that could see a temperature difference of 30 degrees from week one -- in defending Class 5A state champion Chaska.

The Storm last beat the Hawks in 2017, a season in which they went undefeated in the regular season.

The 2018 meeting came down to the final minutes, Chanhassen's late go-ahead score was countered by Chaska on their final drive.

"I want that Jug. I've never won it. With this group of guys, it's meant to be," Collins said.

"We went to elementary school, middle school together. It's a little heartbreaking to not get the job done against kids you know. It doesn't matter that they won a state championship last year. It's a new season. We want to show them we're the better team this year," Pinkerton said.

"We've been friends with those boys forever. It does hurt. It hurts real bad. I've been through it the last two years. This year is different. We are so built and solid, core all the way up. We have depth. We have heart. We're going to be dangerous," Maschka said.