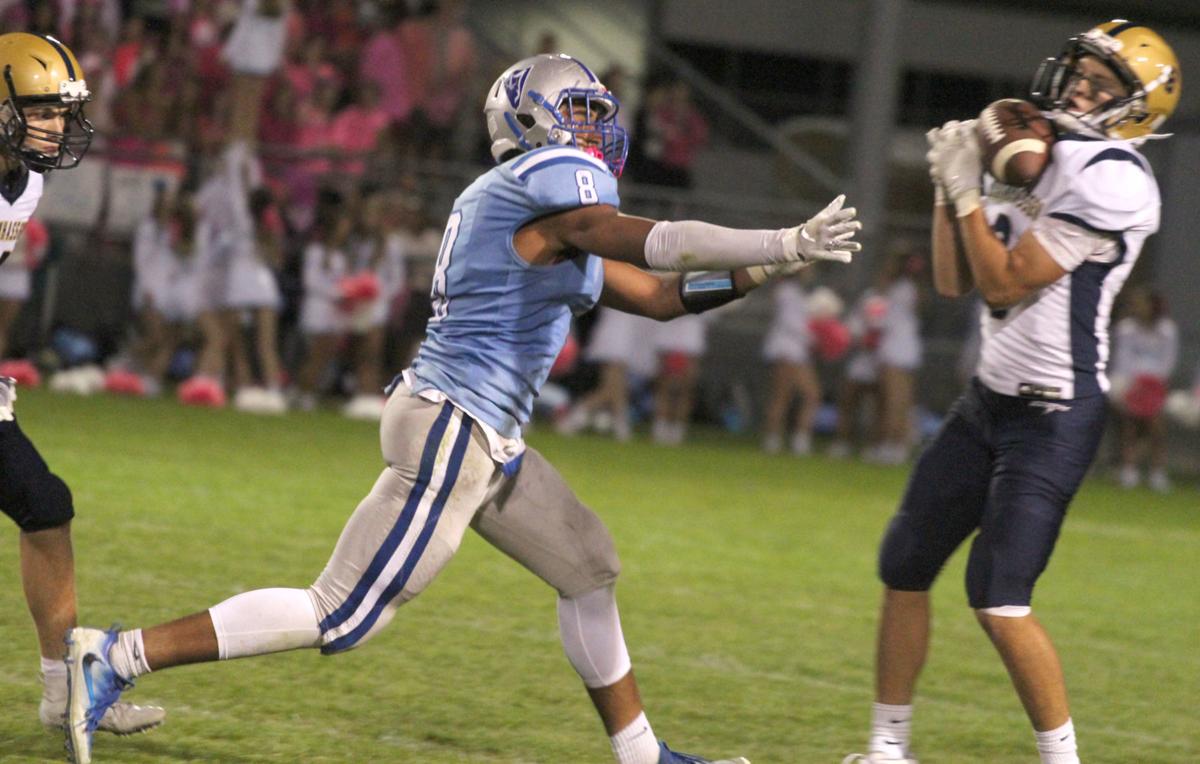 Chanhassen senior linebacker Mason Kalvoda intercepts a fourth-quarter pass, one of six takeaways from the defense, in a 24-6 win over Bloomington Jefferson on Aug. 29. 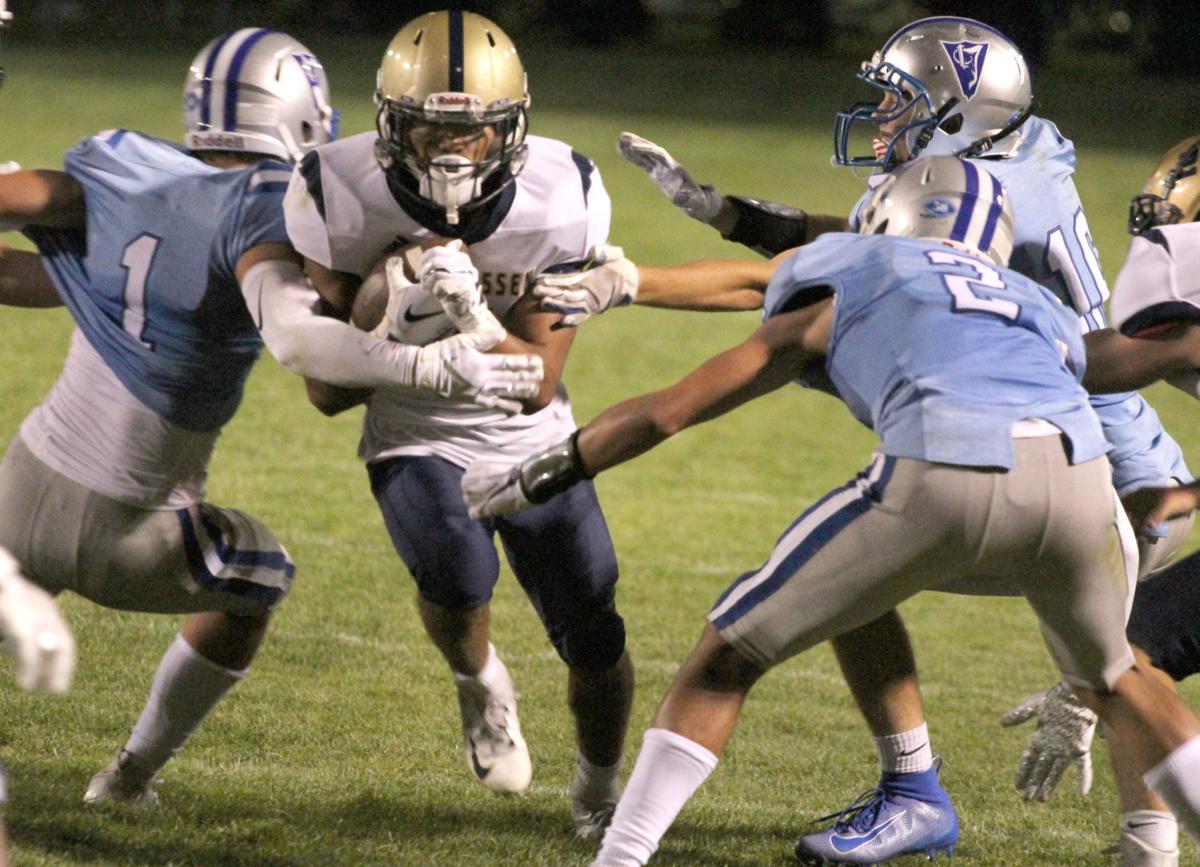 Rolando Alvarez breaks through three Bloomington Jefferson tacklers, setting up a fourth-quarter touchdown, his third of the game for Chanhassen. 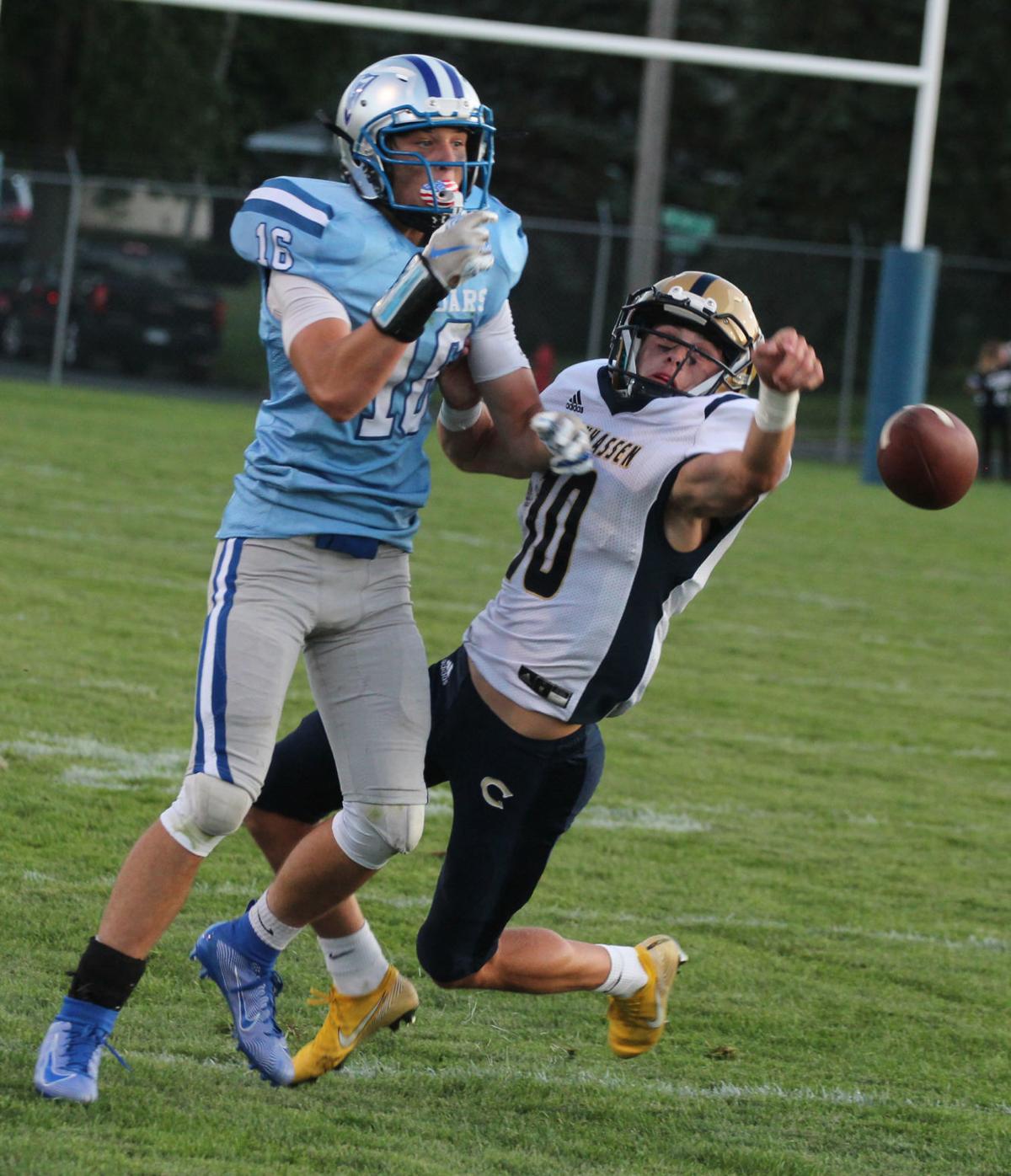 Alex Duea knocks down a Bloomington Jefferson pass attempt in the first half of Chanhassen’s season opener Aug. 29. 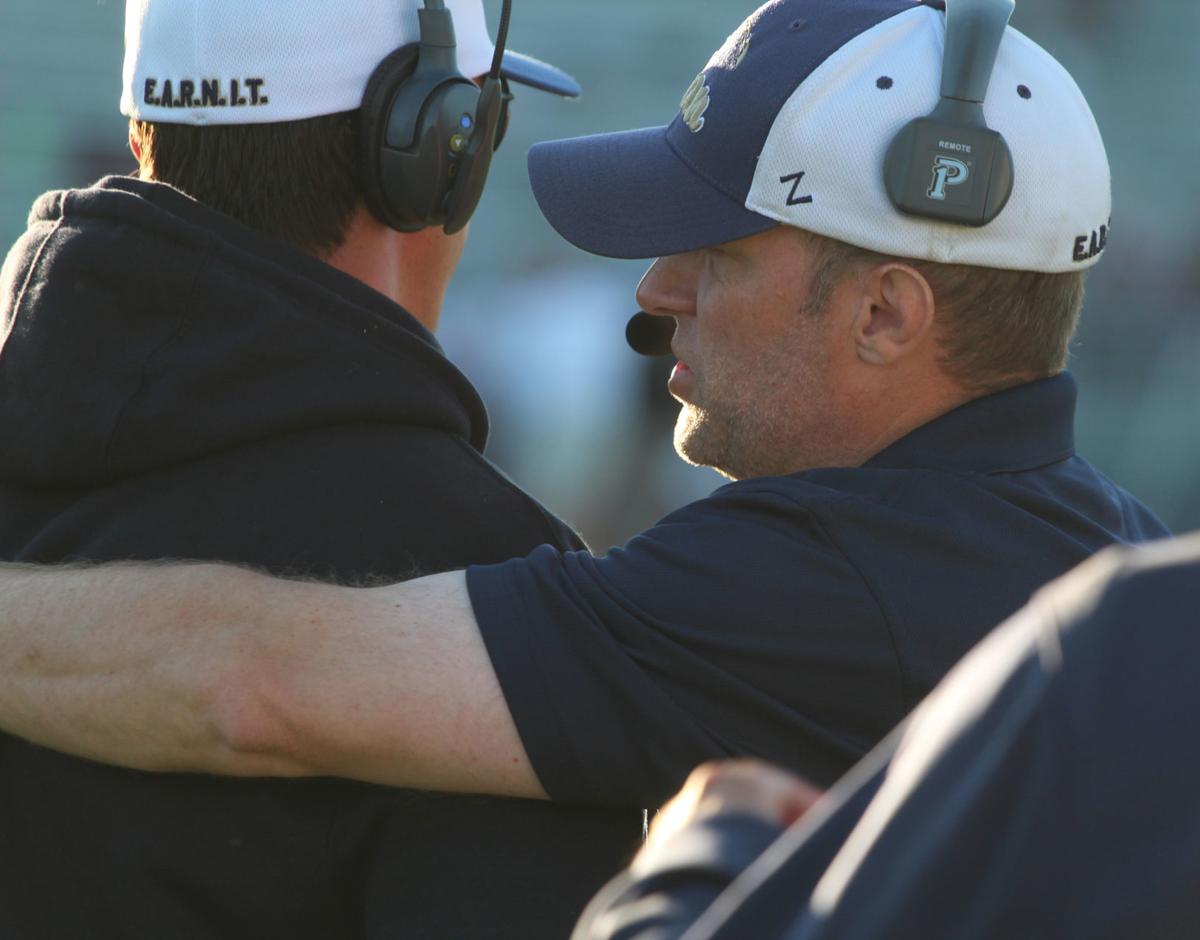 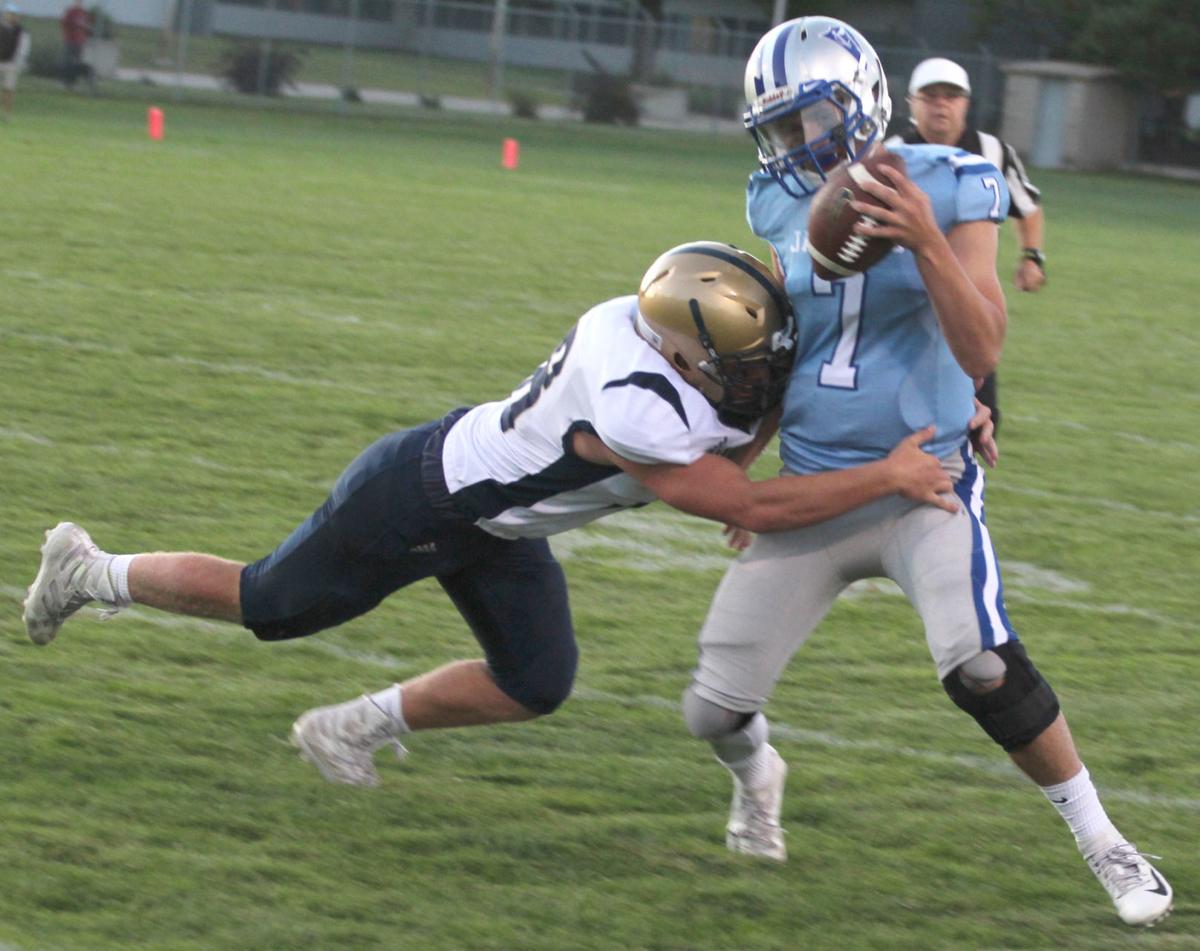 Ryan Maschka with a sack on fourth down for Chanhassen, turning the ball over in Storm territory. 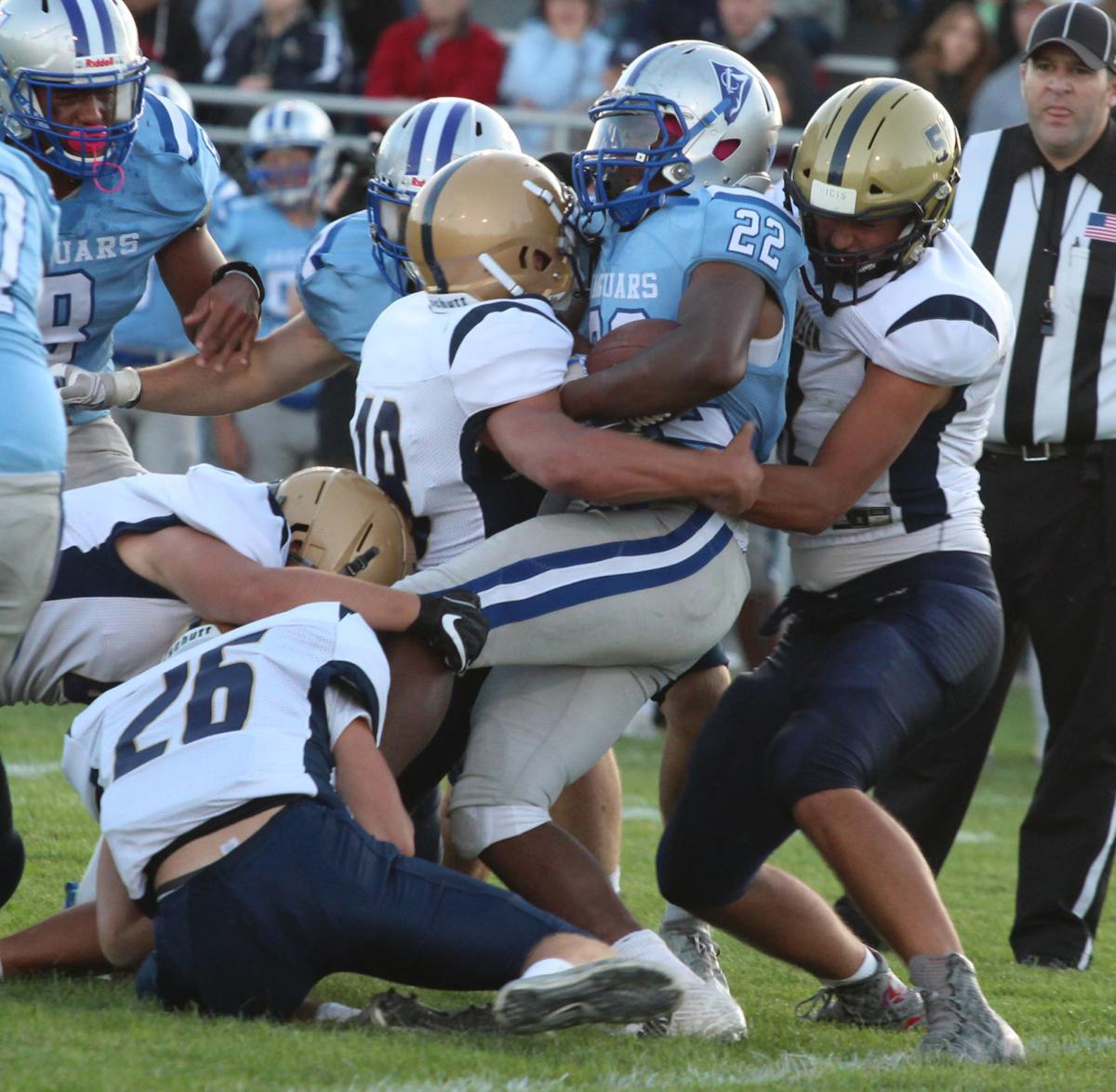 It was a group tackle of Bloomington Jefferson's Roosevelt Cage from the Chanhassen defense in the opening half.

Chanhassen senior linebacker Mason Kalvoda intercepts a fourth-quarter pass, one of six takeaways from the defense, in a 24-6 win over Bloomington Jefferson on Aug. 29.

Rolando Alvarez breaks through three Bloomington Jefferson tacklers, setting up a fourth-quarter touchdown, his third of the game for Chanhassen.

Alex Duea knocks down a Bloomington Jefferson pass attempt in the first half of Chanhassen’s season opener Aug. 29.

Ryan Maschka with a sack on fourth down for Chanhassen, turning the ball over in Storm territory.

It was a group tackle of Bloomington Jefferson's Roosevelt Cage from the Chanhassen defense in the opening half.

Alex Duea was the first player to reach Cullen Nelson. An arm around each other as the final horn sounded, Chanhassen giving the new head coach his first win at Bloomington Stadium Aug. 29.

Duea, the lone starter back from 2018 on defense, a unit Nelson led the last three seasons, called a six-takeaway, six-points-allowed performance "expected."

A slow start led to a furious finish, a 24-6 Storm win over Bloomington Jefferson.

Nelson was presented with the game ball after the game by Chanhassen Athletic Director Cullen Bahn to a loud cheer from the players.

"This win, it's for the boys, it's for Coach Nelson," Chanhassen senior Rolando Alvarez said.

It was the Storm defense that stood out throughout. Nate Heinen fell on a fumble on the third play from scrimmage. Ryan Maschka and Jackson Lakosky intercepted first-half passes before Bloomington Jefferson put the ball on the turf twice more with Mason Kalvoda securing a win with a fourth-quarter pick.

"The defense was super confident. We have a really good group of guys. The chemistry is really good there. We trust each other a lot," Duea said.

Despite limited varsity experience, the first game was never too much for Chanhassen's defensive unit.

Bloomington Jefferson completed just seven of 21 passes for 83 yards. Star receiver Manny Montgomery, who totaled 160-plus yards and two touchdowns versus Chanhassen in 2018, was limited to 31 yards in four receptions.

"That's what we expected at this point. We've been playing that hard all summer. Get ready, it's going to be a good year for the defense," Duea said.

While the defense stood out, Chanhassen's offense had its moments, especially late.

A 7-6 lead through three quarters, Alvarez finished off a 39-yard drive following an Eli Mau tipped punt with a 4-yard touchdown run.

Alvarez, who scored all three touchdowns for Chanhassen, flashed off a physical style to running the football, picking up big yards in big moments.

Alvarez, one of two starters back on offense along with Kenyatta Brannon at tight end, finished with 107 yards.

"I've been putting in the work. Got some boys on the field, doing our thing. I know we're prepared, we're ready. Having a new line, some bigger guys for the first time, it was kind of hectic the first half, but we grasp onto it and just started doing our thing. Once we clicked in the second half, the rest was history," Alvarez said.

Mau's 40-yard field goal, just two yards shy of a school record set in 2016 by Noah Kersten, extended the lead to 17-6 with 4:09 remaining in the fourth quarter.

Alvarez capped the scoring, reaching across the goal line on a 12-yard run the first offensive play following a sixth Bloomington Jefferson turnover.

"I get into the locker room and I say, 'most of you haven't stepped on a field in a varsity game. I'm out here, I'll help you guys, you help me out. You guys block, I'll block for the other guys. We're in this together. As Coach Nelson said, 'earn I.T.,' which means together," Alvarez said.

Bloomington Jefferson twice moved the ball into Chanhassen territory in the first quarter. A fumble ended the opening drive, a high snap over the quarterback forced a punt on the second drive.

A Maschka interception set-up the Storm at the Jaguars' 10, three plays later, Alvarez barrelled through two Bloomington Jefferson defenders and center Josh Clark for the 3-yard score and a 7-0 lead.

Maschka, who saw time at running back as a sophomore, came up with a fourth-down sack to turn the Jaguars over on downs late in the first half in Chanhassen territory.

Bloomington Jefferson took advantage of an early Storm turnover in the second half, a 40-yard drive capped by a Roosevelt Cage 4-yard touchdown run. The extra point blocked, Chanhassen remaining ahead 7-6.

The Storm defense allowed just four first downs the rest of the way.

"Huge win. Coach Nelson great game plan. The whole defense as a whole played great, lights out. That's how we like it," Duea said.

Jason Collins added 61 yards on the ground for Chanhassen, which was held to 3-of-11 passing for 20 yards.

Mau and Cooper Hanson each had four solo tackles with Nate Heinen credited with 14 total tackles.

Chanhassen will have an extra day to prepare for week two, the rivalry match-up with Chaska on Friday, Sept. 6.

No doubt about it, Chanhassen wants an early shot at the defending Section 2-5A champions.

The Storm lost in heartbreaking fashion in the 2018 contest in Chaska. The Hawks host this year's match-up once again.

"Next week, I'm ready. All I'm saying is just bring it. That's it. Our boys are ready, we're hungry. We're going to go out and fight," Alvarez said.

Game time is 7 p.m. Pre-sale tickets will be available in the activities office at Chaska High School. Follow social media pages at the high schools for more information.

Rolando Alvarez burst onto the Chanhassen varsity football scene as a junior. He finished with more than 500 yards on the ground and six touchdowns, an average per carry of 4.2.

His impact so great in his first varsity year, then Storm head coach Mike Bailey caught on with calling Alvarez by his nickname, "Hollywood."

So how did the name come about?

"My seventh-grade coach, Mr. Bob Schaefer, our quarterback's (Jack) dad, called me Hollywood. It was the hair. It kind of caught on. Mike Bailey heard about it and he started calling me that."