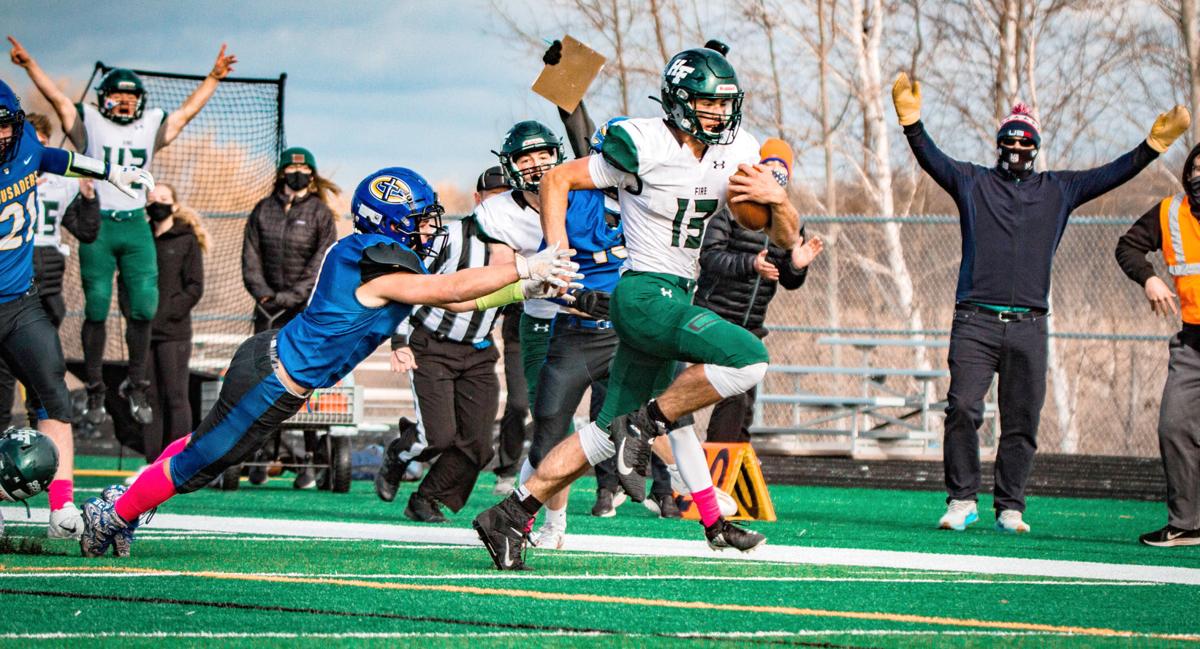 Holy Family Catholic’s sideline celebrates as quarterback Jacob Kirsch sprints toward the end zone for the go-ahead and eventual game-winning touchdown in a 22-11 win over St. Cloud Cathedral on Oct. 31. 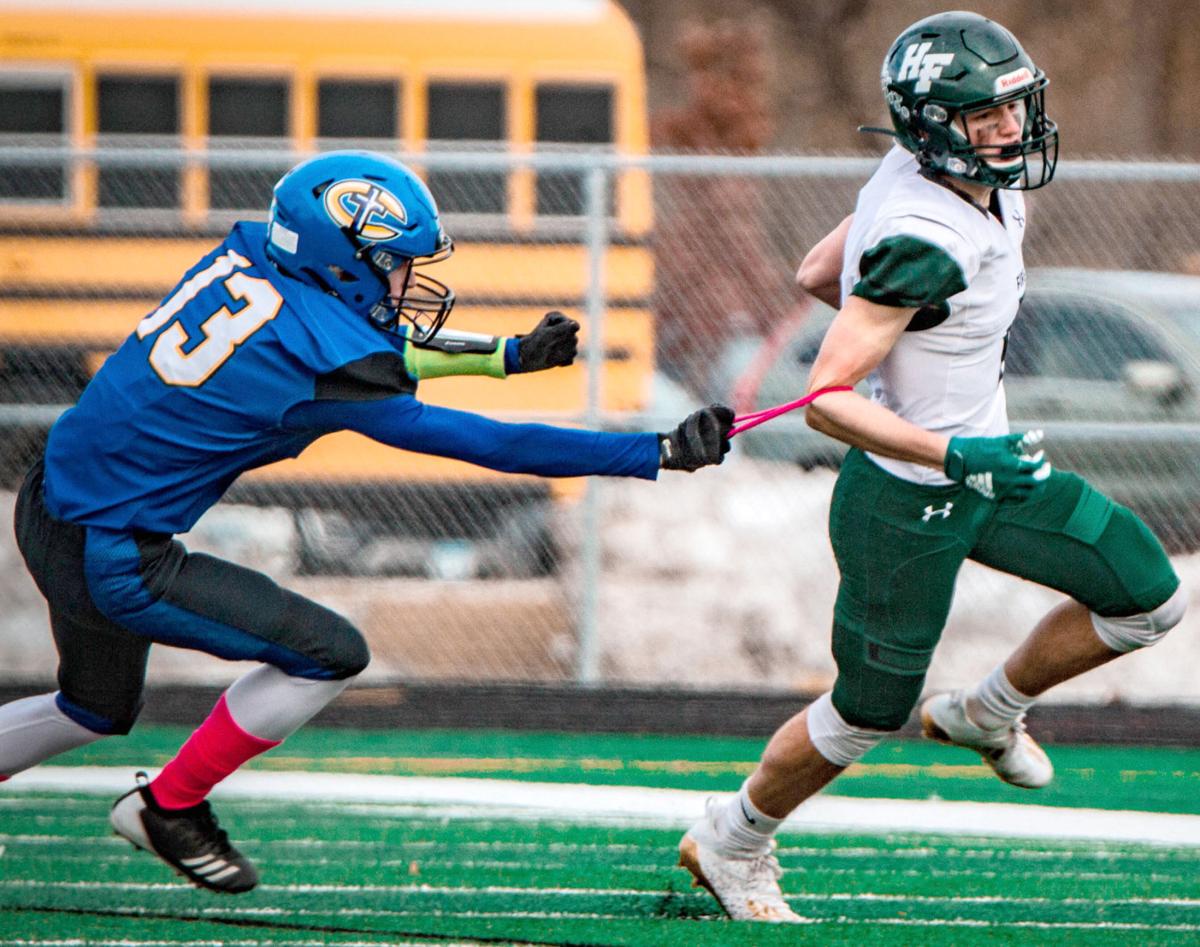 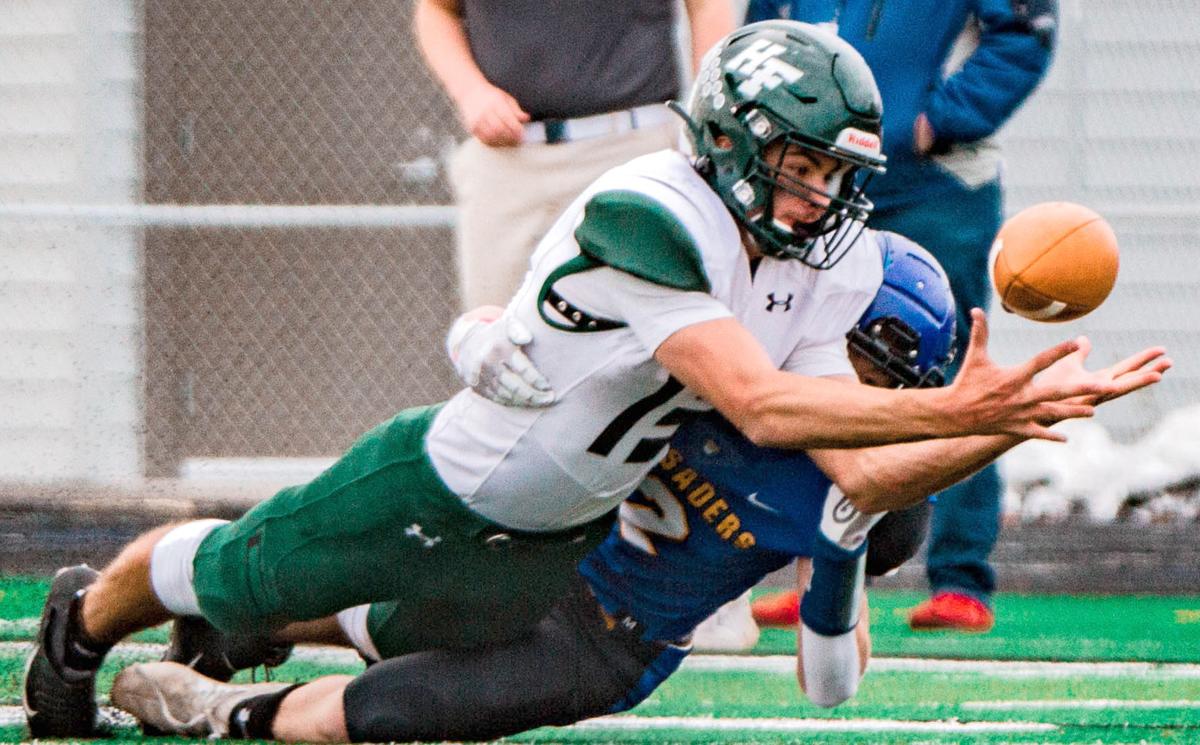 Holy Family Catholic captain Jacob Kirsch dives for an interception attempt in a 22-11 win over St. Cloud Cathedral on Oct. 31. 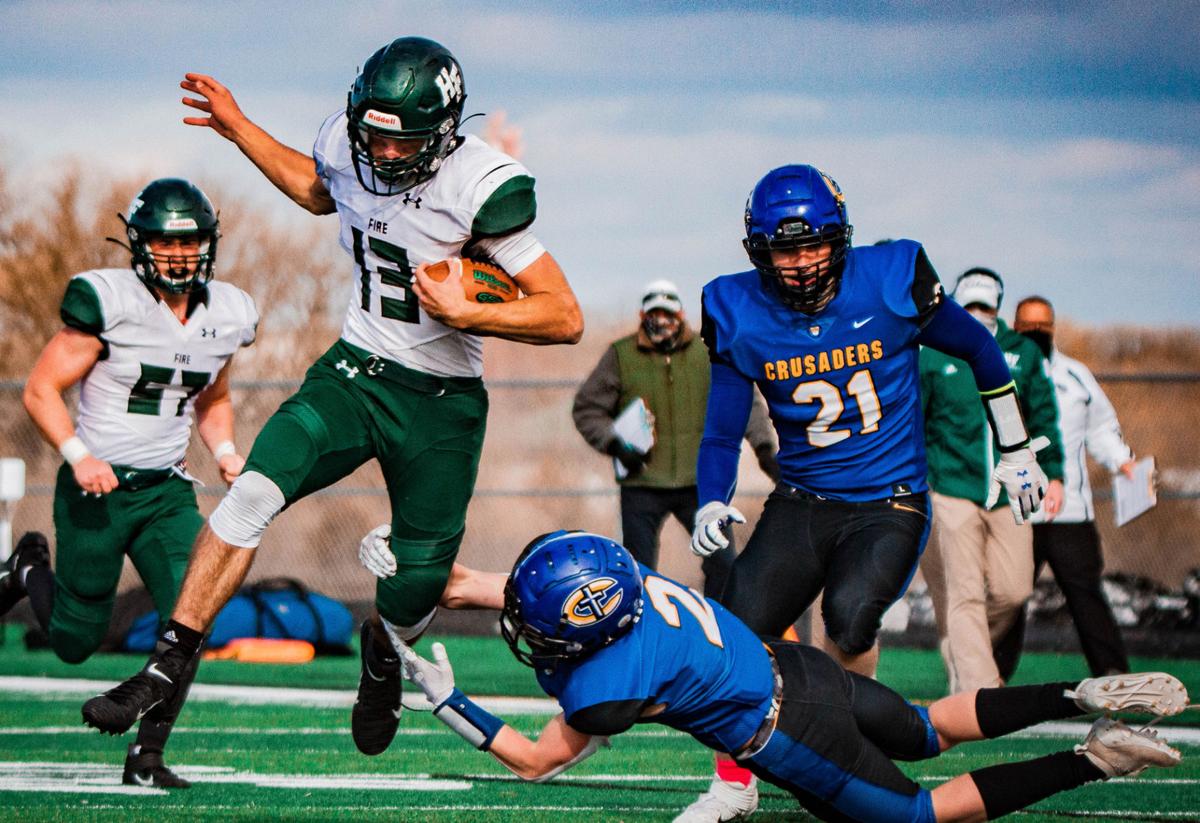 Holy Family Catholic’s sideline celebrates as quarterback Jacob Kirsch sprints toward the end zone for the go-ahead and eventual game-winning touchdown in a 22-11 win over St. Cloud Cathedral on Oct. 31.

Holy Family Catholic captain Jacob Kirsch dives for an interception attempt in a 22-11 win over St. Cloud Cathedral on Oct. 31.

Jacob Kirsch didn't have a chance to lead his team down the field for a game-winning touchdown drive as a junior in 2019.

Hurt in his first start, the Holy Family Catholic quarterback had to sit and watch as the Fire posted just one win in nine games.

Back as a senior captain this fall, a roster that suits roughly 40 players total between ninth and 12th grades, Kirsch entered week four against St. Cloud Cathedral as the team's leading rusher, leading passer as well as the punter and a cornerback.

"I learned that you have to adjust to what you have available to you. They moved a receiver to quarterback last year, so you just have to roll with the punches. I think I learned it's never over until it's over," Kirsch said.

"I knew we had it in us. We had been driving the ball all night. I knew that if everyone did their job, and they did, we could go down the field and score. There was that level of excitement, but also still some nervousness," Kirsch said of the tense final minutes.

Kirsch called his own number for seven, three and six yards before a first-down throw of nine yards stopped the clock as Tien Foudray worked a short route before going out of bounds.

Another first down came on back-to-back Kirsch rushes of nine and five yards, forcing host St. Cloud Cathedral to call a time-out with 1:16 left in regulation.

"The outside corner was working most of the night, both sides of the field, but I think we noticed their safeties had a hard time getting over on the left side," Kirsch said.

Following the lead block from lineman Tyler Pettibone, Kirsch ran untouched through the left side and into the end zone for the 15-11 lead on a Carver Kasper extra point with 70 seconds remaining.

The ensuing kick-off was fumbled, Jakob Lenzmeier making the initial stop, then worked the ball loose with the recovery to seal the win.

Kirsch put the exclamation on the win two plays later, the same play as before, the same result, this time from 25 yards out for the 22-11 final.

"I running there and I got about the 2-yard line and I almost stopped. We watch these common sense videos, about draining the clock in that situation, but by the time I was already in the end zone. I guess up two scores we were good there," Kirsch said.

Kirsch finished with a career-high 165 yards rushing on 26 attempts. He was also 7-of-10 throwing for 69 yards and two interceptions. Foudray caught six receptions for 61 yards.

Held scoreless in the first half, short field for a third-quarter drive proved to jump start the Holy Family Catholic offense. Kirsch hit Foudray for 13 yards for a first-down conversion before the duo hooked up for the final 24 yards and a touchdown.

Foudray went up between two defenders, hauling in the catch as he fell to the ground. A 2-point pass from Kirsch to Foudray, who came across the formation in motion, cut the deficit to 11-8.

St. Cloud Cathedral took the 8-0 lead on a 91-yard run up the middle from Andrew Rott. A short field goal on the final play of the first half extended the advantage to 11 points at the break.

"It felt good. It felt good to get over the hump, get our first win," Kirsch said. "I thought we played well the first game of the season, one too many mistakes, one too many missed opportunities. I thought Saturday we capitalized on some opportunities, got the win. It's a bit relieving to get that first one. I was left with a feeling of that wasn't that hard, and it wasn't. We have an opportunity to win the next couple of games."

If there's one game circled on the schedule each year for Minnetonka and Wayzata football players, it's likely Bay Bell trophy week.

The traveling trophy between two Lake Minnetonka-area high schools, the defending Class 6A champion Trojans held the Skippers to single digits for the fourth consecutive game.

Wayzata, behind two touchdowns from Anthony Richmond, won their first game of the 2020 season in a 19-3 final on Oct. 30.

Minnetonka got on the board late in the first half on a 32-yard field goal.

Wayzata added a 10-yard rushing touchdown from Richmond in the third quarter for the final 16-point difference and the Bay Bell.

Minnetonka (1-3) is at winless Edina on Nov. 6 before hosting Prior Lake in the regular season finale on Nov. 11.