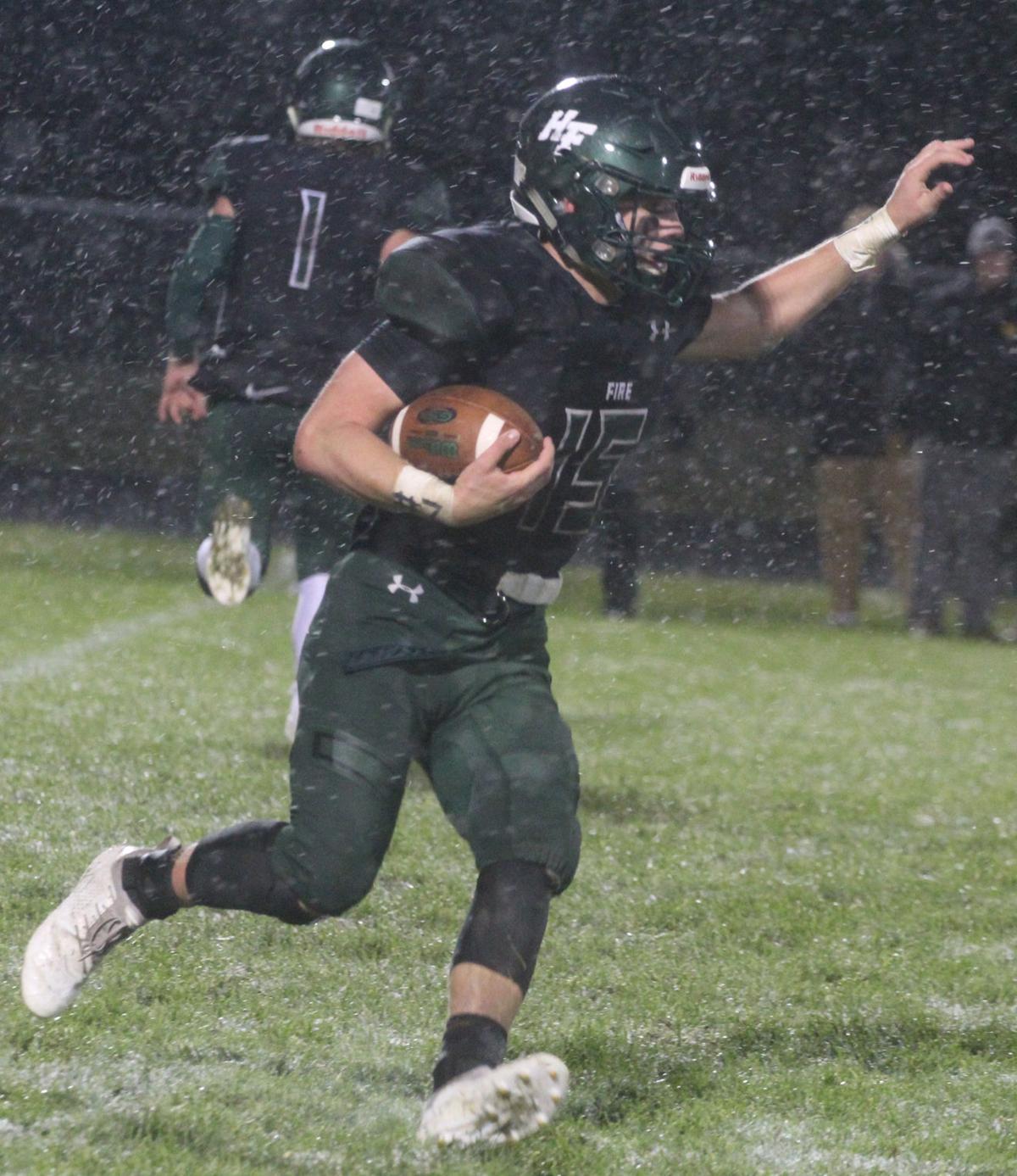 Holy Family Catholic senior Nick Hendler runs the sweep toward the near sideline as snow falls Oct. 11 in Victoria. 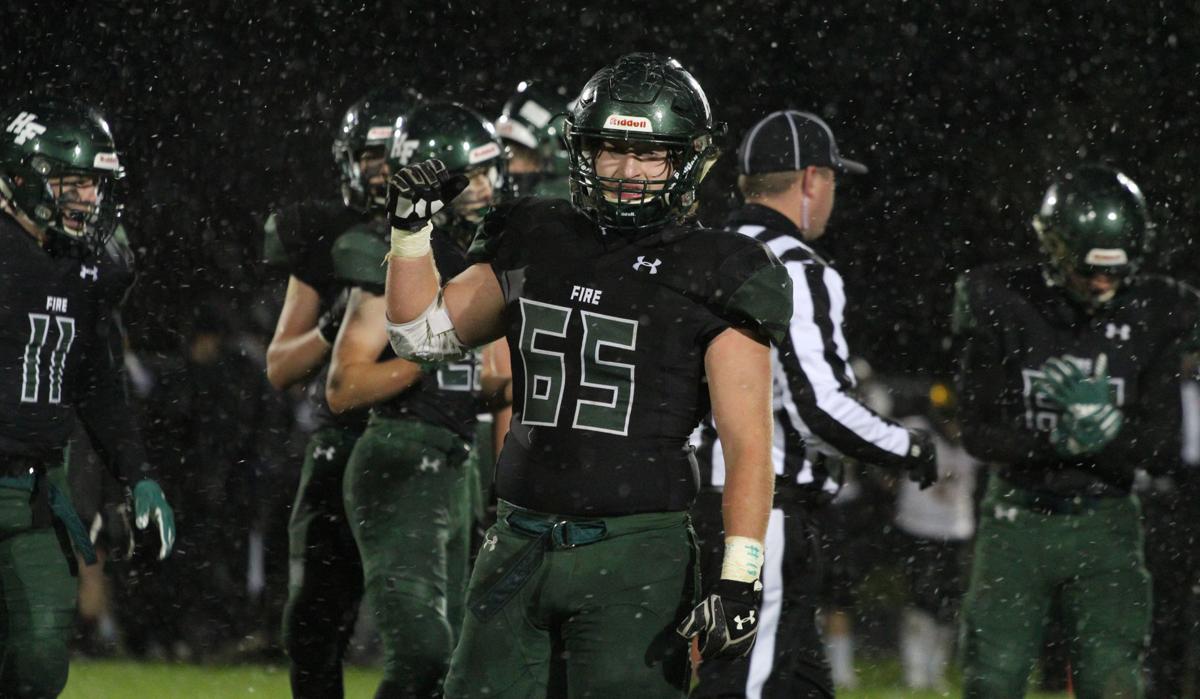 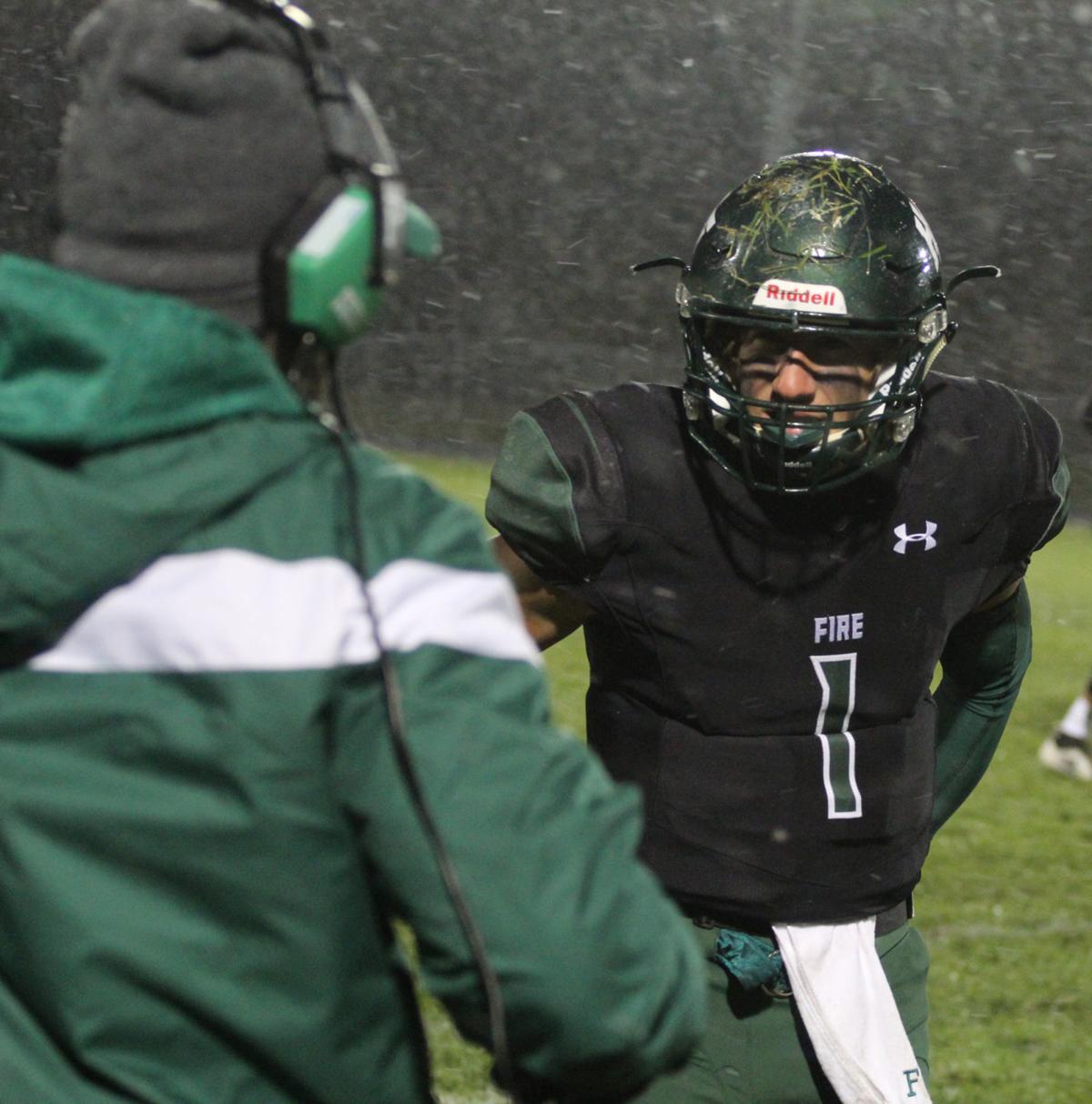 Quarterback Nate Tinucci receives the play call from Head Coach Tim Triplett in the first half for Holy Family Catholic. 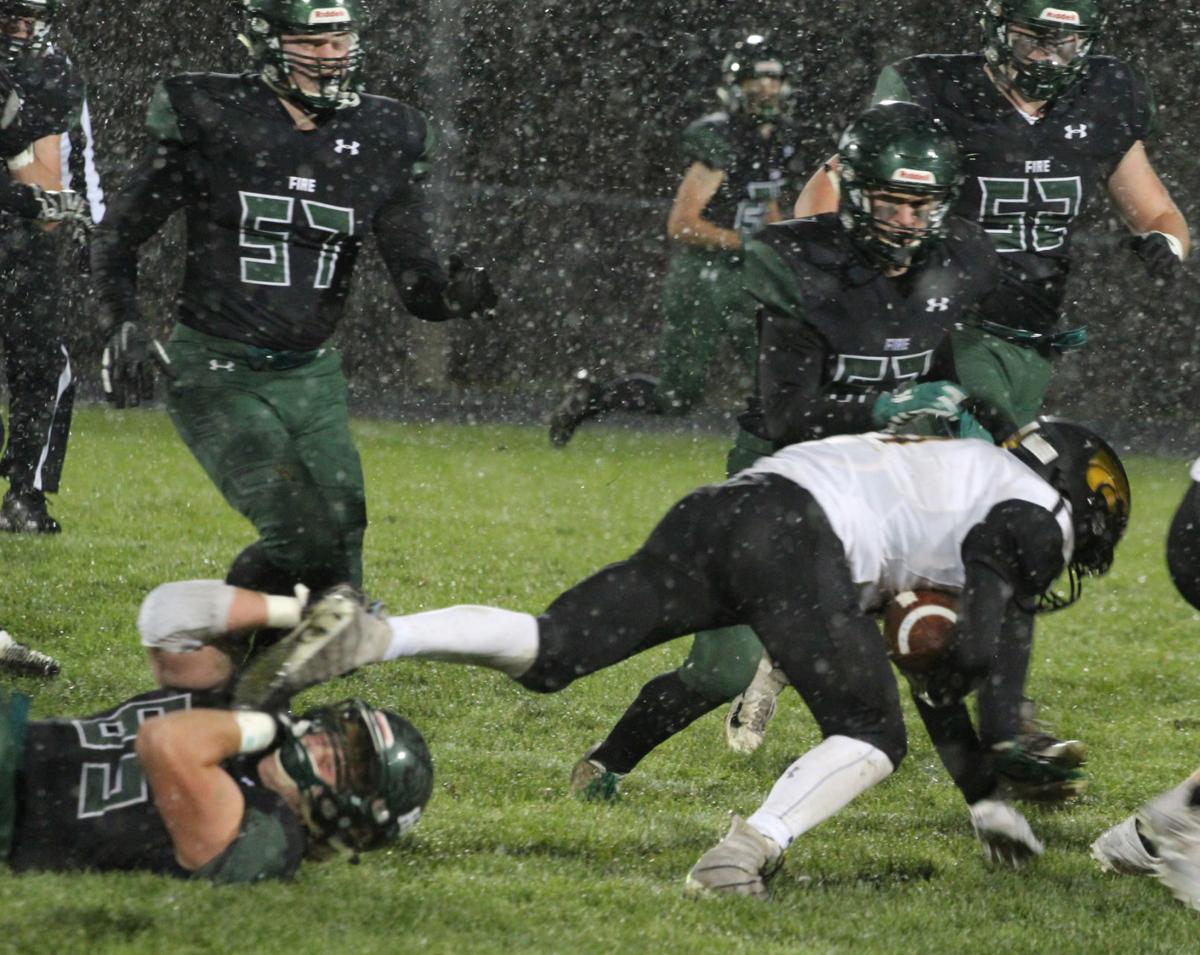 Mark Roane (65) with an ankle tackle for Holy Family Catholic on a New London-Spicer running back. 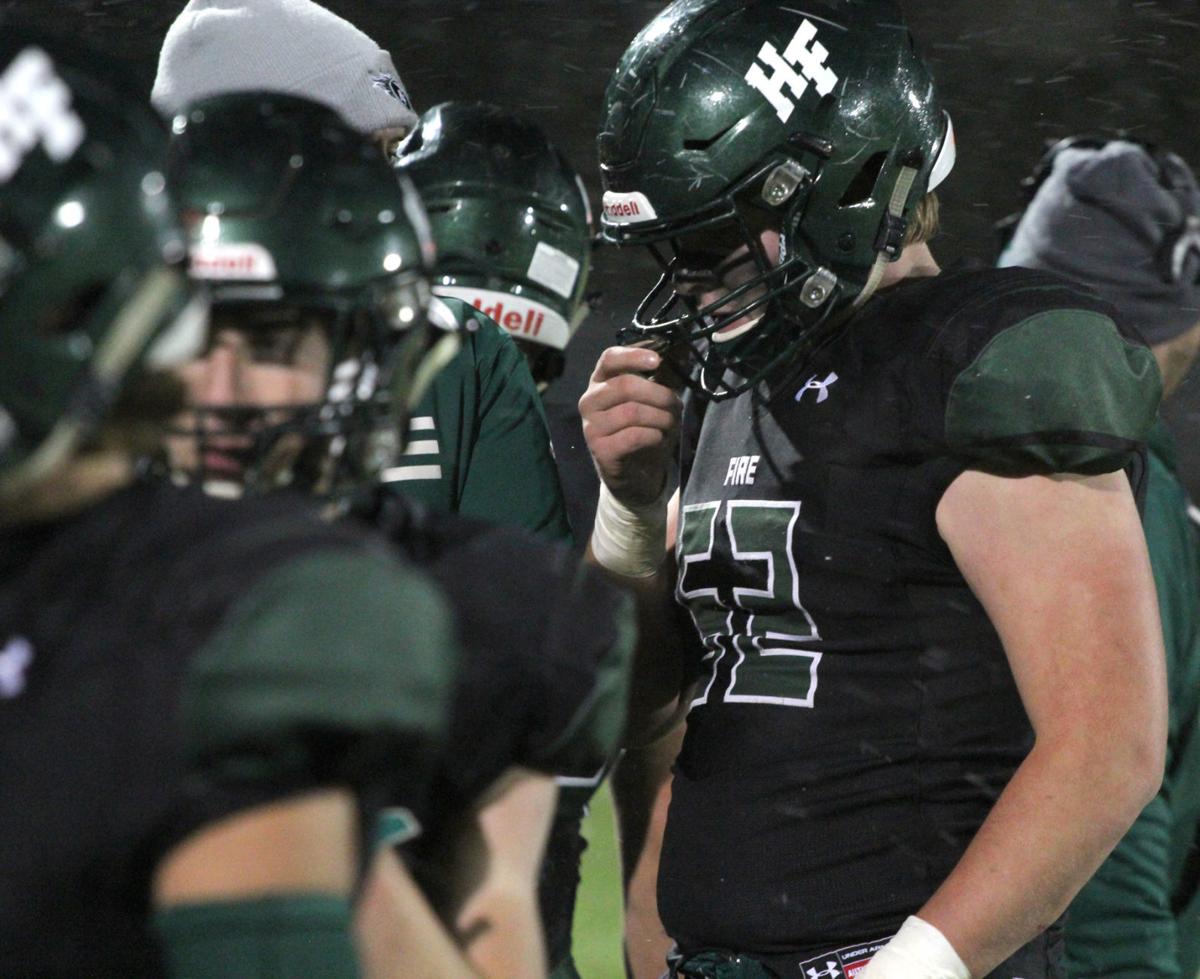 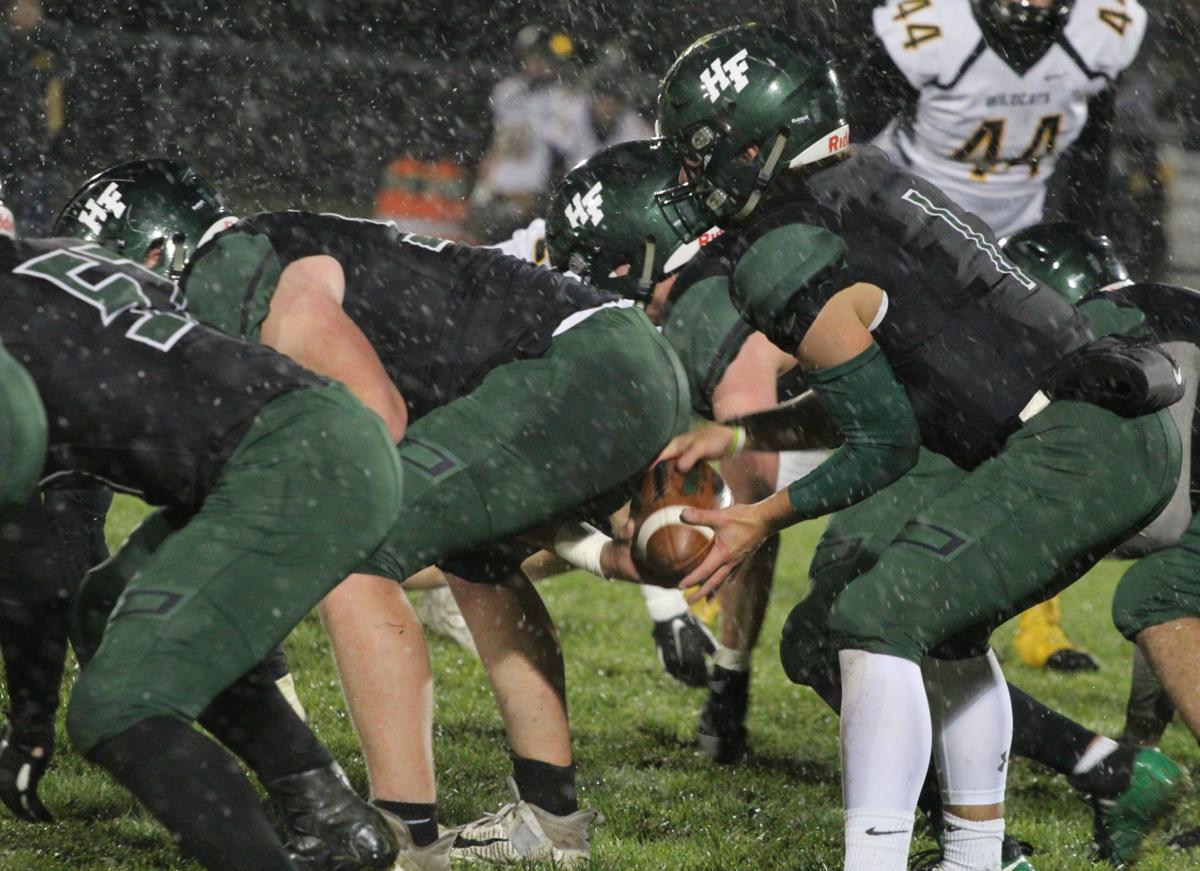 Holy Family Catholic senior Nick Hendler runs the sweep toward the near sideline as snow falls Oct. 11 in Victoria.

Quarterback Nate Tinucci receives the play call from Head Coach Tim Triplett in the first half for Holy Family Catholic.

Mark Roane (65) with an ankle tackle for Holy Family Catholic on a New London-Spicer running back.

Friday night under the lights has great meaning for Seth Thompson. It's where a wide-eyed sophomore built toughness, making him elite his final two seasons on the gridiron.

There's lessons in every stage of life. Thompson, the youngest of four siblings to go through Holy Family Catholic, just chugs along. He makes the best out of every situation. He wants to succeed no matter the outlook.

Case in point Oct. 11 against New London-Spicer, a four-win team. On paper, Holy Family Catholic, winless, had no chance. Yet for 24 minutes and beyond the Fire were right there with the Wildcats.

The Fire rallied around each other, giving 100 percent of themselves to their team and their teammates.

Even though New London-Spicer ended up winning the game, a 14-0 score, Holy Family Catholic showed something they've shown every step of the way this season.

"I know our record doesn't look good, but every game I feel like we're in. We're not getting beat up. It comes down to making plays when we need to. I wouldn't count us out. We're not done. I wouldn't be surprised if we pulled off an upset in the playoffs," Thompson said.

The Thompson Family, let's just say, are a competitive bunch.

His mother, Ellen, laid the foundation of the Hopkins girls basketball program before transitioning to the college game at the University of St. Thomas and Macalester where she was named MIAC Coach of the Year in 2010-11.

Who's tougher? Mom or dad, Scott?

"Depends on the season. Mom during basketball. Dad chimes in during basketball and football, but with track they let me do my thing. If I take a jump shot, afterward there's definitely going to be a talk about my form," he said.

Whether he's in football, basketball, or track and field -- Thompson finished ninth in state in the discus last year -- it's about bringing his best.

Thompson recently gave a commitment to the Northern Illinois program, the third recent Holy Family Catholic linemen to commit to a Division I university.

Axel Ruschemeyer is on the travel squad as a walk-on for the University of Minnesota, having played in two games. His brother, Jackson, hopes to join him come this winter after an enrollment issue in the summer.

Jackson was a valuable resource for Thompson along the recruiting trail.

"I'm pumped. It's nice to have it figured out and not stress out about it anymore. I wanted a good coaching staff and a successful program. That's what I was really looking for," Thompson said. "Recruiting wise, Jackson's been through it all, he gets it. Having him was huge. He prepared me, let me know about camps, what questions to expect, how to answer them. He was great."

A center on the Fire offensive line since week six of his sophomore year, Thompson is open to any position.

"It doesn't matter as long as I'm on the field," he said.

Snow falling through, temperatures near 30 degrees for week seven, Holy Family Catholic played a spirited game, keeping New London-Spicer off the scoreboard in the first half.

Fumble on the first two plays from scrimmage, the Fire defense stuffed the Wildcats at the point of attempt often, holding them to just seven first downs and a total of 150 yards.

Unfortunately, Holy Family Catholic's offense was never able to gain traction. And when they did, turnovers were an issue, four total.

With a small roster and no JV team, Holy Family Catholic plays a number of guys two ways. Thompson said while the week he finds his body more tired, come game day players are better able to take it in stride now.

Saturday morning, week one, was rough. I was hurting. This week I'm feeling fine," Thompson said. He credited that with his body better conditioned for contact now.

Holy Family Catholic (0-7) plays another team, Watertown-Mayer, looking for its first win since Sept. 1, 2017. The Royals have lost 24 straight games, twice to the Fire last season.

"I've been looking forward for this game for a while. Everyone wants that first win," Thompson said.