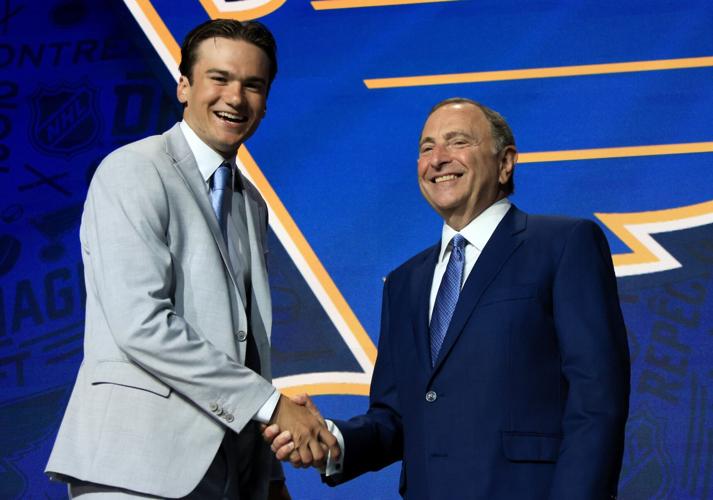 Jimmy Snuggerud poses with NHL commissioner Gary Bettman after being selected 23rd overall by the St. Louis Blues in the 2022 NHL Draft July 7. 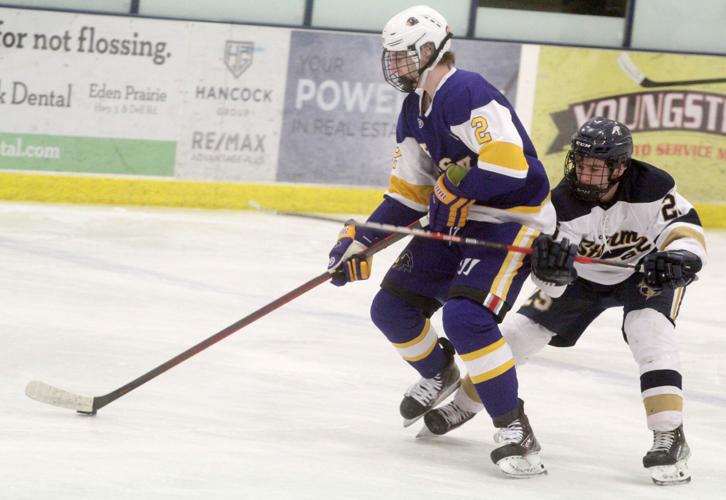 Chaska defenseman Sam Rinzel collected the puck in the neutral zone in a 4-2 win over Chanhassen in January. Rinzel was selected 25th overall by the Chicago Blackhawks July 7 in the 2022 NHL Draft.

Jimmy Snuggerud poses with NHL commissioner Gary Bettman after being selected 23rd overall by the St. Louis Blues in the 2022 NHL Draft July 7.

Chaska defenseman Sam Rinzel collected the puck in the neutral zone in a 4-2 win over Chanhassen in January. Rinzel was selected 25th overall by the Chicago Blackhawks July 7 in the 2022 NHL Draft.

Chaska hockey was well represented in the 2022 NHL Draft on Thursday, July 7, as former prep players Jimmy Snuggerud and Sam Rinzel were selected in the first round.

Snuggerud was drafted 23rd overall by the St. Louis Blues. A 6’2” forward, Snuggerud played in 51 games for the U.S. National U18 team for whom he posted 20 goals and 56 points. Heading into the draft, he was no. 11 in the NHL Central Scouting’s final ranking of North American skaters.

“It’s super surreal, obviously super fun to hear my name called,” Snuggerud said in an interview with the St. Louis Blues media. “Just to watch 22 guys do it before me… it’s super surreal and cool in the moment.”

St. Louis has been a thorn in the side of the Minnesota Wild recently. Not only did the Blues eliminate the Wild earlier this year in the NHL playoffs, they added insult to injury by picking the Minnesota native before the Wild got the chance with the 24th pick. (Minnesota also had the 19th pick and selected Liam Ohgren from Sweden).

Snuggerud, who played for Chaska High School and the U.S. National Development Team, comes from a long hockey lineage. His father, Dave, and grandfather, James Westby, both played hockey for the Minnesota Gophers and for USA Hockey. He will follow in their footsteps and continue his hockey career at Minnesota this coming season.

Just two picks later, the Chicago Blackhawks selected Rinzel, a 6’3” defenseman who played for Chaska High School and the Waterloo Black Hawks of the United States Hockey League in the 2021-22 season.

“I couldn’t believe it. I had a feeling that was the team that had the most interest in me but I never knew. For them to pull the trigger on me, I was very fortunate,” Rinzel said in a press conference after being selected.

Rinzel was projected to be selected either at the end of the first round or near the beginning of the second round. When asked about what the uncertainty of where he might be selected was like, Rinzel said he wasn’t too phased.

“You’re just going in hoping for the best, but at the end of the day, it’s not fully where you’re picked, it’s obviously what you do after,” Rinzel said. “I’ve still got a long road ahead, for sure.”

As a junior at Chaska, Rinzel finished with 38 points (9 goals, 29 assists). He also recorded 10 points in 21 games with Waterloo. Rinzel is also committed to play for Minnesota.