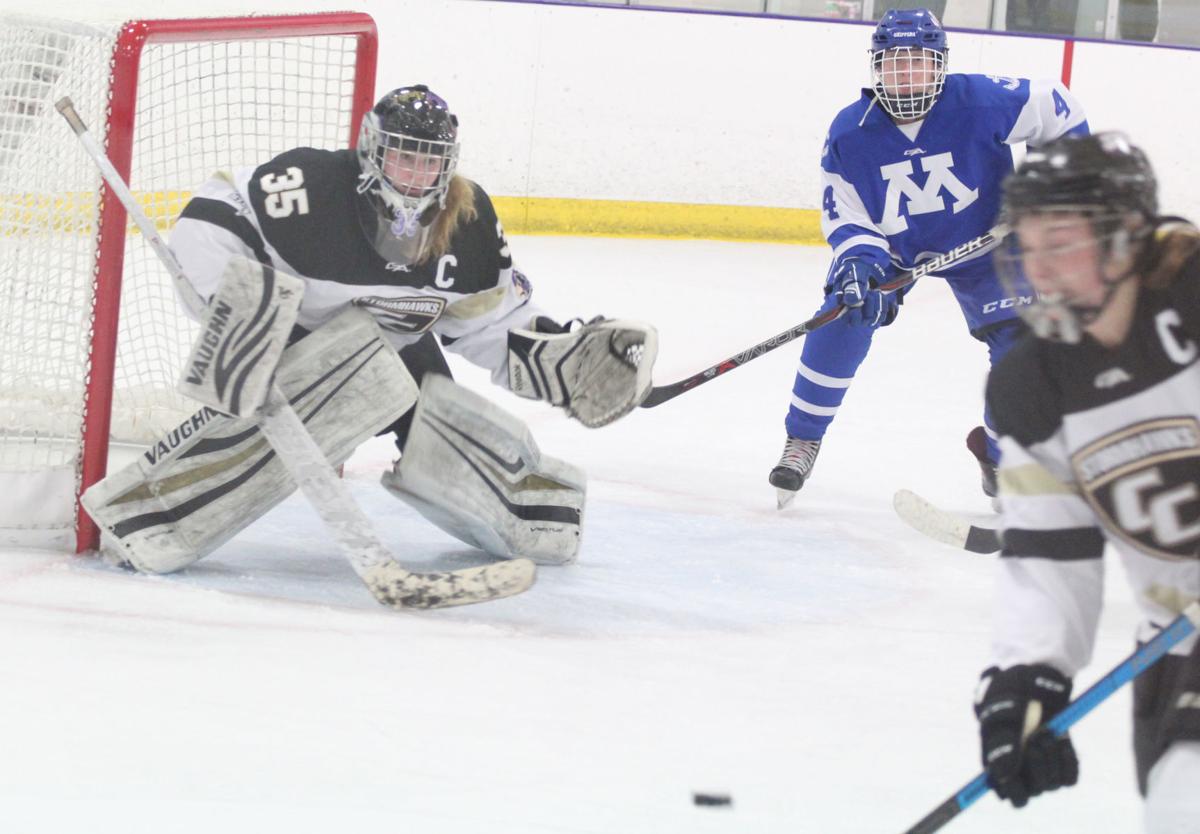 A back door pass to Minnetonka’s Kylie Melz is tipped away by Chaska/Chanhassen goaltender Olivia Rinzel in a 1-1 game in the second period Dec. 12. Rinzel made a career-high 50 saves in the contest. 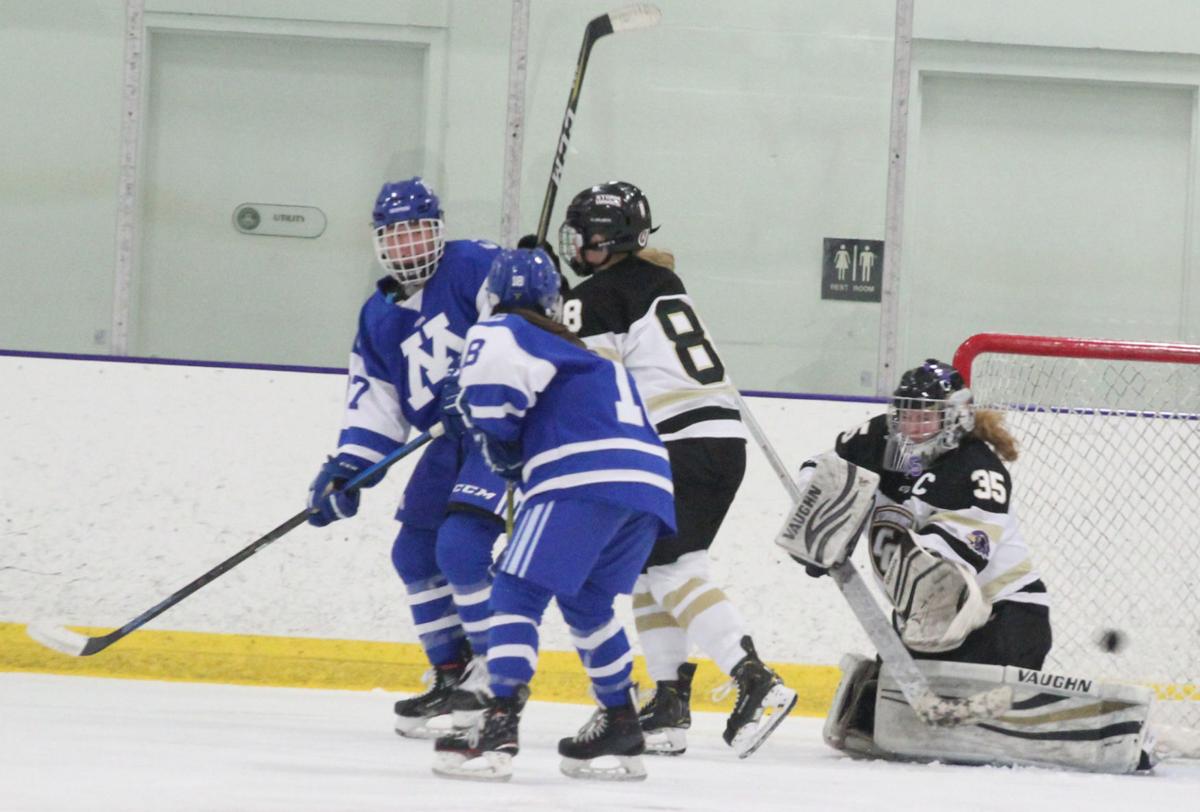 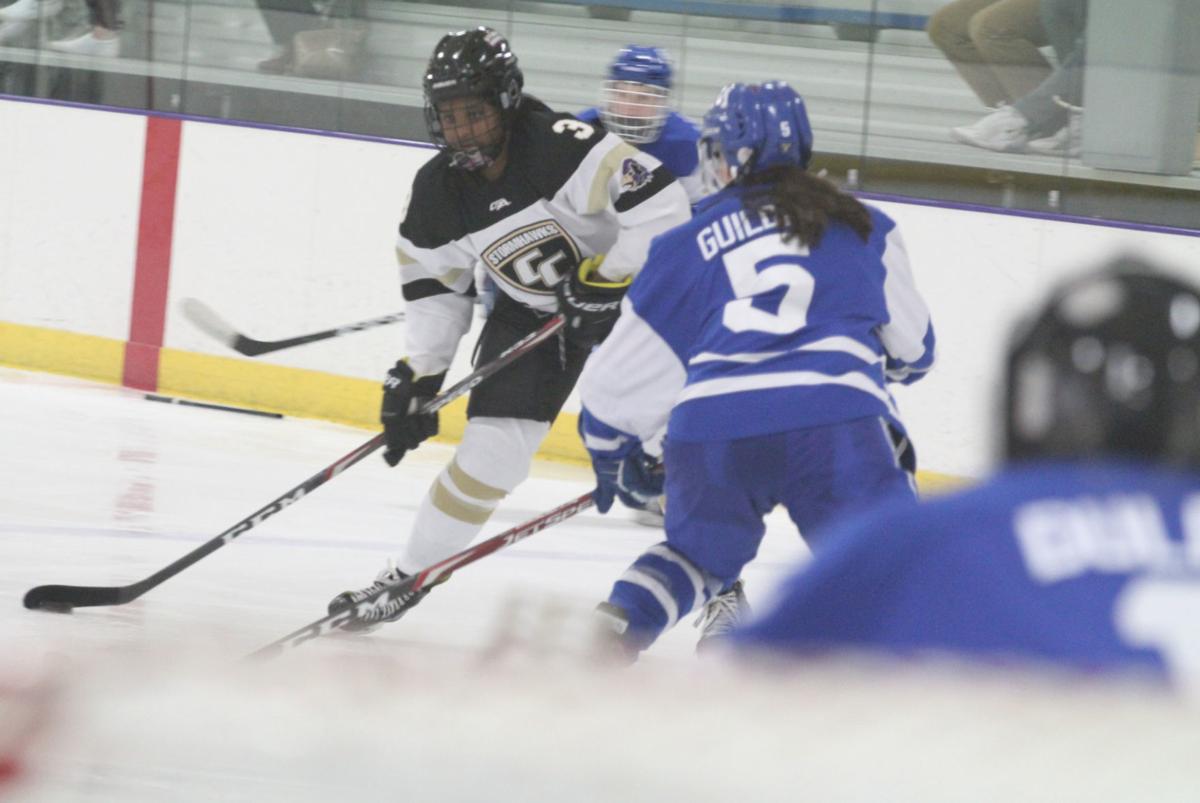 Chaska/Chanhassen’s Katelyn Roberts wrists a shot toward Minnetonka goaltender Brynn Dulac. Skipper defender Rory Guilday (5) gets a stick on it to deflect it wide. 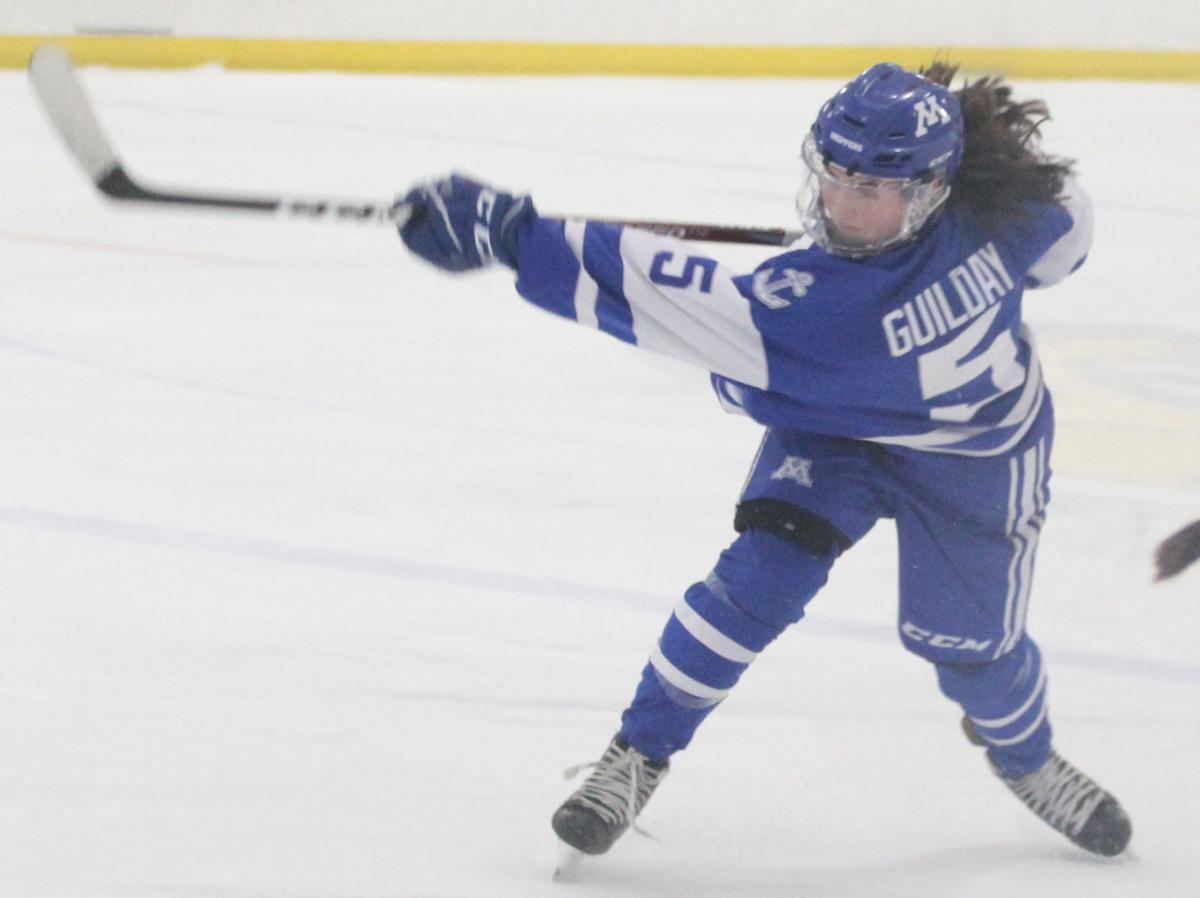 Minnetonka defenseman Rory Guilday and teammate Maggie Nicholson will play for Team USA at the U18 World Championships in Slovakia after Christmas.

A back door pass to Minnetonka’s Kylie Melz is tipped away by Chaska/Chanhassen goaltender Olivia Rinzel in a 1-1 game in the second period Dec. 12. Rinzel made a career-high 50 saves in the contest.

Chaska/Chanhassen’s Katelyn Roberts wrists a shot toward Minnetonka goaltender Brynn Dulac. Skipper defender Rory Guilday (5) gets a stick on it to deflect it wide.

Minnetonka defenseman Rory Guilday and teammate Maggie Nicholson will play for Team USA at the U18 World Championships in Slovakia after Christmas.

Tracy Cassano spent just two seasons behind the bench for Chaska/Chanhassen, including a 20-win section runner-up and Missota Conference championship campaign in 2011-12.

Thursday was a sort of trip down memory lane. It was her first game back at Chaska Community Center after leading Burnsville for six seasons.

Another former Storm Hawks head coach, Jeff Wahl, is back on her staff, this time with the Minnetonka Skippers. Cassano was greeted at the ticket table by a familiar face as well.

"It's fun coming back. Those kids I coached were awesome and made my time so much fun. To see Megan O'Brian's mom taking tickets as I walked in, it brought me back to the positive experience I had," Cassano said.

Cassano takes over a Minnetonka program that placed third at state last season despite a sub-.500 regular season record. A majority of that roster returns, as talented of a blueline as any team team in the state.

"This is a program with a tradition of excellence and it's a fun group of kids that are coachable, that always show up. They're hockey players. They really push and strive to be the best in state. We really like where we're at," Cassano said.

The blueline includes the pairing of University of Minnesota commit senior Maggie Nicholson and Cornell University commit junior Rory Guilday. Both players are headed to Slovakia with Team USA for the 2020 IIHF U18 Women's World Championships Dec. 26-Jan. 2.

Having the luxury of having a quality defensive group that includes junior Hanna Baskin and seniors Lisa LaRoche and Anna Sorenson affords Cassano of matching up Nicholson and Guilday often.

"We're senior-heavy. We're deep. We just have so many talented kids throughout our roster. You talk about our defensemen and we could pair any of them together and we feel confident in their abilities. It is really fun to have Maggie and Rory together. They communicate so well. They're so close on and off the ice. They read each other, know where another will be. You don't see that type of connection often, on the girls or boys side," Cassano said.

Minnetonka, ranked No. 3 in state, is 7-2 overall, having lost to No. 1 Andover and No. 2 Edina. Their latest two wins included an overtime decision over North Wright County Dec. 10 and a hard-fought 3-1 decision at Chaska/Chanhassen Dec. 12.

In each, the Skippers needed third-period goals to earn the victory.

"We talk about growing and learning from every experience. It's good to go through different things in the regular season because it prepares you for whatever is thrown you in the playoffs," Cassano said.

RELATING TO THE PLAYERS

A year ago this time, Jackie Pieper could be found on the ice at Ridder Arena, a member of the University of Minnesota women's hockey team. Fast forward a couple of months and the Edina graduate, who started her collegiate career at Merrimack, was hired to lead Chaska/Chanhassen.

Ten games in, thus far the transition has been a natural one from player to coach.

"It's definitely different, but these girls and this community has welcomed me and have been so helpful, that I couldn't have done it without them. It's really been a blessing and I couldn't have asked for anything better," Pieper said.

Talking to the players, having a younger coach gives them someone who can relate. Despite an impressive showing against Minnetonka, a 1-1 game through two periods, a 3-1 final with an empty netter, there was a sense of disappointment in the locker room.

That's where Pieper comes in, fully understanding what needs to be said at the moment. She's been in their skates.

"The biggest thing for them to know is they are good enough to beat those girls. We were going into the third period a 1-1 game, a tie game. With a smaller roster, them playing more, they're going to have to want it just a bit more in the third period. With Eden Prairie and now Tonka, we're right there," Pieper said.

Chaska/Chanhassen, despite being outshot 53-14, had its chances with the Skippers, a team the program beat in 2016 and added a draw in 2017.

Bethany Velasco's power-play goal, a rebound off a shot on net from Nina Langley, who returned to the line-up after missing three games, evened the score at one in the second period.

The Storm Hawks had an early third-period power play, managing a couple good looks from the slot over the final 17 minutes. A 2-on-1 opportunity in the closing 70 seconds could have tied the game, forcing overtime.

In the end, Nicholson's left-circle blast through traffic with 10:23 to play was the difference. Emily Bayless added her third goal in two games into the empty net for the final score.

"Chaska/Chan was a hard-working team. We felt like we were dominating the game and yet the score didn't reflect that. I think the big thing was we didn't get frustrated. We stayed positive and we kept playing our game, got pucks on net. We kept saying it doesn't have to be a pretty goal," Cassano said.

Those big-game experiences will come in handy at Eden Prairie on Tuesday, Dec. 17, a 7 p.m. match-up.

Olivia Rinzel, a former USA Hockey Girls Development participant, has been a rock star in goal for Chaska/Chanhassen this season.

In her last five outings, the senior has allowed eight goals on 149 shots. That included a 43-save performance in a 3-2 loss at fifth-ranked Eden Prairie and 50 stops against Minnetonka.

Simply put, Rinzel gave her team a chance to win both games.

"I just have to play my hardest, give my team the best chance to win. That's all I think about. Not how many shots I'm facing or something like that. ... I feel good about how I played, but I'm disappointed because I felt like we could have won both games. We were right there with chances to win," Rinzel said.

After splitting time as a junior, Rinzel has taken over the top spot in the rotation in net. She appreciates being pushed by teammate Clara Nelson, happy to see her succeed as well.

When her name is called to play, Rinzel is ready.

"The relationship I have with my goaltender partner is amazing. I support her, she supports me, and I think that's a really good thing. You're out there playing for your team first and foremost," she said.

Chaska/Chanhassen has a smaller roster this season with only 14 skaters on varsity. Defenseman Abby Nelson is the only other senior. Four players are up on the top team for the first time.

So, growth is being seen each time out. Most notably in the defensive zone where the Storm Hawks have tightened up play, not allowing cheap goals past Rinzel and Nelson.

"We've really emphasized the D zone, moving people away from the net, picking up sticks. I think with a new coaching staff, we need to all come together and work as a team. We're young and we're making steps. I feel like we'll be a different team by the playoffs," Rinzel added.

Chaska/Chanhassen plays one final game before Christmas in a home contest against Mound-Westonka on Friday, Dec. 20.