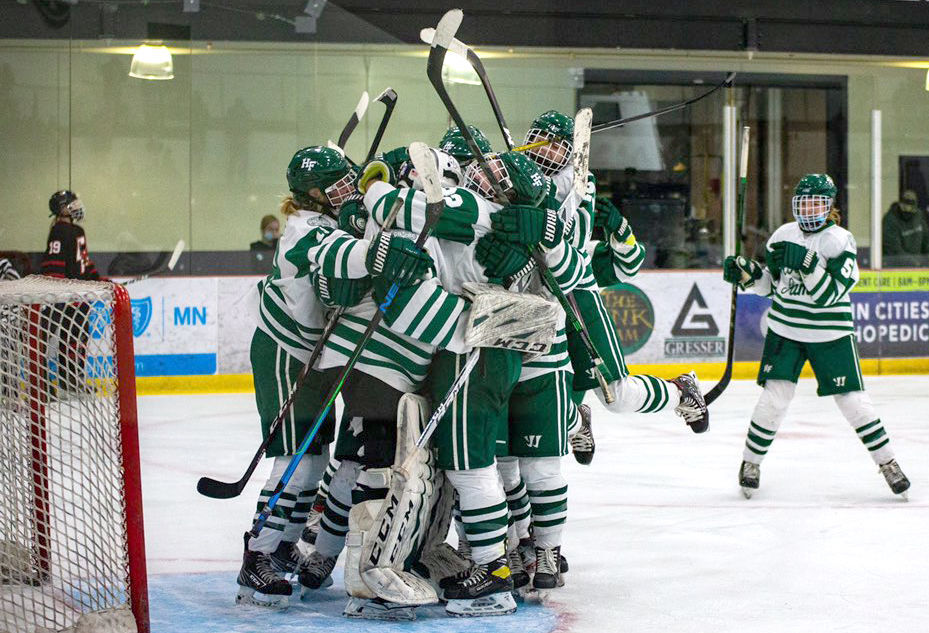 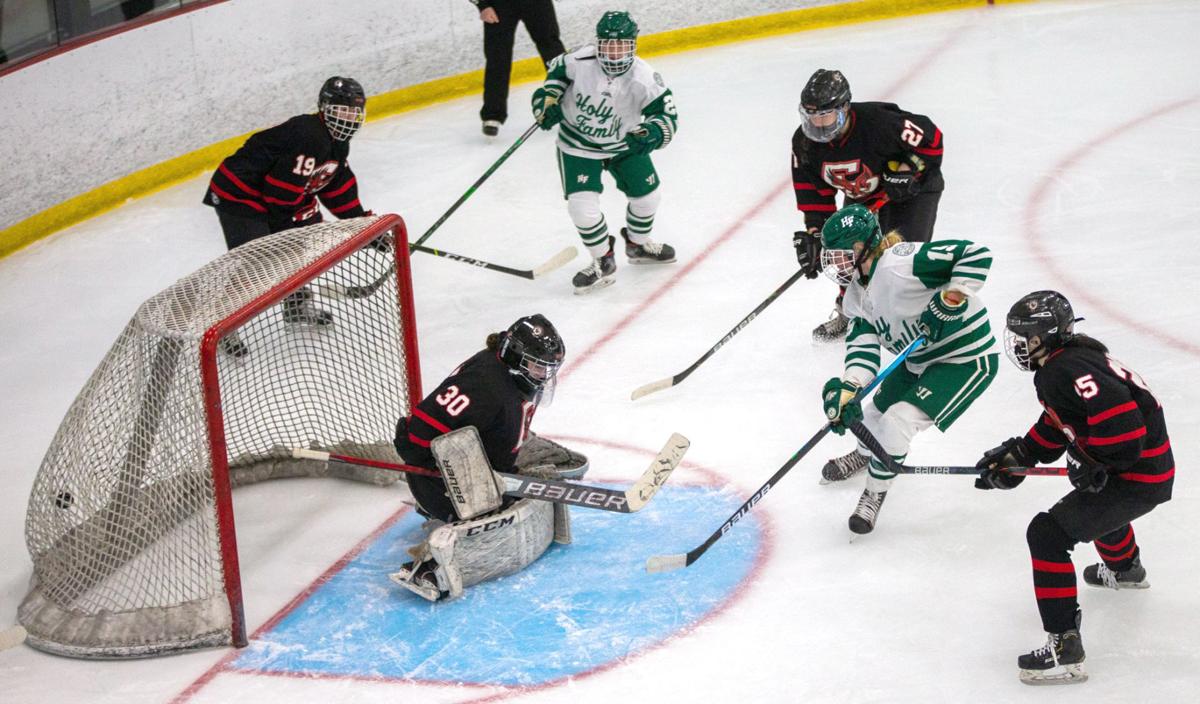 Holy Family Catholic's Grayson Limke buries a first-period shot into the net for the 1-0 lead in the Section 2AA semifinal on March 18.

Holy Family Catholic's Grayson Limke buries a first-period shot into the net for the 1-0 lead in the Section 2AA semifinal on March 18.

The eventual game winner, though, while at even strength, five skaters on the ice for each team, certainly was special, too.

Holy Family Catholic, with its 3-2 win over Eden Prairie, will make its first section championship appearance in program history on Saturday, March 20, at 4 p.m. at Pagel Ice Arena in Minnetonka.

The Skippers, the top seed and two-time defending Section 2AA champions, won 4-2 over Bloomington Jefferson in the other semifinal.

Sophomore Olivia Paidosh's goal at the 12:50 mark of the second period was the game-winner for the Fire.

Sedona Blair made eight saves in the third period to preserve the one-goal victory for Holy Family Catholic, the 11th in a row for the Fire.

Holy Family Catholic, which beat Eden Prairie for the first time in program history on March 5, by a 3-1 score, grabbed the early lead again on a tally from Grayson Limke.

Eden Prairie senior Grace Kuipers, team leader with 18 goals, like she did in the first meeting, tied the game in the second period, and eventually gave the Eagles the 2-1 lead.

Kuipers scored on the power play at the 1:43 mark before adding a short-handed tally at 6:06 of the period.

Holy Family Catholic tied the game at two on a power-play goal from MacKenzie Moss from Paidosh and Kayla Woytcke.

Minnetonka is one step from a third consecutive Section 2AA championship and state tournament appearance after beating Bloomington Jefferson 4-2 in the semifinals on March 18 at Pagel Arena.

Senior Sammy Schmidt was one of four goal scorers for the Skippers, which saw Bloomington Jefferson score twice late in regulation.

Minnetonka led 2-0 after one period and 3-0 into the second intermission on tallies from Grace Sadura on the power play, Lauren Goldsworthy and Olivia LaRoche.

Sadura and LaRoche each registered two points as did Alex Alvarez with two assists. Brynn Dulac stopped 11 of 13 shots to improve to 13-3-3 on the season.

Game time for the championship is 4 p.m. on Saturday, March 20.

Top seed Mound-Westonka/Southwest Christian advanced to the Section 2A championship with a 6-1 win over Hutchinson on March 18.

The White Hawks will face No. 3 seed New Ulm in the championship at 6:30 p.m. on Saturday, March 20, at Thaler Ice Arena. The Eagles upset Delano/Rockford 3-2 in double overtime.

Sydney Leonard netted a hat trick for MW/SWC with Camryn Hargreaves, Ellie Schmid and Grace Peterson each scoring a goal.

Callie Nelson made seven saves on eight shots for the White Hawks.