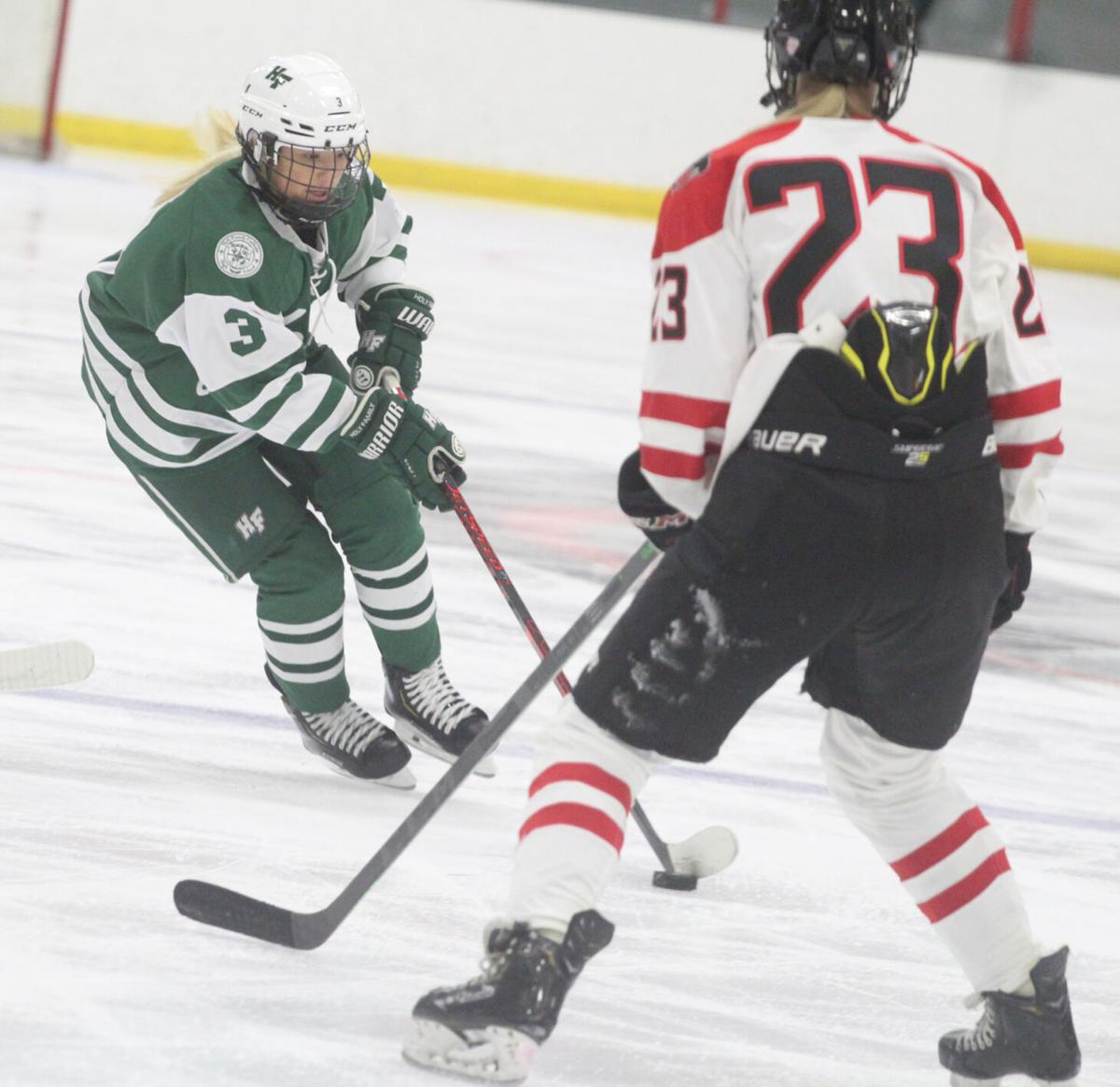 Holy Family Catholic senior MacKenzie Moss carries the puck into the offensive zone during the second period of a 4-1 win over Shakopee Nov. 18. 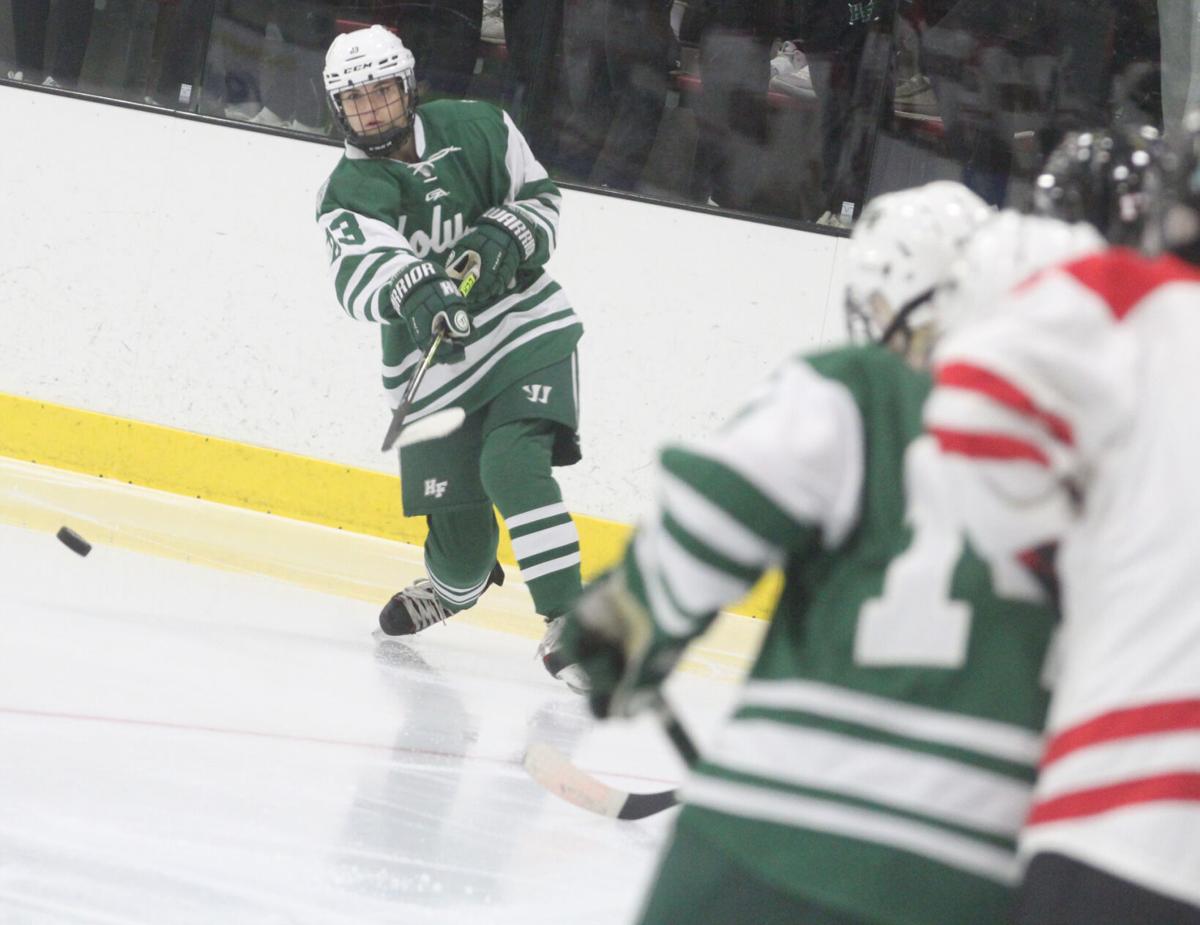 Holy Family Catholic defenseman Justina Valentini blisters a shot toward the net with teammate Taylor Koeppl providing a screen in a Nov. 18 meeting with Shakopee.

Holy Family Catholic senior MacKenzie Moss carries the puck into the offensive zone during the second period of a 4-1 win over Shakopee Nov. 18.

Holy Family Catholic defenseman Justina Valentini blisters a shot toward the net with teammate Taylor Koeppl providing a screen in a Nov. 18 meeting with Shakopee.

Traveling across the state of Minnesota, Holy Family Catholic has started the 2021-22 girls hockey season with a 2-0-1 record after defeating Shakopee 4-1 and tying Maple Grove 2-2.

The Fire opened with a 3-2 overtime win at Class A No. 1 Warroad.

Maddie Kaiser scored her second and third goals of the season as the Fire outshot the Sabers 41-16 on Nov. 18.

Maddie Morgan's unassisted tally was the only shot to beat Shakopee goaltender Alex Boots in the first period; a frame that saw the Fire register 18 shots to one from the Sabers.

Shae Messner also found the net for the Fire in the third period with Morgan collecting her third point and second assist.

Kaiser and Ella Knewtson found the net in the Holy Family Catholic draw with the Crimson on Saturday, Nov. 20. Neither team was able to find the winner over the final 25 minutes. The Fire had a shot advantage 15-7 during that stretch.

Katelyn Roberts added her third tally of the season versus Wayzata.

Goaltender Maddie Margraf combined for 73 saves in the two losses.

A 4-3 overtime win over Stillwater and a 6-1 victory over Brainerd/Little Falls improved third-ranked Minnetonka to 3-1 on the season.

Grace Sadura's winner from Ava Lindsay came at 1:41 of overtime against the Ponies. The Skippers trailed 2-0 before claiming a 3-2 lead on a goal from Sadura and special teams tallies -- one on the power play, another short-handed -- from Josie Hemp.

Stillwater tied the game at three with 62 seconds left on the clock on a 6-on-4 opportunity.

Sadura had a hat trick versus Brainerd/Little Falls, now with seven goals in four games. Hemp had two tallies in the win as well. Senior Alex Alvarez registered her first goal of the season late in the second period.

Sophia Johnson made 11 saves on 12 shots in her third victory of the season.

Greer Hardacre's third-period goal proved to be the game-winner as Mound-Westonka/Southwest Christian defeated Alexandria 4-2 on Nov. 19.

Traveling to Alexandria, MW/SW needed a third-period rally, down 2-1. Gretta Pioske, Hardacre and Camryn Hargreaves scored over the final 5:20 for the final 4-2 difference. Sydney Leonard's unassisted goal was the only tally in the game's first two periods.

Gisella Harder, Tori Lacomy and Ellie Schmid, all of Southwest Christian, each had assists in the win over South St. Paul. The White Hawks scored four times in the third period after the two teams were tied at two.