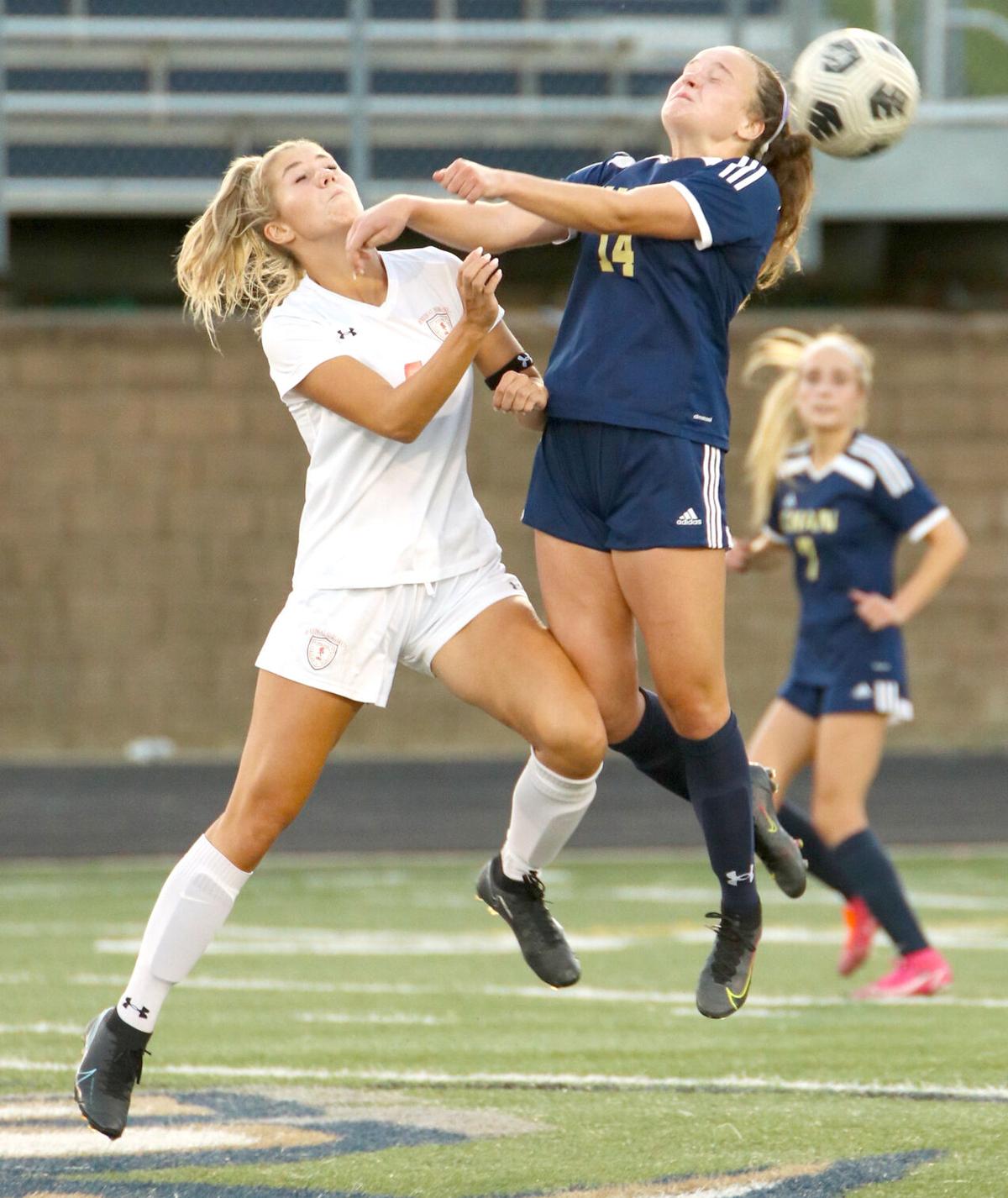 Chanhassen's Kaia Burroughs rises up for a header with a Benilde-St. Margaret player. The Storm were tied at two with the top-ranked Red Knights in the second half in an eventual 3-2 loss. 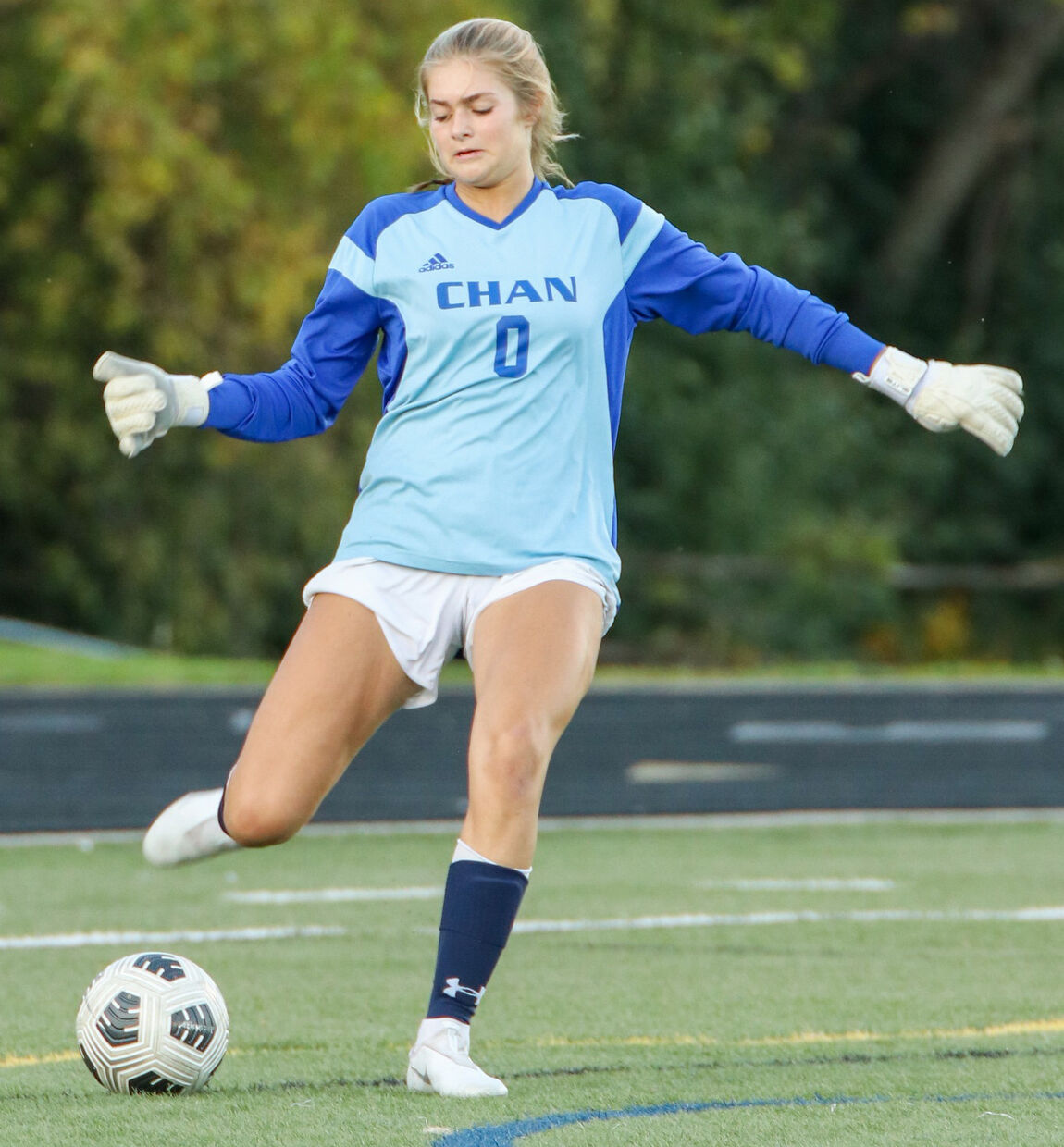 Jessie Maus made nine saves for Chanhassen in a 3-2 loss versus unbeaten and top-ranked Benilde-St. Margaret on Oct. 5.

Chanhassen's Kaia Burroughs rises up for a header with a Benilde-St. Margaret player. The Storm were tied at two with the top-ranked Red Knights in the second half in an eventual 3-2 loss.

Jessie Maus made nine saves for Chanhassen in a 3-2 loss versus unbeaten and top-ranked Benilde-St. Margaret on Oct. 5.

Benilde-St. Margaret entered play Tuesday with a perfect 12-0-0 record, a total of three goals allowed, 10 shutouts posted. Chanhassen gave them a run for their money.

Grace Fogarty's penalty kick goal tied the match at 2, a go-ahead goal from Ava Wagener just minutes later putting the Red Knights on top for good in a 3-2 final.

Jessie Maus made nine saves for the Storm with Olivia Olson turning away eight Chanhassen attempts.

Kennedy Beld assisted on an Emma Beverly tally in the first half for Chanhassen.

Wagener finished with two goals for Benilde-St. Margaret, which clinched at least a share of the Metro West Conference title with the win. They draw Waconia, which has one loss -- to Chanhassen -- in the league finale.

Tied at one in the final minute, overtime, right? Nope! Gabby Legg's seventh tally of the season, with eight seconds on the clock, was the difference in Holy Family Catholic's 2-1 road win at Watertown-Mayer Oct. 5.

The Fire, 6-1-0 in the Wright County Conference, were second in the league standings behind Southwest Christian.

Maeve Kelly opened the scoring for Holy Family Catholic in the 31st minute. The Class A seventh-ranked Royals knotted the match at one on a score from Ava Danielson in the second half.

Needing a win to clinch the Wright County Conference title in its first season in the league, Southwest Christian scored early, hanging on for a 3-0 road win at Rockford/Howard Lake-Waverly-Winsted on Oct. 5.

The Stars, with 10 shutouts this season, finished the league schedule with a 6-0-1 mark.

Overall, top-ranked Southwest Christian is 13-1-1 into the regular season finale at St. Cloud Cathedral at 4:30 p.m. on Thursday, Oct. 7.

Top-ranked Edina improved to 10-0 in the Lake Conference and 14-0 overall, a 3-0 decision over host Minnetonka on Oct. 5.

Maddie Dahlien, Wesley MacMiller and Grace Pohlidal each scored for the Hornets with Izzy Engle finishing with two assists.

Minnetonka, 5-5 in the Lake Conference, had five shots on goal.

Already with one win at Bloomington Stadium this season, Chaska entered Tuesday with a goal of a season sweep for the second consecutive season. Bloomington Kennedy had other plans.

The Eagles scored three times in the first half, winning the Oct. 5 contest by a 4-0 score.