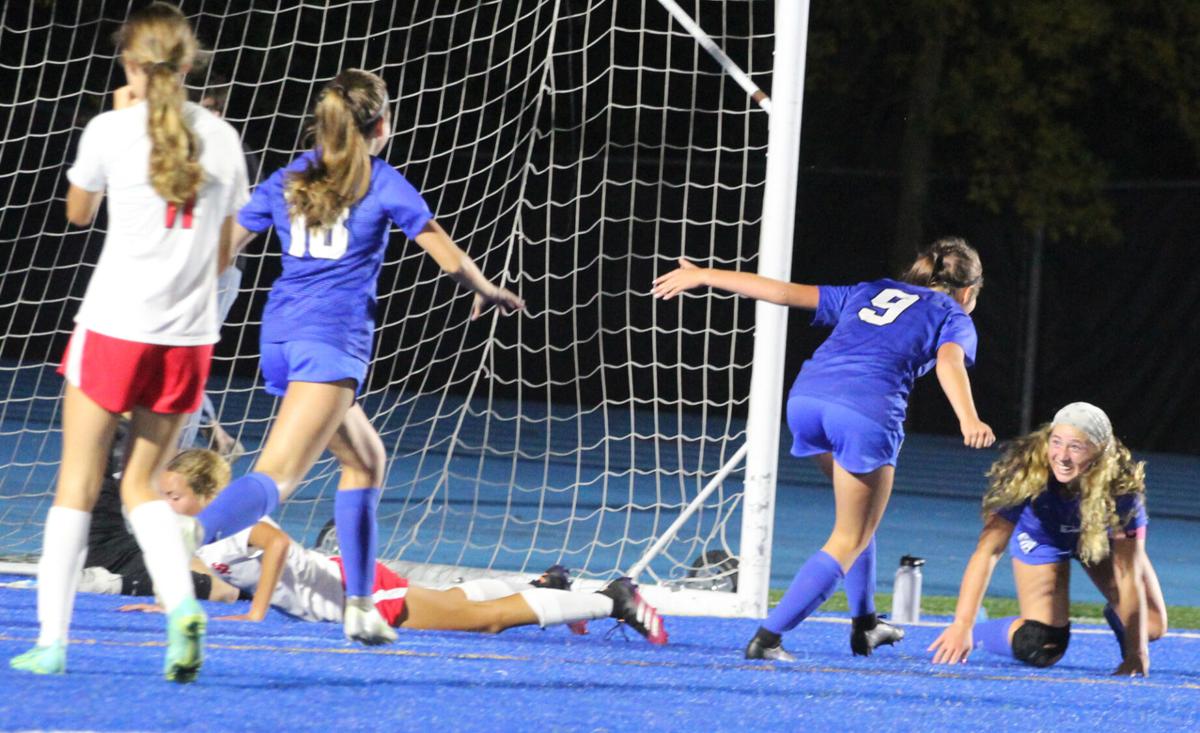 Gabby Ryan meets Alyssa Marceau after the Skipper striker scored her second goal of the first half, burying a pass from Riley Kelly (18) in a 2-1 win over Eden Prairie. 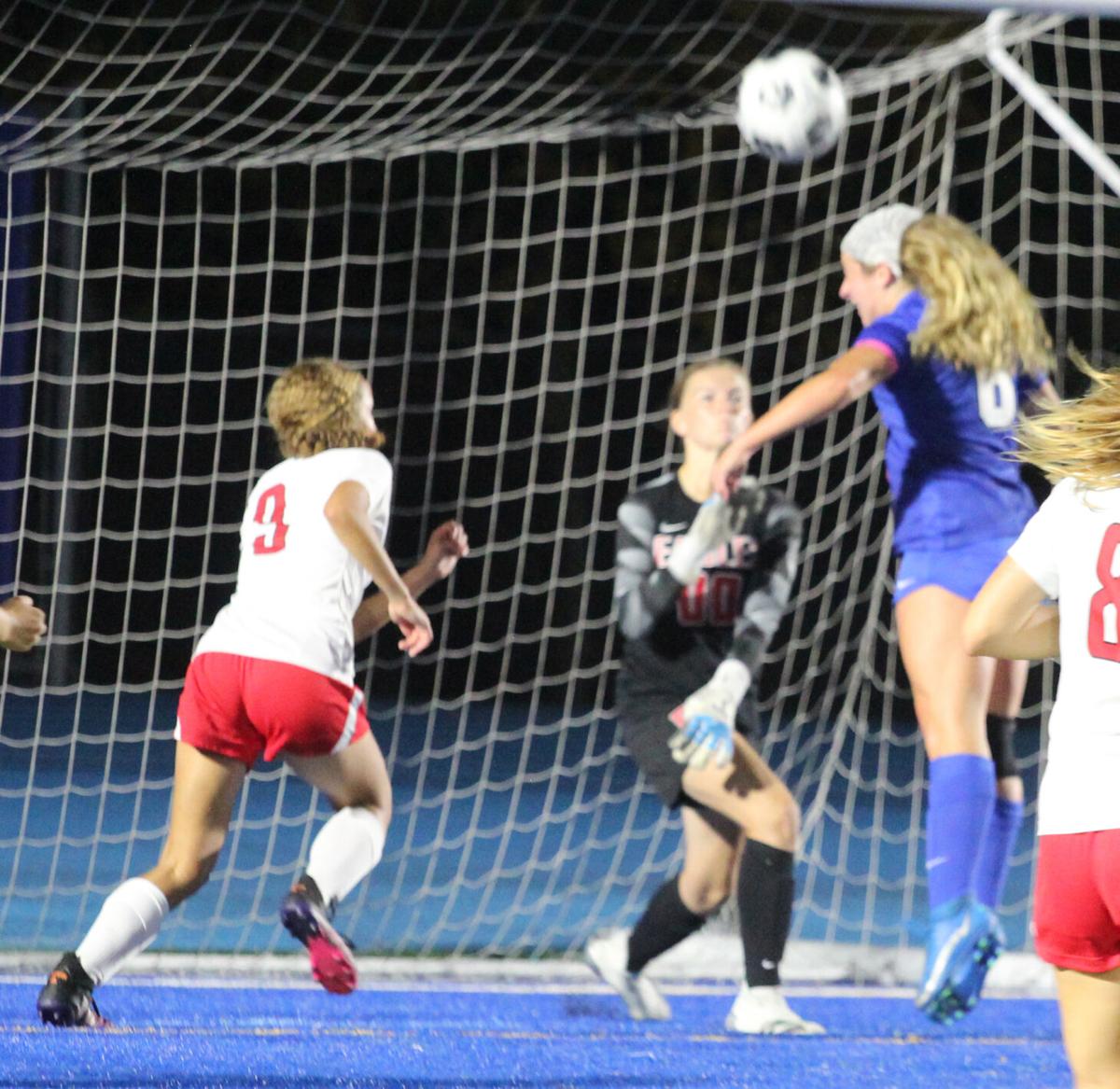 Minnetonka's Alyssa Marceau redirects a bounce ball with her head into the back of the net for the 1-0 lead versus Eden Prairie on Sept. 30. 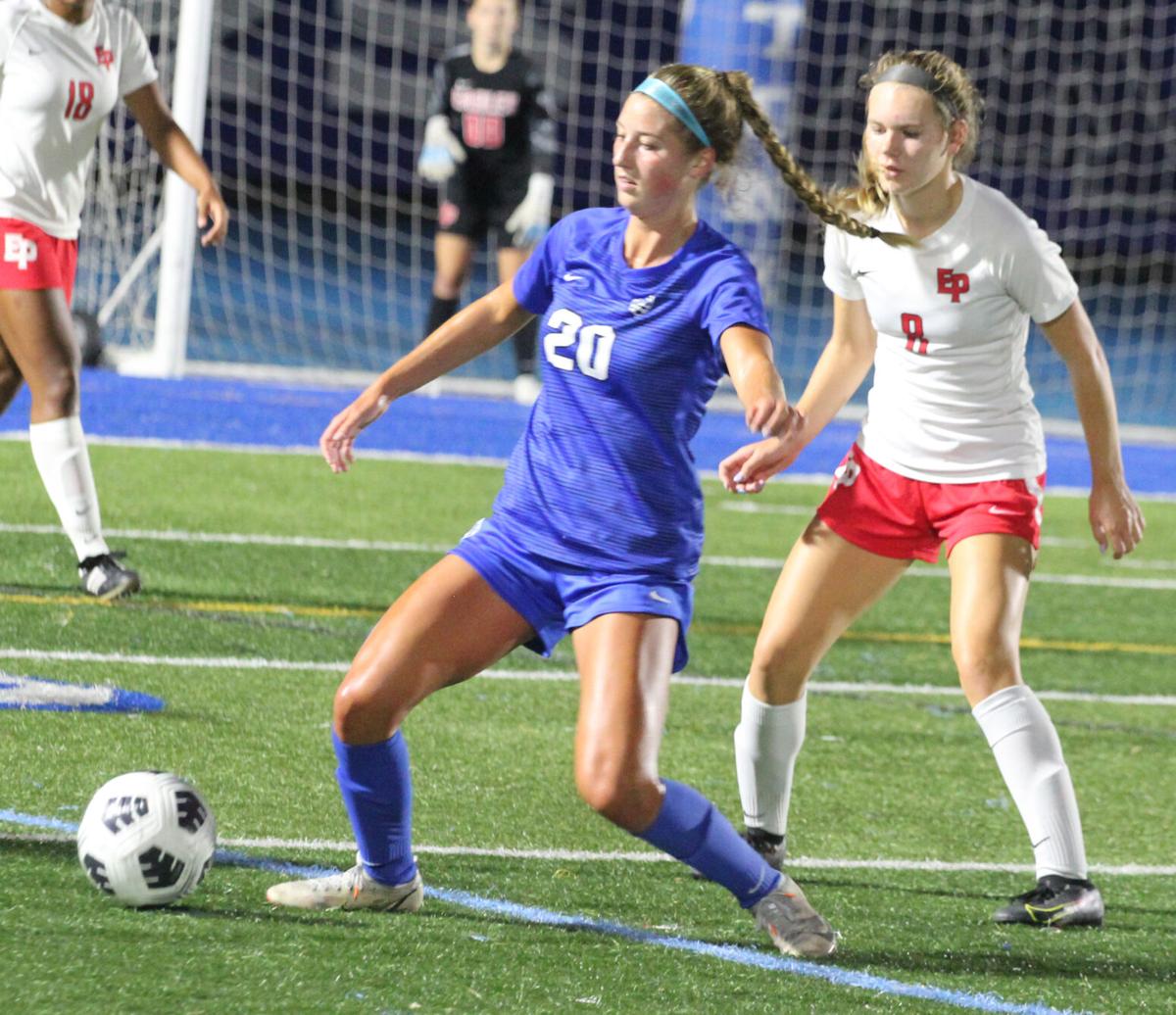 Claire Carver maintains possession, something Minnetonka excelled at over the first 40 minutes against Eden Prairie, grabbing a two-goal lead in a win.

Gabby Ryan meets Alyssa Marceau after the Skipper striker scored her second goal of the first half, burying a pass from Riley Kelly (18) in a 2-1 win over Eden Prairie.

Minnetonka's Alyssa Marceau redirects a bounce ball with her head into the back of the net for the 1-0 lead versus Eden Prairie on Sept. 30.

Claire Carver maintains possession, something Minnetonka excelled at over the first 40 minutes against Eden Prairie, grabbing a two-goal lead in a win.

A well executed first half, Minnetonka controlling play much of the first 40 minutes, two Alyssa Marceau goals stood up in a 2-1 win over Eden Prairie at Einer Anderson Stadium Sept. 30.

The Skippers are 4-4 in the Lake Conference, sweeping the season series against the Eagles.

Riley Kelly, just seconds after entering the contest, had a throw-in into the box bouncer over a Minnetonka teammate, Marceau alertly sneaking behind for a shot and goal unmarked for the 1-0 lead in the 12th minute.

Marceau quickly made it 2-0, a combination of passes, including an assist from Celia Aasheim on a cross, midway through the first half.

Maddy Davey's rocket from 20 yards out at the 1:49 mark of the first overtime was the final difference in Chaska's 3-2 road win at Bloomington Jefferson Sept. 30.

The loss snapped a four-game win streak for the Jaguars.

A throw-in to Paige Bakke started the scoring play, a cross to the middle finding the foot of Davey, who faced, found space and drilled a shot under the crossbar.

Davey tied the game in the first half on a similar shot at 1-1.

Eighth grader Addie Schneider gave Chaska a 2-1 lead into halftime on a shot that hit a Bloomington Jefferson defender and bounced over the head of the goalkeeper into the net.

Ayah Makled netted two goals for the Jaguars, one in each half.

Chaska (4-5-1) looks for the Bloomington sweep at Penn Avenue stadium for a second consecutive season at 5 p.m. on Tuesday, Oct. 5.

Two teams entered play on the last day of September tied atop the Metro West Conference girls soccer standings. One team remains unbeaten on the first day of October.

Chanhassen scored twice in the first half, handing host Waconia its first league loss in seven matches, a 2-1 decision Sept. 30.

The Storm, held scoreless in four of the last five matches, broke through twice, only the fourth team to do so against nine-win Waconia. Grace Fogarty opened the scoring with Kennedy Beld scoring the winner before halftime.

Jordan Grell netted a goal for the Wildcats from Brynley Theis.

Chanhassen (8-4-1) is 4-3 in the Metro West Conference into Tuesday's match with Class 2A top-ranked Benilde-St. Margaret, which is undefeated at 12-0.

Gabby Legg, Mary Furlong, Katie Anseth, and Sophia Terris also scored the Fire, which are 8-2-2 overall and 5-1 in the Wright County Conference, just a half-game behind Southwest Christian.

It was the first varsity goal for Terris.

Olivia Paidosh made 11 saves for the Fire, which attempted 27 shots themselves.

A pair of teams with double-digit victories, No. 3-ranked Southwest Christian and Delano played 90 minutes of scoreless soccer, a 0-0 draw on Sept. 30 in Chaska.

The Stars, 5-0-1 in the Wright County Conference, need a win over last-place Rockford/Howard Lake-Waverly-Winsted or a Holy Family Catholic loss to Watertown-Mayer on Oct. 5 to clinch the league title outright.