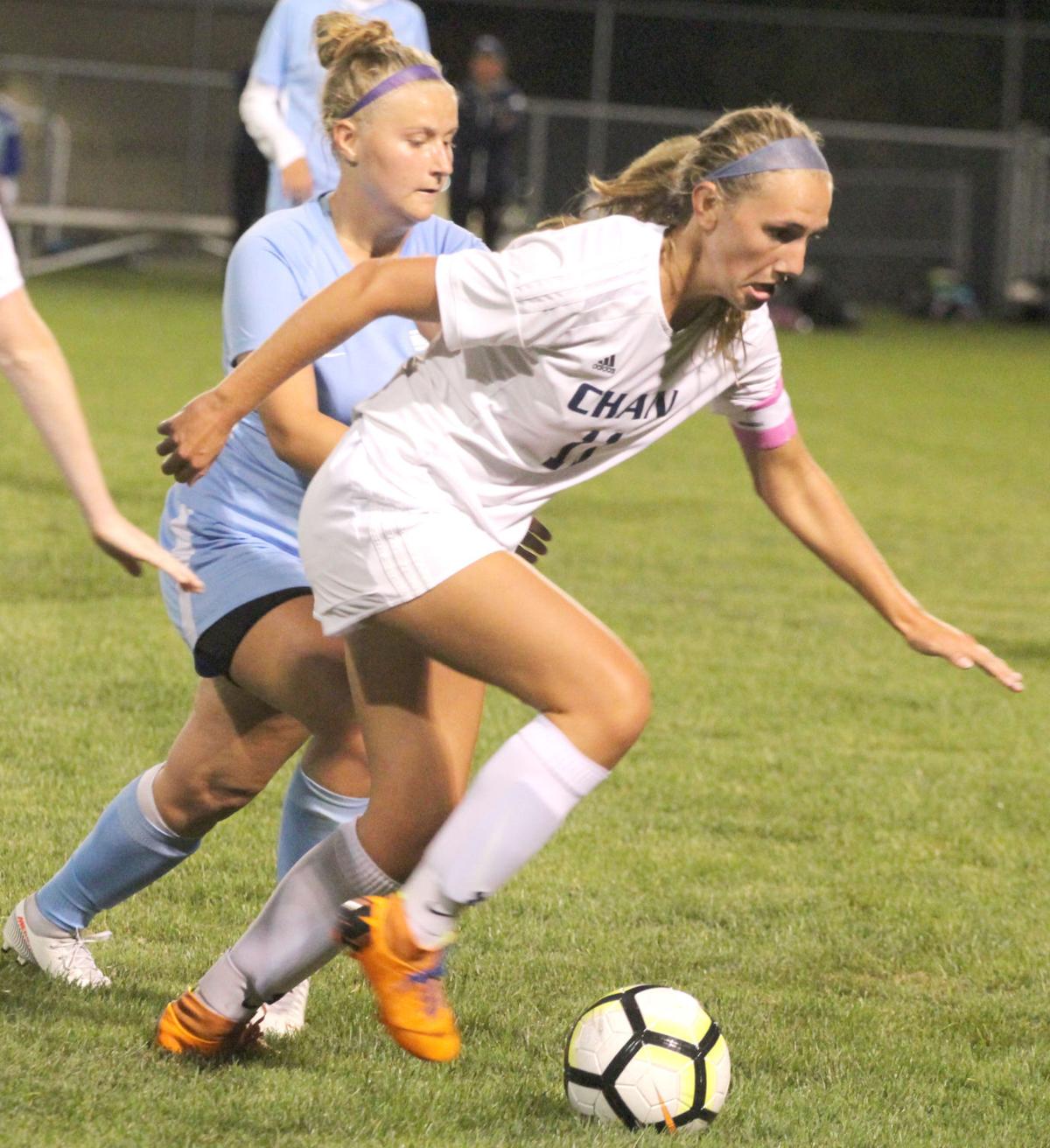 Chanhassen captain Colleem Westerhaus netted the eventual game-winner in a 2-0 decision over Bloomington Jefferson Sept. 1. A senior, this is the end for the Westerhaus family in the Storm soccer program; a daughter on varsity all but one year of the team’s existence. 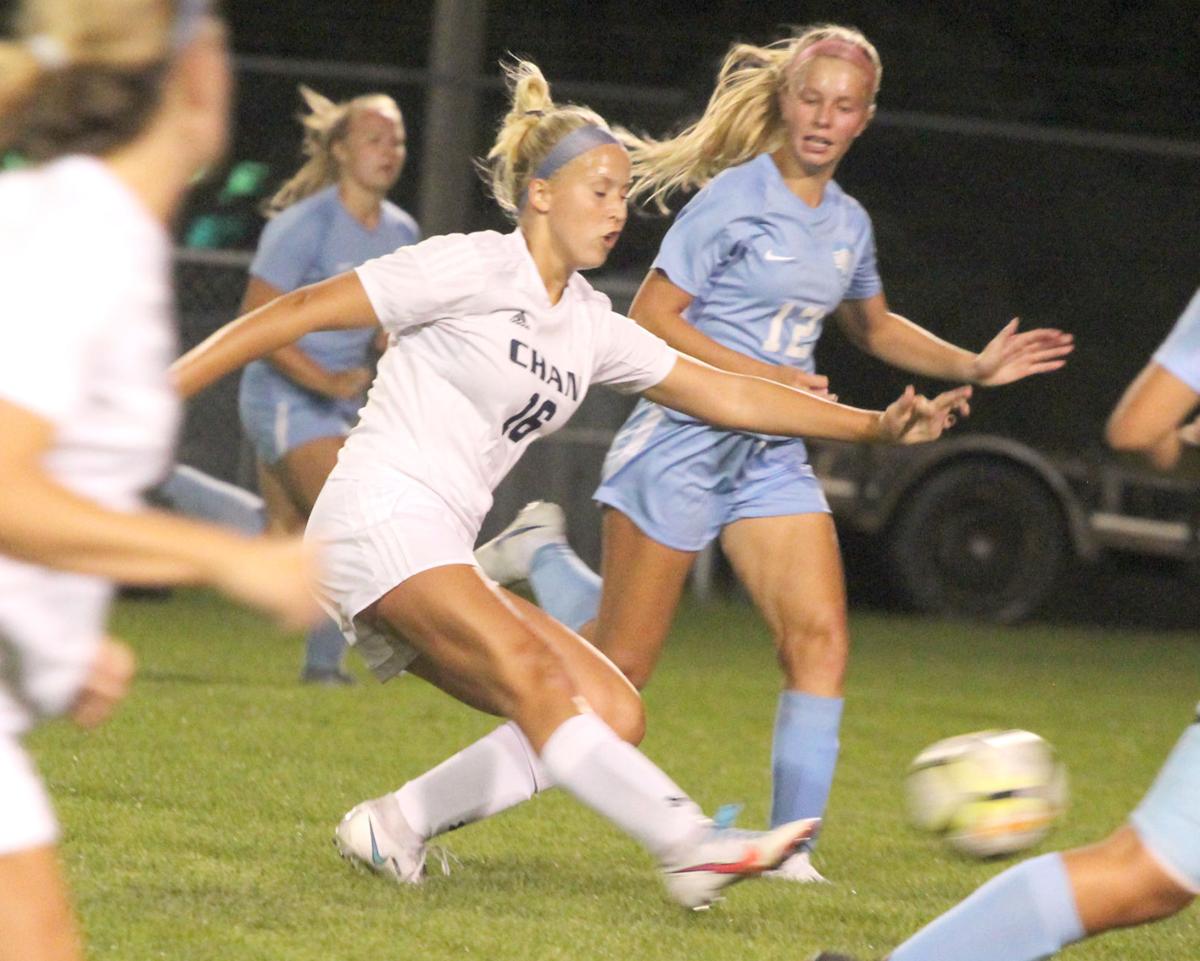 Chanhassen captain Colleem Westerhaus netted the eventual game-winner in a 2-0 decision over Bloomington Jefferson Sept. 1. A senior, this is the end for the Westerhaus family in the Storm soccer program; a daughter on varsity all but one year of the team’s existence.

Chanhassen scored more than two goals in a match just once in 2019. They were shutout seven times. A total of 11 scores were registered last season in a 3-9-1 campaign.

Three matches into the 2020 fall season, the Storm already own three wins. And after scoring twice Sept. 1 in a victory at Bloomington Jefferson, they passed their 2019 season total of goals, now with 13.

A stark contrast, but certainly something not unexpected with Chanhassen returning 10 varsity regulars to the pitch.

"I feel like this year our chemistry is more than we've had past years. We're very united, working together really well," Chanhassen senior captain Taryn Gellner said.

"You hear the encouragement, not just on the field, but from the bench. It is so positive and uplifting, it definitely helps us in the game," Chanhassen senior Colleen Westerhaus said.

The most interesting stat through wins over Robbinsdale Cooper (6-0), Bloomington Kennedy (5-1) and Bloomington Jefferson (2-0) is the amount of different goal scorers.

Thus far, eight different Storm players have found the twine including Westerhaus and Kennedy Beld with three each.

"Obviously it's talent, but I just feel way more connected with my teammates right now. We're all on the same page. Even the new players, we're really trying to uplift them, give them the confidence to take those shots and score goals," Westerhaus said.

"I feel like we're working for each other, not ourselves, more than we ever have," said Gellner, a state track participant on a relay in 2018.

Westerhaus was Chanhassen's go-to scorer as a sophomore until a knee injury in a section win over Prior Lake ended her season. After returning last season, the Storm captain has shifted positions this year, moving to outside back.

Don't let her defensive title fool you. Her and Gellner have both the ability and blessing from the coaching staff to move up and create plays.

"I love defending up the field. Being outside back gives me the opportunity to do that and still be involved in saving a goal or a game on defense," she said.

Gellner, taking a loose ball along the left sideline, switched fields to Westerhaus outside the penalty box. Unchallenged Westerhaus struck the ball under the crossbar in the right corner for the 1-0 lead in the 31st minute.

With 3:06 to play in the first half, after Bloomington Jefferson was unable to clear a corner kick attempt from the Storm, Anika Sather drilled a shot over the outstretched arm of the goaltender for the 2-0 lead. Grace Fogarty was credited with an assist.

Jessie Maus made two saves, improving to 3-0 on the season, having allowed just one goal.

"It's a good opportunity to prove it. To show the first time beating someone wasn't a fluke," said Gellner of the double Metro West Conference schedule where teams will play each other twice (sans Chaska for Chanhassen).

Chaska is going to be hard to beat if an early-season continues.

Three games in the Hawks have yet to allow a goal, outscoring teams 8-0, including a 2-0 win over St. Louis Park on Sept. 1 at Chaska Middle School Stadium.

Kinley O'Connor led Chaska with a goal and assist. Maddy Davey netted her fourth tally of the season as well.

In net for all three Chaska home wins has been senior Jenna Williams.

Next up is Robbinsdale Cooper at home at 7 p.m. on Thursday, Sept. 3.

Play to the final whistle coaches always say to players.

Mary Furlong did just that for Holy Family Catholic. The junior scored an unassisted goal with 38 seconds remaining as the Fire topped Southwest Christian 1-0 in Victoria Sept. 1.

The Stars outshot the Fire 10-8. Bella Hocevar made 10 saves in net for the victorious Fire.

Both teams are now 1-1 overall.

* Transferring from Holy Family Catholic in 2011, the slashing midfielder had a knack for creating scoring plays with her quick feet. She was on varsity in 2011 and 2012.

* Team leader in goals as a sophomore; lost to a knee injury in playoff win over Prior Lake in 2018. She returned to the line-up last fall and has shifted to defense as a senior captain, yet is tied for the team lead with three goals.