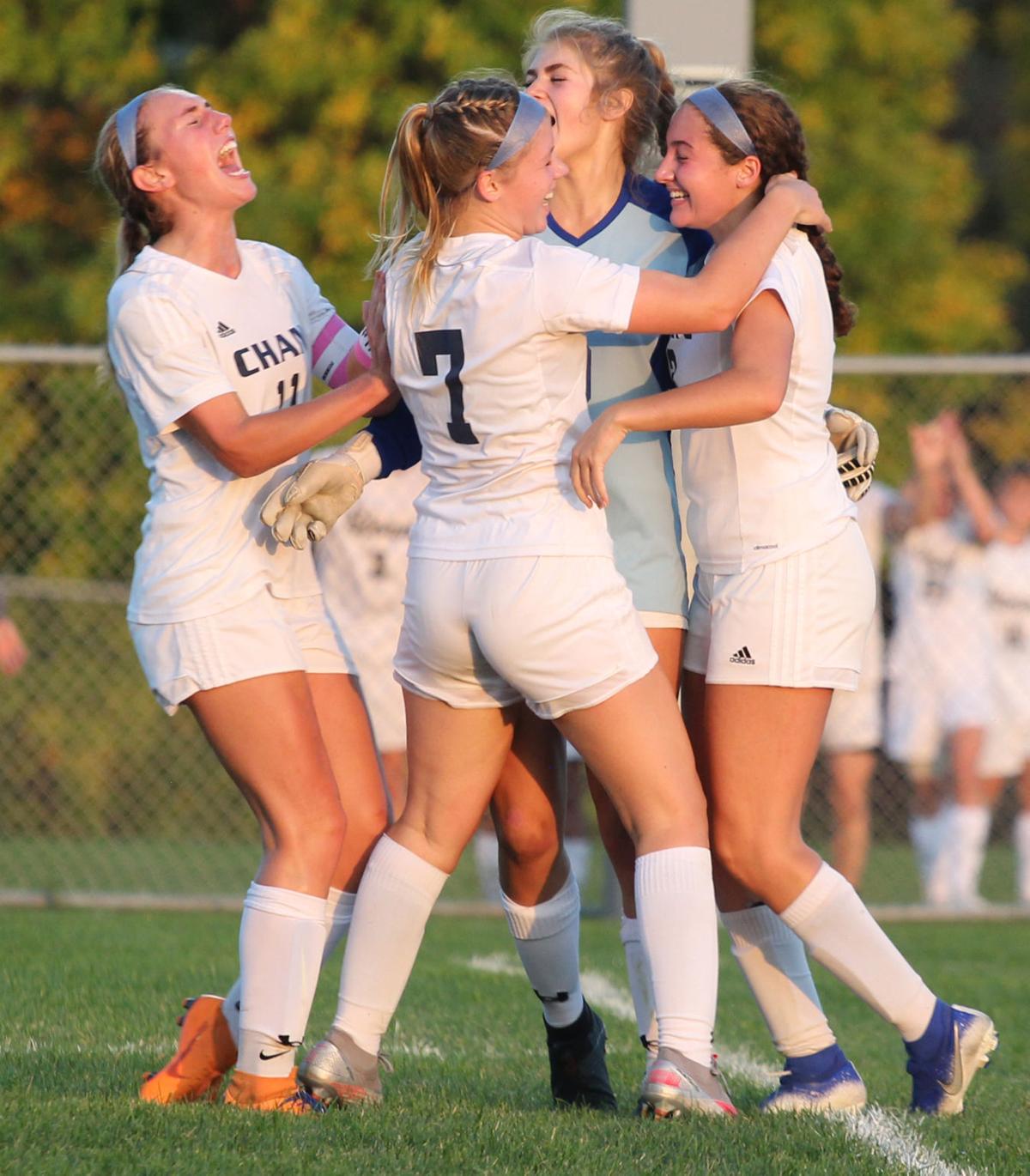 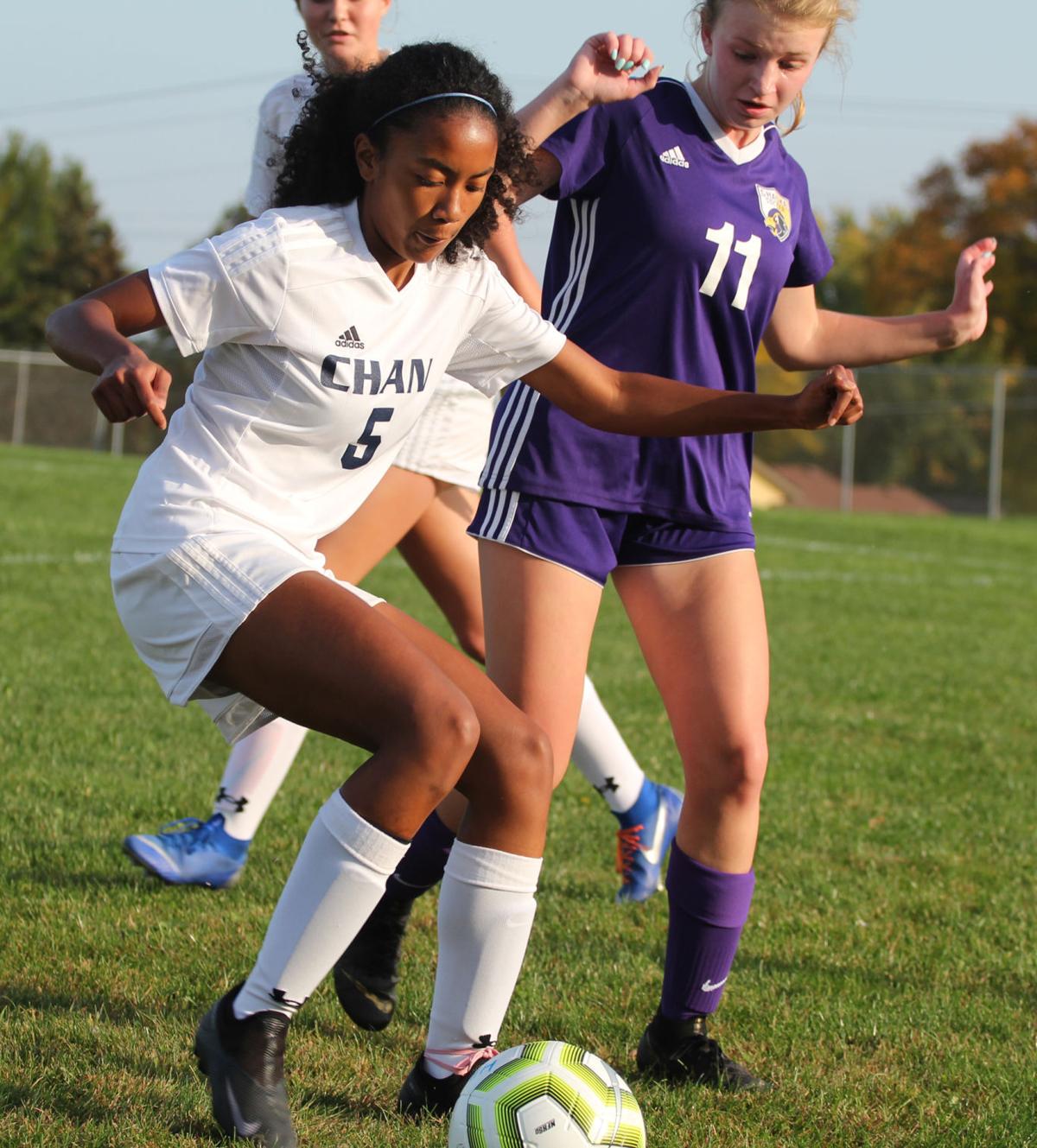 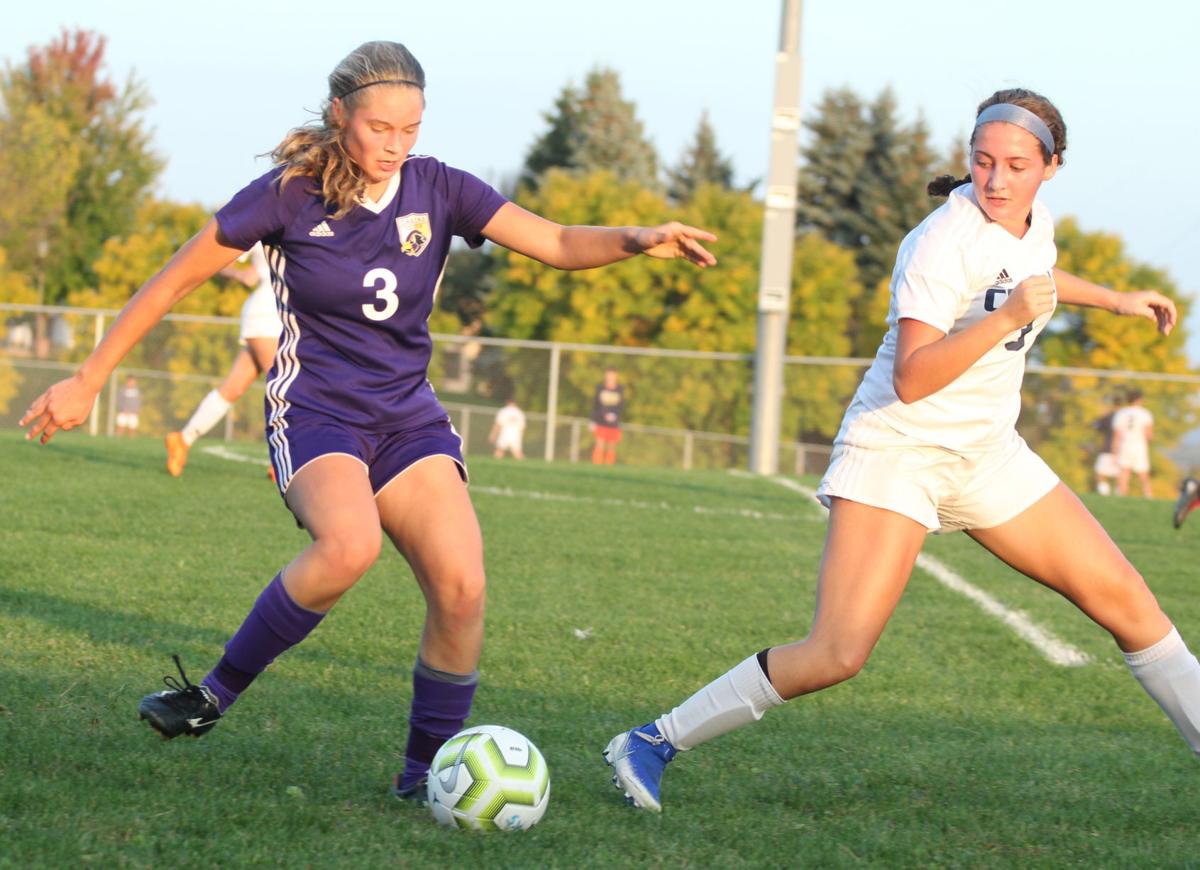 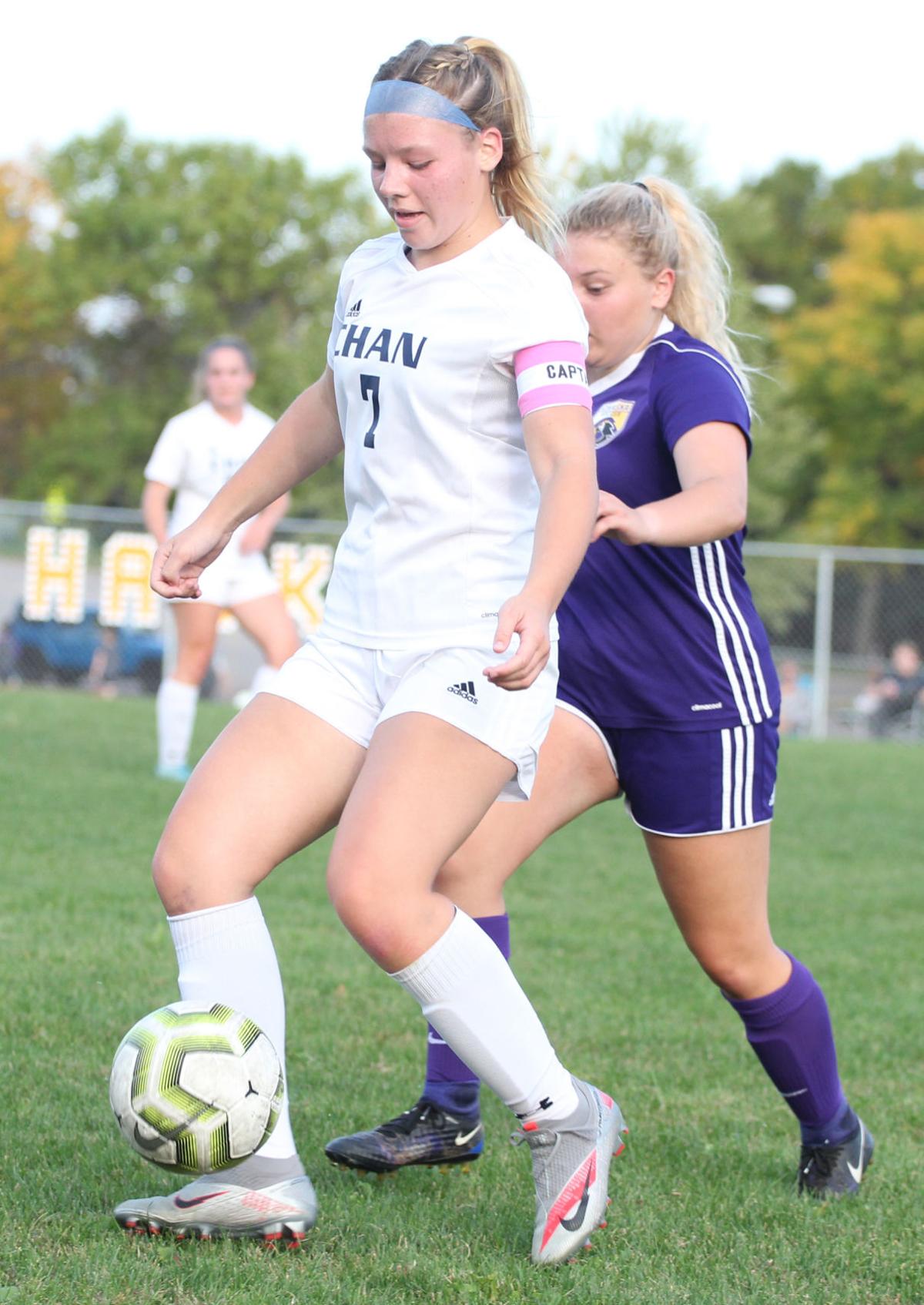 Chanhassen midfielder Leah Naples owned the middle of the field, helping the Storm defense allow just one shot on goal in a 2-0 win over Chaska. 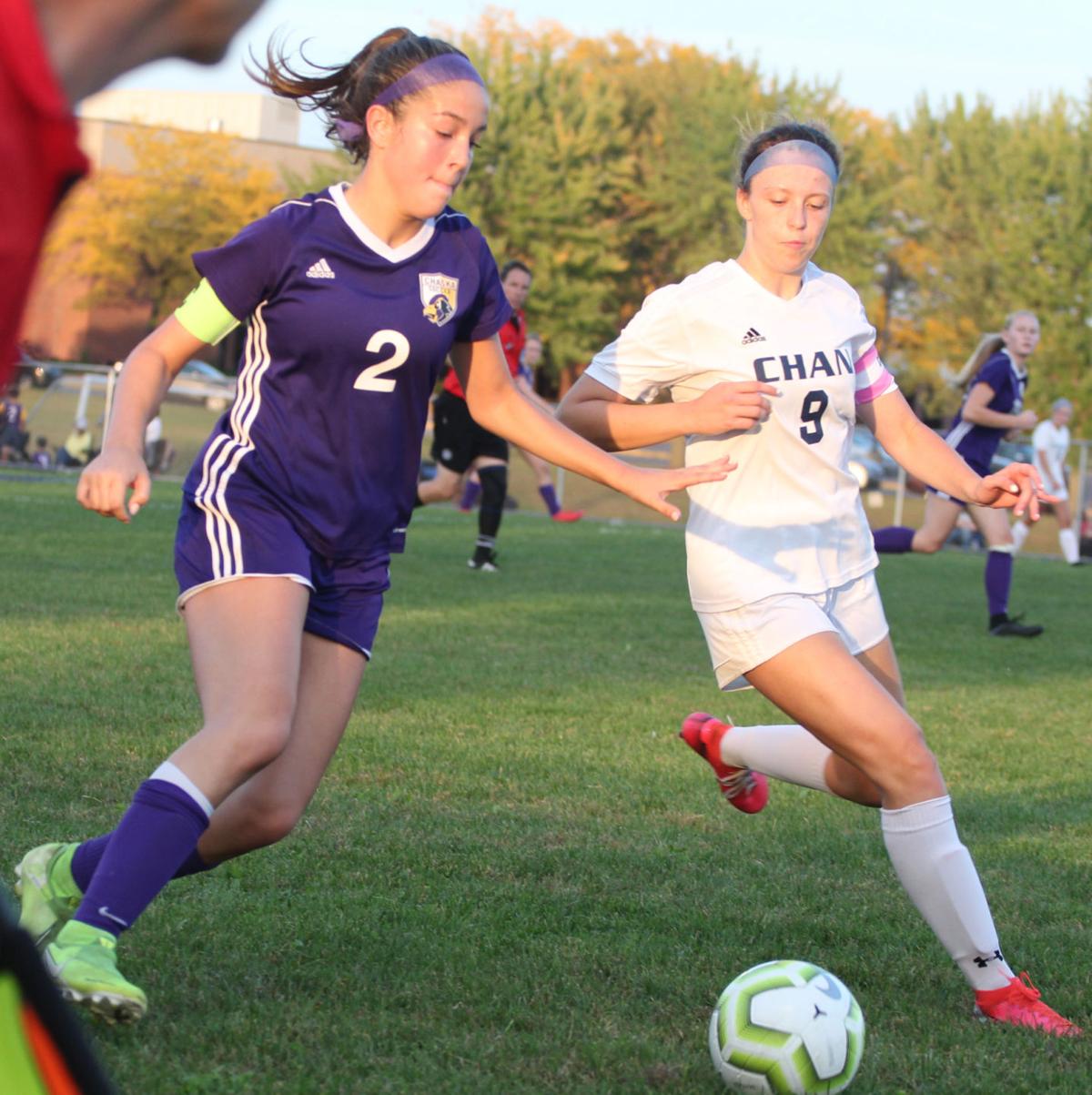 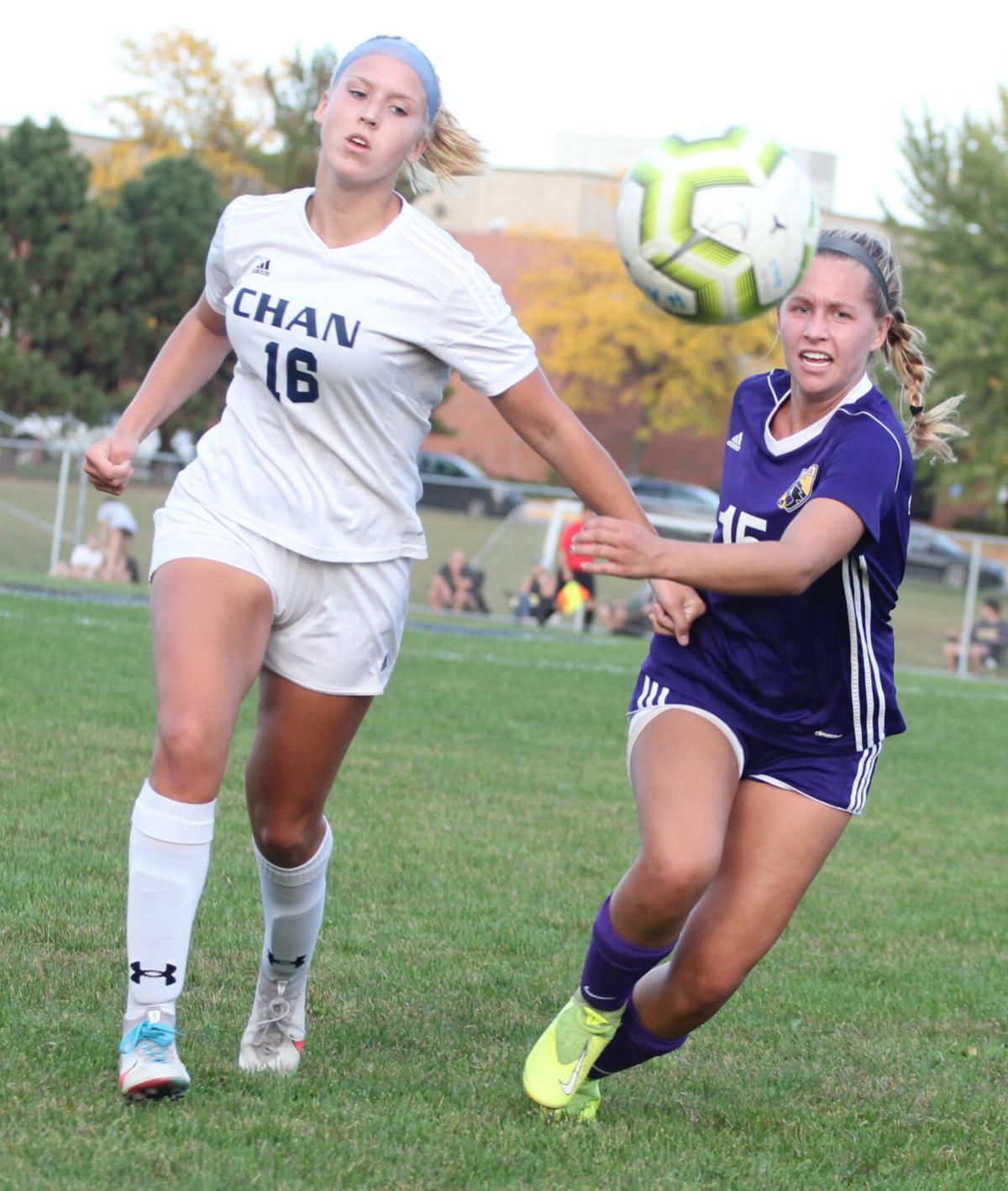 Chanhassen's Kennedy Beld and Chaska's Abby Rogers chase a bouncing ball in the first half of a 2-0 Storm win on Sept. 24. 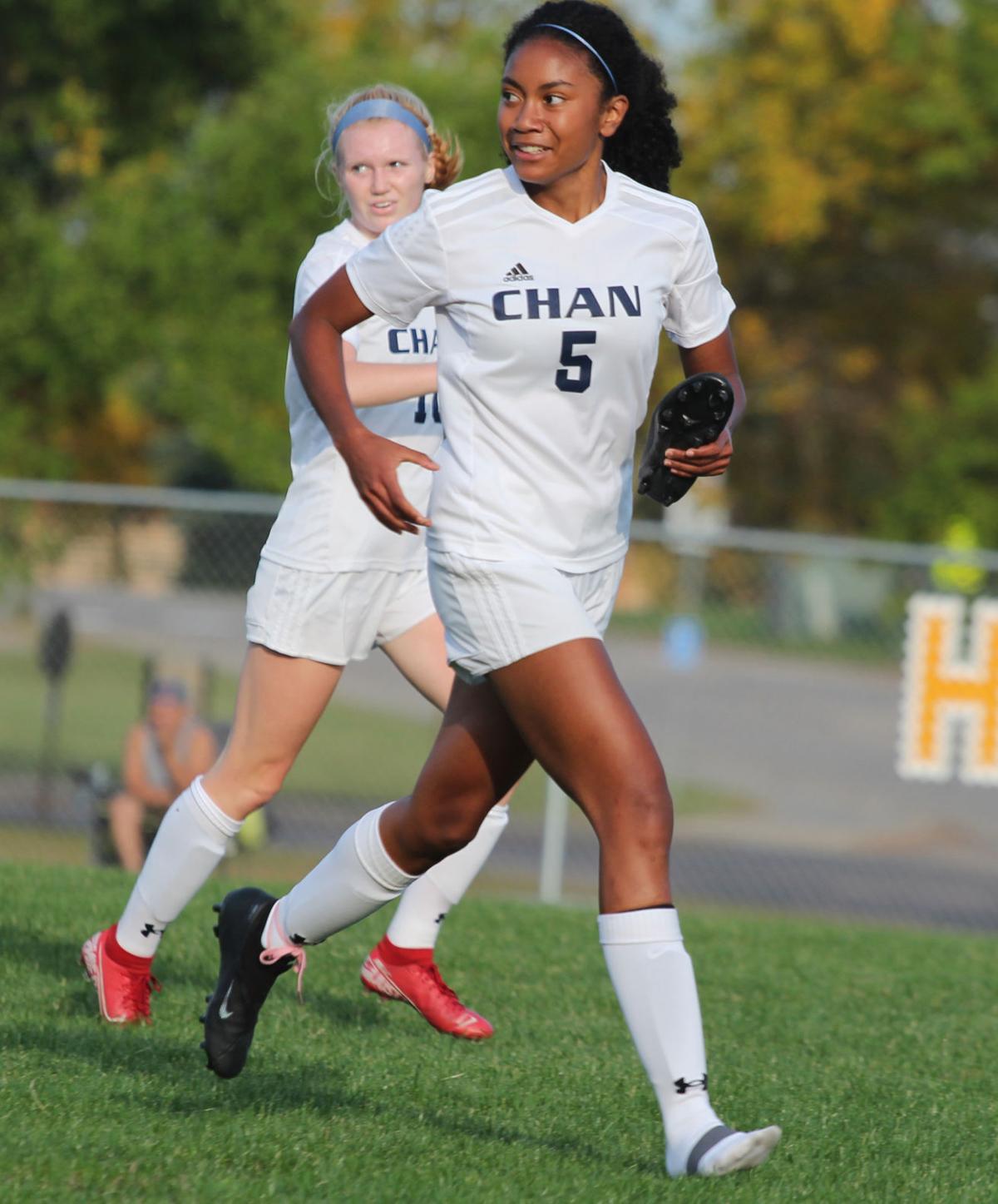 How fast is Diane Rakotomalala? The Chanhassen senior sprinted out of her shoe, continuing her run downfield with her shoe in her hand. 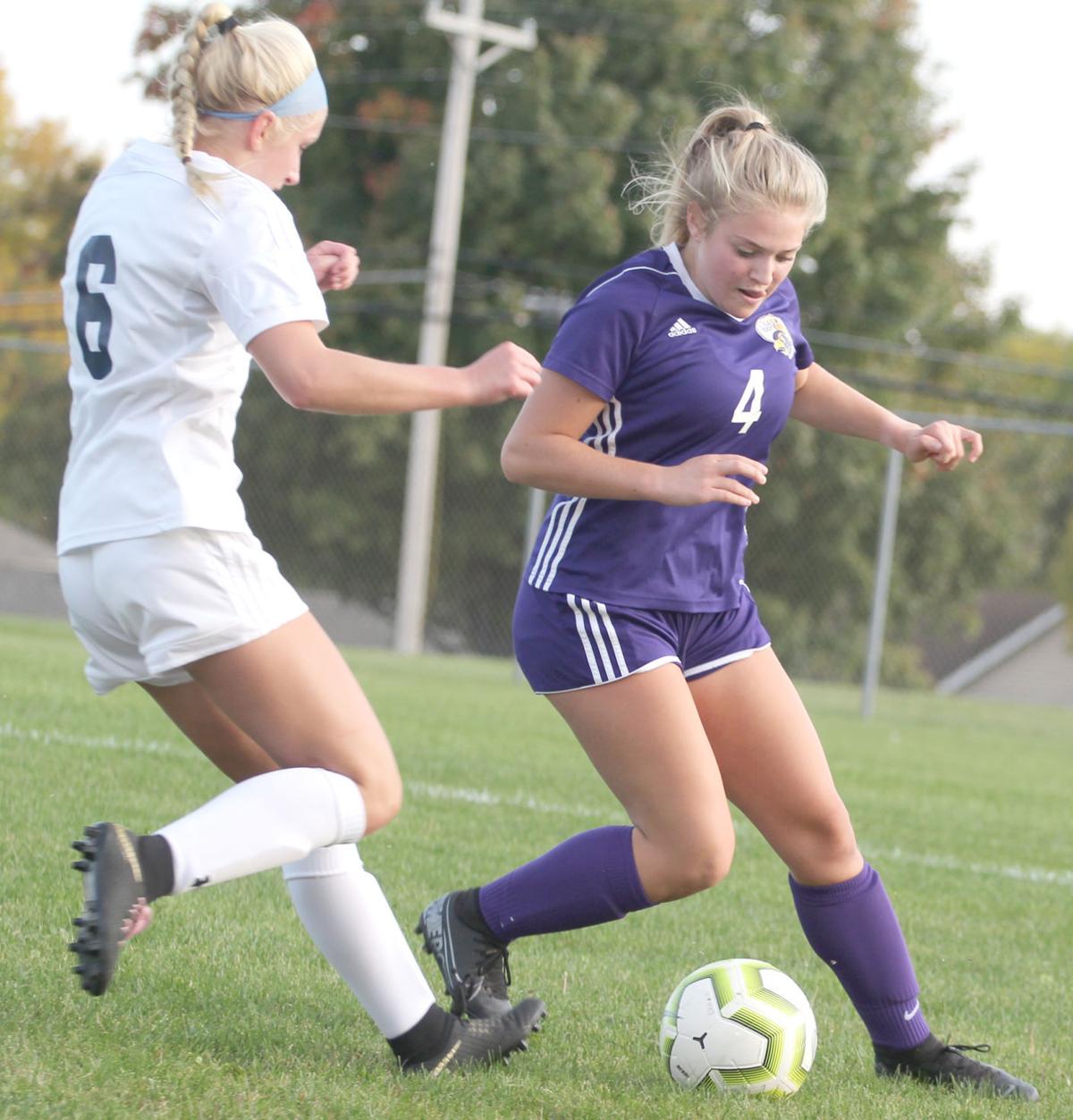 Chaska's Carly Glassberg and Chanhassen's Anika Sather work for possession in the corner.

Chanhassen midfielder Leah Naples owned the middle of the field, helping the Storm defense allow just one shot on goal in a 2-0 win over Chaska.

Chanhassen's Kennedy Beld and Chaska's Abby Rogers chase a bouncing ball in the first half of a 2-0 Storm win on Sept. 24.

How fast is Diane Rakotomalala? The Chanhassen senior sprinted out of her shoe, continuing her run downfield with her shoe in her hand.

Chaska's Carly Glassberg and Chanhassen's Anika Sather work for possession in the corner.

Chaska's success offensively is no secret. Get the ball up top to Sammie Ramboldt and Maddy Davey and let the talented attackers go to work.

The Hawks are 5-0 when Davey finds the net. From the start Sept. 24, Chanhassen paid close attention to No. 3. Running a four-player back row, the Storm held Chaska to just one shot on goal.

A dominating defensive performance from the back row, especially Elisabeth Gerebi and Mollie Puffett in the middle. There just was no space for Chaska in its offense in a 2-0 Chanhassen win.

It was the first victory over the Hawks since 2017.

"I've been on varsity since sophomore year and I just knew it couldn't be three losses in three years to Chaska," Chanhassen senior captain Leah Naples said. "This is the game I've been thinking about since last season."

"It's our last year, and there was nothing to lose, so we just went for it, played one of our best games this season," Chanhassen senior Diana Rakotomalala said.

Chanhassen moved the ball around the field as well as they had all season. With Colleen Westerhaus and Taryn Gellner pushing the ball from their outside back positions, Anika Sather and Haley Von Rentzell attacking at the next level, the Storm controlled play for much of the game.

Chanhassen was able to maintain the attack as midfielders Naples and Grace Fogarty continually won balls in the middle of the field.

"When we scored that first goal, it was amazing, but then I thought about how we needed to play really good defense. Playing center mid, in the beginning I was attacking more, but later on I stayed a lot more defensively. I really think as the game went on we just kept getting the ball up, away from their scorers," Naples said.

It was that pace of play in the middle of the field where Chaska was a step slow, similar to a loss to first-place Benilde-St. Margaret. Their best chances coming on a Kinley O'Connor free kick over the bar and a diving left-footed strike from Kaylee Van Eps in the box that was saved by Chanhassen goaltender Jessie Maus.

"I think we're just as quick (as Chanhassen and Benilde), it's more physicality. If you don't have a referee, and I'm not criticizing, who is calling a close game, we're at a disadvantage in a game like this. We're smaller. We're slighter. It's harder to be successful in a game like this. One corner kick we had Kinley guarding Kennedy Beld. There's probably a foot difference," Chaska head coach Steve Vuolo said.

After a scoreless first half, Gellner off the corner kick connected with the head of Rakotomalala with the first touch. After a scrum resulted in Chaska goaltender Jenna Williams knocked to the ground, the ball found the foot of Westerhaus for the 1-0 score in the 49th minute.

"I already got yelled at the last game because I'm coming back from a concussion and I headed one there. I heard her voice in my head, but it's instinctive there to go for it with your head," said Rakotomalala, a state relay track qualifier in 2019 as a sophomore.

"Colleen is always there, in the right spot, for those loose balls. I bet that's at least three times Colleen has scored off a Taryn corner. They have a great connection," Naples said.

Vuolo said the game plan was to have Van Eps guard Westerhaus in the corner situations. And it worked, he said, but in a "mosh pit" scenario, Chanhassen's more physical style won out.

Starting the game as a reserve, Rakotomalala, in just her second game back from injury, showed great flashes in the first half. So Chanhassen head coach Katie Clark started her in the second half.

Rakotomalala was rewarded with her strong game with a goal with 5:38 remaining, a long shot under the cross bar for the 2-0 final. She wasn't even sure it went into the goal until teammates began celebrating.

"The second half, yeah I felt more comfortable. I was just trying to get up there, pressure the ball, make something happen," Rakotomalala said. "Honestly, my eyesight is really bad. I thought it went behind the goal."

"I can still picture your face. This surprised, happy look," Naples said.

Chaska is tied with Chanhassen at 6-2 in the Metro West Conference with three matches to play. Benilde-St. Margaret is unbeaten at 6-0.

"Our best versus their best, and they won," Vuolo said. "They were the better team. We have a lot of seniors that are emotional and I feel for them, but they'll rebound, they'll recover."

The Storm play Benilde on Oct. 1 at home, a contest with Bloomington Jefferson preceding on Sept. 29.

Chaska is at St. Louis Park and Robbinsdale Cooper Sept. 29 and Oct. 1 before hosting Benilde in the regular season finale on Oct. 6.

"Throwing out our loss to Cooper, we've had a good stretch of games and we just want it to continue," Naples said.