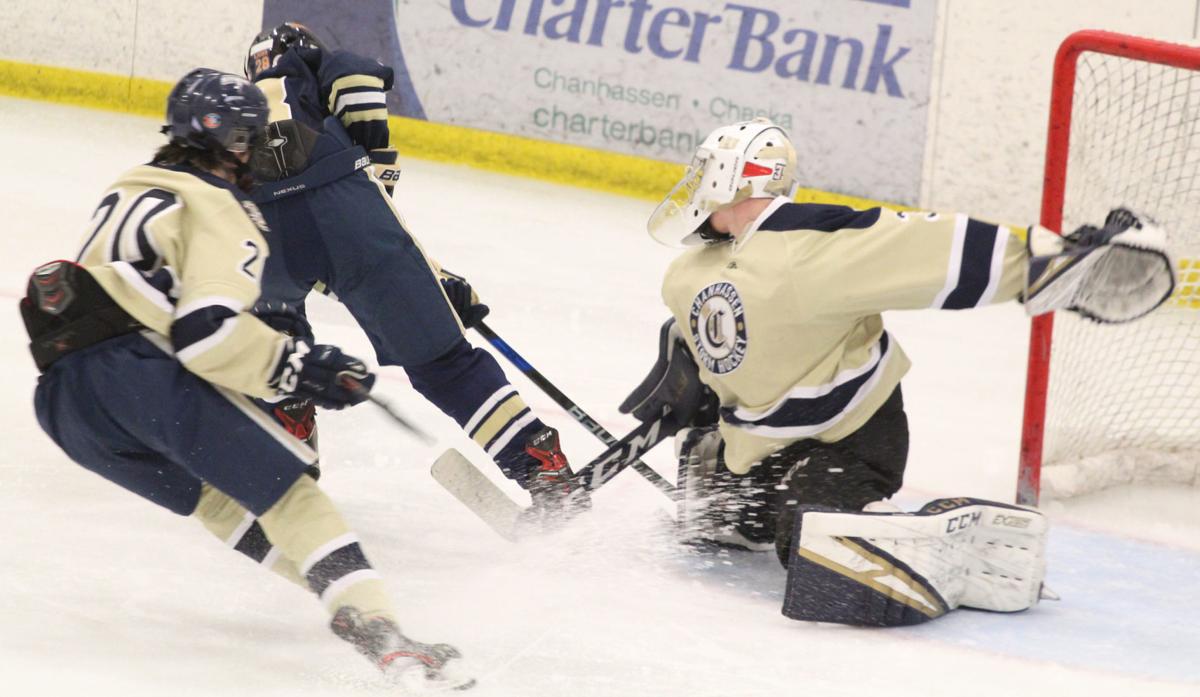 Brody Amrhein stretches his right pad, stopping a breakaway attempt from a Providence Academy player for a second-period save for Chanhassen. 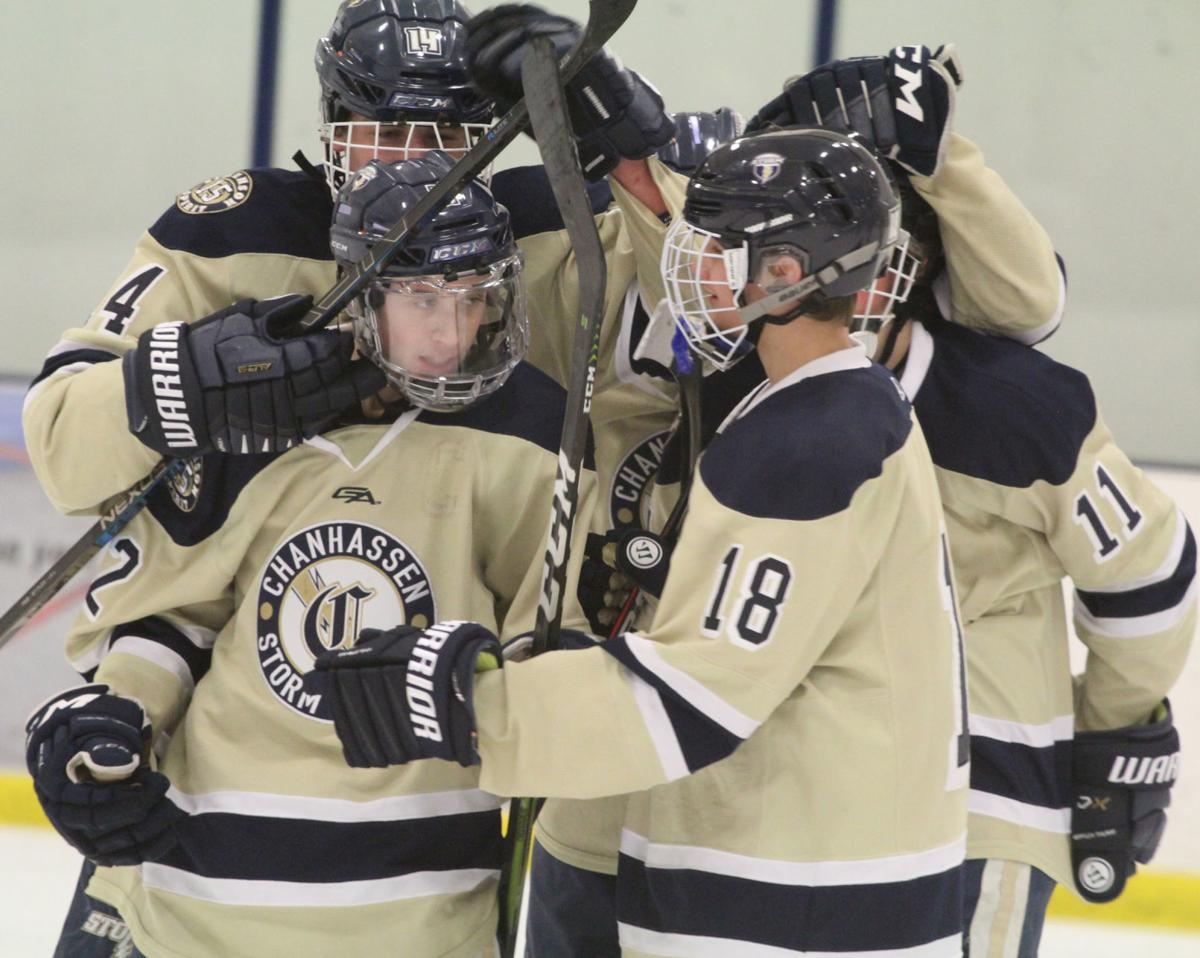 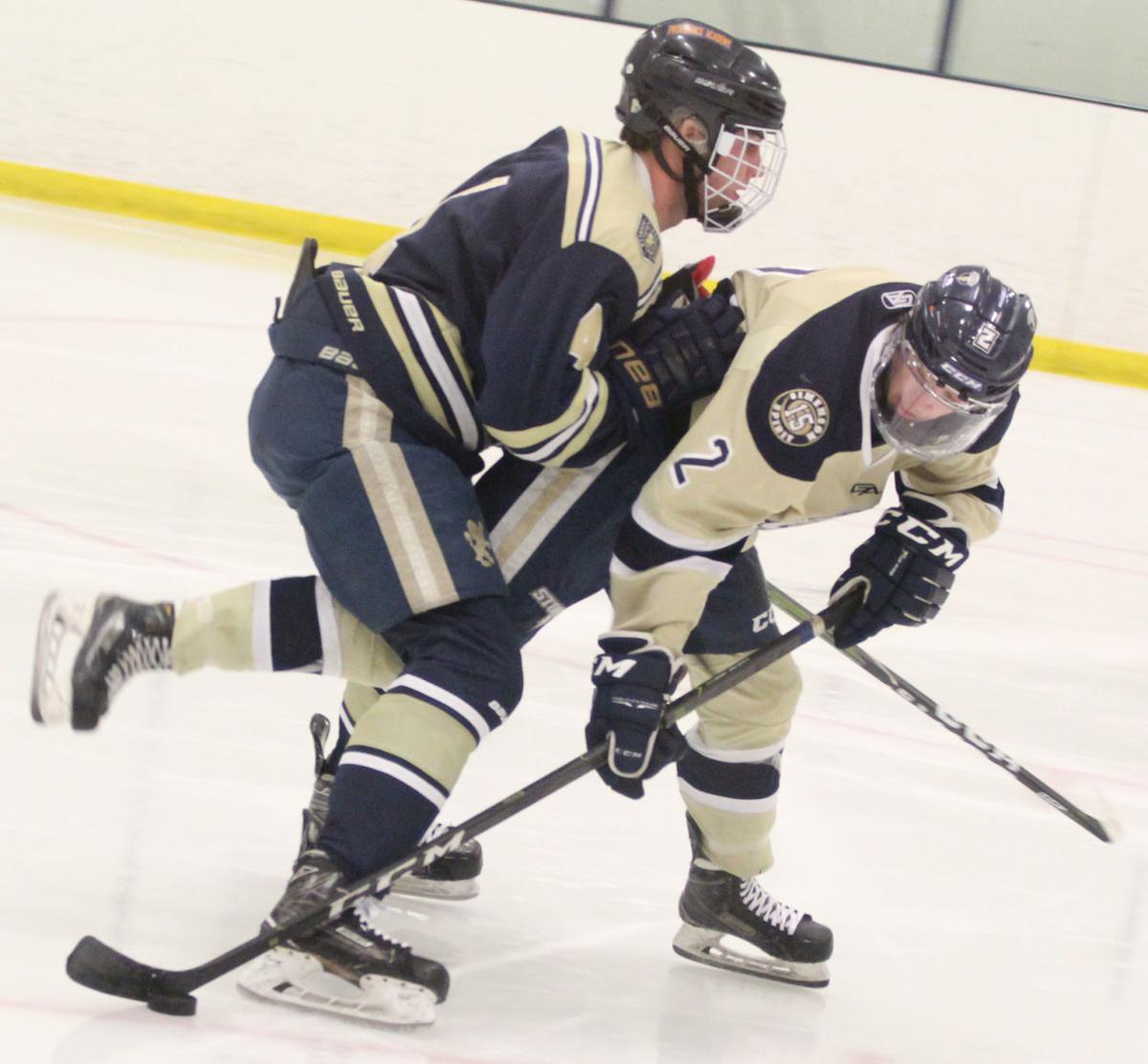 Braedan Sanders tries to bring the puck back to his stick in the offensive zone for Chanhassen. 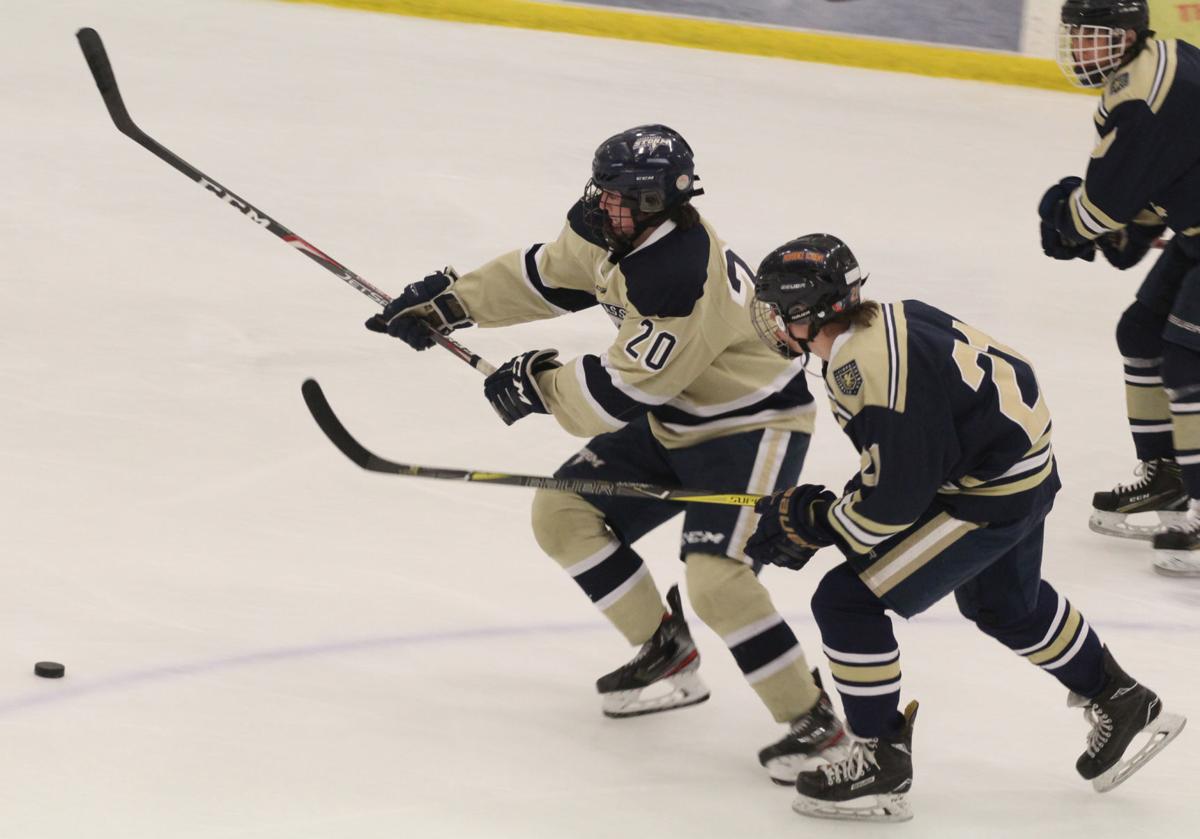 Jack Willis netted a goal for Chanhassen in a 4-3 win over Providence Academy. 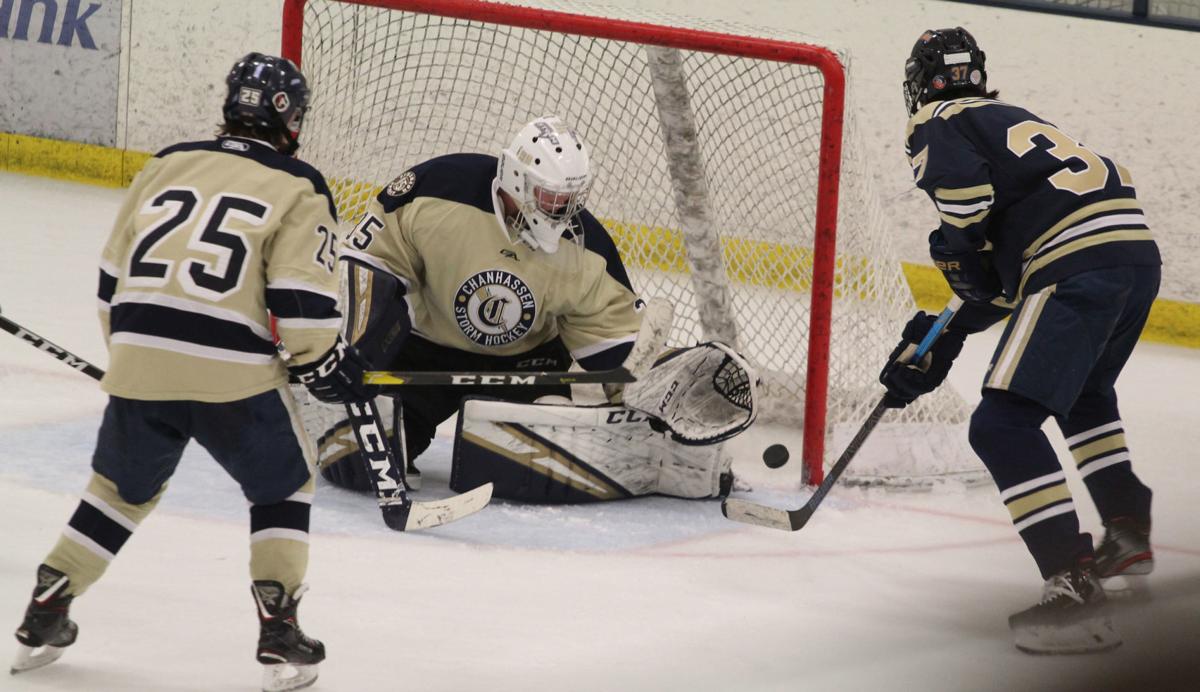 A power-play goal for Providence Academy to tie the game at three in the second period. 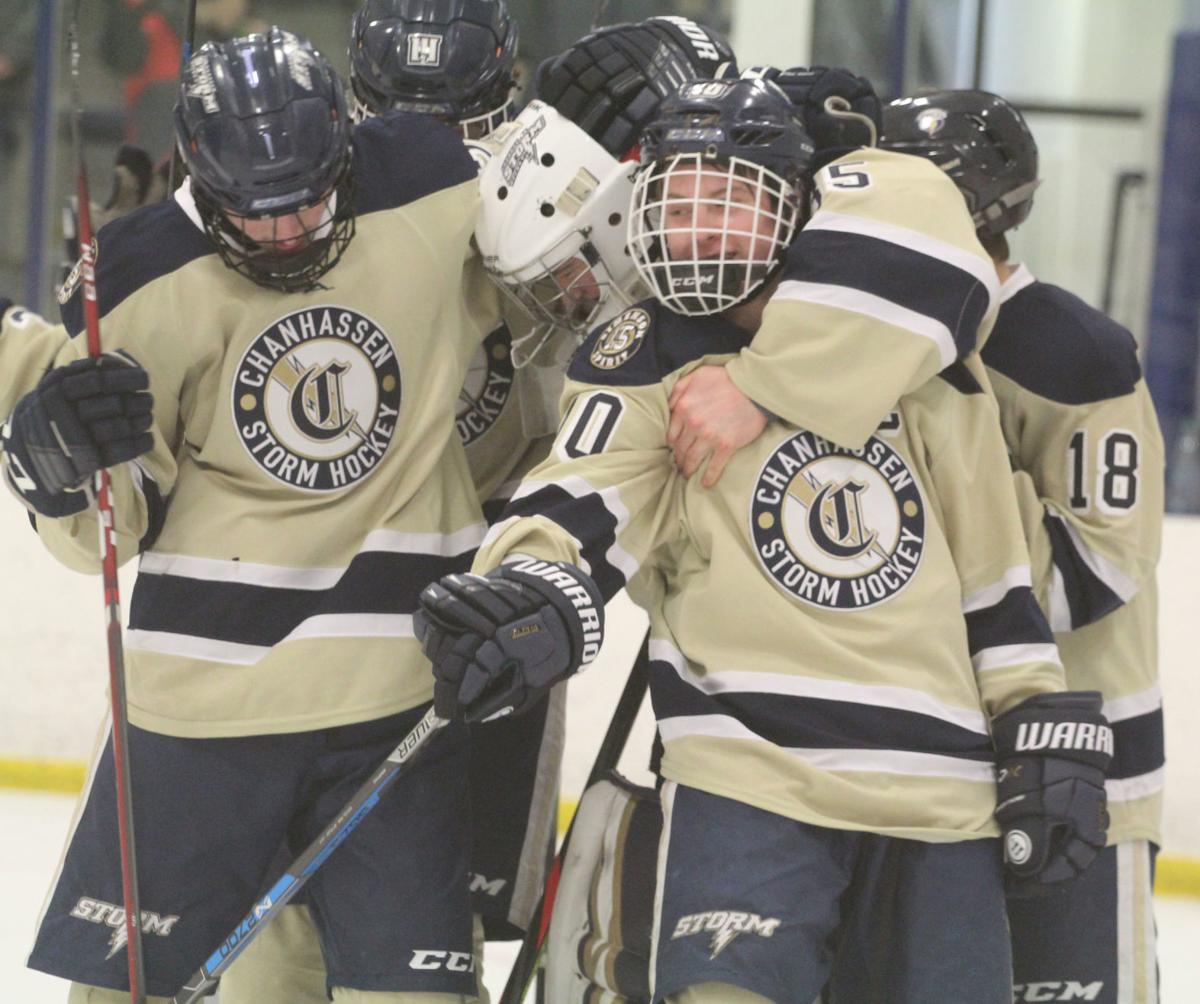 Goaltender Brody Amrhein puts his arms around teammates after a 4-3 Chanhassen win over Providence Academy Nov. 25.

Brody Amrhein stretches his right pad, stopping a breakaway attempt from a Providence Academy player for a second-period save for Chanhassen.

Braedan Sanders tries to bring the puck back to his stick in the offensive zone for Chanhassen.

Jack Willis netted a goal for Chanhassen in a 4-3 win over Providence Academy.

A power-play goal for Providence Academy to tie the game at three in the second period.

Goaltender Brody Amrhein puts his arms around teammates after a 4-3 Chanhassen win over Providence Academy Nov. 25.

Brody Amrhein started the day Nov. 25 by committing to play for the 2020 Black Bears Tier I Summer Academy team in the Boston area.

Hours later, the Chanhassen senior was starting in goal in the season opener for the Storm boys hockey team at Victoria Rec Center.

The trifecta was a 4-3 win over Providence Academy, 10 saves made in the third period. A flurry of action over the final 1:47, the Lions pulling their goaltender, made the final horn that more sweet.

Amrhein, with his 6'2" frame, putting his arm around teammates in celebration.

Amrhein made five appearances as a junior, backing up captain Josh Weyandt, the varsity starter since ninth grade. He posted wins over Owatonna and Bloomington Kennedy, allowing two or fewer goals in four of his games.

Knowing Weyandt will get most of the games this year as a fellow senior, Amrhein knows he needs to make the most of his opportunities.

"Getting the start in our barn on opening night as a senior was awesome. When you have a guy like Josh Weyandt, his talent, I like to think we go back and forth. Sometimes he gets the edge. He's a good goaltender. He has a lot of experience," Amrhein said.

Early goals from Evan Hegenes and Jack Willis had Chanhassen rolling. A fluke tally was followed by a power-play goal, Providence Academy tied with the Storm at two despite just four shots in the first period.

"I let the first goal get in my head there a little bit. I let up a shaky second one, but I was able to turn it on later in the game. That's how I expect myself to play," Amrhein said.

"It's definitely easier to play on your toes when you're facing action. When you face four shots in a period you sometimes lose focus. You got to keep the legs warm, skate around a little bit between whistles," he added.

Chanhassen retook the lead at the 3:53 mark of the second period, a Tyler Davidson penalty shot goal after he got behind the Providence Academy defense, drawing a hooking penalty.

"Tyler's lethal in that 1-and-0 situation. He has great hands, great speed. I'm really happy to have him on my team," Amrhein said.

That breakaway scenario is something Amrhein faced midway through the second period, a turnover on the power play sending in a Lion skater all alone.

Amrhein ranged to his right, easily making the pad save to keep the lead.

"You have to look in the guy's eyes like a middle linebacker in football. Try to read his eyes to see where he's going. Some guys use a head fake, so you're using always going back and forth between their head and stick and the puck. You look for that bobble. If you see that, you can pokecheck. I like being the aggressive one," Amrhein said.

Providence Academy drew even one more time on a power-play goal before Braedan Sanders netted the game-winner with 6:53 remaining in regulation on a rebound shot off an attempt on net by Mathias Bosch.

Amrhein finished with 22 saves in the win, the first of two games in three days to open the season. Chanhassen hosts Lakeville South at 7 p.m. on Wednesday, Nov. 27 at Victoria Rec Center.