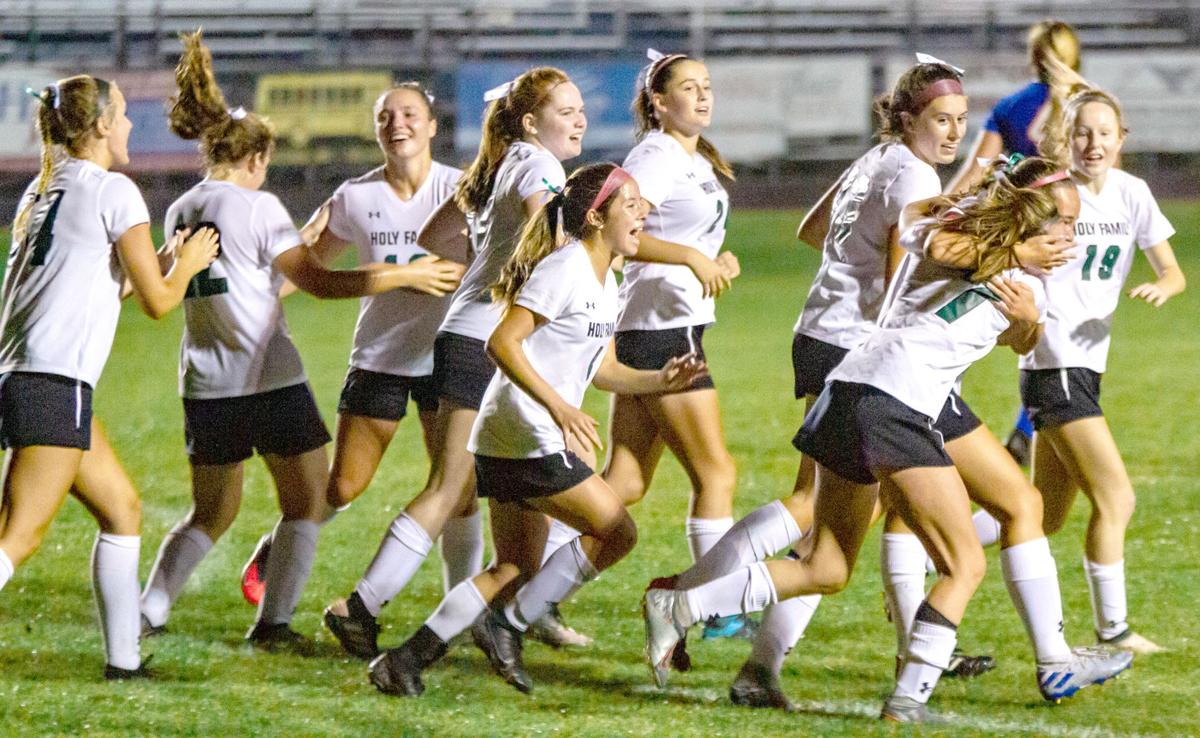 Holy Family Catholic players celebrate with freshman Brenna Westerhaus, who scored the go-ahead goal with under two minutes remaining in a victory over undefeated Watertown-Mayer Sept. 24. 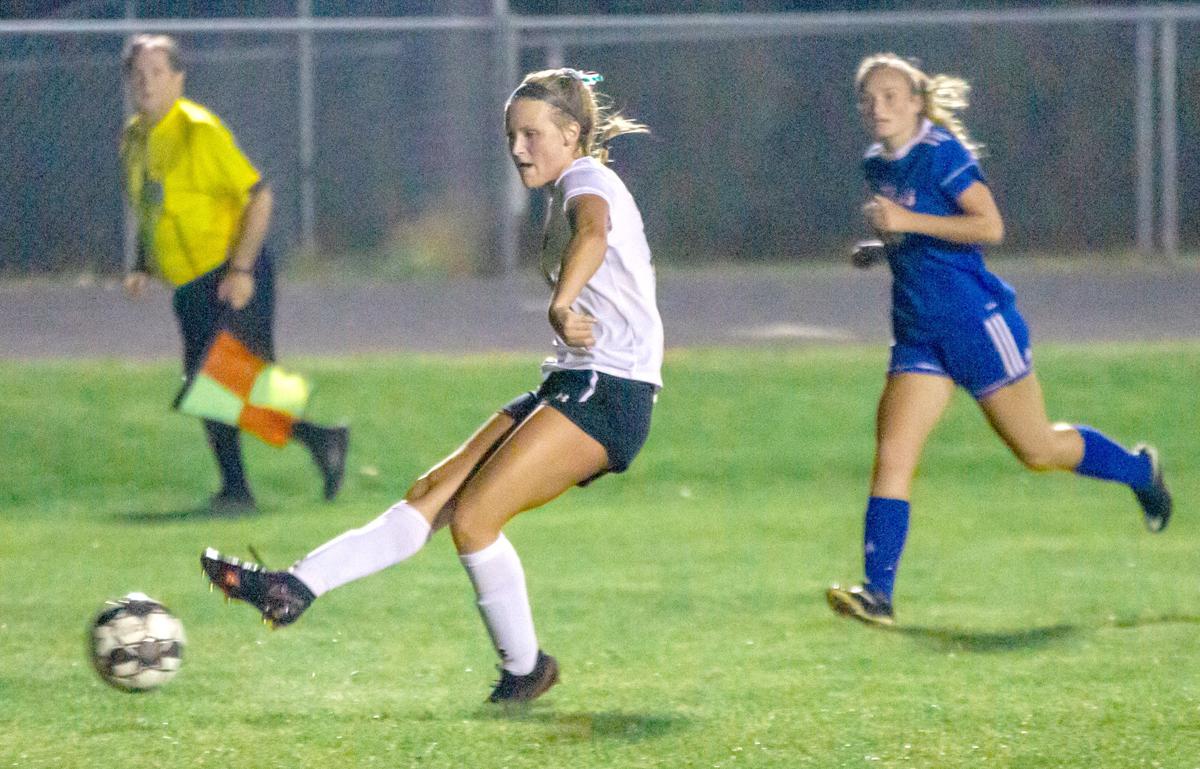 Holy Family Catholic freshman Brenna Westerhaus shoots and scores in the 89th minute in a 4-2 win over Watertown-Mayer Sept. 24. 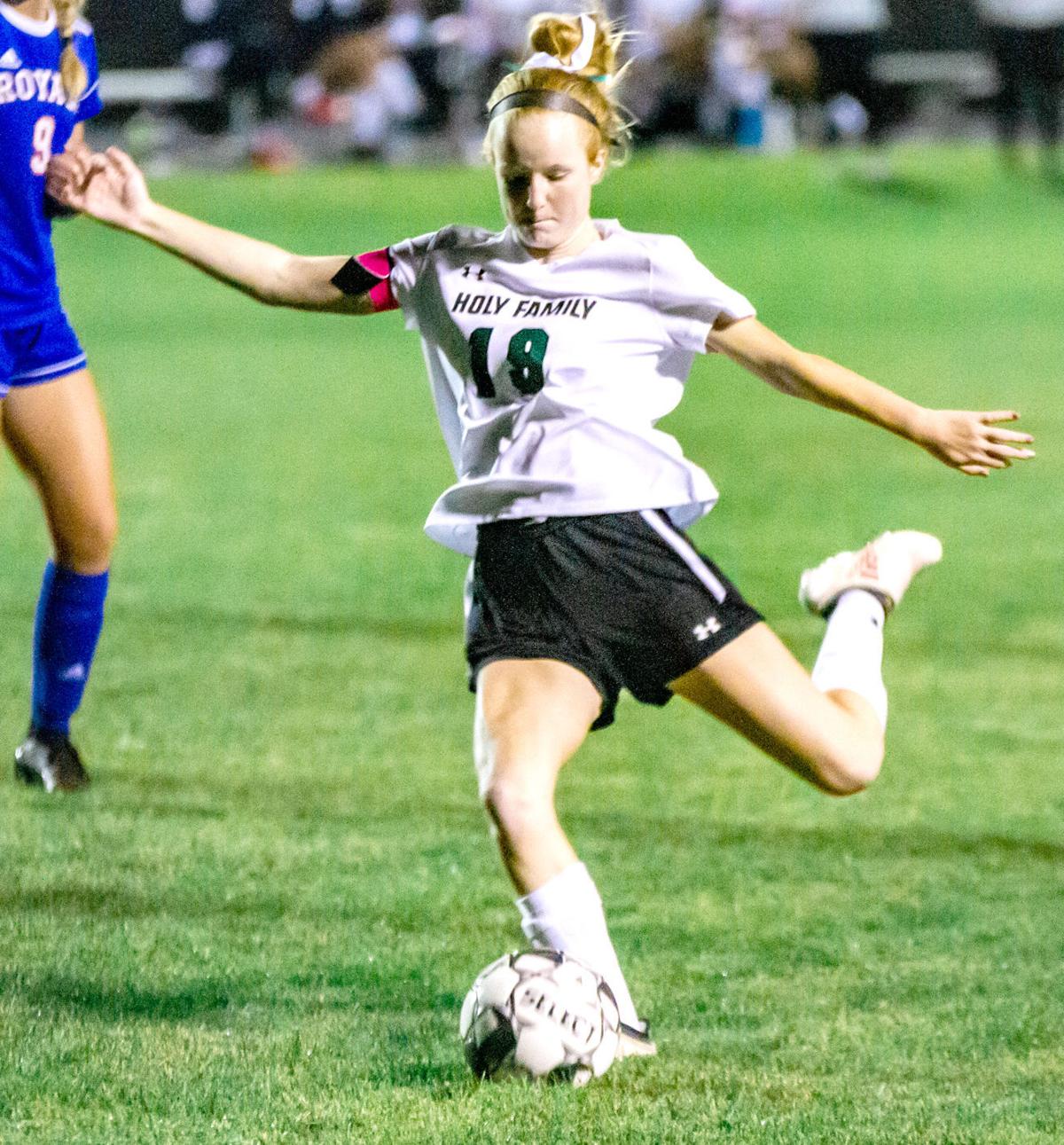 Holy Family Catholic players celebrate with freshman Brenna Westerhaus, who scored the go-ahead goal with under two minutes remaining in a victory over undefeated Watertown-Mayer Sept. 24.

Holy Family Catholic freshman Brenna Westerhaus shoots and scores in the 89th minute in a 4-2 win over Watertown-Mayer Sept. 24.

After Maeve Kelly evened the game at two with 15:28 to play on her second goal of the game, on a penalty kick, the Fire scored twice over the final two minutes to win 4-2.

Holy Family Catholic is now 4-2 in the Wright County Conference and 5-3 overall.

Freshman Brenna Westerhaus gave the Fire the go-ahead goal with 1:49 left in regulation.

Bella Hocevar made 10 saves for Holy Family Catholic, which trailed 1-0 and 2-1 on Royal goals from Eleanor Rundell and Megan Barnhart.

Kelly got Holy Family Catholic on the board early in the second half at the 42:10 mark. Mary Furlong netted the final goal with one second left.

Senior Ally Agerland won a hard-fought first singles match in three sets for the lone point in a 6-1 loss for Holy Family Catholic at Orono Sept. 24.

Agerland won the first set 6-4, lost the second 6-1 before scoring a super tie-breaker win in the third.

Agerland has just one loss on the season.

Running around the Victoria campus for the first time since 2003, the Holy Family Catholic cross country program got a victory in the boys varsity race from Jaden Lorenz.

A dual with Waconia, Lorenz won his third race of the season, a time of 17:07.5 in a dominating 55-second victory.