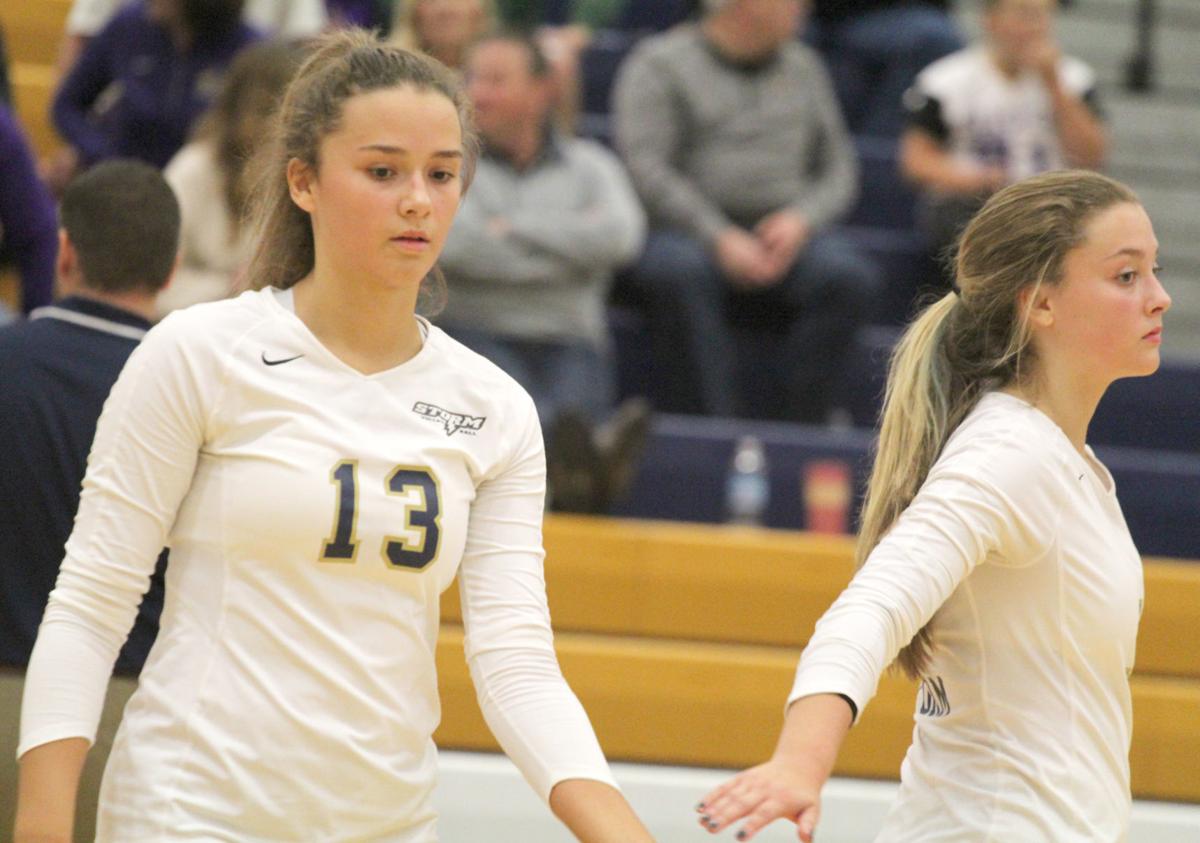 Katie Paine (13) and Hannah Paine before the start of the fifth game against rival Chaska Sept. 26. The Paines, fraternal twins, have been on teams together since the age of 12. 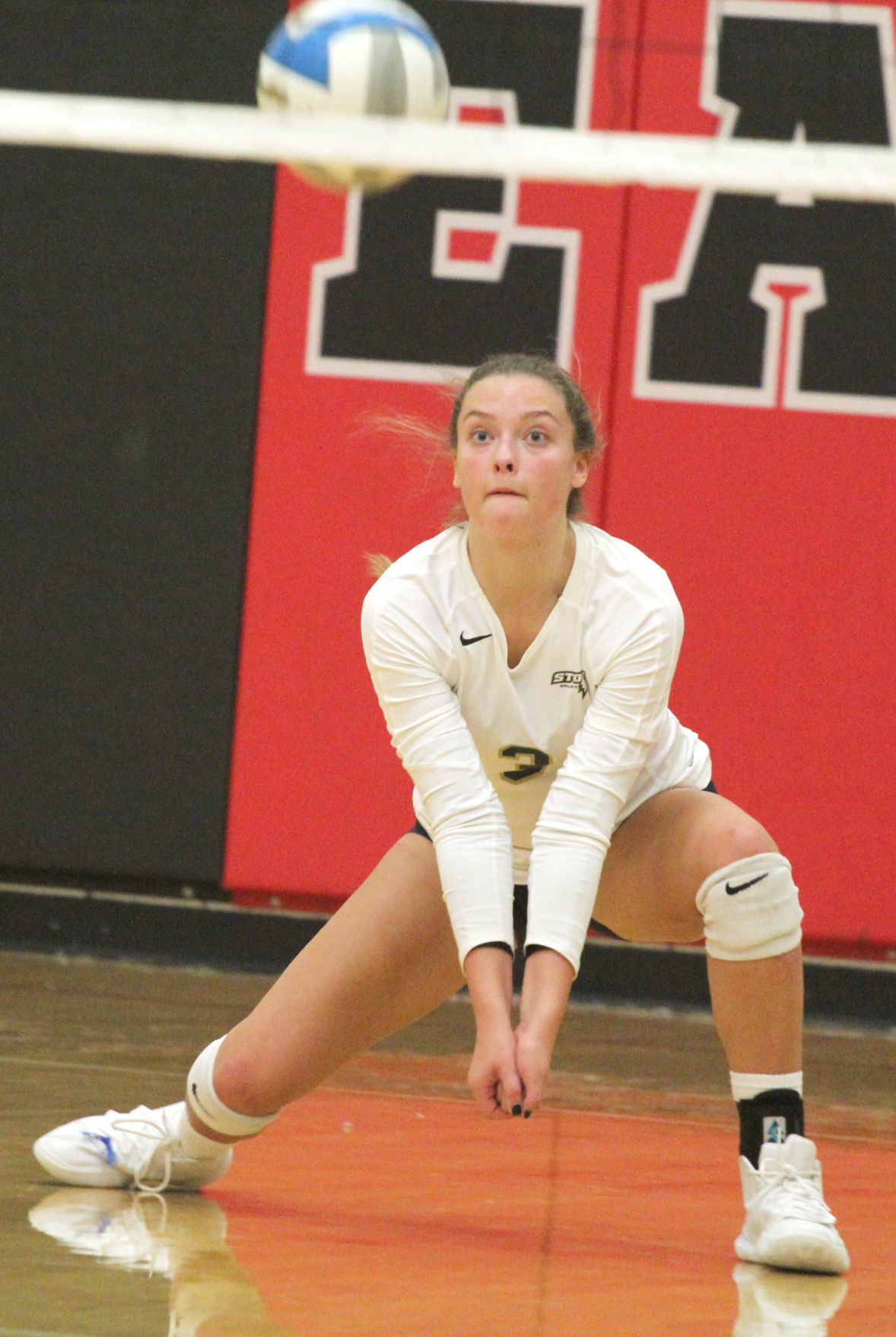 Hannah Paine has played at the net as hitter, at setter recently in a 6-2 offense, a defensive specialist, and libero in a recent match against Eden Prairie. 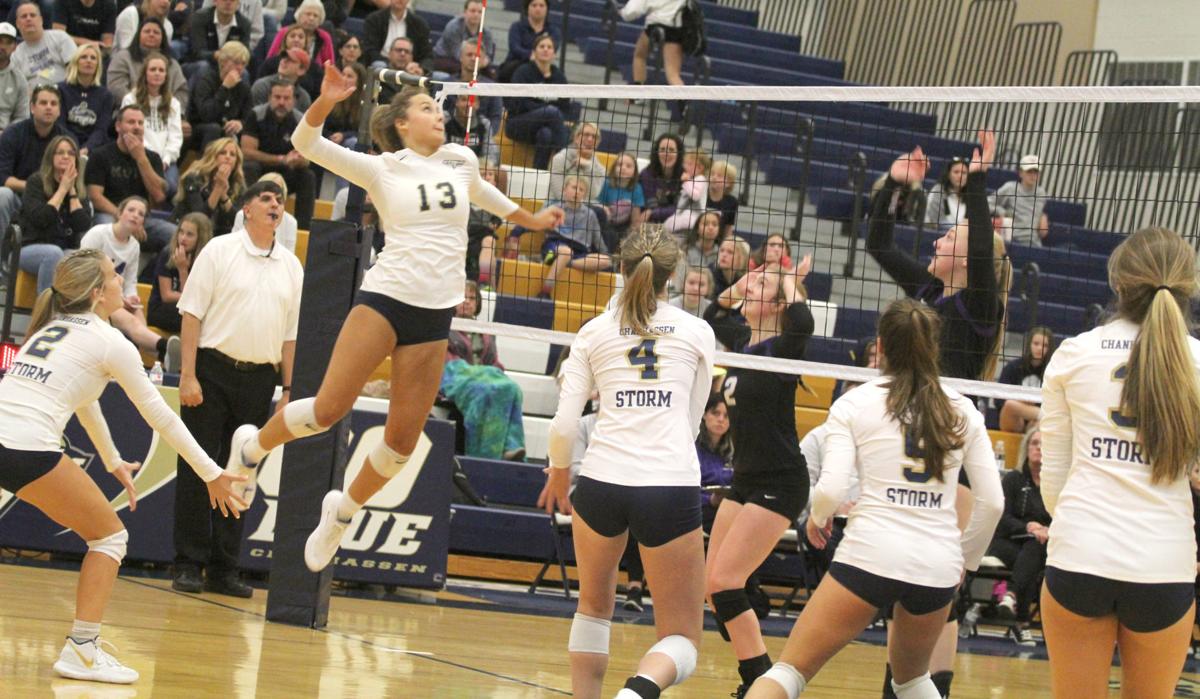 Katie Paine unloads on a swing for Chanhassen against Chaska Sept. 26. 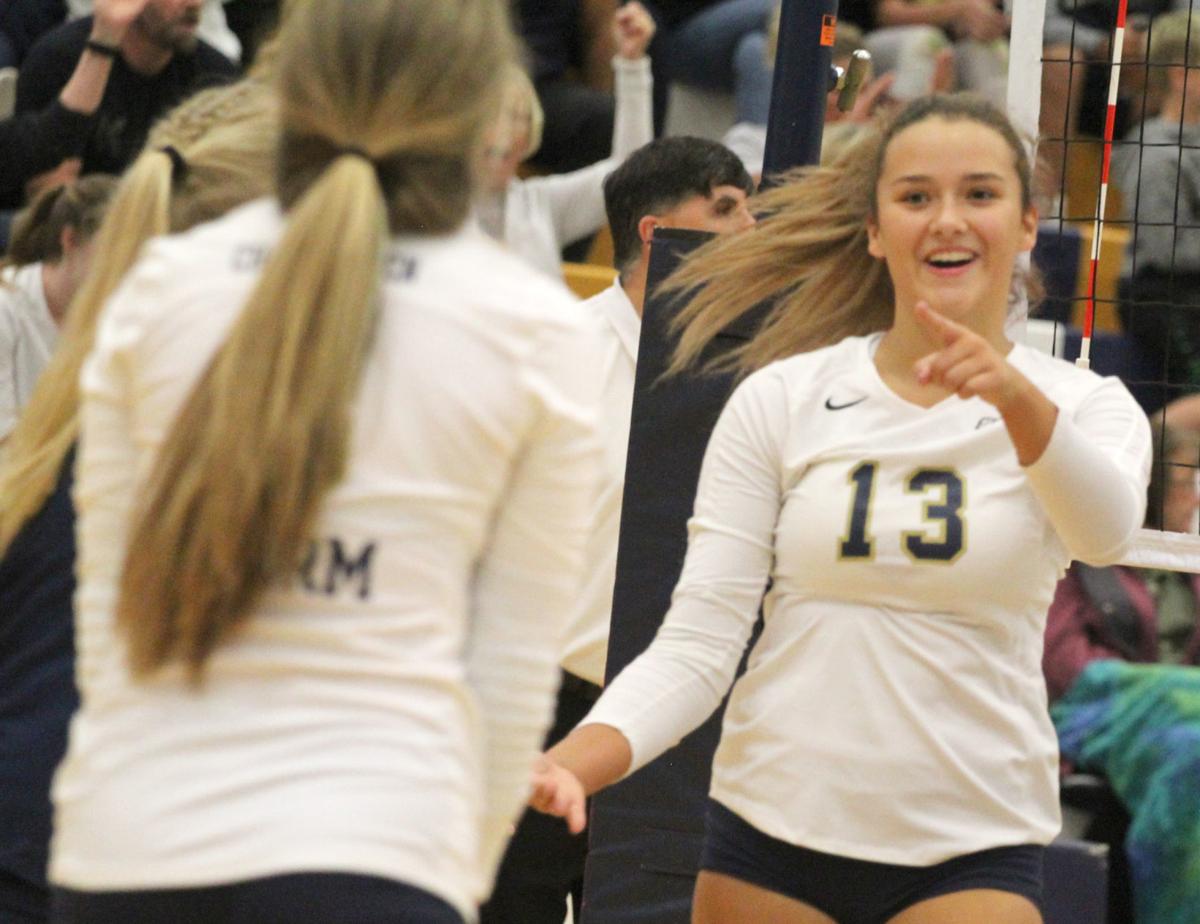 Katie Paine points to her sister Hannah after a set led to a kill for Chanhassen against Chaska. 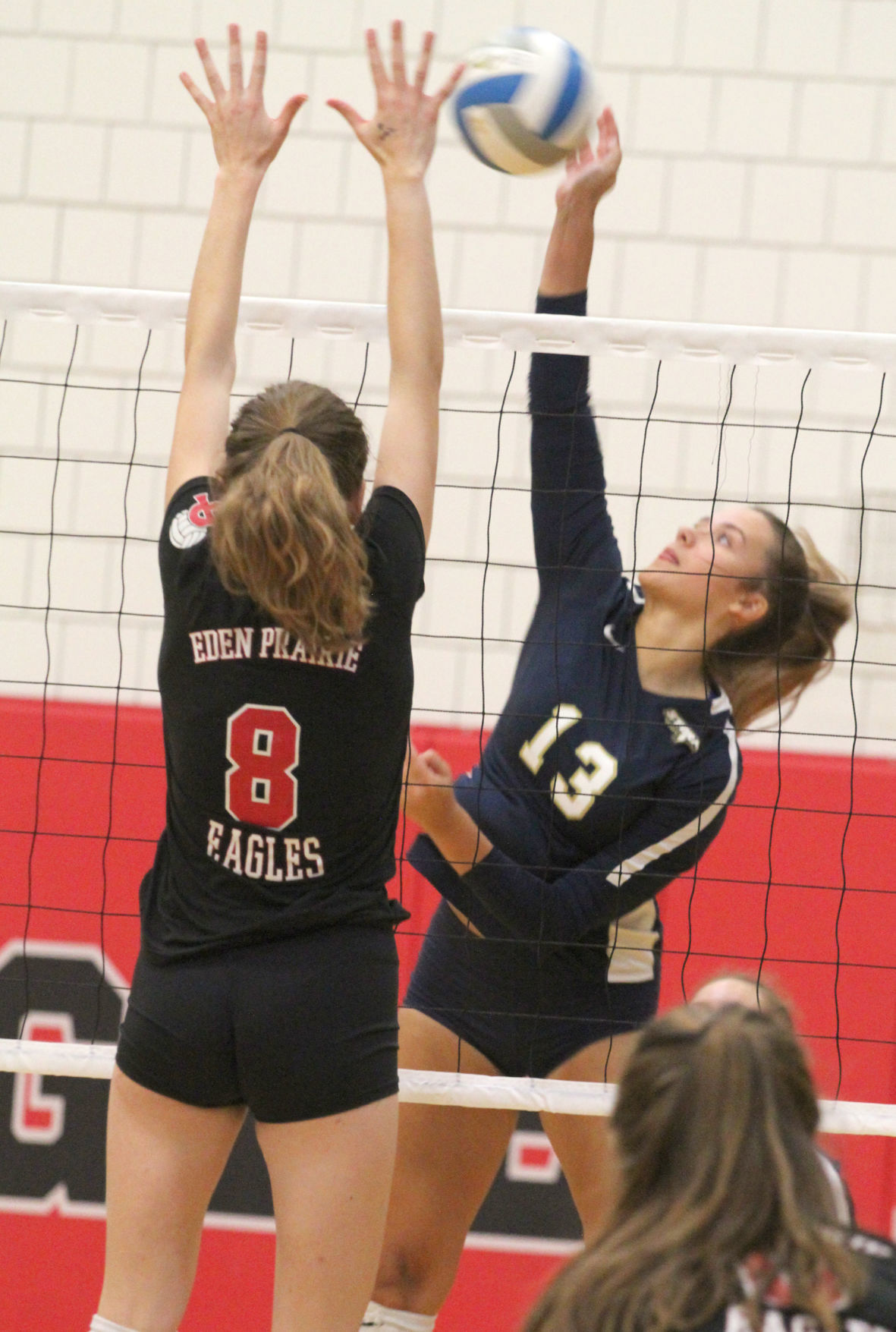 Katie Paine skies over the net for a swing for Chanhassen in a Oct. 1 match at Eden Prairie. Paine leads the Storm in hitting this season. 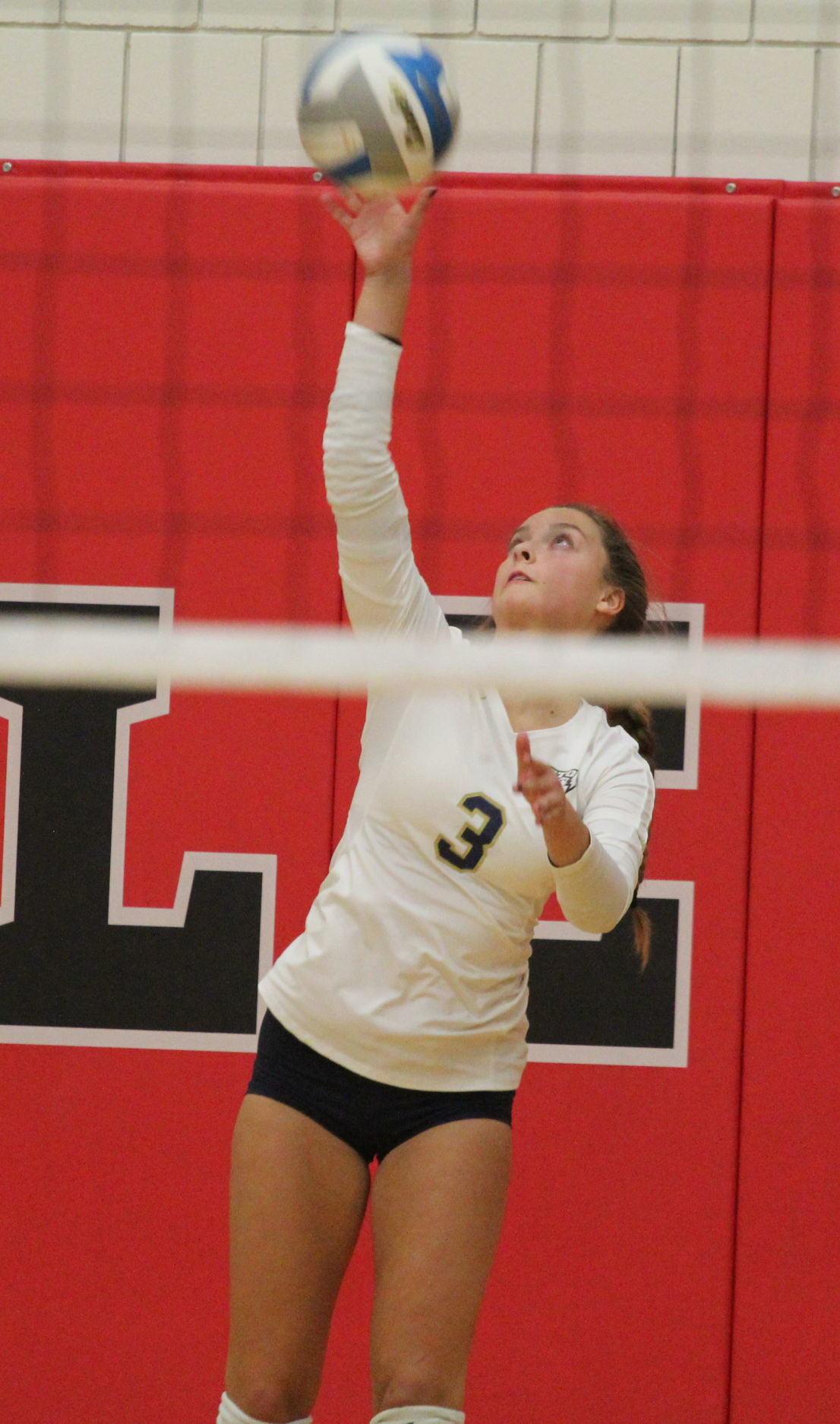 Hannah Paine on the serve for Chanhassen at Eden Prairie Oct. 1. 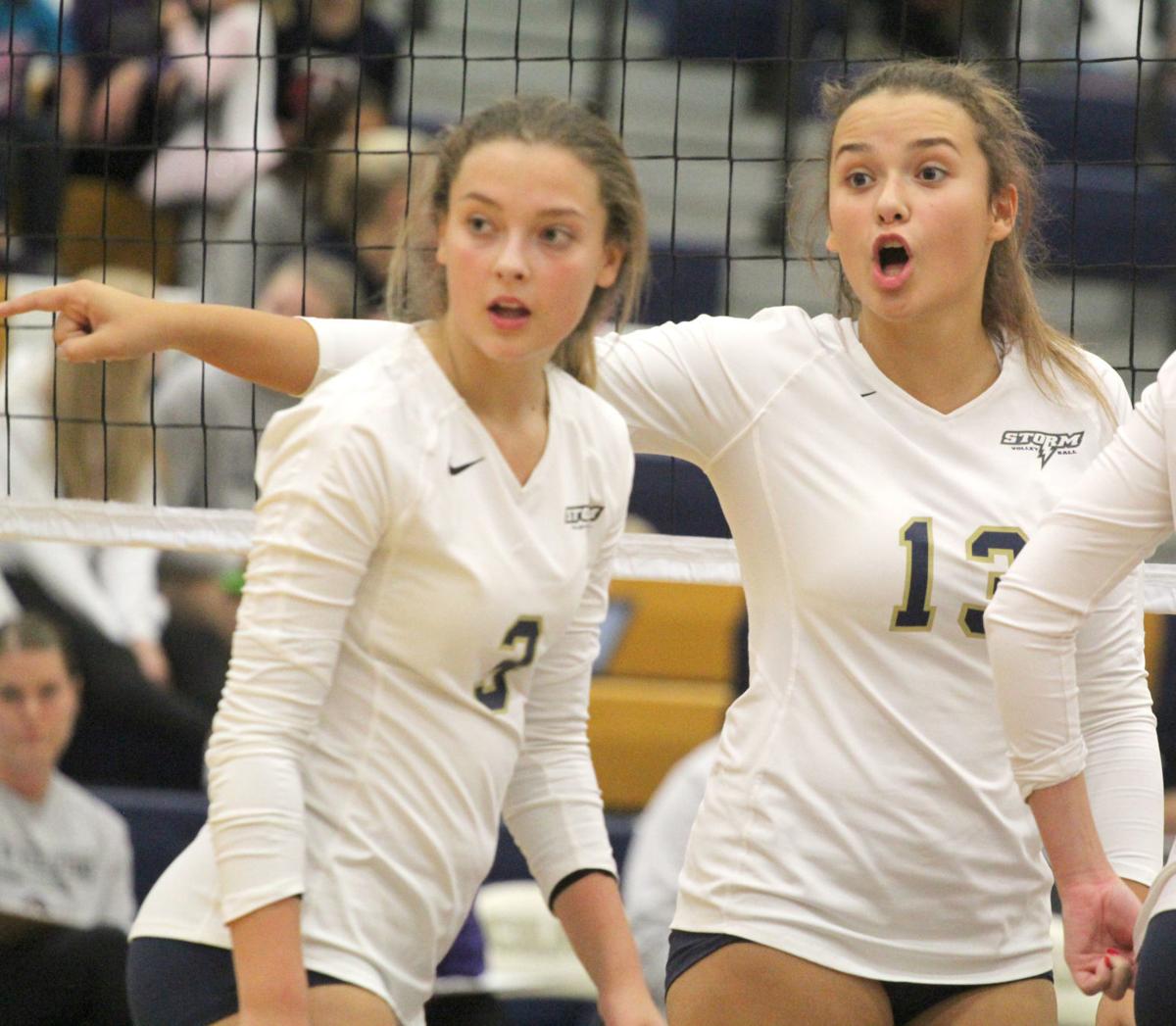 Katie Paine (13) and Hannah Paine before the start of the fifth game against rival Chaska Sept. 26. The Paines, fraternal twins, have been on teams together since the age of 12.

Hannah Paine has played at the net as hitter, at setter recently in a 6-2 offense, a defensive specialist, and libero in a recent match against Eden Prairie.

Katie Paine unloads on a swing for Chanhassen against Chaska Sept. 26.

Katie Paine points to her sister Hannah after a set led to a kill for Chanhassen against Chaska.

Katie Paine skies over the net for a swing for Chanhassen in a Oct. 1 match at Eden Prairie. Paine leads the Storm in hitting this season.

Hannah Paine on the serve for Chanhassen at Eden Prairie Oct. 1.

Fraternal twins, Chanhassen volleyball players Katie and Hannah Paine differ in personalities. Hannah is like her mom, Sandi, while Katie is like her dad, Tim.

Their physical resemblance tracks that as well. Their parents used to refer to them as "mini-me's."

On the volleyball court, Katie is more of a "I'm A Swing It," the Storm's top offensive option with 203 kills, 24 aces and 146 digs. Hannah is more of a "On Point" with her passing skill with 175 digs and recently as a setter.

While their positions on the floor differ, Katie and Hannah can agree on "Jump Around." They are the House of Paine.

"She likes to use that over me," said Katie of Hannah attempting to use her one-minute earlier birth as a power move.

They are not always so different. Both share the same passion, the same drive of doing whatever it takes for their volleyball team.

Hannah started her senior season filling in on the right side of the attack. After settling into her defensive specialist for a while, Coach Teryn Glenn switched things up recently, running a 6-2 offense with Hannah joining Annabelle Nordmeyer at setter.

That lasted all of two matches as Hannah was needed at libero with Madison Ellman out for the Eden Prairie match Oct. 1.

All that's left is middle blocker.

"It's fun. I like to be able to plug in everywhere. It's nice to have the experience in case someone gets hurt, if we're missing someone, I can go in and just do it and it's not that big of a difference," Hannah said.

"It's nice to have a player like that on your team," Katie added.

Katie's love comes in letting a big swing rip. She totaled 277 kills as a junior and is one pace to eclipse that mark with 203 in 18 matches. Katie had a career-high 29 kills on 59 swings in a recent match with Chaska.

"That's what I do best," said Katie of hitting. "It's an amazing feeling."

Originally born in Montana, first there was a move to Nebraska before settling in Minnesota. Volleyball always the sport of choice for Katie, Hannah came around while at St. Hubert's in Chanhassen.

With the school soccer team dissolving for her age group, Hannah joined Katie on the court. No introduction was really needed. She was ready.

"I said, might as well switch and try it and I've loved it ever since," Hannah said.

"She was pretty quick to learn. I didn't know much at the first place," Katie admitted.

The sisters played for former Chanhassen varsity head coach Mike Domeier at 12s along with current teammate Kate Hamburg in 2014. Ever since, high school or club, where one Paine, the other has been, too.

That's made it much easier on mom and dad.

"We talk about stuff at home, but we're teammates on the court and sisters off the court," Katie said.

"I kind of forget about it a lot. I'm so used to having (her) as a teammate -- we've had the same teammates throughout the years -- she's almost like another person that's been on my team," Hannah said.

Yet exists the common connection between siblings. No words are needed. There's always this mutual feeling of "I got you." That was certainly on display against Chaska Sept. 26. The unspoken gestures. The smile of approval.

Game four on the line, Chanhassen looking to extend the match leading 28-27, Hannah knew who go to. Four straight times setting up Katie; the final pass going for game-point.

FORK IN THE ROAD

The Storm also play in a two-day tournament at St. Michael-Albertville on Oct. 11-12.

When it's all said-and-done, it will represent the final time Hannah and Katie will suit up together at Chanhassen.

Katie is headed to Division II William Jewell College in Missouri. Hannah is heading farther south to play volleyball at the University of Texas in Dallas, a Division III program.

"I just take every day at a time with Hannah. Soak it all up. Even if I get irritated, I'm not going to have her next year, so I got to do it right with her," Katie said.

"Living in the moment. Not having her next year is going to be a big change. I've had her since we were little," Hannah said.

"It's going to be different," Katie said.

"It's going to be an adjustment," Hannah said.

The Paines, independent, yet when together a seamless pair.

The Storm were never able to score in bunches, the Eagles pulling away in each of the three games.

Chloe Rogers added two serving aces with Katie Paine and Ziembiec also in double digits in digs with 14 and 12.

Chanhassen players and coaches circled on the court for five minutes after the match to talk about where to go from here, an 8-10 record.

"I think just playing every game the same. It's a new game, don't think about the past, think about this game right now. It's the same opponent on every side," Storm senior Katie Paine said.

"It's a mental game. I feel like we all have the skills to do our jobs and do what's needed to get the job done. It's all up here," said Hannah Paine, also a senior, pointing to her head.