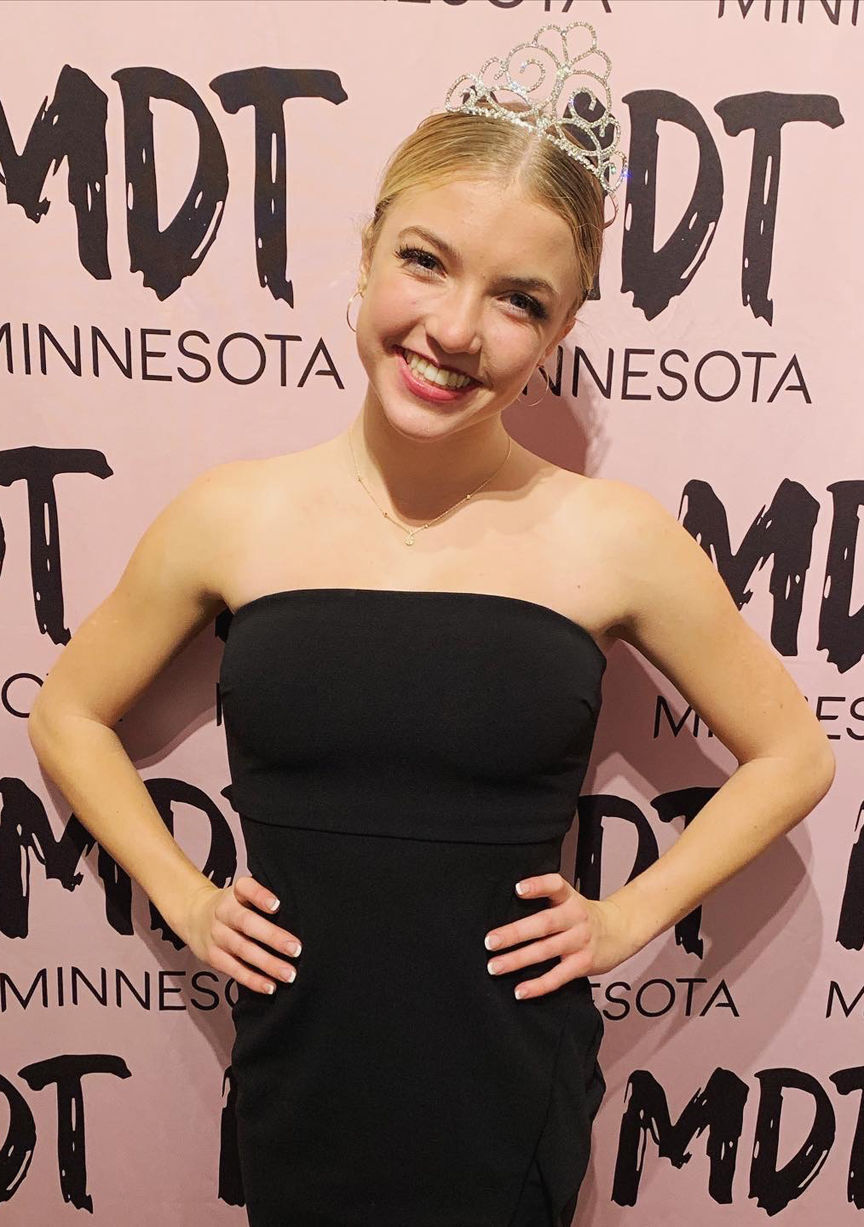 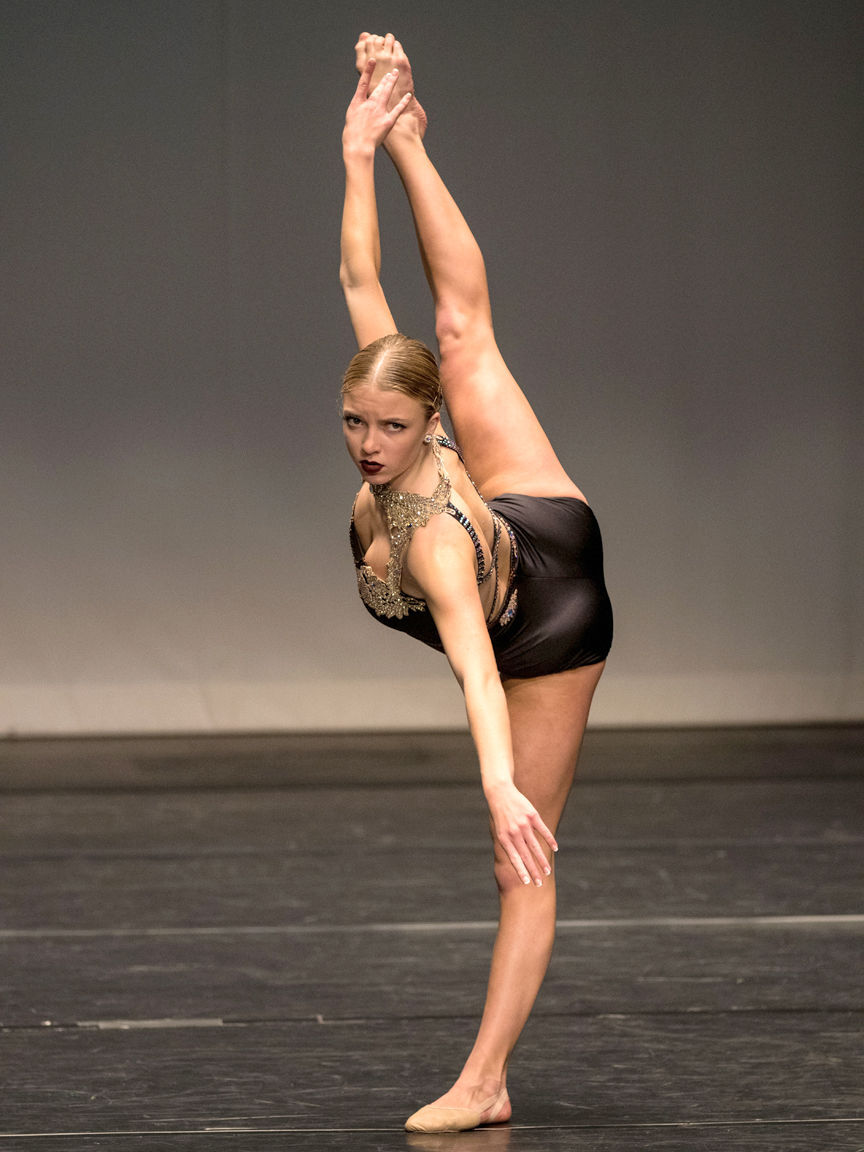 Chanhassen High School senior Jordan Fasching earned the title of Miss Dance Team Minnesota champion on Oct. 25 in Burnsville. Runner-up twice in 2016 and 2019 in the middle school and 11th grade divisions, Fasching came out on top in 2020.

Chanhassen High School senior Jordan Fasching earned the title of Miss Dance Team Minnesota champion on Oct. 25 in Burnsville. Runner-up twice in 2016 and 2019 in the middle school and 11th grade divisions, Fasching came out on top in 2020.

Jordan Fasching's father always tells her to just have fun. So, competing in her fifth consecutive Miss Dance Team Minnesota competition on Oct. 25, the Chanhassen High School senior did just that.

Fasching felt the adrenaline rush of having the stage at Ames Center in Burnsville to herself.

In a year in which so much was canceled, having the opportunity to compete, that in itself was a win.

"I've always dreamed of competing for the title for Miss Dance Minnesota. I was really nervous it wouldn't happen. I'm really appreciative of the work Jenny Raiche and all the people at Ames Center did to make it happen," Fasching said.

Fasching walked off the stage feeling proud. Her dance, choreographed by older sister, Cayman, was upbeat with strong pace.

"My song was 'Who Are You.' I tried to surprise people; to show everyone how much I have grown over the years. Really, I wanted to go out there and say it doesn't matter where you come from, how big your program is, you can succeed," Fasching said.

Walking out the performance doors, Fasching found her sister waiting. Tears in her eyes.

"She's the reason I started. She's been my biggest supporter ever since. It didn't matter how I placed after that moment," Fasching said.

After being so close to winning grade-level championships in eighth and 11th grade, in the top few all four previous years, when all 33 senior dancers were brought back on stage, Fasching was named the champion.

"It's very exciting that's for sure. It was shock. It still is," Fasching said. "It brings together many of Minnesota's greatest dancers from all across the state. For me, competing since eighth grade, it's always one of my favorite competitions of the year. I fell in love with it from the start."

"Jordan is one of the most driven and accomplished, yet humble athletes I’ve ever had the pleasure of working with. She is extremely self-disciplined, so when she sets a goal for herself, it isn’t a matter of if it will happen, but when," coach Ali Morrissey, director of VELOCITY Dance and Theater, said. "She’s worked incredibly hard, with no lack of enthusiasm in sight, to achieve her goals of making the University of Minnesota dance team, and taking the Miss Dance Team Minnesota title. No one is more deserving!"

In addition to a solo dance, worth 70 percent of the overall score, all senior Miss Dance Team participants were judged on a modeling of technical skills as well as interview portion. This year's question, answered virtually, asked dancers with everything that has happened in 2020, what does it mean to compete at this event?

"Growing up and knowing these girls, some of them I have traveled with to compete as Team Minnesota. They are some of my best friends. It is a select group that are chosen to compete in Miss Dance Team USA and I am so happy and proud to represent them," Fasching said.

Fasching has always been following in the footsteps of Cayman, a former captain of the Chanhassen Dance Team and dancer at the University of Minnesota-Duluth.

Morrissey, who like Cayman is an assistant coach in the Chaska High School dance program, has been working with Jordan for nearly a decade. When Morrissey opened VELOCITY in Chanhassen in 2014, Fasching followed.

Fasching figures she spends around 20 hours a week at the studio. Recently, though, all practices are back to virtual.

"It's been tough getting used to Zoom practices again. Even just wearing your mask when you're dancing in-person. It's really hard to not be able to run up to your teammates and give them a hug. Those personal connections you make with your teammates are what makes it so special," Fasching said.

While Fasching does not compete for the Chanhassen High School winter dance team, she has been a part of the fall performance team, appearing at football games and in years past working with youth dancers throughout the communities.

"It was a really tough decision. I really wanted to do it, but it came down to how committed I could be," said Fasching of not competing for the Storm Dance Team. "Studio has always been my love."

If winning the Miss Dance Team competition wasn't enough of a dream come true, Nov. 16 brought another day of joy that will last for the next four years.

After sending in an audition tape and participating in a virtual interview to apply for the University of Minnesota dance team, it was the waiting game for Fasching.

"We were practicing at the studio and I look over and I see the Minnesota coaches come through the door. I just thought, maybe they're coming to watch. Then I see my parents come in behind them, wearing Gopher gear, and I couldn't believe it," Fasching said.

The coaches opened up a folder with an offer to become a Gopher.

"It was very exciting, unexpected as well. I was checking my e-mail every few hours, hoping to receive an offer. My studio helped set-up the visit with the Minnesota coaches. It's something I'll never forget. (The U of M team) inspired me when I was young and I am excited to be able to be a part of that next year."

Fasching said she's excited about the next chapter, competing for one of the best collegiate dance teams in the country, but first things first, there's senior year to finish out and enjoy.

While everything looks different, her senior year is turning out to be the best year yet.