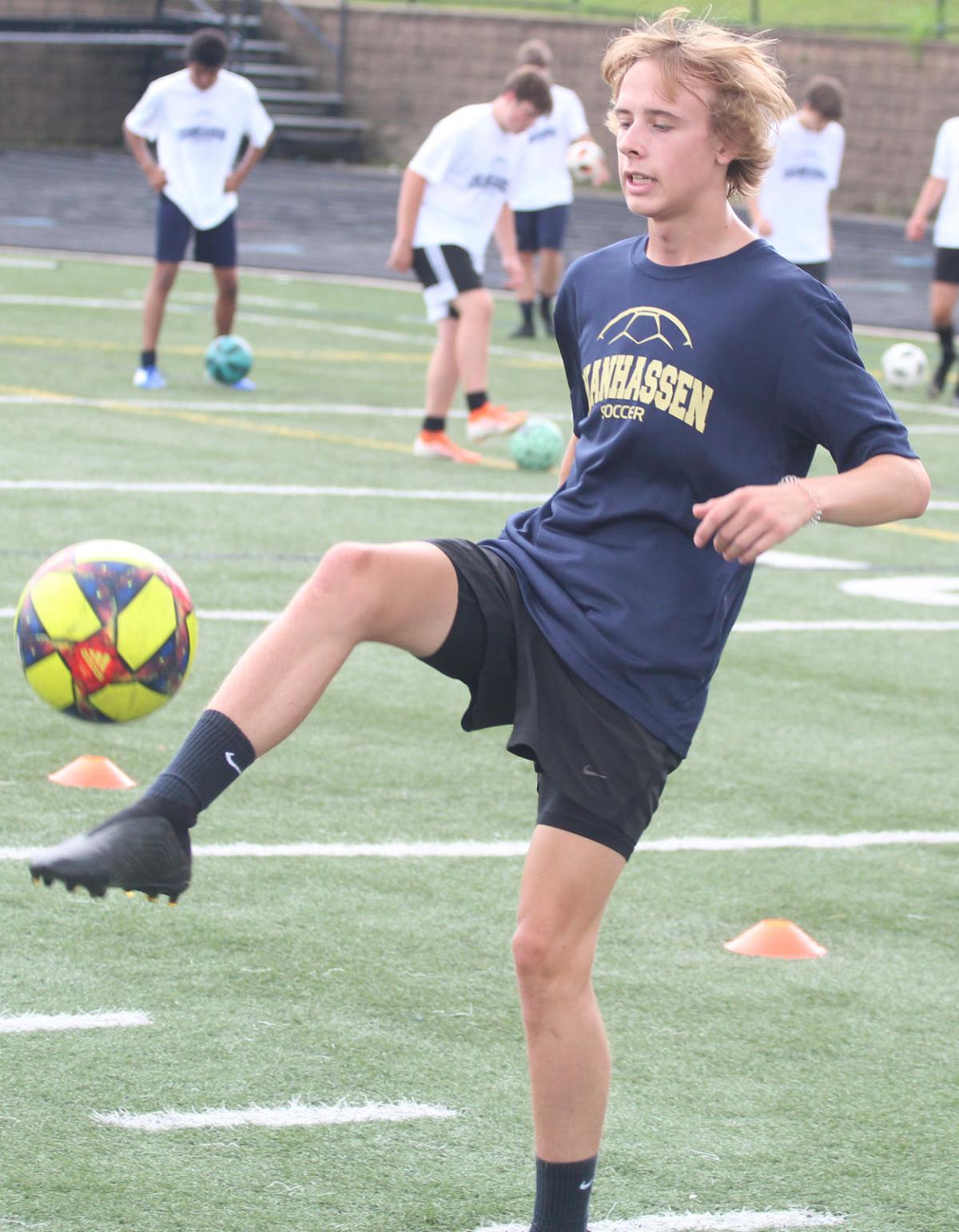 Braeden Sanders, pictured on day one of tryouts in 2019, was one of two junior captains for Chanhassen last season. The Storm will play 11 games this fall, all against Metro West Conference competition. 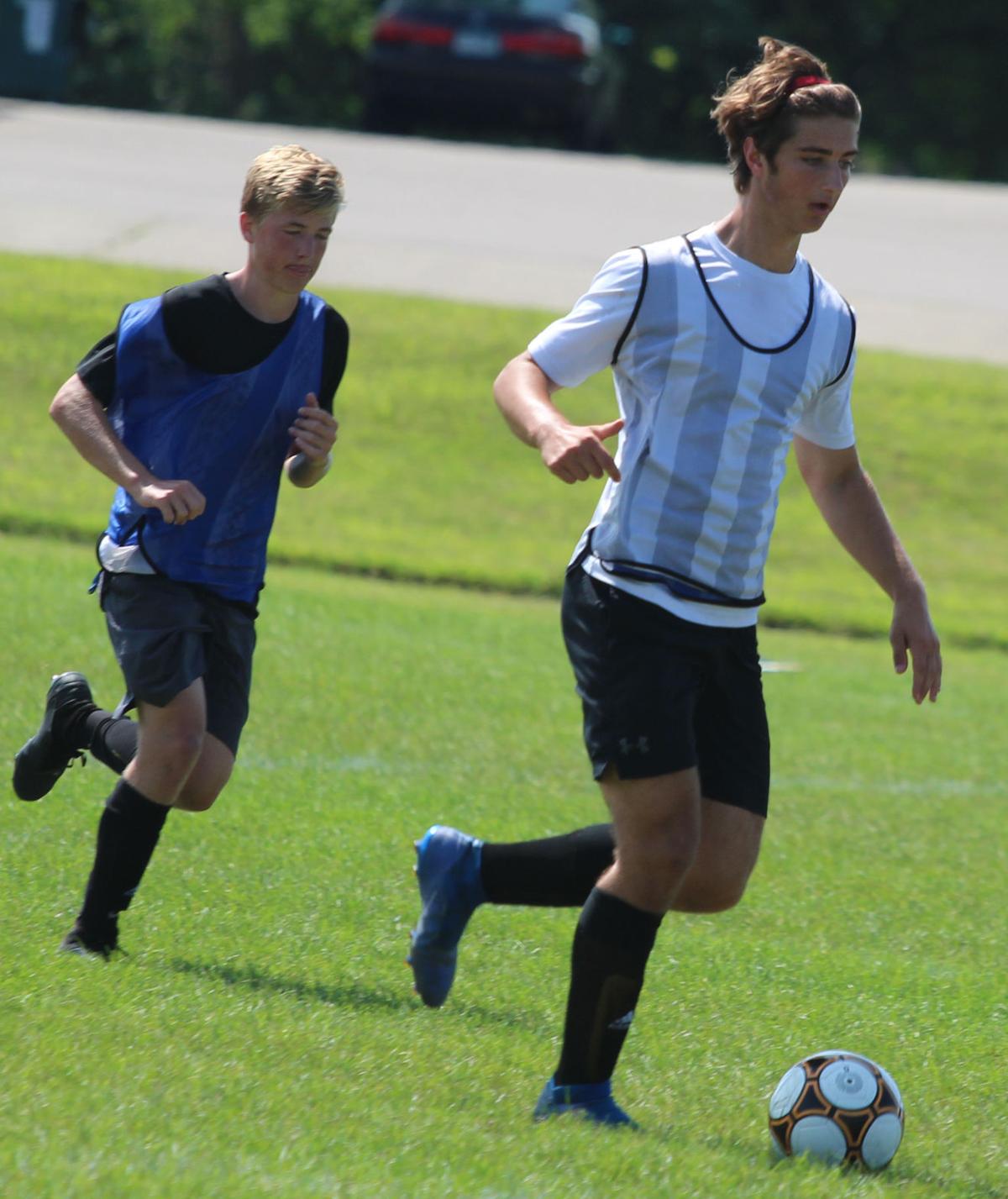 Kyler Kamis, pictured at tryouts for the Chaska boys soccer team in 2019, is in his fourth year on varsity for Chaska on the defensive back line. The Hawks soccer teams will play 11 games, all against Metro West Conference opponents.

Braeden Sanders, pictured on day one of tryouts in 2019, was one of two junior captains for Chanhassen last season. The Storm will play 11 games this fall, all against Metro West Conference competition.

Kyler Kamis, pictured at tryouts for the Chaska boys soccer team in 2019, is in his fourth year on varsity for Chaska on the defensive back line. The Hawks soccer teams will play 11 games, all against Metro West Conference opponents.

Football and volleyball are now "third season" sports. Cross country meets can only feature two or three schools. Girls swimming and diving meets are only duals. Soccer and tennis teams will have a reduction of contests by 30 percent and can only play local teams.

Welcome to Fall 2020 in the Minnesota State High School League.

"Our Board of Directors recognizes the importance of the League’s activities in supporting the mental and physical well-being of our students and worked very hard to provide some level of participation in all activities. In addition, they recognize their responsibility in focusing on the health and safety of all who participate in or support these opportunities," said Erich Martens, MSHSL Executive Director.

The MSHSL weighed many options in its Return to Participation meeting Aug. 4, discussing each sport individually, rather than making one blanket decision.

While high-risk sport football and medium-risk sport volleyball were moved to a new hybrid third season, starting in March and running into May, boys and girls cross country, girls tennis, girls swimming and diving, and boys and girls soccer were given the green light with modifications.

There are limitations on numbers of matches each team can participate in each week. Who a school can play. When they can start the season -- captain's practices were eliminated this season.

As of now, no decision has been made whether section or state tournaments will be held.

"The start dates for season three (football and volleyball) and the fourth season (traditional spring sports) have not yet been determined," said Prior Lake Athletic Director Russ Reetz, a league board member. "It was a very difficult day. The return to play process was a winding road with many twists and turns."

Minnesota Governor Tim Walz’s Executive Order 20-82 declaring that the return to learning would be a localized decision aligning with the current statistical situation and mitigation measures available in each district, along with the Minnesota Department of Health’s Guidance for Youth Sports along with the National Federation of High Schools Return to Sports document, were large factors in each sport's outcome.

In approving the changes, the Board of Directors used information and frameworks provided by the Return to Participation Task Force in an earlier meeting. These frameworks were grounded in the following guiding principles:

The board also voted to allow spring teams to practice together this fall, as well as football and volleyball squads. Spring sports were canceled earlier this year due to the pandemic.

"I was going through the various scenarios over the past couple of weeks, and this exact model was not what I thought would be the final decision," Jordan Athletic Director Joe Perkl said. "However, seeing it I do believe it is our best option at this time."

Football will have a 12-week season with six games. Game dates are not locked in yet. But there will be no scrimmages, all games will be local and playoffs and state play are to be determined.

Minnesota is the ninth state to delay its high school football season.

The league did vote on the football and volleyball seasons to start in the fall as scheduled, but both motions failed. Football was voted down in a 12-6 vote. The first volleyball vote was 9-9, but after more discussion it failed 11-7.

First-day reactions on social media site Twitter were harsh. Disappointment of sports being moved. Questions on why baseball and softball were pushed back to May through July 2021 rather than played this fall.

Second-day reactions were more positive as some athletes took the news as an opportunity to try a new sport.

Darin Keizer, Athletic Director at Southwest Christian High School, said numbers are up across the board in fall sports, including 46 girls signed up for tennis.

Keizer, and athletic directors around the state, have been busy adjusting schedules for fall sports. The Metro West Conference is sticking to all league events in soccer and tennis with Chaska and Chanhassen playing the other five schools -- Bloomington Jefferson and Kennedy, Benilde-St. Margaret, St. Louis Park, and Robbinsdale Cooper -- twice, with one match-up against the district rivals.

Girls swimming and diving teams will compete against Metro West Conference opponents one time like normal. What to do with cross country schedules remains up in the air.

The District 112 leadership team, along with our colleagues in the Metro West Conference will be working on what, if any fans, that will allowed to spectate in-person at all levels of competition this fall season. This will differ based on the sport being indoor versus outdoor, per guidance from Minnesota Department of Education.

The Wright County Conference is playing within league as well. Holy Family Catholic soccer teams will have just one or two non-league match-ups to fill out the schedule.

For Southwest Christian, independents in boys soccer, and a member of the Minnesota Christian Athletic Association in girls soccer, there is some retooling yet to be done on what the schedules will look like.

"The guidance from the Minnesota State High School League is play within your conference, play teams you're familiar with. What is local for our boys team? We've pretty much played teams from all around the metro. Teams from the IMAC, the Wright County," Keizer said.

MSHSL has set the first week of practice, Aug. 17-21, with a focus on implementing effective protocols and routines for pre-participation screenings, effective social distancing, compliance with all health recommendations, establishment of pod limits of 25 or less, and additional actions that mitigate the spread of disease and enhance safety of students and coaches.

Athletic programs must follow the identified protocols for students or coaches who have tested positive, are experiencing symptoms consistent with a COVID-19 diagnosis, or have had exposure to an individual who has been diagnosed with COVID-19.

Keizer said this school year will be all about dealing with change.

"You look at what's happening in Major League Baseball. What if a team has an outbreak? Do we find another team to play? Do we just leave that date open? I suspect ADs will be having to make adjustments all fall," Keizer said.

For schools that are required by localized metrics to be in a distance learning mode, practices are limited to virtual contact only.

At Minnetonka High School, where students in grades 9-12 will be virtual for four days per week, because of the one day per week MAST on Wednesdays, sports will continue in-person.

During the registration process for fall sports, a new step was added for parents/guardians to sign a 'COVID Waiver, Release, and Agreement for Participation' and a 'Extracurricular Activity Transportation Waiver and Release.'

Additionally, Return to Participation for Adapted Soccer will be addressed through collaborative planning with the Minnesota Adapted Athletics Association and the MSHSL.

Dual Meets only (no invites or tournaments)

Dual Meets only (no invites)

Dual or Tri meets only (no invites)