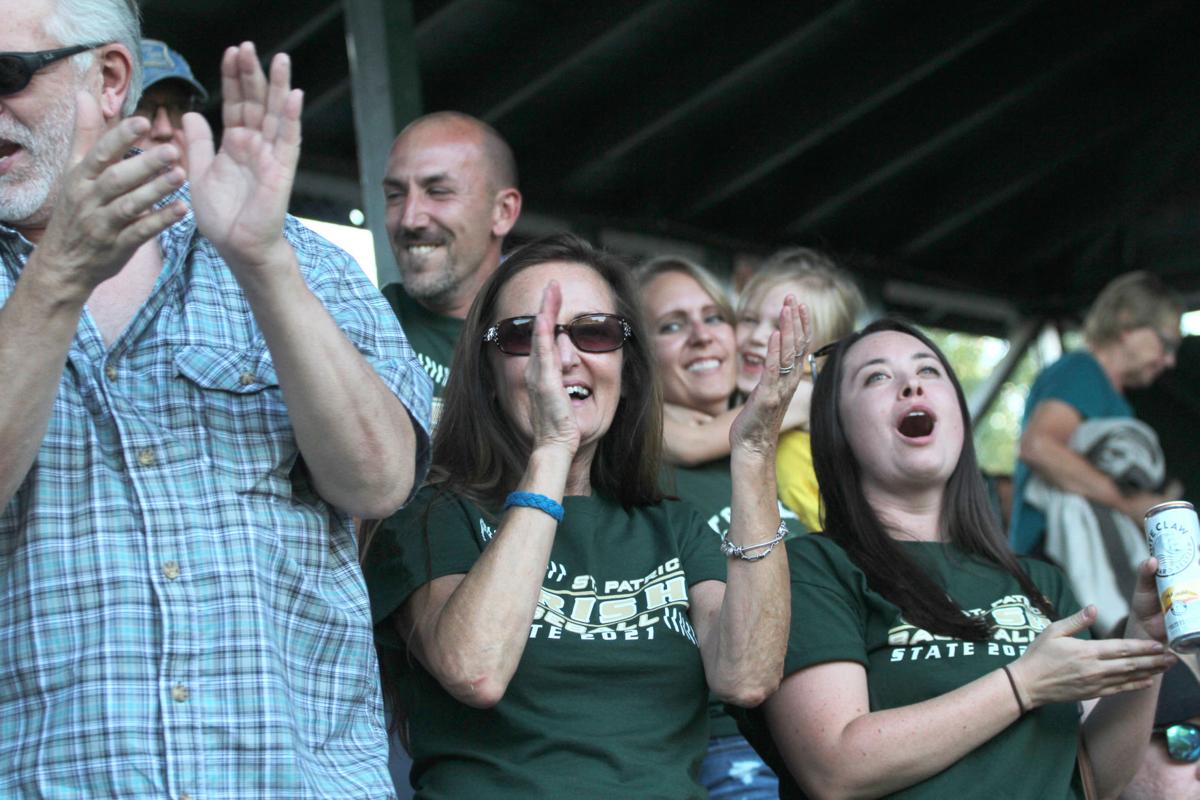 St. Patrick fans celebrate a come-from-behind win over Young America on Sept. 4 in the third round of the Class C State Amateur Baseball Tournament at Athletic Park in Chaska. An estimated 1,500 or so fans were in the park for the final pitch. 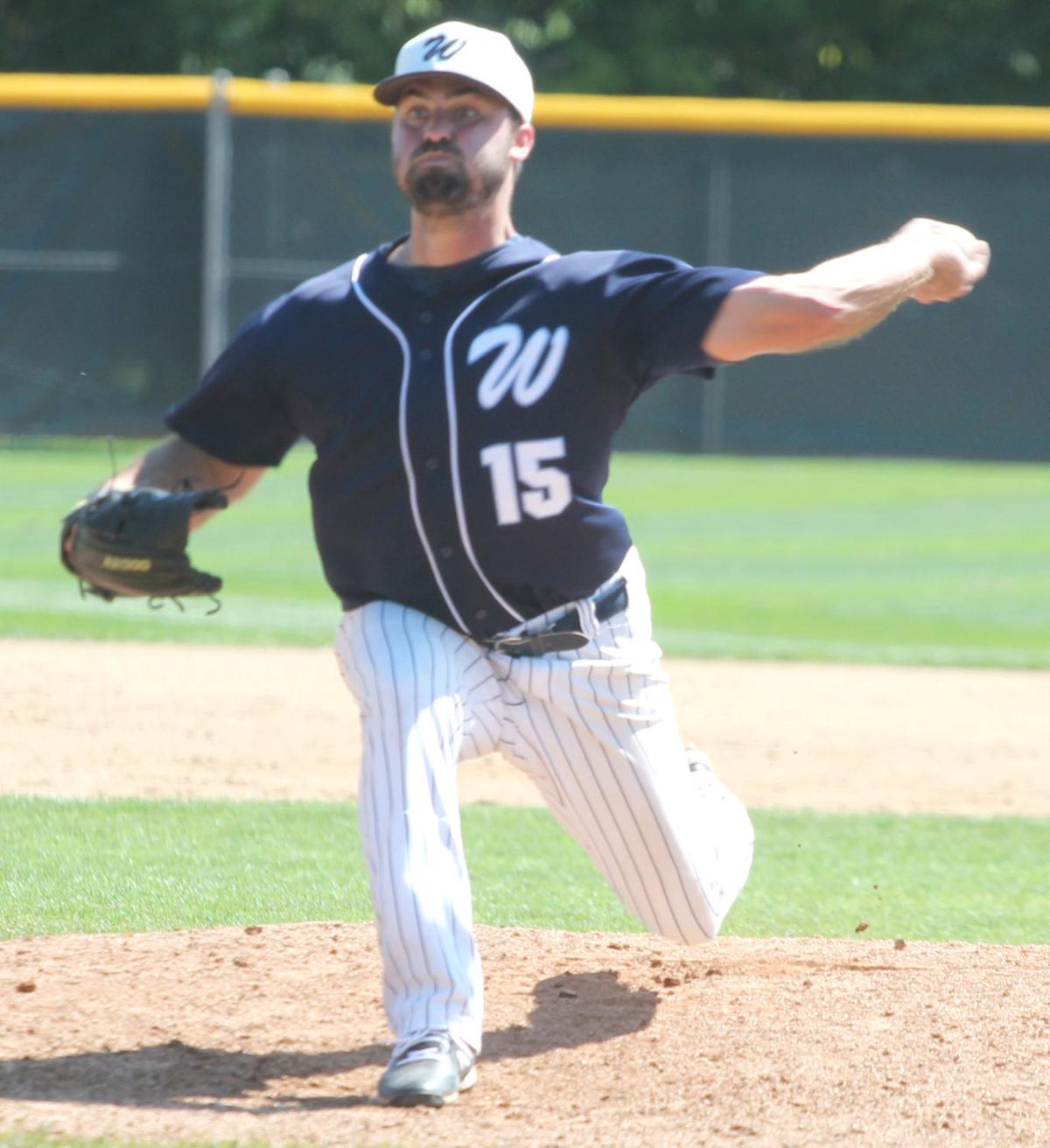 Matt Geislinger, after striking out nine batters in a second weekend shutout for Watkins, threw a no-hitter with 15 strikeouts in a 3-0 win over St. Martin on Sept. 4 in Chaska. 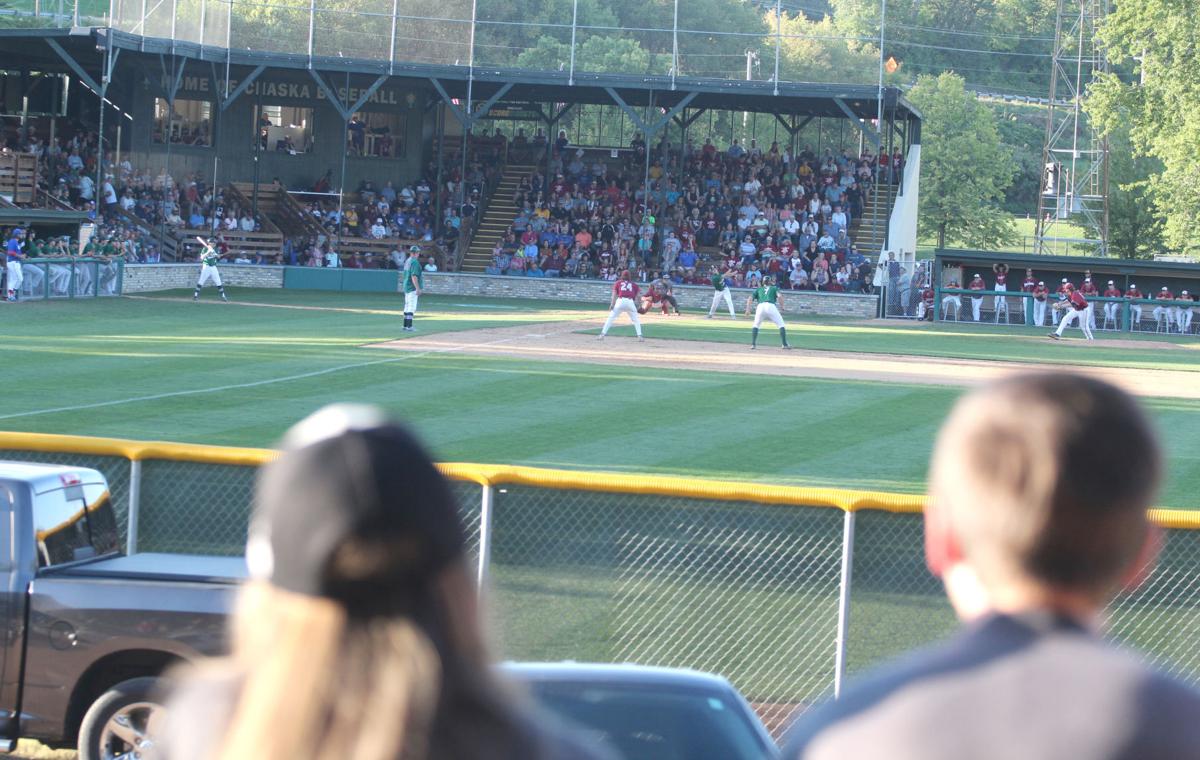 Fans flocked to Athletic Park in Chaska for a match-up between Young America and St. Patrick, an estimated 1,500 spectators in the park on Sept. 4. 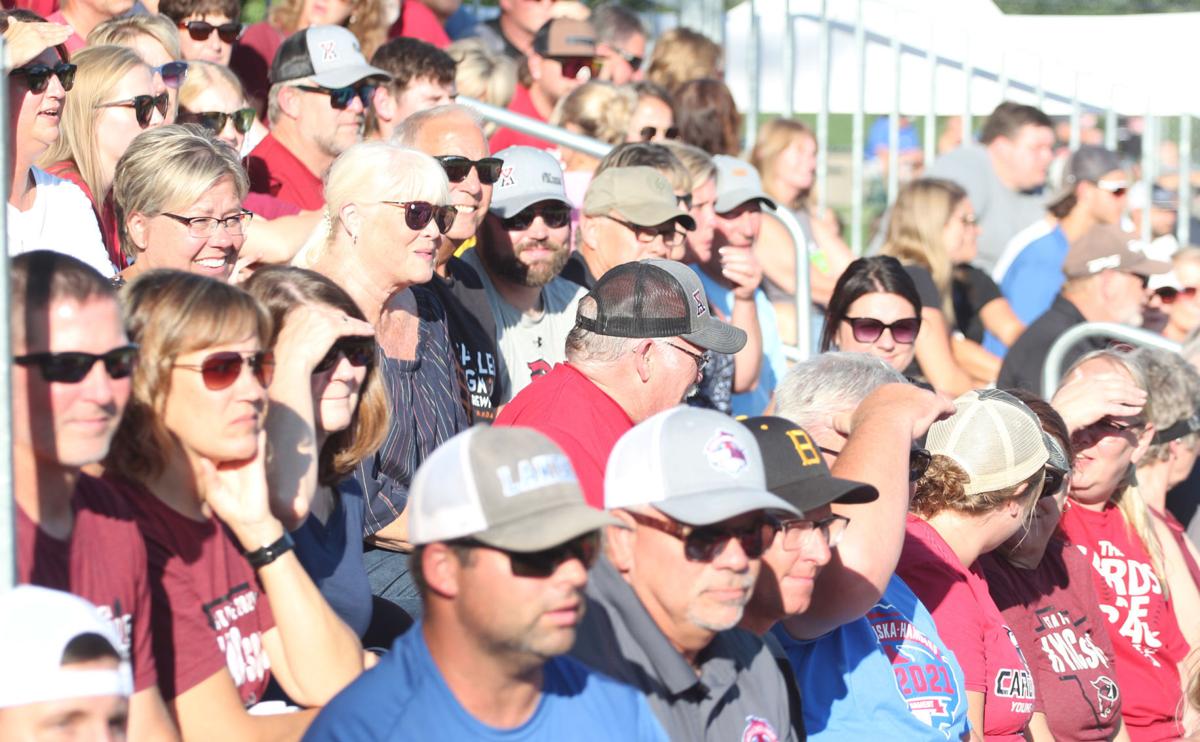 Young America's contingent was rocking early on, leading 4-0 against St. Patrick. The Cardinals saw the Irish score four runs late in a 6-5 loss.

St. Patrick fans celebrate a come-from-behind win over Young America on Sept. 4 in the third round of the Class C State Amateur Baseball Tournament at Athletic Park in Chaska. An estimated 1,500 or so fans were in the park for the final pitch.

Matt Geislinger, after striking out nine batters in a second weekend shutout for Watkins, threw a no-hitter with 15 strikeouts in a 3-0 win over St. Martin on Sept. 4 in Chaska.

Fans flocked to Athletic Park in Chaska for a match-up between Young America and St. Patrick, an estimated 1,500 spectators in the park on Sept. 4.

Young America's contingent was rocking early on, leading 4-0 against St. Patrick. The Cardinals saw the Irish score four runs late in a 6-5 loss.

Waconia felt right at home in front of a large Friday night crowd in Chaska, breaking open a third round game with Luxemburg with a five-run seventh inning in a 9-2 victory Sept. 3 at Athletic Park.

The Lakers hit two home runs, including a two-run shot from Jake Hendricks top open the scoring in the fourth inning. Hendricks finished with three RBIs and two runs scored.

Kodey Simon was dominant for his second straight state start, allowing a single run on five hits and a walk with eight strikeouts over seven innings. Draftees Will LaLonde of Mayer and Tanner Luebke of Waconia recorded the final six outs.

Reed Pfannenstein was hurt by walks, seven total, in allowing eight runs (six earned) with nine strikeouts for Luxemburg, which reached the third weekend as the runner-up out of Region 15C.

Waconia returns to its home field in the state quarterfinals at 3 p.m. on Sunday, Sept. 5 against the winner of Maple Lake and Alexandria.

A combined 10 errors in the game, early miscues from Bluffton were the more costly as Sartell scored five times in the opening three frames, adding runs in five of the last six innings in an 11-1 final on Sept. 3 in Waconia.

David Deminsky struck out 13 of 29 batters faced, the lone run scored by the Braves unearned. The Muskies left-hander surrendered just three hits over seven innings in improving to 3-0 in the tournament.

Deminsky has allowed one earned run with 42 strikeouts in 24 innings pitched in three starts.

Cody Partch drove in three runs with Jace Otto going 2-for-4 with two RBIs for Sartell at the plate. Peyton Rondesvedt had one of four hits for the Braves, scoring the lone run.

Sartell faces Sobieski in the quarterfinals at noon on Sunday, Sept. 5 at Waconia.

Matt Geislinger recorded the 25th no-hitter in Minnesota Amateur Baseball State Tournament history, striking out 15 batters, including the final two outs, as Watkins defeated St. Martin 3-0 in the third round on Sept. 4 in Chaska.

The Martins, which were no-hit in their first state game, yet still won 1-0 over Fergus Falls, became the first team in state baseball history to have no hits in back-to-back state tournament games.

And there it is ...
A no-hitter for Matt Geislinger of @ClippersWatkins in the @wch2021 state tournament. @MinnBaseball

Watkins, which loaded the bases in the first inning, a total of four runners, yet did not score, did score in the third inning. Kevin Kramer singled, stole second and advanced to third base on the throw. Kramer sprinted home on a throw from the pitcher to first base on a come-backer to the mound.

The Clippers added two runs in the eighth inning with Dan Berg and Brenden Ashton reaching base, moving up 90 feet on a Justin Thompson bunt single. Thompson, a Chaska High School graduate, is playing for his fourth state tournament team (Jordan, Chanhassen, Cold Spring, Watkins) after being drafted by Belle Plaine in the Tigers' second-place state finish.

A Carter Block RBI-single and Geislinger sacrifice fly extended the advantage to 3-0 for Watkins.

The Clippers are back in Chaska at 11 a.m. on Sunday against the winner of Young America and St. Patrick. Thompson will get the ball on his old high school field for Watkins.

Dumont and Jordan Roos' run in the state tournament came to a halt in the third round, a 5-0 loss to Sobieski on Sept. 4 in Waconia.

The Saints were making Region 9's first trip to the final weekend in seven years.

Randall draftee Caleb Strack earned his third win of the tournament for Sobieski, a two-hit shutout in the complete game. Strack has two shutouts in the tournament, totaling 33 strikeouts in allowing seven hits, two earned runs in 24 innings.

Four of Sobieski's seven hits were doubles, including a two-RBI, two hit game from Jake Kapphahn. Josh Wenzel reached base three times, scoring every time as well for the Skis.

Sobieski draws Sartell in the quarterfinals in Waconia on Sunday, Sept. 5 at noon.

Making their second state appearance, the Region 16 champions are in the quarterfinals of Class C, scoring twice late to overcome Maple Lake 5-3 on Sept. 3 in Chaska.

Chris Curry's RBI-double in the seventh inning proved to be the winning run for the Black Sox.

Eric Carlsen, 3-for-4 for the game, plated a fifth run in the eighth inning to create some separation.

Making second state appearance, Alexandria is moving on to the quarterfinals on Sunday in Waconia vs @WaconiaLakers#WCH21 @wch2021 pic.twitter.com/krjLeCOWl3

Donnie Mavencamp gave Maple Lake, the No. 4 seed out of Region 12, a 2-0 lead with a first-inning blast over the left-field fence.

Dead in the water, down 3-0 into the eighth inning, Watertown erupted for four runs, three on a bases-clearing double from Ben Smith, rallying for a 4-3 win over Eagle Lake on Sept. 4 in Waconia.

Back-to-back one-out singles from Andrew Nichols and Matt Butler, who was 2-for-2 as a reserve, started the threat with a walk and ensuing infield single from Pat Tschida opening the scoring at 3-1 for the Red Devils.

The large contingent of Watertown fans erupted as Smith's double plated all three runners for the 4-3 lead.

Butler struck out all three batters in the ninth inning, 10 strikeouts over four innings of relief, for the win.

Young America was in the driver's seat, leading 4-0, but 2020 runner-up St. Patrick stormed back, taking the lead with a two-run single from Jordan Goracke in a 6-5 win over the Cardinals in front of a crowd estimated at 1,500 at Chaska's Athletic Park.

St. Patrick, being outhit 8-3, trailing 4-0, have scored twice in the fifth, seventh and eighth innings for a 6-5 lead with 2 outs in 8th inning pic.twitter.com/SEvtwOmxfG

A game, and crowd, that lived up to its billing, two of the premier Class C teams in the state of Minnesota, the Irish rallied with two runs in the fifth, seventh and eighth innings.

Once outhit 8-3 in the game, the difference was one after Goracke knocked a single into left-center field, two runners crossing home plate for the 6-5 lead. Young America elected to intentionally walk Matt Ambroz to face Goracke.

Young America, already leading 2-0, a RBI-double off the bat of Josh Lenz in the second inning, claimed a 4-0 advantage in the fifth inning on Roch Whittaker's two-run single.

St. Patrick put two runners on in the fifth and seventh, electing to sacrifice bunt, moving both players into scoring position. The move paid off both times, the Irish getting two runs, a big hit coming from Jack Friedges to pull within 5-4 in the seventh inning.

Dillon Whittaker was tagged for six runs on six hits with five strikeouts for the Cardinals, who were ousted in the semifinal round by St. Patrick in 2020.

Trevor Divinski worked 3 2/3 innings of relief, allowing just one base runner on a ninth inning walk, striking out four, to earn the win for St. Patrick.

The Irish will play Watkins at 11 a.m. on Sunday in Chaska.

Hits lopsided through nine innings, Milroy got the one they needed, a line drive off the bat of Andy Schmidt, scoring Jackson Hughes from second base, in a walk-off win for the Yankees over New Ulm 4-3 on Sept. 4 in Chaska.

. @MilroyYankees win in the 10th and will move on to the Quarterfinals! @MilroyStats @MinnBaseball @wch2021

The Yankees outhit the Brewers 16-4 for the game.

Seven of the nine Milroy starters in the batting order had multi-game hits led by Schmidt (3-for-4), who reached base five times.

New Ulm extended the game with center fielder JT Hoffmann, the younger brother of Chanhassen's Zach Hoffmann, making an on-target one-hop throw to home plate for the final out of the ninth inning.

Judd Davis scored twice with two hits for New Ulm, while Hunter Renweiler owned both RBIs for the Brewers.

Milroy will face Watertown at 1:30 p.m. on Sunday in Chaska in the quarterfinals.