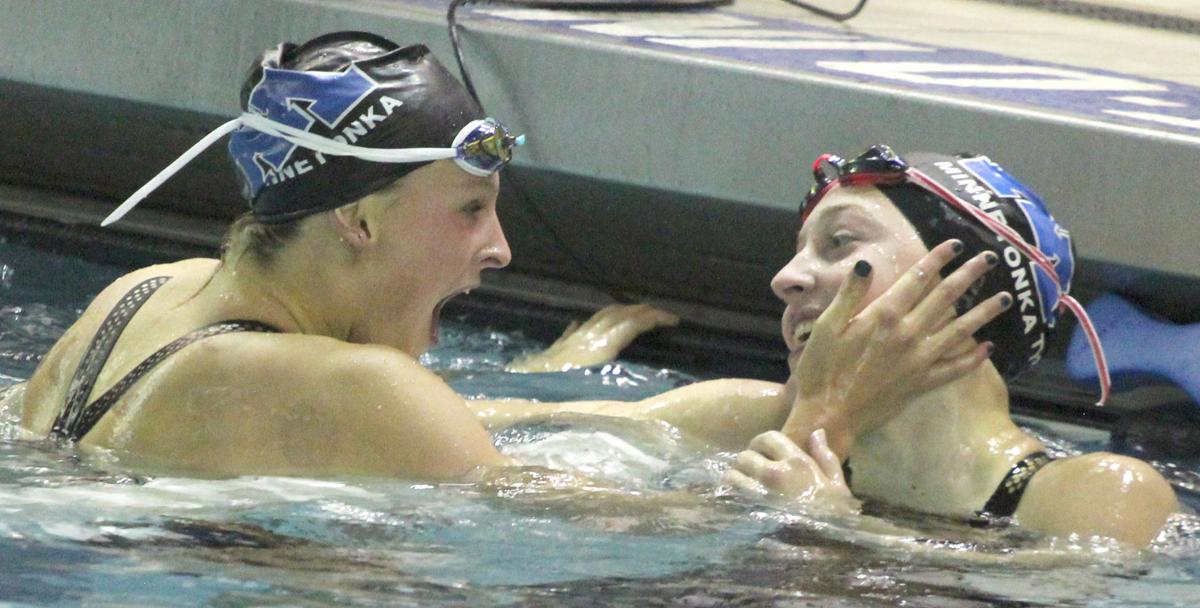 Minnetonka senior Abby Kapeller was a bit excited for freshman Paige Dillon, the duo going 1-2 in the 100-yard backstroke at the Section 2AA Meet on Oct. 23. 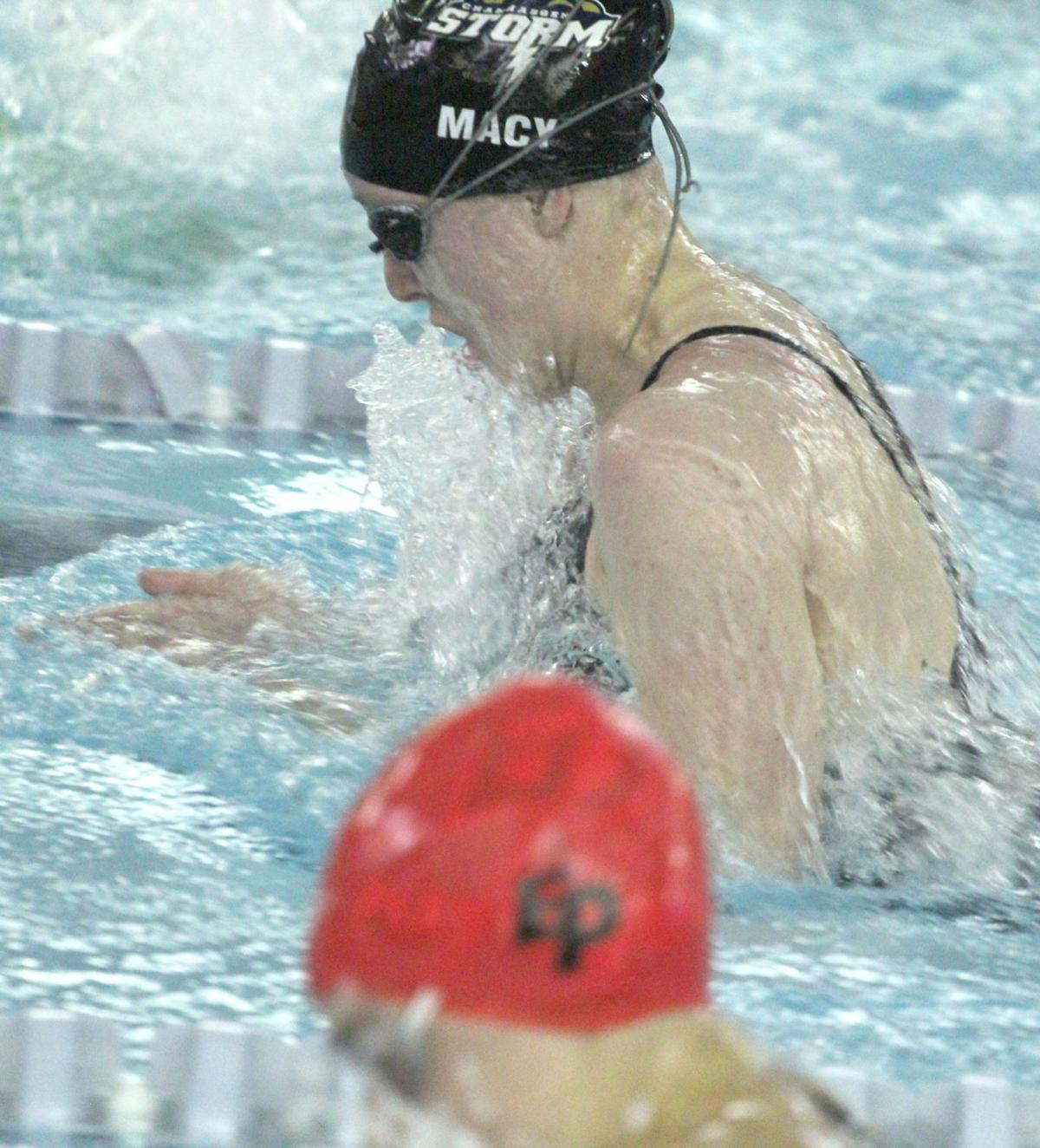 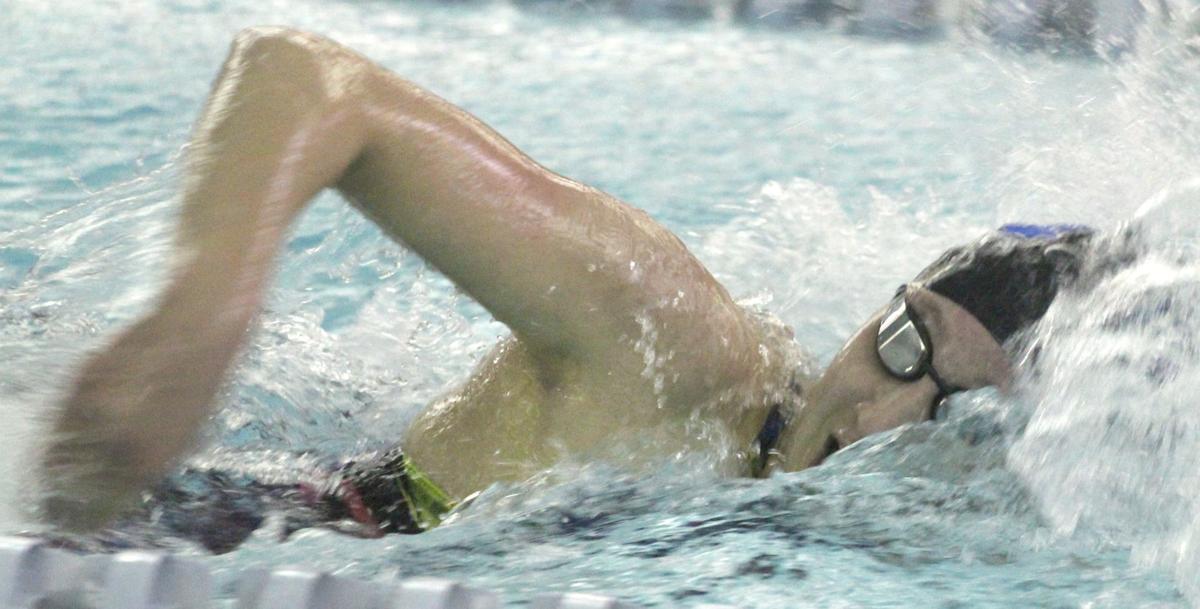 Minnetonka's Addie Diaz was a double event winner, setting a Section 2AA record in the 500-yard freestyle in a time of five minutes flat. 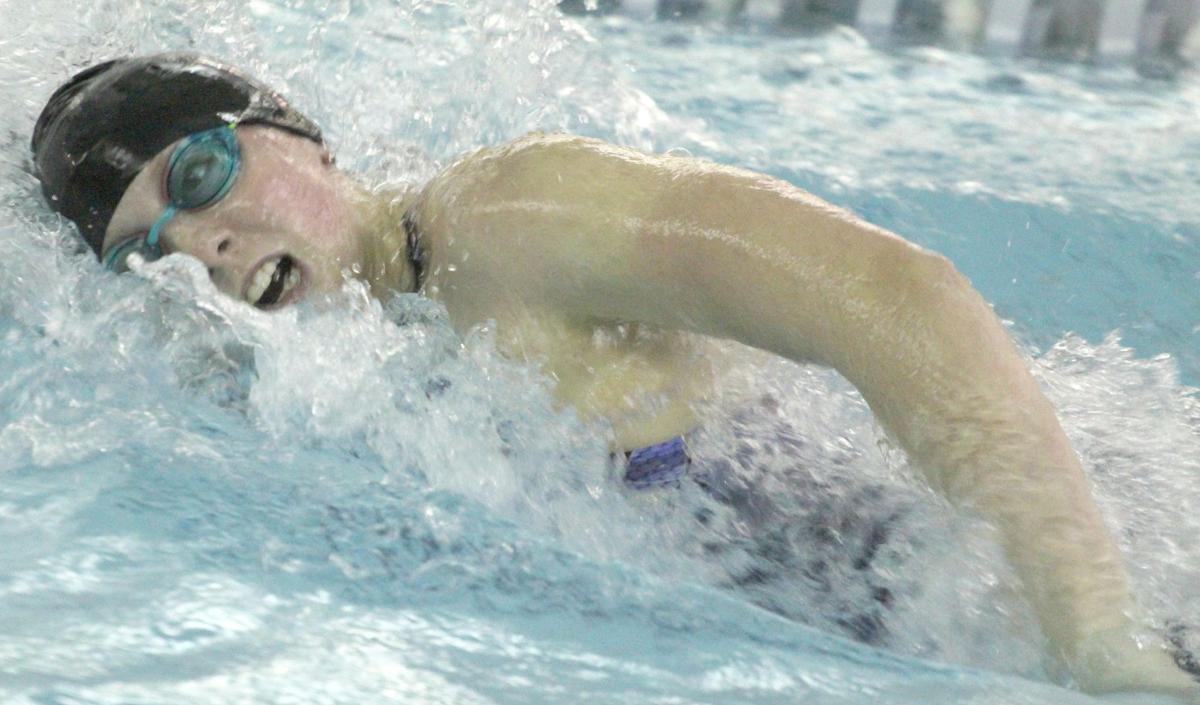 Zoe Thoma of Chanhassen broke the school record set by former state champion Kaia Grobe in the 200-yard freestyle at the Section 2AA Meet on Oct. 23. 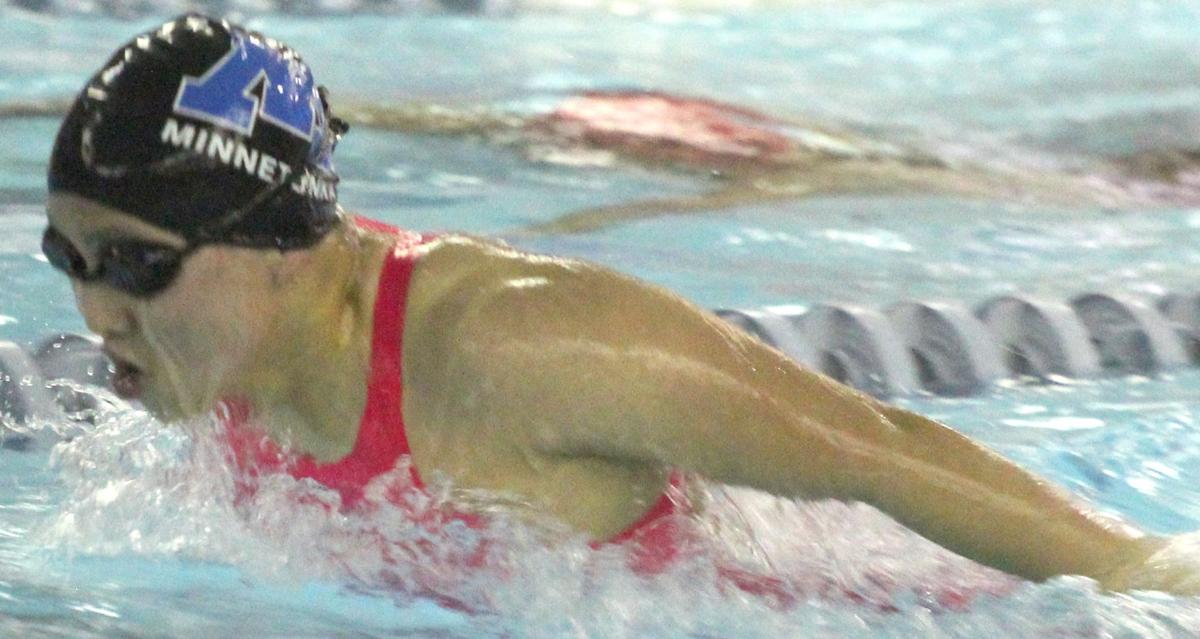 Audrey Soetanto of Minnetonka posted a pair of top finishes in the 100-yard butterfly and 200 individual medley for the Skippers at the Section 2AA Meet. 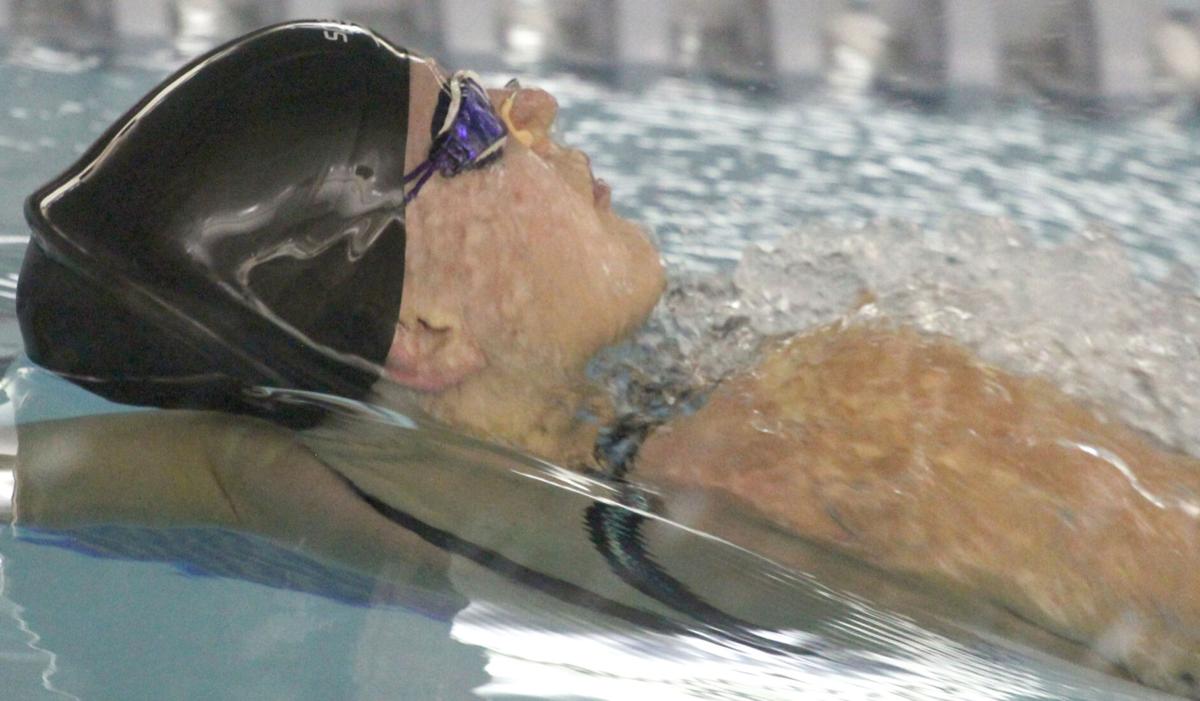 Abby Gronholz of Chanhassen swam a high school personal-best time of 56.75 seconds in her final Section 2AA Meet on Oct. 23 in Minnetonka.

Minnetonka senior Abby Kapeller was a bit excited for freshman Paige Dillon, the duo going 1-2 in the 100-yard backstroke at the Section 2AA Meet on Oct. 23.

Minnetonka's Addie Diaz was a double event winner, setting a Section 2AA record in the 500-yard freestyle in a time of five minutes flat.

Zoe Thoma of Chanhassen broke the school record set by former state champion Kaia Grobe in the 200-yard freestyle at the Section 2AA Meet on Oct. 23.

Audrey Soetanto of Minnetonka posted a pair of top finishes in the 100-yard butterfly and 200 individual medley for the Skippers at the Section 2AA Meet.

Abby Gronholz of Chanhassen swam a high school personal-best time of 56.75 seconds in her final Section 2AA Meet on Oct. 23 in Minnetonka.

Abby Kapeller was committed to the University of Virginia long before the 2020 Minnetonka swim season abruptly began. There were options. Swim for the Skippers, or train with her Riptides club team?

Sophie Macy made her choice with Washington State University on Aug. 1. At that point, high school athletics this fall yet were confirmed. Would training be with Chanhassen or WEST Express club team?

In the end, the decision was made, a shortened Minnesota State High School League season was allowed, with restrictions. None that stopped Kapeller or Macy from swimming one last time with high school teammates.

"You know, I was a captain this year, and whatever this year ended up being, knowing how strong we would be as a team, I went into the season knowing I would have my team behind me. I wanted to be here for my team. Being here one last season with these girls, that's what means the most to me. High school is something that only comes around once. I was going to milk one more year out of it for sure," said Kapeller, who skipped her sophomore high school season to train for an Olympic Trial cut time.

"For me, the season the way it was, I think for me it was a season of mental growth. The past five years on this team I've been someone who's incredibly anxious, incredibly nervous, stressed in these kind of meets. It was refreshing coming into this meet really focused on this being the last time I get to be with my swim family, my girls. It was an opportunity I wouldn't trade for anything. Even if I didn't get the times I wanted, it's a learning experience, it's a growing experience, and I'll be a better person because of the experiences this season," Macy said.

With no state meet in 2020, Kapeller, the defending champion in the 50-yard freestyle and 100-yard backstroke, and Macy, a four-event state podium finisher in 2019, the end of the road was the Section 2AA meet on Oct. 23 at Minnetonka Middle School East.

The first time all season swimming against more than one team, with Minnetonka and Chanhassen joined by Eden Prairie and Chaska.

"We were certainly fortunate to get to race against Tonka, against EP, Chaska. I've got a lot of great friends on those three teams, and they all have great competitors, and they allowed me to push myself to a higher level. A much higher standard than any other meet this season. Approaching this meet, it did feel like a big meet," Macy said.

Minnetonka, the heavy favorite to win the program's first girls state title since 1976 -- three relay disqualifications for a wrong line-up card in 2012 cost the Skippers a team title -- had to settle for its sixth consecutive Section 2AA title.

Minnetonka put up 557 points to 497 from a strong performing Eden Prairie squad. In total, the Skippers racked up five event wins, including a Section 2AA record time of 5:00.29 from Addie Diaz, eclipsing the 2019 mark from former Skipper Penelope Helm.

Kapeller was a double individual champion, first to the wall in the 50-yard freestyle (23.40 seconds) and pacing a 1-2 finish with freshman teammate Paige Dillon in the 100-yard backstroke (55.29 seconds).

Kapeller diving across the lane divider to hug Dillon, who shaved nearly four seconds from her season-best for a runner-up time of 56.24.

"It was really difficult, I'm not going to lie. A new coaching staff, it felt like a whole new everything. State is something unlike any other event for high school. The energy that is brought out at the U pool. You can't mimic that in any way, so I think we tried to look at (the section meet) as something else. We tried to make the best out of it," Kapeller said.

Macy has been chasing the school record in the 200 individual medley for years. She was fifth at state as a freshman, sixth a season ago after posting a personal-best 2:04.70 in the preliminaries.

Bettering that time with a swim of 2:04.50 in her final high school attempt, a section title by nearly three seconds, wasn't much of a consolation at the time. By the end of the meet, Macy, second in the 100-yard breaststroke, also in a personal-record 1:04.37, chose to reflect on what was gained this season.

"Our last practices it really felt like it was ending. We realized we were in the same pool (Chaska Middle School East -- Chanhassen and Chaska trade off facilities each week to train) that we all started in five years ago. That's really when today felt like a really big meet. Maybe it wasn't exactly what we were hoping for, but it was a great bookmark for our time together," Macy said.

In total, the Storm had six state-qualifying times as well as section champion diver Alyssa Konz, who set a school record with an 11-dive score of 386.35.

In a normal year, Minnetonka would had advanced 18 swims to state along with Section 2AA diving runner-up Rachel Patton (370.45).

Fifteen of the 18 swims would have been seeded in the top eight including the top seed time of 3:27.31 -- by six seconds -- from the 400-yard freestyle relay of Kapeller, Audrey Soetanto, Addie Diaz, and Nadia Helm. The time was just 55 hundredths of a second off a pool record.

Soetanto, Section 2AA runner-up in the 100-yard butterfly (57.22) and fourth in the 200 individual medley (2:08.79), along with Quinci Wheeler in the 100-yard breaststroke (1:04.65/third place) and Dillon in the backstroke, would have also been likely top-eight finishers at state.

Add in section runner-up times from the 200 medley relay (1:44.03/Kapeller-Wheeler-Soetanto-Regan Miller) and 200 freestyle relay (1:37.18/Tori Sigfrid-Rachel Shelstad-Dillon-Helm) and Minnetonka would have been cooking at state.

"I'm excited for them. Someone has to do it, someone has to make it happen, and I know it will be them," said Kapeller of the 2021 Skippers. "I think it would have been us this year. We have so many strong juniors. It's crazy how deep that class is. I have no doubt they'll do it next year."

Looking for the swim of the meet for Chanhassen? That came in the 200-yard freestyle race from junior Zoe Thoma.

Just yards back of leader Diaz at the halfway point, Thoma's strong start was matched by a strong finish, a school-record time of 1:53.65 for third place in the event.

Comparing times from all five sections, Thoma's career-best effort was fifth around the state.

Just minutes earlier, Thoma swam the butterfly leg in a third-place 200-yard medley relay team of Abby Gronholz, Macy, and Daisy Lang. Their time of 1:47.42 was under the state standard.

A close second for swim of the meet for the Storm may have come from Gronholz, who like Thoma, set a personal-record on the high school team, a 100-yard backstroke time of 56.75 seconds.

Gronholz, who lost a swim-off to reach the championship finals of the state backstroke race in 2018, would have been seeded sixth in 2020.

Chanhassen's sixth state swim would have come from the 400-yard freestyle team of Thoma, Lang, Gronholz, and Macy. The Storm were fourth overall in 3:37.38.

"This year was kind of wild. Last year we had those first two weeks to kind of build-up, be ready for the intense, grueling two months that were going to follow. This year we were thrown right into the fire. The first three weeks, pardon my French, were hell. A lot of us were tied, we were agitated, we were upset with each other and then we realized we had nine weeks, seven meets total. We had to make the best of it and I think we did," Macy said.