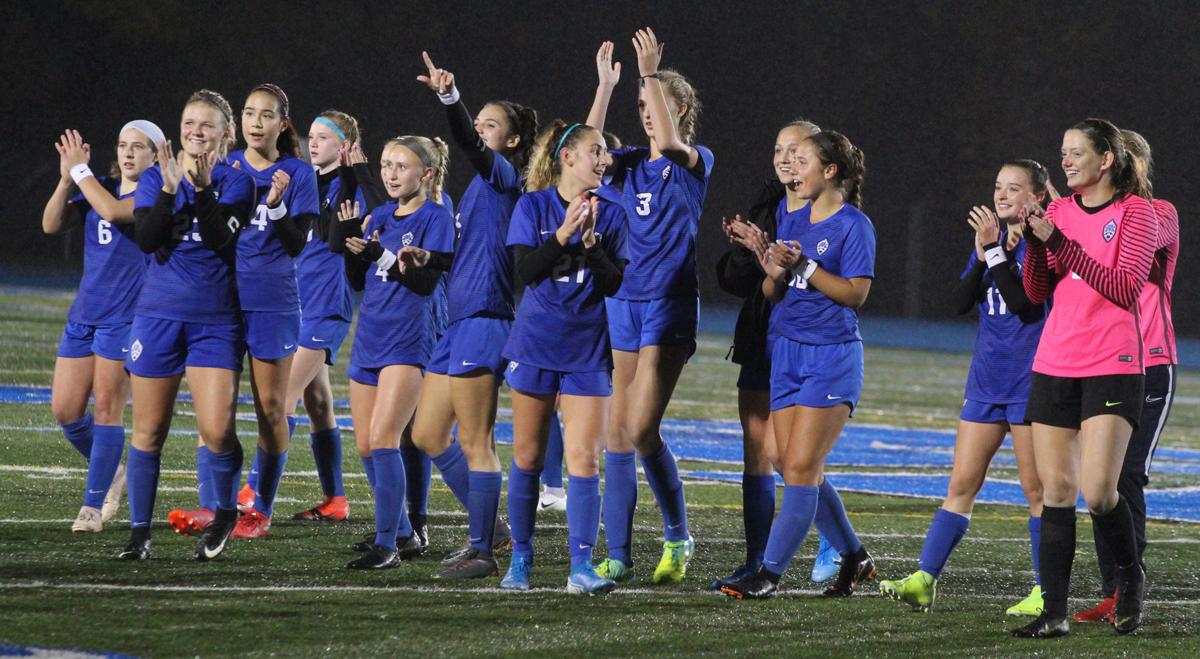 Minnetonka players thank the fans that showed up despite drizzly conditions for a 2-0 section semifinal win Oct. 10.

Catherine Moore's shot heads toward the upper right corner of the net for a Minnetonka 1-0 lead. 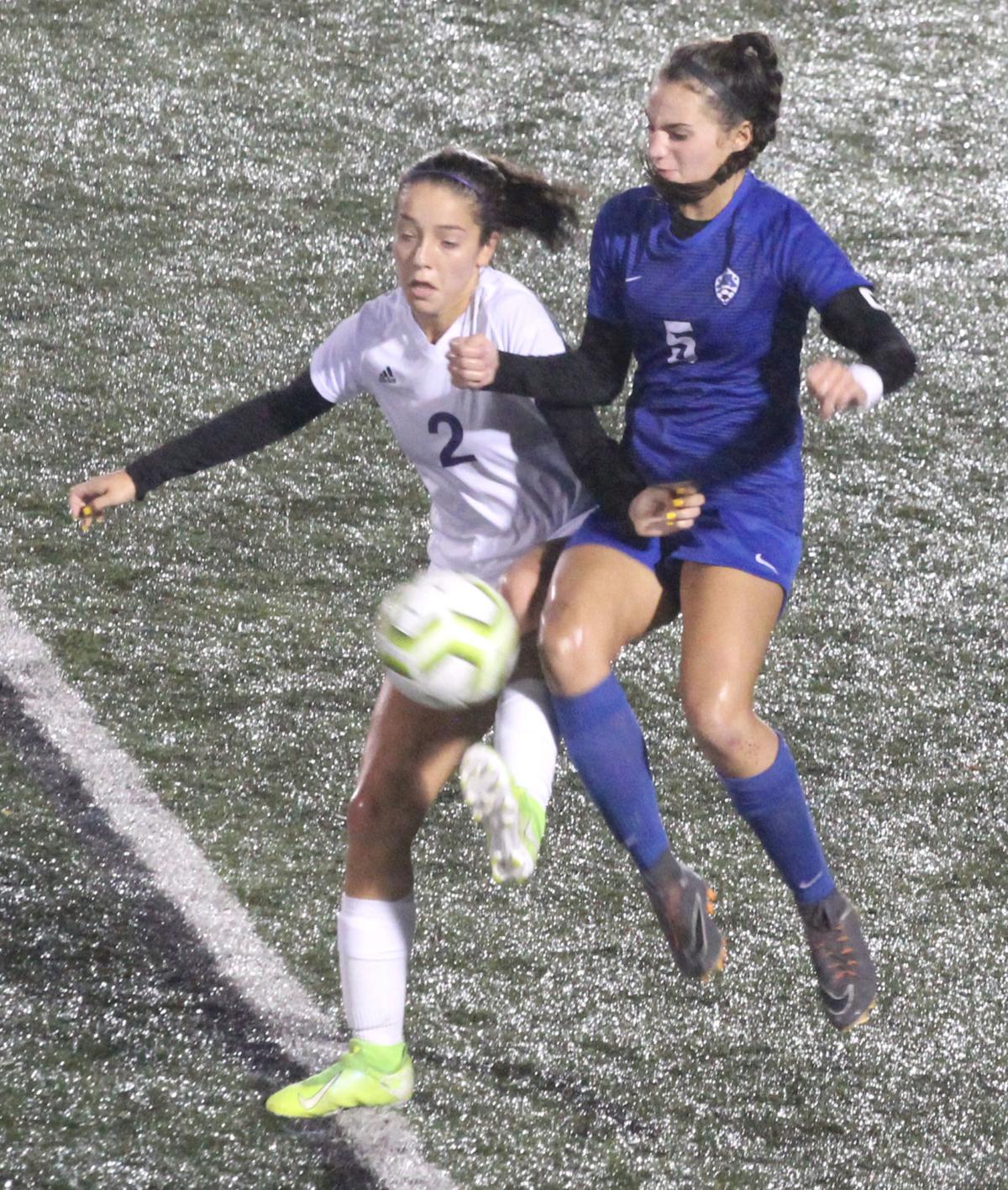 Mnnetonka's Lissa Mizutani and Chaska's Sammie Ramboldt fight for possession in the second half of a section semifinal contest Oct. 10. 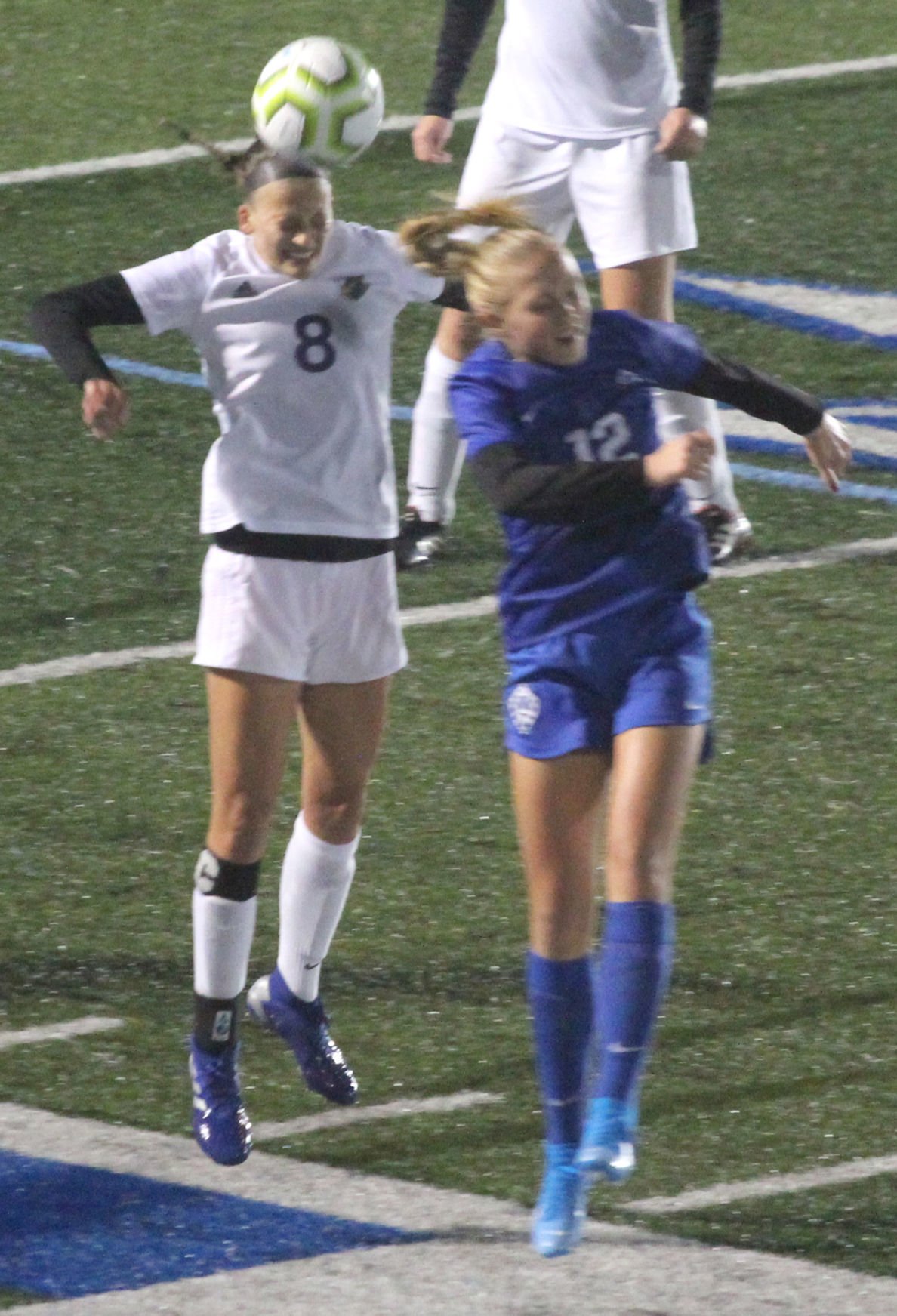 Lilly Halvorson, one of three seniors on the Chaska roster, with a header in a 2-0 semifinal loss at Minnetonka Oct. 10.

Minnetonka players thank the fans that showed up despite drizzly conditions for a 2-0 section semifinal win Oct. 10.

Catherine Moore's shot heads toward the upper right corner of the net for a Minnetonka 1-0 lead.

Mnnetonka's Lissa Mizutani and Chaska's Sammie Ramboldt fight for possession in the second half of a section semifinal contest Oct. 10.

Lilly Halvorson, one of three seniors on the Chaska roster, with a header in a 2-0 semifinal loss at Minnetonka Oct. 10.

Catherine Moore was in street clothes Oct. 3 for Minnetonka's 2-0 upset win of Edina. The sidelines a place where the now Skipper senior captain spent too much of her time in recent years.

Recovered from an ACL injury sustained in game No. 2 of the 2018 season -- a year in which Minnetonka won a state title -- Moore banged up her other knee in a collision with a goaltender in the first 2019 meeting with Edina.

Back on the turf Oct. 10 in the Section 2AA semifinals, Moore made the most of her return, scoring twice in a 2-0 win over Chaska.

Both goals came in the second half, the winner in the 55th minute, the insurance goal in the 66th minute.

"It's definitely exciting. I'm so proud of the team. We've been working so hard. We know we can get it. We had sort of a rough patch in the season, but we were able to come out of that and I'm just so confident in us," Moore said.

A rainy dreary night, despite a 5-0 shots on goal advantage in the first half, Minnetonka found itself tied with Chaska after 40 minutes.

The Hawks, coming off an upset 1-0 win over Shakopee, had the best opportunity of the first half, a free kick from the top of the box that missed high.

Minnetonka kept up the pressure in the second half, Lissa Mizutani dribbling into the box, finding an open Moore with a cross for the 1-0 lead.

A Chloe Loberg corner kick found the head of Moore, her fifth goal of the season.

"Coming off this injury it means a lot to me. Everyone's putting in the work," Moore said.

Minnetonka has nine seniors on the roster, many who helped the Skippers to section titles in 2016 and 2018, a state title run over Wayzata last season.

"Some of us have been playing together for 10 years. It definitely helps the off-the-field chemistry. It's so awesome, it's so much fun. We're all such good friends. That's one of my favorite parts of the season. Everyone supports each other. When it's soccer season, we all come together," Moore said.

For Moore and Minnetonka, this season has always been one about defense. A total of nine goals allowed in a 14-2-1 record.

Lately, though, the Skippers' offense has come around, 27 goals scored in a current 8-game win streak.

"I feel like in past years we've been defensive-minded. It's usually one or two-goal games. Now we're really learning how to get the offensive side, too," Moore said.

The victory sets up a rubber match between the Section 2AA's top two seeds, Edina -- a 6-1 winner over Eden Prairie -- and Minnetonka.

The Hornets scored five second-half goals in a 5-0 win in the first meeting. The Skippers got some revenge in a 2-0 shutout in the last meeting. Both teams shared the Lake Conference title, a first for Minnetonka.

There's no other team Minnetonka would rather face for the section title at 5:30 p.m. on Tuesday, Oct. 15 at Chanhassen High School.

"It makes it that much more fun. It's a better time to score goals then," Moore said.

The nine wins for Chaska was the most 2013. The team graduates just three seniors, Alex Peterson, Ky Florek and Lilly Halvorson.