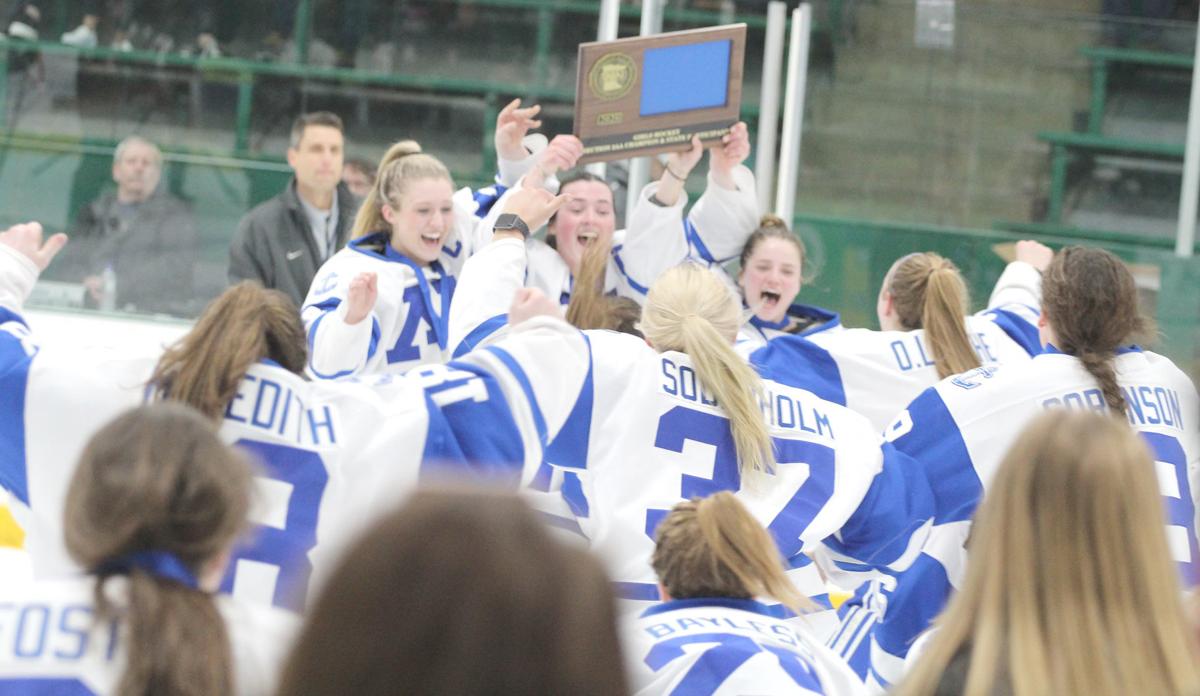 Minnetonka captains claim the Section 2AA championship plaque, celebrating with the rest of the team after defeating Eden Prairie 6-2 on Feb. 14 at Braemar Arena. 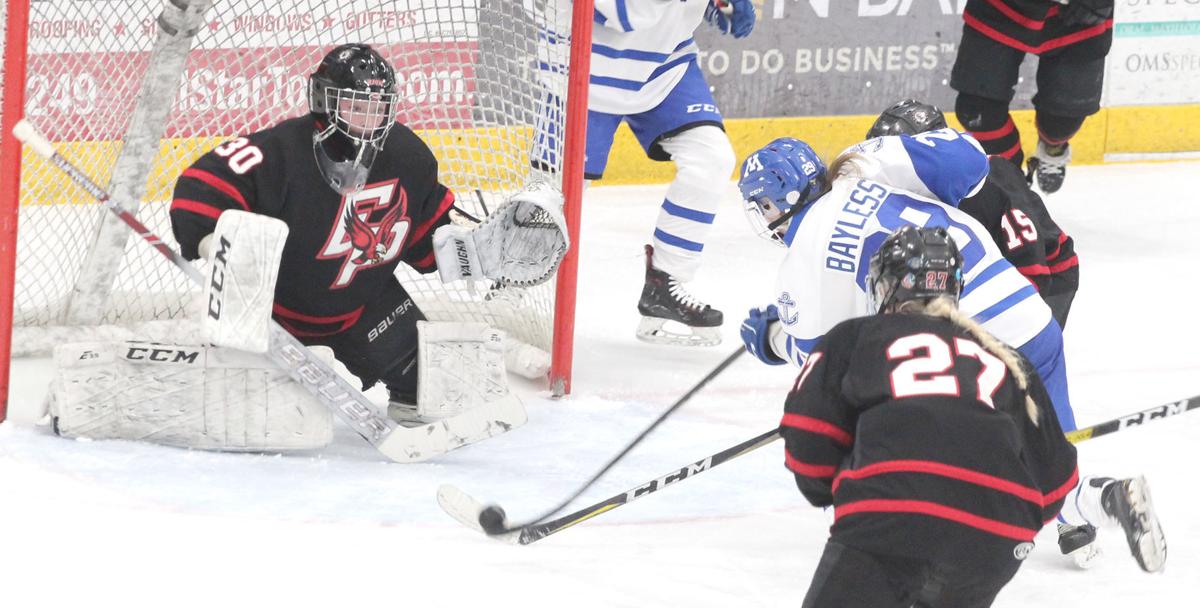 Emily Bayless tries to pick the top-left corner with a second-period chance for Minnetonka in the Section 2AA final Feb. 14. 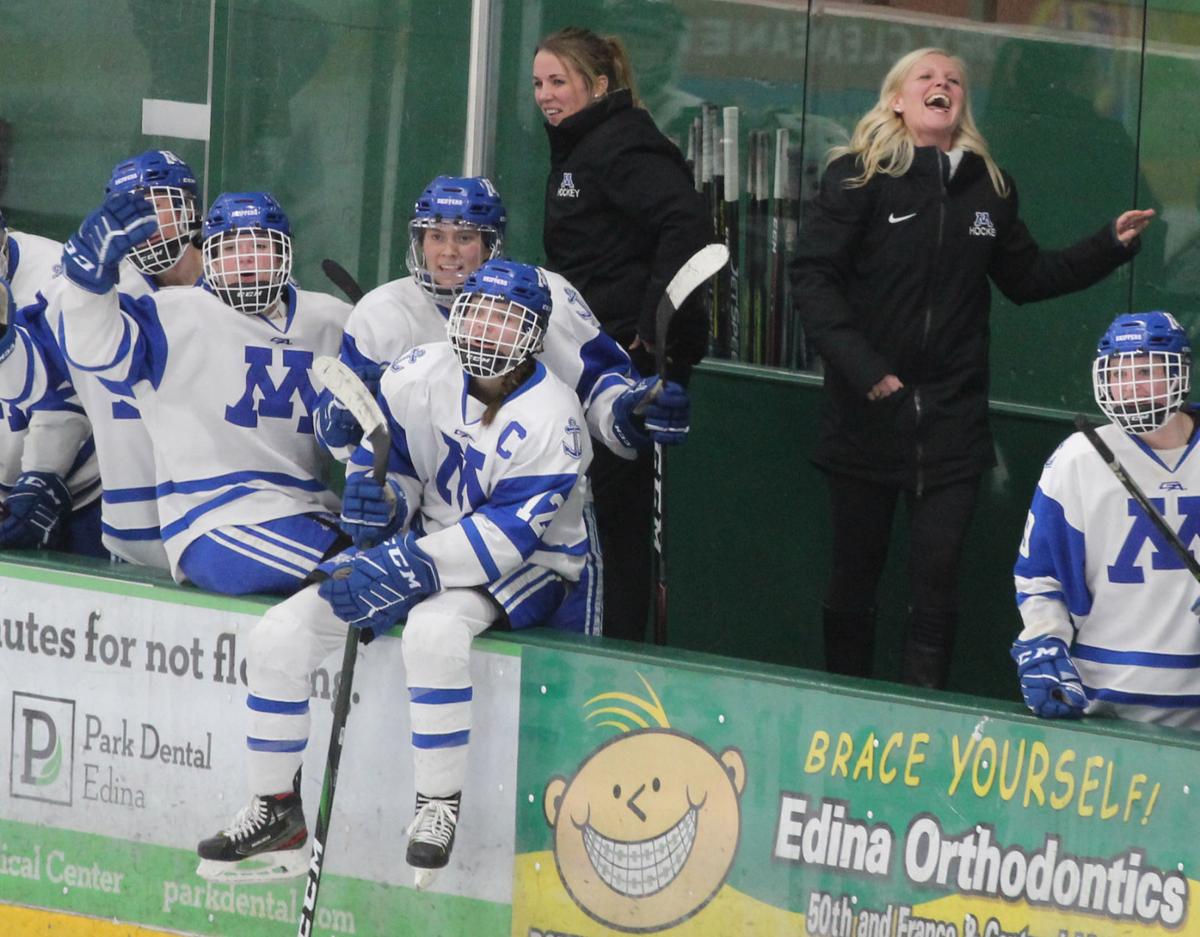 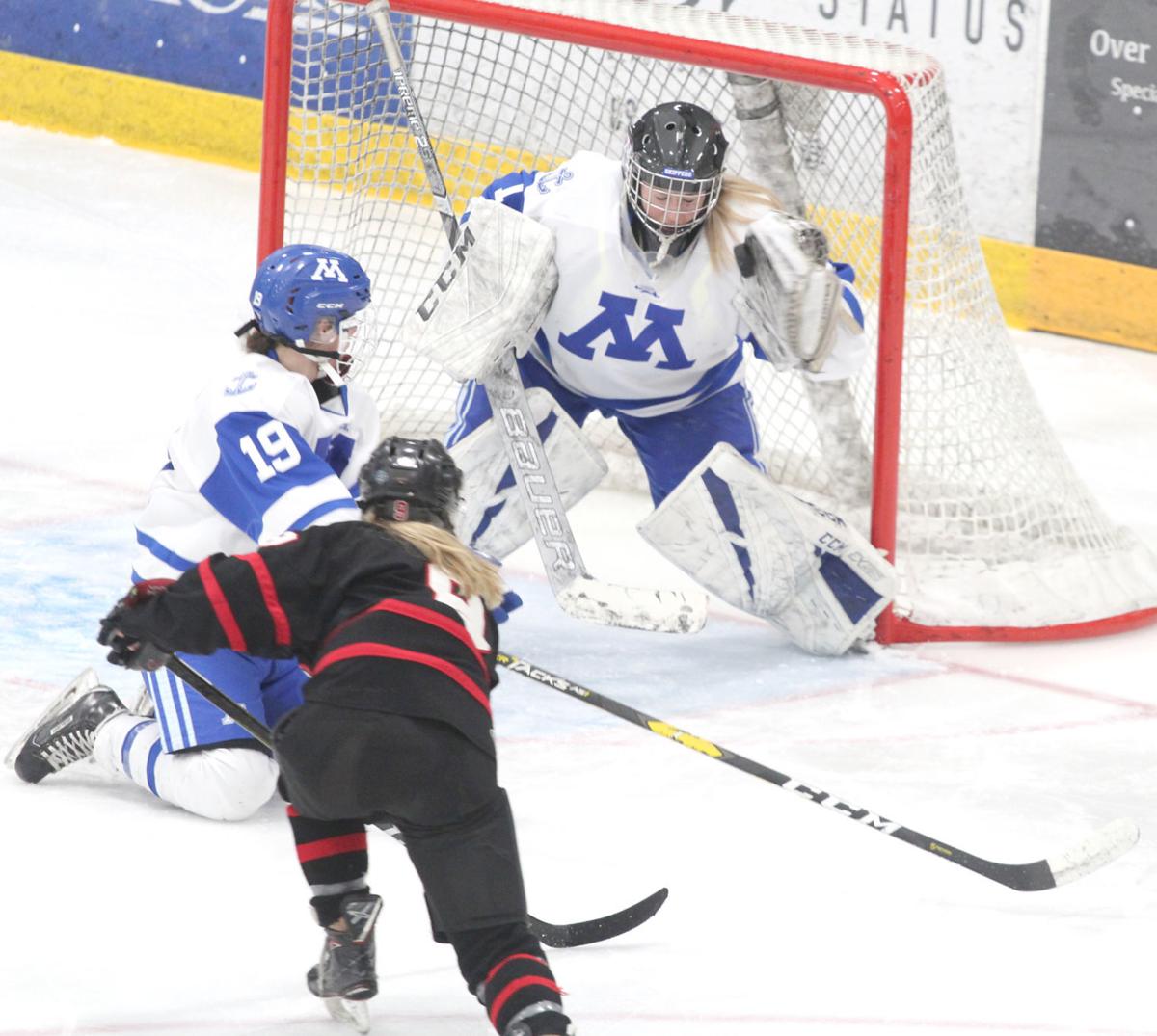 Minnetonka goaltender Brynn Dulac eyes a puck into her glove on a shot from Eden Prairie skater Grace Kuipers. Dulac made 28 saves in the section championship win. 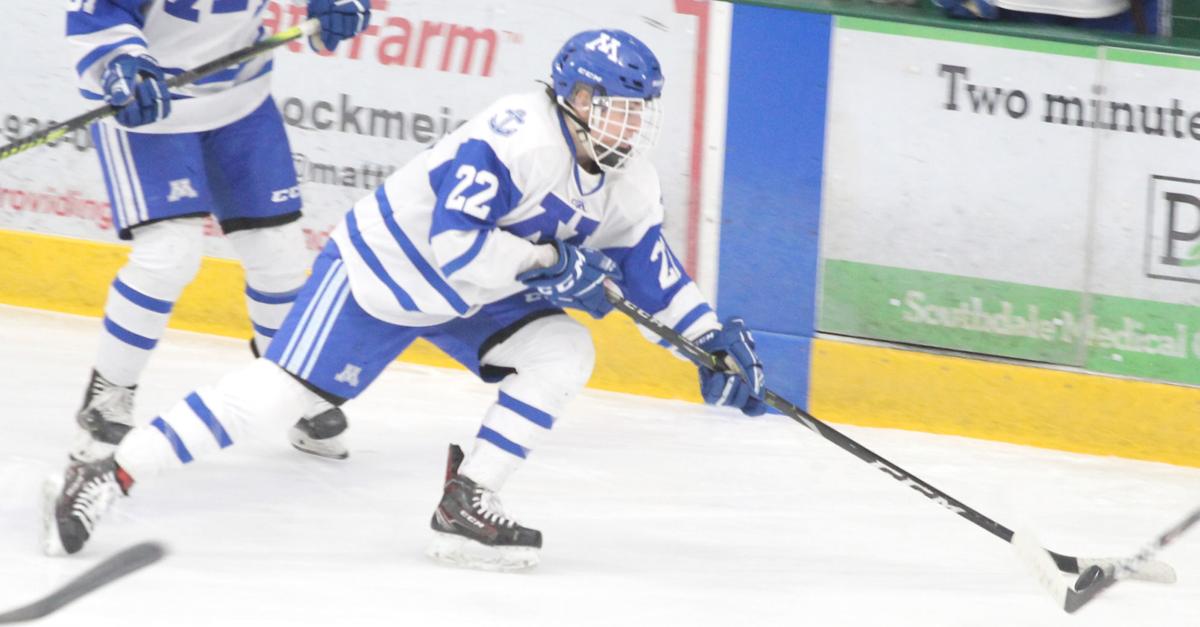 Minnetonka senior Lisa LaRoche carries the puck into the zone in the third period, a 6-2 win over Eden Prairie on Feb. 14. 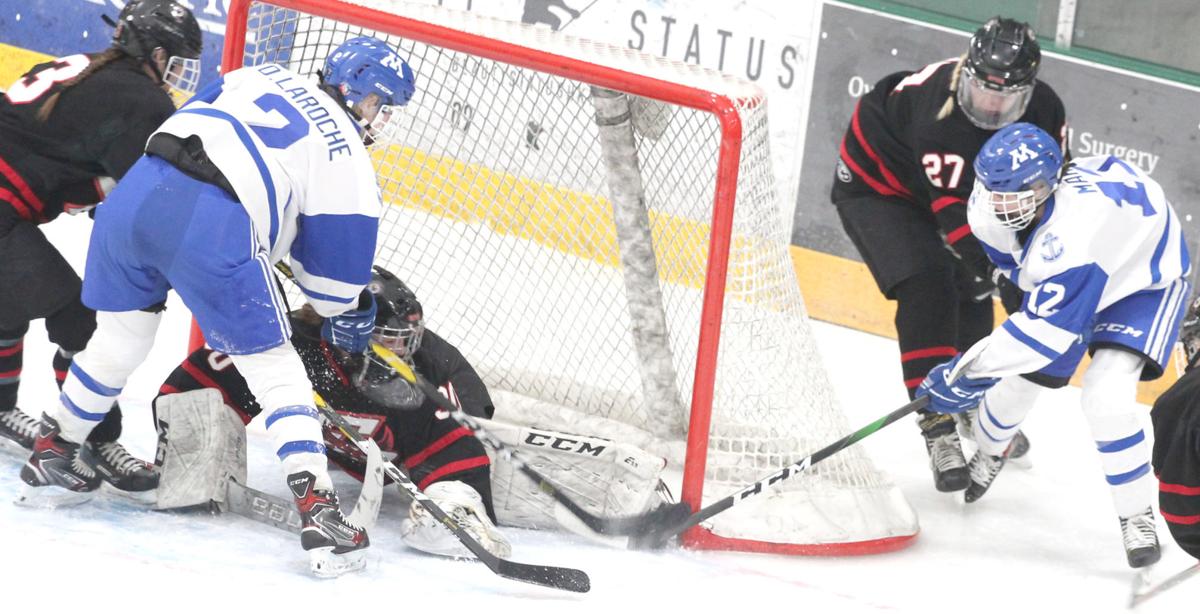 Minnetonka's Lacey Martin attempts to stuff the puck past the outstretched pad of Eden Prairie goaltender Molly Goergen in the first period. 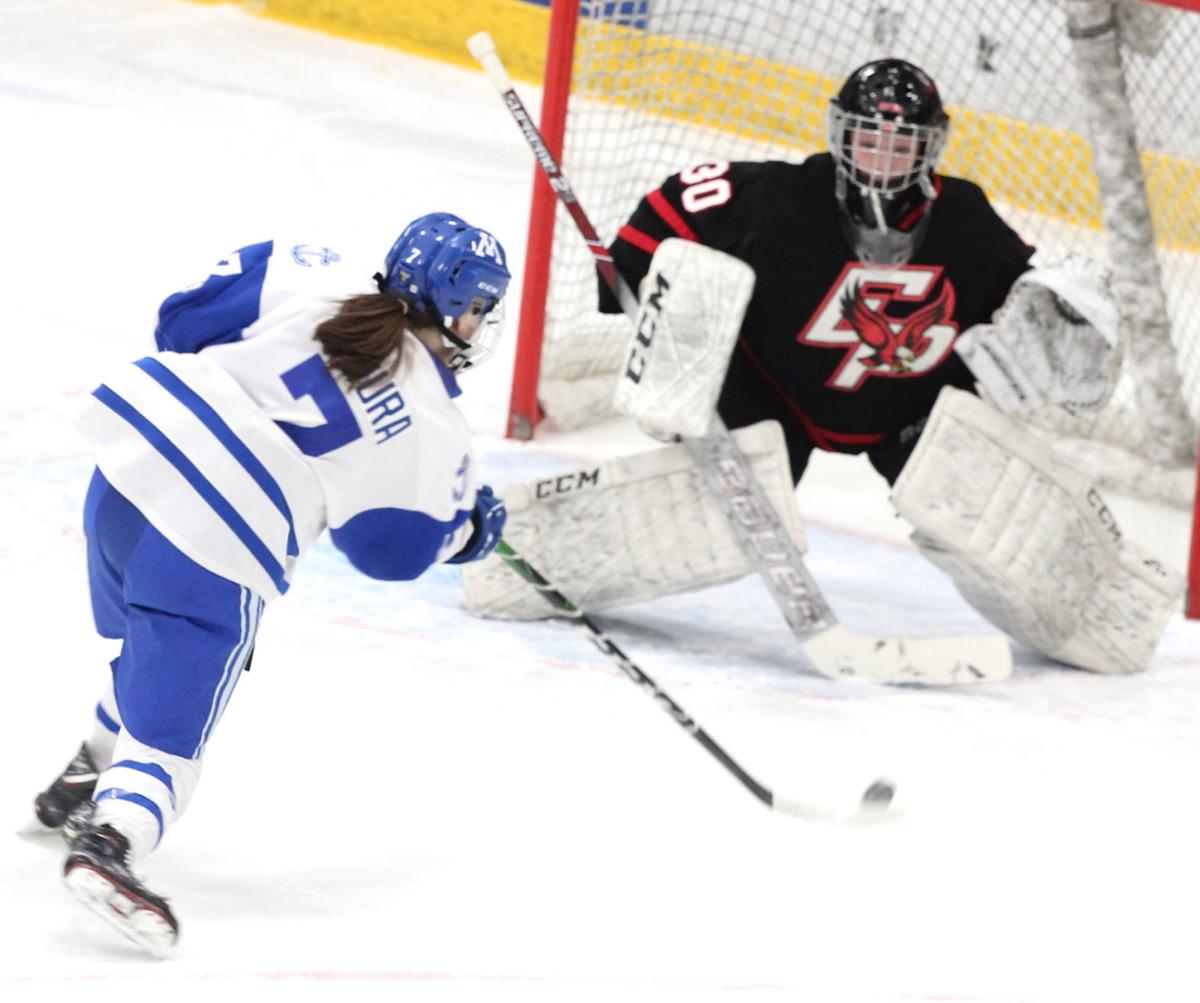 Minnetonka captains claim the Section 2AA championship plaque, celebrating with the rest of the team after defeating Eden Prairie 6-2 on Feb. 14 at Braemar Arena.

Emily Bayless tries to pick the top-left corner with a second-period chance for Minnetonka in the Section 2AA final Feb. 14.

Minnetonka goaltender Brynn Dulac eyes a puck into her glove on a shot from Eden Prairie skater Grace Kuipers. Dulac made 28 saves in the section championship win.

Minnetonka senior Lisa LaRoche carries the puck into the zone in the third period, a 6-2 win over Eden Prairie on Feb. 14.

Minnetonka's Lacey Martin attempts to stuff the puck past the outstretched pad of Eden Prairie goaltender Molly Goergen in the first period.

Minnetonka girls hockey head coach Tracy Cassano reminded the Skippers before the game it wasn't necessary to keep it close. How about put up a big number?

Senior Mandi Soderholm did her part to do just that, her early third-period goal one of three Minnetonka tallies in the final frame as the Skippers clinched a second straight Section 2AA title in a 6-2 win over Eden Prairie Feb. 14 at Braemar Arena in Edina.

The only other team to score six goals this season on the Eagles was No. 2 Andover.

"The score does the talking," Soderholm said.

"We said in the locker room, the M on our jersey is for Minnetonka, not me. We played for each other and that's what the score says," Minnetonka senior Lisa LaRoche said.

Minnetonka, held to two or fewer goals in five of the last nine games into the Section 2AA final, scored six times on 24 shots, including two short-handed goals.

It was Soderholm's score at 1:48 of the third period that gave Minnetonka a little breathing room at 4-2.

The initial shot from Olivia Meredith bobbled, Soderholm was quick to pounce, working through the Eden Prairie defender, timing her swat of the stick with the bounce of the puck for the goal.

"It was really something. I just had this feeling after the goal of here we go, we actually have this," Soderholm said.

It was the second straight game that Soderholm's line score, teammate Ellie Alvarez netting the eventual winner in a semifinal win over Shakopee Feb. 11.

A deeper Minnetonka squad kept Eden Prairie in check in the third period, Emily Bayless the recipient of a Lacey Martin pass for a partial breakaway goal on her backhand over the glove of Eagles goaltender Molly Gorgen for the 5-2 lead with under nine minutes to play.

Rory Guilday capped the scoring with a short-handed breakaway goal, which started a celebration of cheers on the Minnetonka bench. The Skippers were going back to state.

"Last year, having a torn ACL, it was pretty rough sitting out, so I'm really glad we took the title once again. Our team gets another shot," said Soderholm, who grew up in the lakes area north of Brainerd before playing for Gentry Academy as a sophomore.

The two teams traded goals in the opening periods, Grace Sadura burying a shot under the crossbar for Minnetonka, while Ms. Hockey finalist Sydney Langseth tipped a Nora Wagner point shot on a 5-on-3 power-play to tie the game at one.

After an Olivia LaRoche tipped-in power-play goal on a shot from Ms. Hockey finalist Maggie Nicholson -- LaRoche's third point of the post-season -- Langseth countered 49 seconds later with a highlight reel score at 2-2.

Langseth, a Minnesota State University-Mankato commit, finished with five post-season goals, 34 for the season with 74 points.

"We always knew when she was on the ice. We put a stick on her, tried to slow her down. She's a good player, and we knew that coming in. We did our best to shut her down and I feel like we did that as the game went on," senior Lisa LaRoche, one of six upperclassmen defensemen, said.

Minnetonka took the lead for good at 9:21 of the second period, Martin burying a drop pass from Nicholson, who started a 3-on-2 short-handed opportunity with a steal in the defensive zone. Nicholson finished with three assists in the win.

Brynn Dulac, credited with 28 saves, came up big late in the second period. After getting a pad on a Grace Kuipers redirect, the Minnetonka junior goaltender closed the five-hole in the final second on a one-timer from Langseth, keeping the score at 3-2.

After winning 4-0 and 4-3 in December against Eden Prairie, suffering a 2-1 defeat in January, the Skippers knew they had it in them to win a third time.

"Beating them by four goals is incredible, unreal. I'm blessed to be on this team. I wouldn't want to go (to state) with any other group of girls," Lisa LaRoche, who is committed to St. Scholastica, said.

Minnetonka, third at state in 2019, will open the Class AA State Tournament at the Xcel Energy Center in St. Paul on Thursday, Feb. 20. The Skippers are the No. 3 seed behind Edina and Andover with Maple Grove fourth.

Other state qualifiers are Farmington, Hill-Murray, Roseau, and Burnsville, the team Cassano coached before coming to Minnetonka this season.

"Each year is different and I think we have the team to win it. We're going to take it one game at a time, gain confidence with each game," LaRoche said.