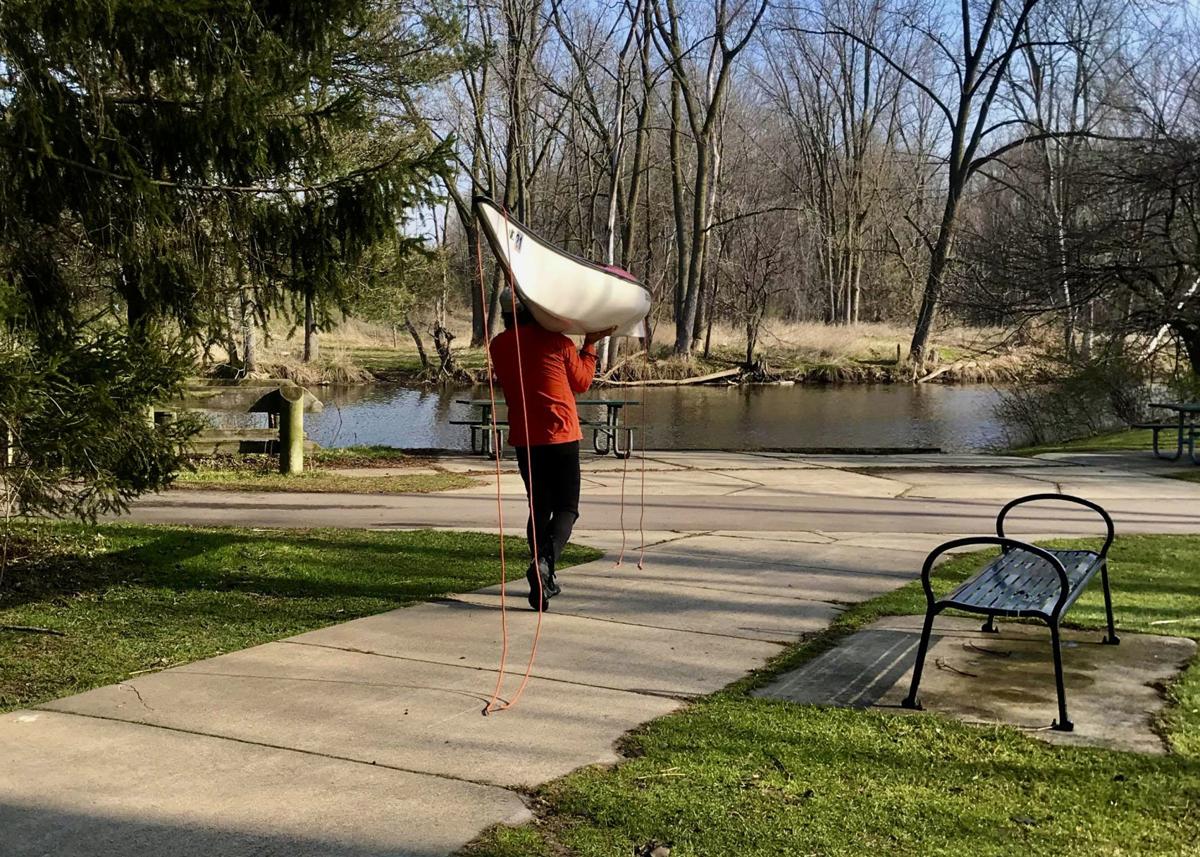 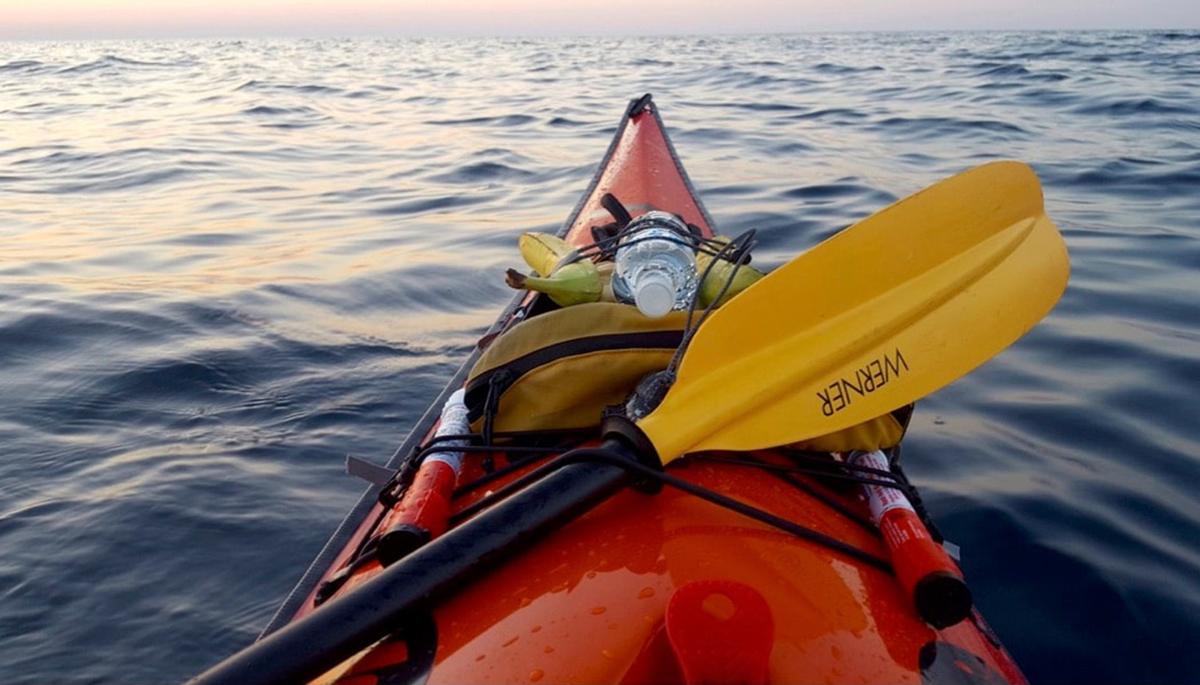 Bananas and a water bottle are strapped to Mike Stout’s kayak during his first trip on Lake Michigan. Stout has kayaked over 4,500 miles in the last four-and-a-half years. 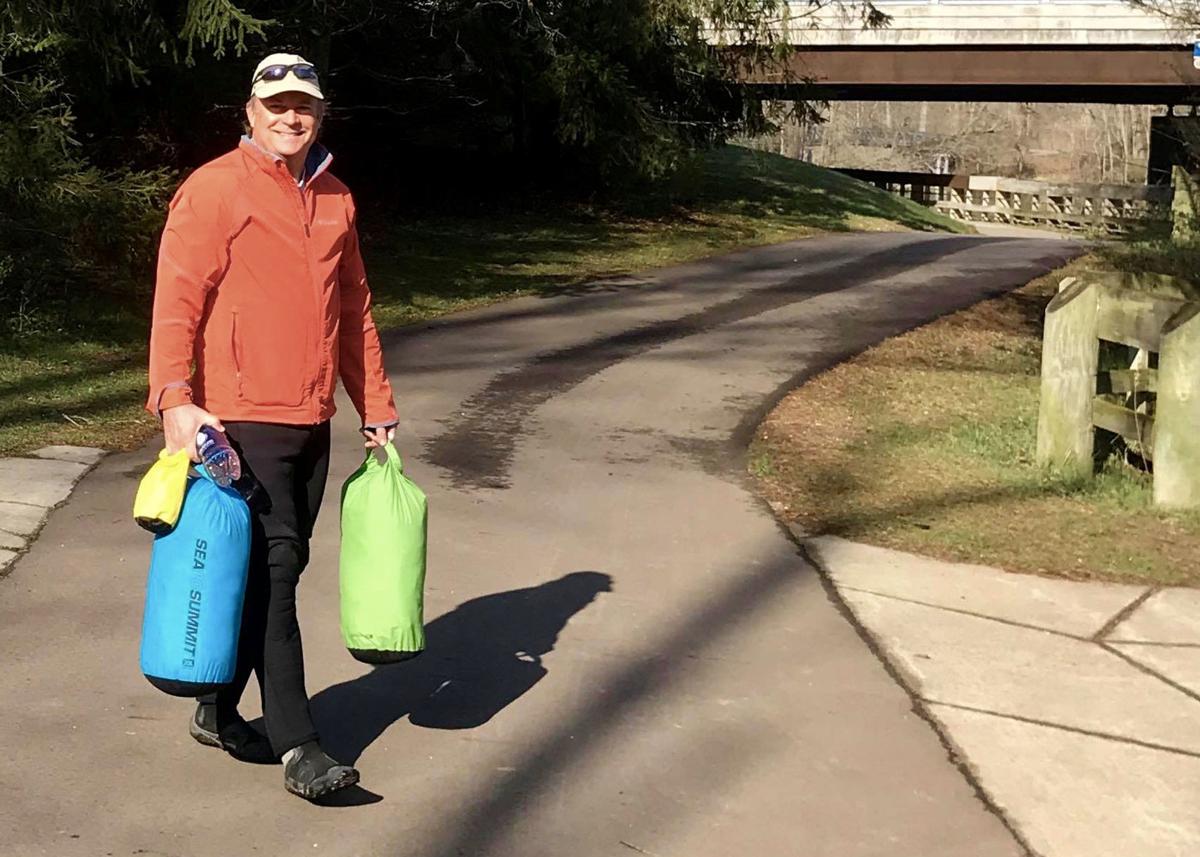 Stout holds electronics (yellow bag), sleeping bag (blue) and change of clothes (green). He is planning to paddle two more trips, around Lake Michigan and on Rock River, before ending his high-level kayaking.

Bananas and a water bottle are strapped to Mike Stout’s kayak during his first trip on Lake Michigan. Stout has kayaked over 4,500 miles in the last four-and-a-half years.

Stout holds electronics (yellow bag), sleeping bag (blue) and change of clothes (green). He is planning to paddle two more trips, around Lake Michigan and on Rock River, before ending his high-level kayaking.

For the last five years, Mike Stout’s kayak has been his sanctuary.

A way to bring him serenity and peace that few other outlets could. The cool water brushing against his hand, wildlife breathing the same natural air and stars standing brilliantly still.

But now, after giving his all to the sport, Stout is soon expecting to call his paddling life quits.

AN OFFER HE COULDN’T REFUSE

Originally, Stout, 58, from Prior Lake, wasn’t thinking about kayaking at a high level. He was working for Tamarack Consulting Group, a strategic marketing consulting firm, when he started telling a client in California that he wanted to pick up kayaking.

She wanted to support his endeavor and offered to buy him any kayak he wanted to get started.

Along with building Stout’s kayak, Goldman is one of his biggest supporters. After receiving a kind note from Stout complimenting them on building a great kayak, Goldman and NC Kayaks have kept tabs on Stout’s accomplishments in the last five years.

“He has put more miles under his boat than I can think of,” Goldman said.

When he first got the kayak, Stout originally thought paddling would only be for good sources of outdoor recreation and exercise.

So did Elizabeth Stout, his daughter.

A high schooler at the time her dad picked up the sport, Elizabeth had no idea that kayaking would become this big for her father.

“He has exceeded my expectations,” she said.

Soon, Stout began started traveling waters with determination. He wanted to push himself to the limits. His journey had begun.

“When I got into it,” Stout said, “it became more than a hobby … some would say it was an obsession.”

In the last four-and-a-half years, Stout has kayaked over 4,500 miles. Each year, his goals rise as his skill level and passion do. The first year, he kayaked across Lake Michigan. Lake Superior the next year. Then he focused on distance and last year was meant for speed.

“Every year I push for greater challenges,” he said.

All his training seemingly has brought him to this point.

In two to six weeks, he will embark on a journey on kayak reportedly never before taken.

The 100-plus mile excursion will require everything Stout has. Physically. Mentally. Emotionally.

He estimates the Wisconsin-to-Michigan portion to take anywhere from 13 to 15 hours, and then about two to four additional hours on the way back, interrupted by 4-8 hours of rest in Michigan.

Kayaking is a sport that necessitates strength. The physical strength is obvious: strong arms and wrists, a stable core and many other factors go into being able to paddle the great distance.

“If you don’t have the ability, equipment, or technique, there is not a chance you’ll make it,” Stout said.

But in tandem with the physical aspect of paddling comes the equally important mental side.

When paddling long solo trips, the unique element kayaking presents is you are all you have. No one there to cheer you on or give you support. You and your thoughts are the only conversation taking place.

Which is why it is so important to tame thoughts of panic and doubt.

“You can’t let a sense of fear overtake you,” Stout said.

What he does is try and put everything in perspective. Yes, that might sound cliche, but when he is alone on the water that long, it helps immensely. For example, in waters he knows are abyssal, he thinks back to what he knows.

He practices in waters where the depth is eight feet of water, where he knows he cannot touch the bottom. So, it doesn’t matter if he’s paddling in depths of 50 feet or 500 feet, his mind is at ease because he has trained his mind not to worry, even in deep waters.

Along with the cramping abs and aching arms, Stout is fighting two battles when he paddles across waters like Lake Michigan.

Some of Stout’s 4,500 miles have not been smooth riding.

During Easter weekend last year, he was kayaking on the Minnesota River near Le Sueur when he felt the high floodwaters pushing him. Soon his kayak caught a hanging branch of a tree and he fell in. Able to keep himself above the tree debris, Stout grabbed his paddle and kayak and began dumping the 40-degree water out of the seat.

After making it back to the main river, he fell in again. Exhausted and bitterly cold, he waited 30 minutes in the water before he heard sirens after a bystander saw him and called for help.

Now before every trip, he prepares for the possibility of an accident. Depending on the season, the layers of clothing vary — more during the colder months and less during warmer ones.

Almost five years into his kayaking passion, Stout senses that the routine he’s gotten into has stripped away some of the invigorating adventure he originally had.

“The sense of adventure isn’t quite what it used to be,” he said.

After his upcoming round trip across Lake Michigan, Stout is planning one more big excursion before he moves on from paddling. He and his friend Brian Edward are planning to go on a 320-mile trip on the Rock River in Wisconsin in late August.

Edward met Stout last July at the Wisconsin Canoe River Race in Muscoda. Later in the year, they discussed trying an excursion on the Rock River, which Edward lives along. Though he had never tried it before, Edward had it on his bucket list.

The record for the run is 112 hours. As is Stout’s nature, he will try and break it.

“It is mind over matter,” Edward said. “It will be quite a feat.”

For every kayaking trip, Stout has paddled alone. This will be his first time someone will accompany him. And Edward will revel in it.

“He is so inspirational,” he said. “I have a saying: ‘When in doubt, follow Stout.’”

Once Stout pulls his kayak from the water, a new journey might await him. Regardless if he decides to end his kayaking passion, he hopes to now take “an adventure on land” — a motorcycle.

Elizabeth, however, is not convinced he will leave the sport.

“He’s in such good shape, I can’t see him do anything else,” she said. “He says it’s his last year but I don’t quite believe that.”

“I highly doubt Mike will stay out of the water for good,” Edward said.

Even if Stout chooses to hang up the paddles, Elizabeth will support him. “I just want him to know how unbelievably proud I am (of him),” she said. “He inspires me.”

“I have pushed to be the best I can at what I am doing,” Stout said. “After this year, I think I have done all that I can.”

Stout has seen it all. Starry nights in the middle of a Great Lake, wildlife roaming in their natural habitat and bridges of all shapes and sizes. If this is his curtain call, he is not leaving this passion out of spite or regret. He will be content.

“I’ve had an incredible journey,” he said. “I’m thankful for all of it.”