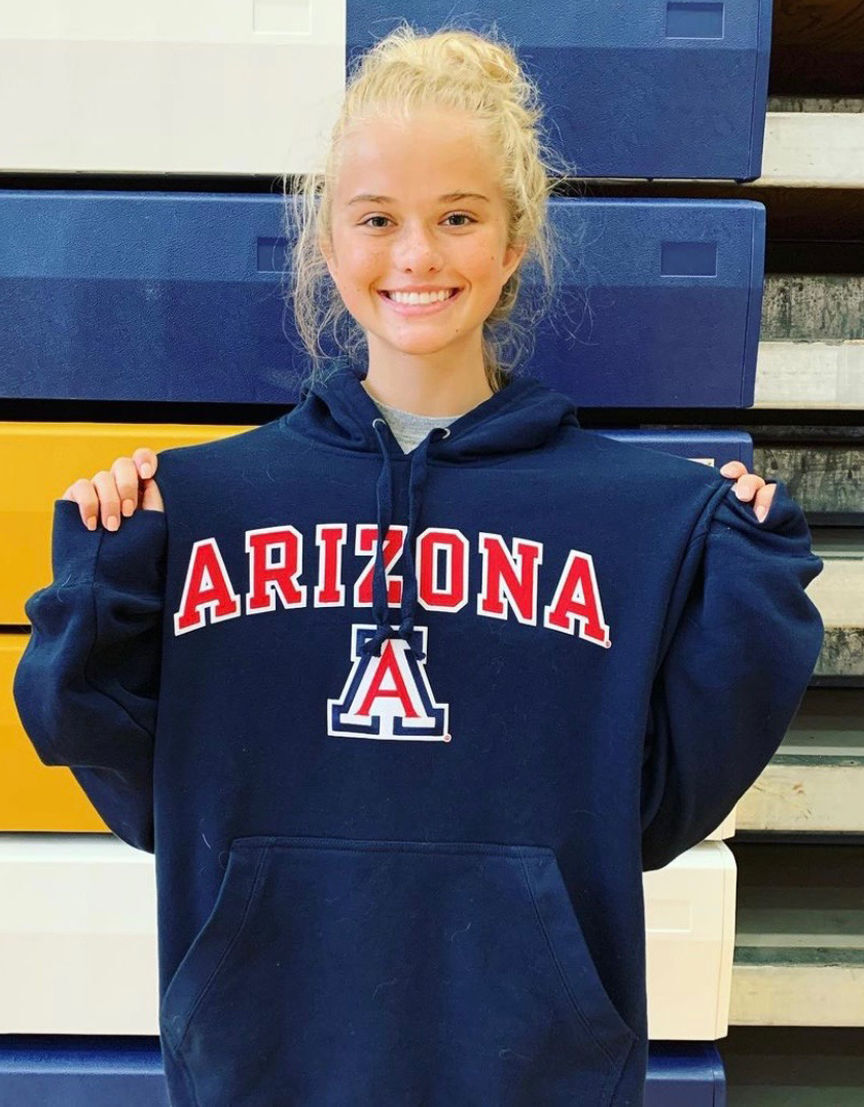 Chanhassen senior volleyball player Madison Ellman is taking her passing and digging skills to the University of Arizona next season. 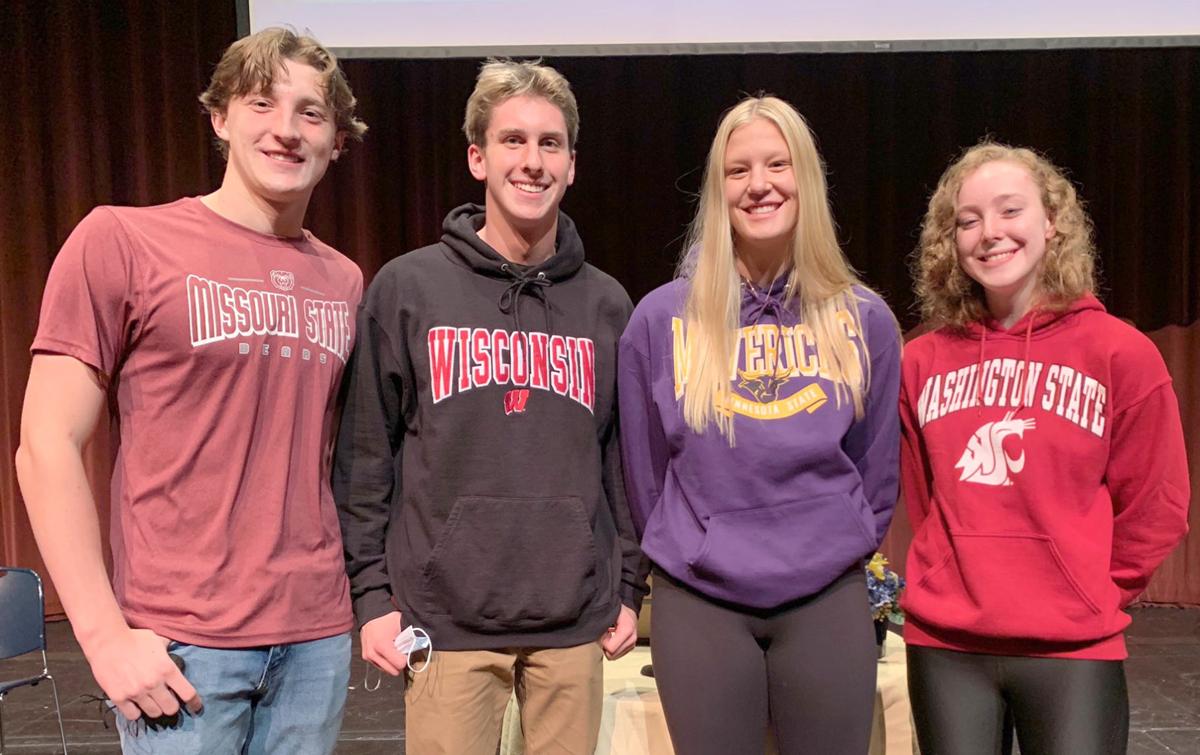 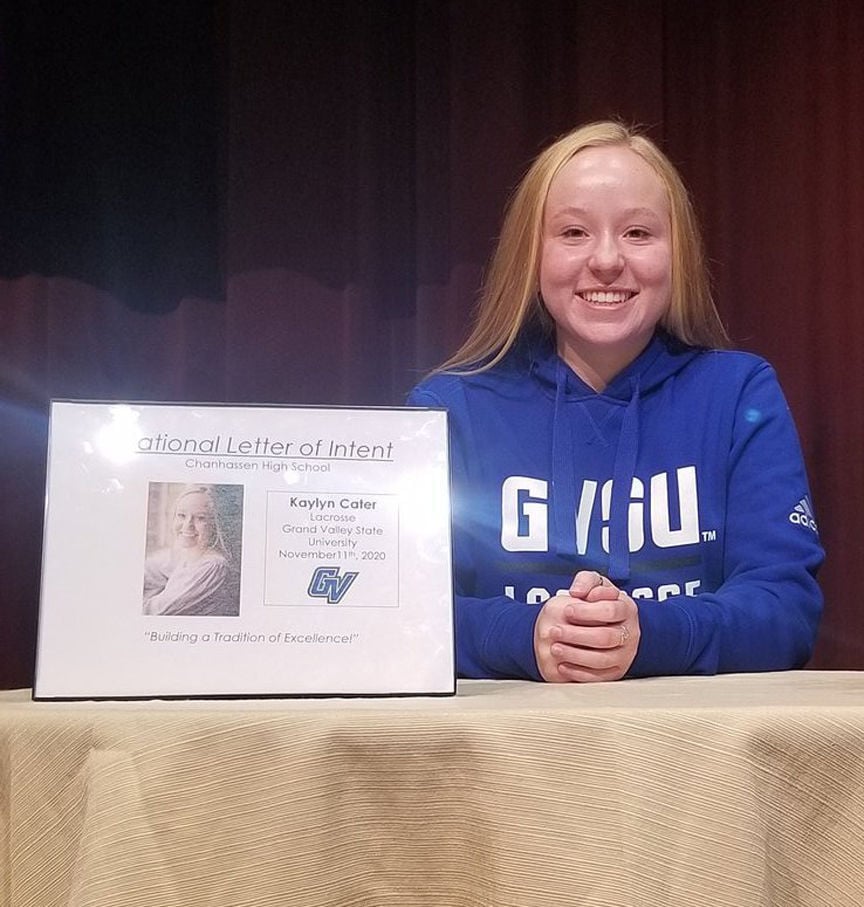 Kaylyn Cater, a starter in goal since Day One as a freshman on the Chanhassen lacrosse team, signed a National Letter of Intent on Nov. 11. She will play at Grand Valley State in Michigan.

Chanhassen senior volleyball player Madison Ellman is taking her passing and digging skills to the University of Arizona next season.

Kaylyn Cater, a starter in goal since Day One as a freshman on the Chanhassen lacrosse team, signed a National Letter of Intent on Nov. 11. She will play at Grand Valley State in Michigan.

It's been fast times at Chanhassen High for swimmers in the Class of 2021. Four teammates at WEST Express, each all-state recipients, were among seven Storm student-athletes to sign National Letters of Intent Nov. 11 in a private ceremony for families.

Bock and Hodgins were state champions last February for Chaska/Chanhassen. Bock set a school record in the 100-yard butterfly, placing first in Class AA. He swam along with Hodgins in victorious 200- and 400-yard freestyle relays.

Hodgins added his first all-state individual time in the 200 freestyle at the 2020 state meet as well.

Macy, a multi-time state podium finisher, was named the Section 2AA Swimmer of the Year last month. She was also selected as one of 34 Scholastic All-Americans from Minnesota as well in September.

Gronholz, a recent commit with the Maverick program, was among the fastest 100-yard backstroke swimmers in the state this fall.

Robbins was recently named to the Metro West Conference all-league honorable mention team for the Storm. She will compete at the University of South Dakota.

Cater, a starter in goal since her freshman season, will compete at Grand Valley State in Michigan. Cater, the daughter of the winningest lacrosse coach in Minnesota, Scott Cater of Bloomington Jefferson, a Hall of Fame goaltender at Minnesota-Duluth, in addition to playing for the Storm, is a standout for Minnesota Elite Lacrosse.

Ellman is headed to sunny University of Arizona to play for the Wildcats. Ellman, who plays for M1 during the club season, has been on varsity since her freshman season in 2017 as well.

Ellman credited her club coach, Laura Larson, a former Arizona libero, and club director Doug Bergman for helping her with securing the offer.

"(Laura) holds a bunch of digs records at Arizona. She's kind of a legend," Ellman said. "It's really exciting, knowing I'm going to go up against all of these girls I have been watching on TV."

What sets Ellman apart from many on the floor is her composure. The thing is, it's always been there, from her freshman year on. Nothing seemed to rattle her.

"I think going into my freshman I just worked so hard. I knew the libero position was open and I wanted it. I started played that position just two years before in seventh grade, so it was about working hard, understanding everything about it," Ellman said.

Whether a long rally, a missed dig or serve, or any situation on the court, Ellman draws back on one key factor.

"If I hit some kind of mental block, I trust in my training. I forget everything else and I just focus on what I have been taught and I know that will help me succeed," Ellman said.

That mental toughness came into play Nov. 10 against St. Louis Park for her high school Chanhassen squad. A 41-39 game three score in a match with St. Louis Park, a state qualifying team in 2019.

"It's definitely been a learning experience. We lost a lot of girls over the years since I started playing varsity in ninth grade. Really there's only one girl I've played with more than one season," Ellman said. "Last year's group was close, and everyone just knew what each other needed on and off the court.

"This year there's been a lot of extra communication. A lot of teaching on the court, showing girls the way to do things. But I think we're really making strides. We're showing a lot of improvement," she added.

With four matches remaining in the regular season, for Ellman it's closing out her high school season like she started it. Sacrificing her body to get to that ball no one expects her to get.

"I think at this point it's routine. I've done it so many times, it doesn't hurt me. You really understand how to dive the right way to avoid injury. For me, I look at it as a commitment, and all-out effort to dive all over the ground and do what I can for my team," Ellman said.

A commitment. How fitting on signing day?