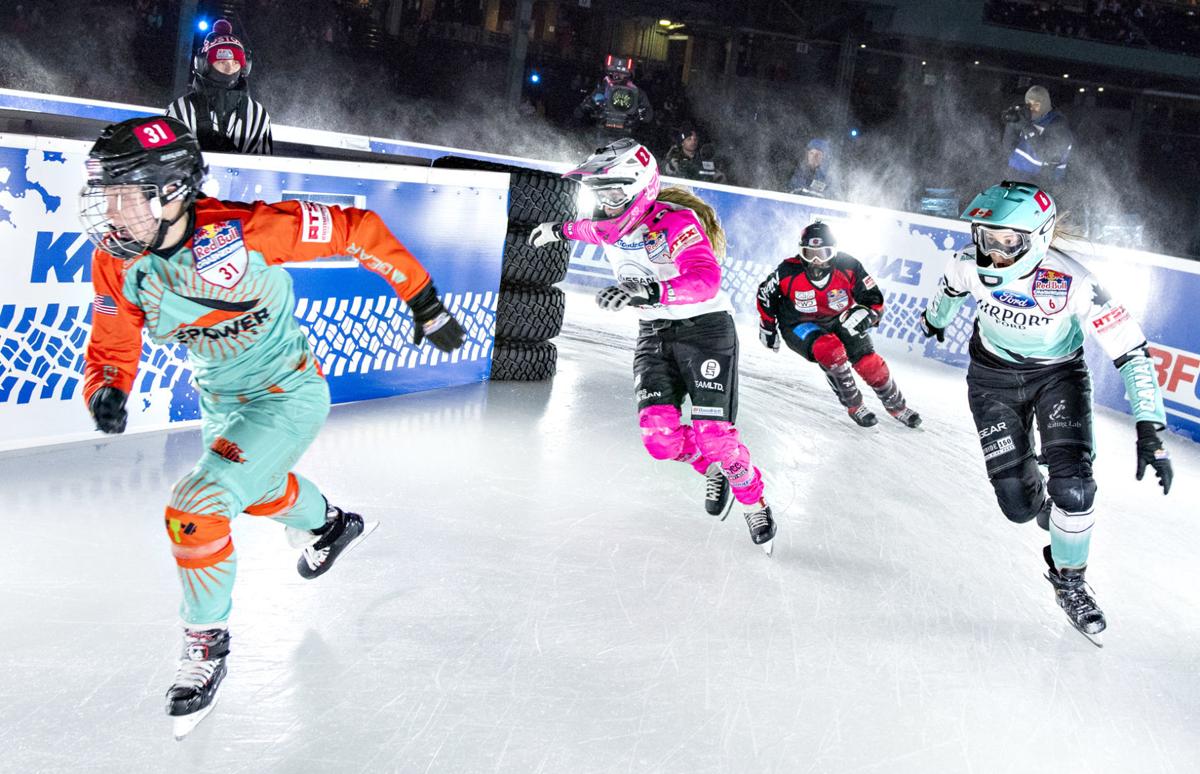 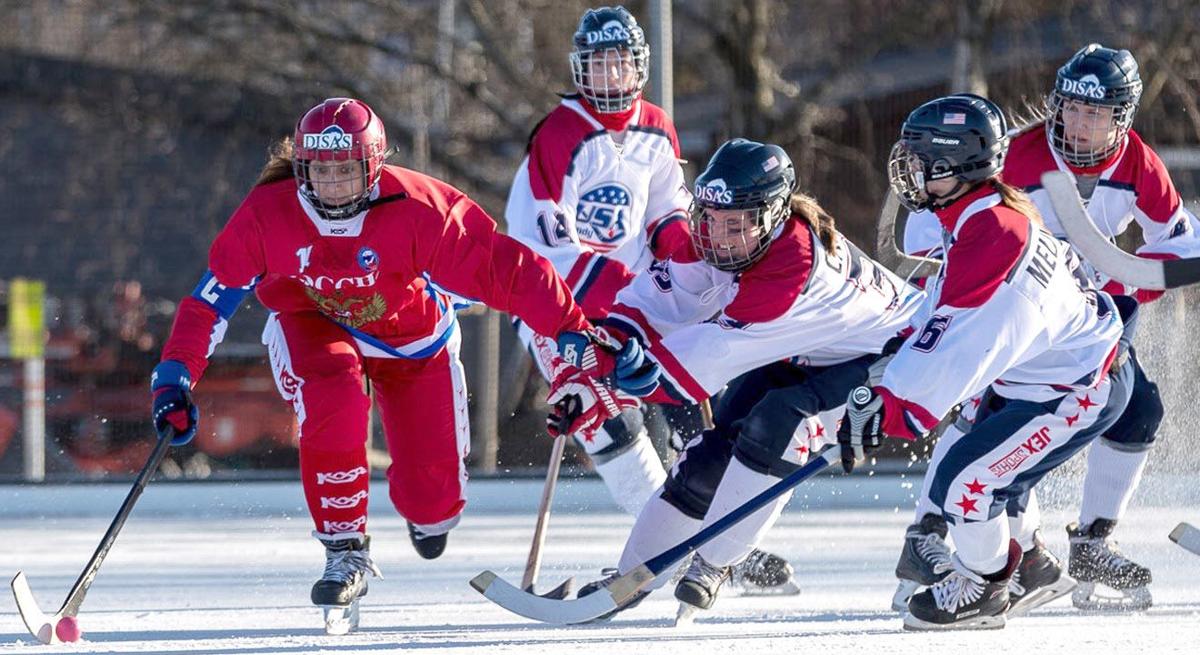 Team USA players, Briana Jentner Carlson and Tam Meuwissen, defend against a rush by Russian superstar Tatyana Gurinchik during the second half of the group play match at the World Championships on Feb. 19, in Oslo, Norway. 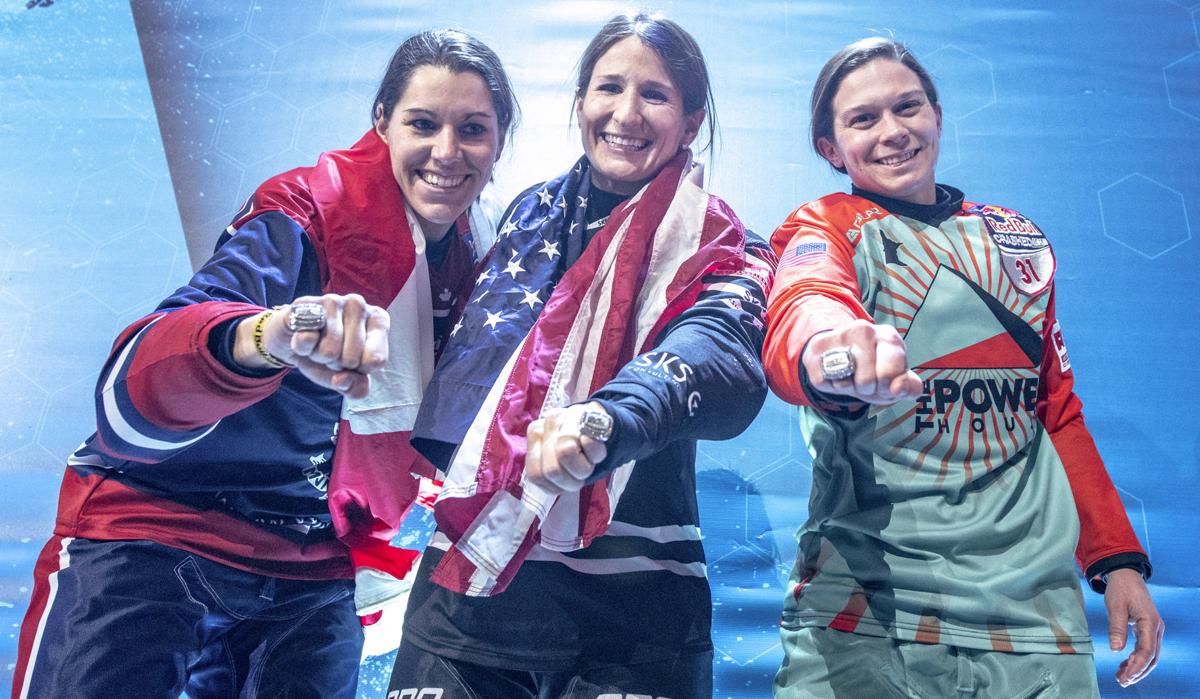 Amanda Trunzo of the United States, middle, celebrates with Myriam Trepanier of Canada, left, and Tamara Meuwissen of Chanhassen, right, during the award ceremony at the sixth stage of the ATSX Ice Cross Downhill World Championship at the Red Bull Crashed Ice at Fenway Park stadium in Boston, USA on Feb. 9, 2019. 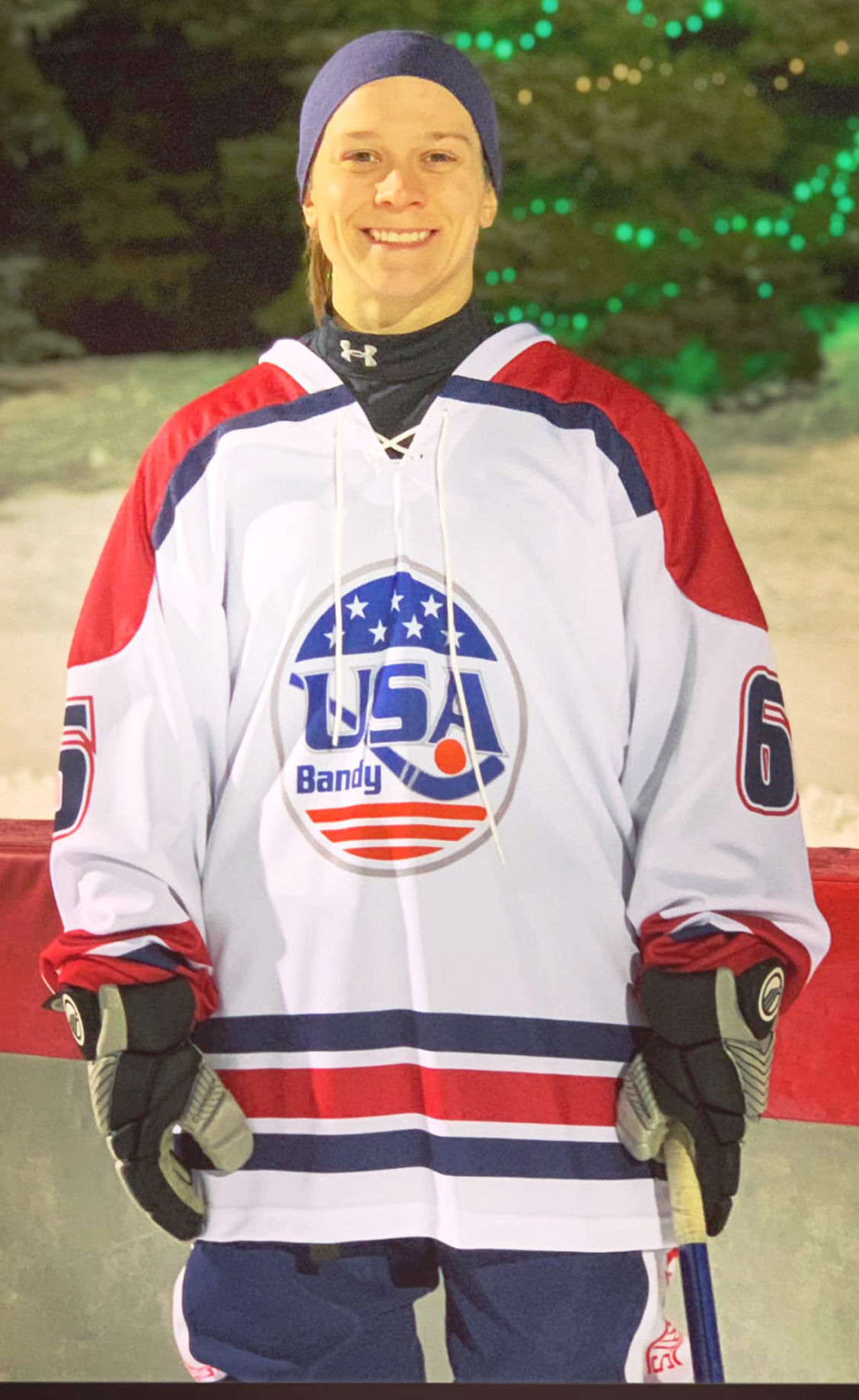 Tam Meuwissen, 2009 Chaska High School alumni, is a member of the U.S. National Bandy Team that recently placed fifth at the World Championships in Oslo, Norway.

Team USA players, Briana Jentner Carlson and Tam Meuwissen, defend against a rush by Russian superstar Tatyana Gurinchik during the second half of the group play match at the World Championships on Feb. 19, in Oslo, Norway.

Amanda Trunzo of the United States, middle, celebrates with Myriam Trepanier of Canada, left, and Tamara Meuwissen of Chanhassen, right, during the award ceremony at the sixth stage of the ATSX Ice Cross Downhill World Championship at the Red Bull Crashed Ice at Fenway Park stadium in Boston, USA on Feb. 9, 2019.

Tam Meuwissen, 2009 Chaska High School alumni, is a member of the U.S. National Bandy Team that recently placed fifth at the World Championships in Oslo, Norway.

Tam Meuwissen has been known as "Five Feet of Fury" throughout her athletic career. An appropriate nickname for the Chanhassen native who played three sports in high school, three sports in college, and now skates down ice, and is a member of the USA Women's National Bandy Team.

How she got the start in each sport is much the same. Someone offered her an opportunity. She never said no. She always went for it.

"The more I've gotten into everything, the more adrenaline has kicked in. I'm always training, looking to get better. I take a week off to rest. That's about it," Meuwissen said.

So, maybe May this year with everything going on around the world, limiting opportunities? "No, April." One week off, she means it.

Meuwissen, a 2009 graduate of Chaska High School, played soccer, hockey and lacrosse for the Hawks. Her freshman lacrosse season was the first year the Minnesota State High School League sponsored the sport as varsity. She had never played the sport before high school.

"There were some hockey girls who played lacrosse. They told me to come and try out. They thought I'd be good at it. I saw it as a sport I could use my stickhandling skills from hockey and the running with soccer," Meuwissen said.

She wasn't the only new player to join the lacrosse program. Her twin sister, Sam, also on the soccer and hockey teams, signed up.

"Both my sister and I were innate with the sport. We really took to it, gained a lot of joy from playing. By the time I was a senior we made the playoffs, and that was something we were really proud of. Eden Prairie still kicked our butts," Tam said.

Sam, born first, was described as the smart one by Tam. "I was more the brute force type," Tam said. Ironically, the sisters switched positions in every sport they played.

"In soccer, I played defense and Sam was forward. She always knew what to do at the right time. In hockey, I was the forward and she was on defense. It actually worked out well. Growing up a twin, we could always find each other on the ice. We used to say, 'twin to twin and in,'" Tam said.

"It wasn't much different than playing three sports in high school. It was like moving from one season to the next. I figured if I had too much time available, I would push my school work later. Sports keeps you on track. It kept me organized," said Tam, who also balanced an on-campus job.

There was some crossover between hockey and lacrosse, the Gusties regularly advancing to the Division III National Final Four in hockey. Lacrosse would start a month earlier in February. Tam said everyone was understanding and she would attend player meetings whenever she could.

Asked what her favorite sport of the three were, hockey was the top choice.

"I really would like to say all of them, because I enjoy the people I'm playing on a team with. Maybe hockey. I love the skating, the stickhandling, having that vision on the ice," said Tam, who had Andy Brink and Chris Erickson as high school hockey coaches.

Following Gustavus, Meuwissen, in graduate school in New York, found out a couple of former college teammates had tried out and made the team in a sport called bandy.

Not just any team. The USA Women's National Team. Meuwissen again was told to tryout. At worst she could play the sport, a combination of soccer and field hockey, in a rec league.

"I liked it so much, I kept coming back," she said.

Bandy, invented in England in the 1800s, is played on a sheet of ice the size of a soccer field. Sticks are used, but with a shorter length than hockey. The blade of the stick is a straight edge, while a golf swing is most effective.

The Bandy ball is made out of a cork, the size of a lacrosse ball. There are 11 players on the field for each team, 10 skaters and a goaltender, attempting to score into a net that is sized in between a soccer and hockey net.

This past February was Meuwissen's third World Championships for USA. Her spot on the field? A familiar position.

"It's actually the same position I played in soccer, left outside midfield. The strategies are very similar, so there wasn't much transition. Luckily they found that spot for me. I like to work it into the corners, find an open player in front, or beating a player around the corner, getting a shot off," Meuwissen said.

Of the 16 women on the national team roster, 15 have been on the team the past three seasons. All are from the Twin Cities area. This allows them to practice out of the Guidant John Rose Minnesota Oval in Roseville.

"A fun fact, it is the only regulation sized Bandy rink in North America. That's the U.S. and Canada. We feel really lucky to have such a pristine location to practice," Meuwissen said.

The only issue is the Oval is outdoors. Fine for Minnesota winters. Not so much the other eight months of the year. The U.S. team plays in a men's league in the winter, heading indoors in the summer to skate once a week with two days of dryland training a week.

Meuwissen is in charge of dryland training. Bandy being an endurance sport, she has the team working out on tracks often. She also takes them to a local tennis court for stick shooting, puck handling and to work on hand-eye contact.

Many of the teams to compete at the World Championships hail from Europe. Sweden, Finland, Russia, Estonia, and Norway are among the top teams yearly.

"Canada hasn't been able to field a team for a few years. They lost a couple of key players. There's also China and Japan," Meuwissen said.

The U.S. placed fifth at the recent World Championships in Oslo, Norway, for the third consecutive year, the fourth time in five years.

"It was pretty special to contend with the best players in the world. I think really raised a few eyebrows. We were taken more seriously. It used to be, oh the U.S., that's a gimme game. Scoreboard doesn't say were how close we were. How we took Norway to overtime. If we had won that game, we're contending for a medal. It's exciting to see the strides we've taken. We're going up against teams that grew up playing Bandy. We're converted hockey players," Meuwissen said.

The U.S. plays an aggressive, physical game, a style not seen often in Europe.

Bandy, part of a pick-up hockey league, a three-sport high school and college athlete, let alone a profession as a health care economics consultant for Optum, there was a little more Meuwissen wanted to accomplish.

How about downhill ice skating.

"Before I went down the track, I thought, I played hockey, I'm a good skater, I will be fine. Once you get onto one of the bigger tracks, you see the drop, and you're asking yourself 'why am I here?' I say just push off and don't stop. We have a fantastic community with the sport. I'm really glad to be a part of it," Tam said.

She's had a trio of podium finishes the last two years, including a third-place skate inside Fenway Park in Boston. The race was broadcast on YouTube. "As far as the venue and location, it's hard to compete with Fenway," Tam said.

Tam and Sam, ranked seventh and 12th in the world in downhill skating at one point in late 2019, are supportive of each other, but both are competitors by nature.

"That's the toughest part. Of course I want to see her do well. She's my sister. There was this one heat in an event in Japan, and it's the No. 1 girl in the world, me and Sam. We knew one of us was going to be done. At least with the earlier rounds we both know we're going to move on. But when push comes to shove, I want to win," Tam said.

All of the downhill skaters are self-funded. Any money or support a racer may need comes from sponsors or their own pockets.

Now that the season is over, the final race in Moscow cancelled due to the Coronavirus, it's time to get creative for training.

"Sam and I, we'll go to skate parks, we'll work off ramps on rollerblades, get that feeling of being in the air. We'll head to pump tracks. Where BMX bikers go. Work on our rollerblades there," Tam said.

The sisters also use a skating treadmill at FHIT Hockey to work on their skating.

Training must go on, one way or another, for Tam.

"I'm always thinking up new exercises. This morning I was coming up with a track workout I was testing out. I'm excited to get back to it all soon," she said.

Five feet of fury, no doubt.