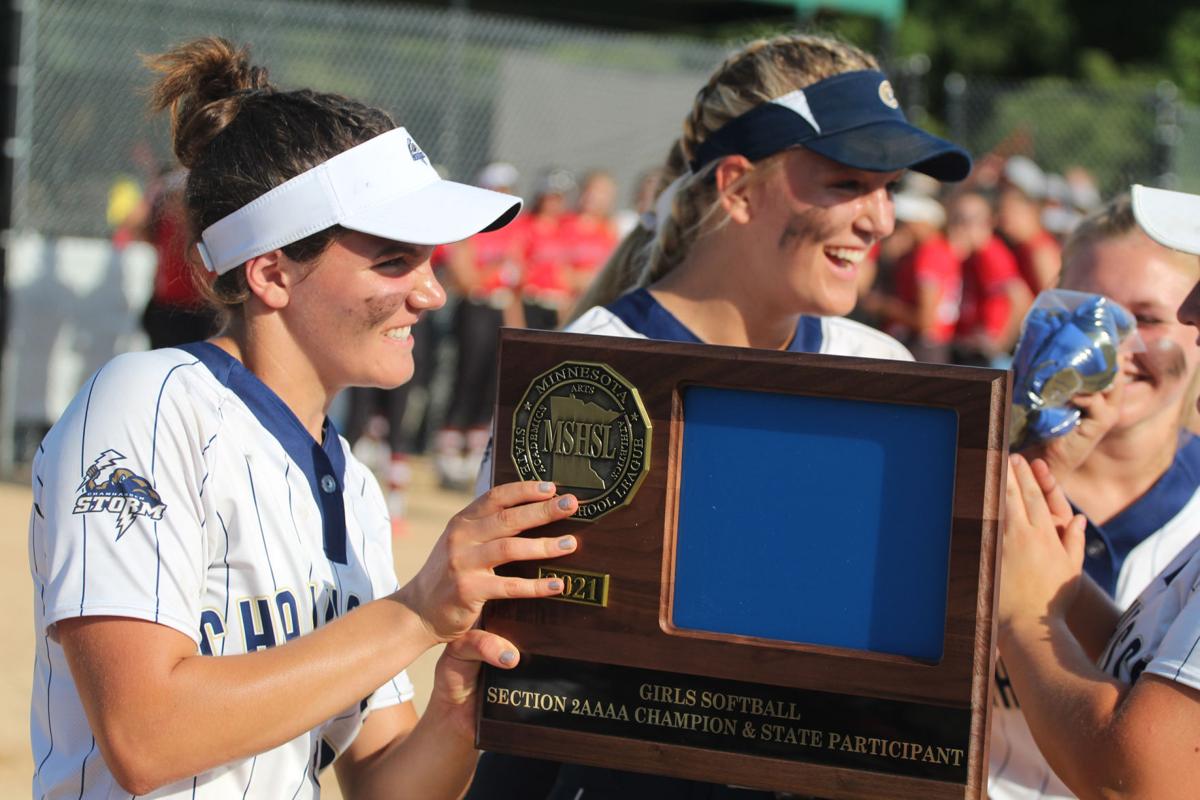 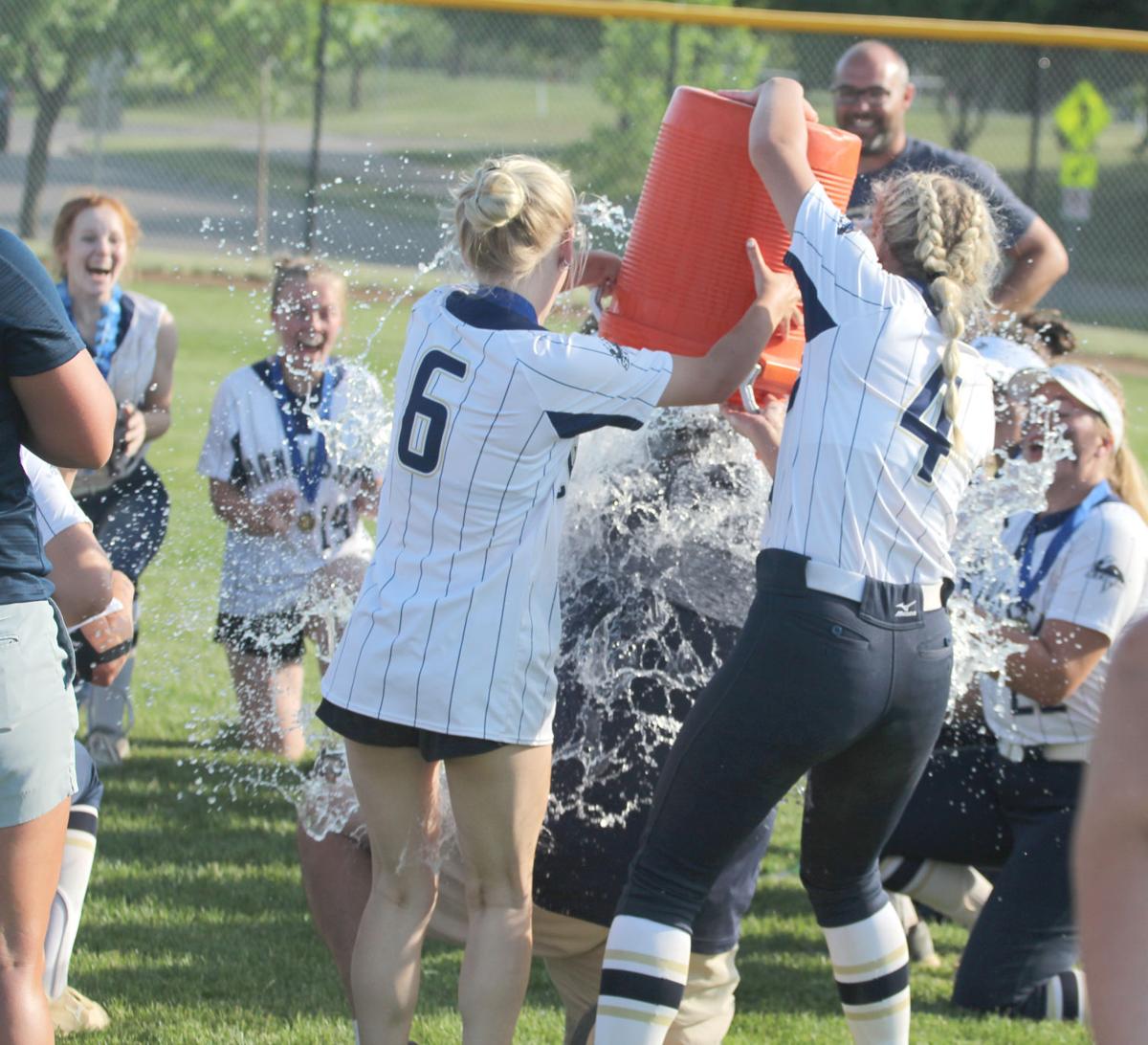 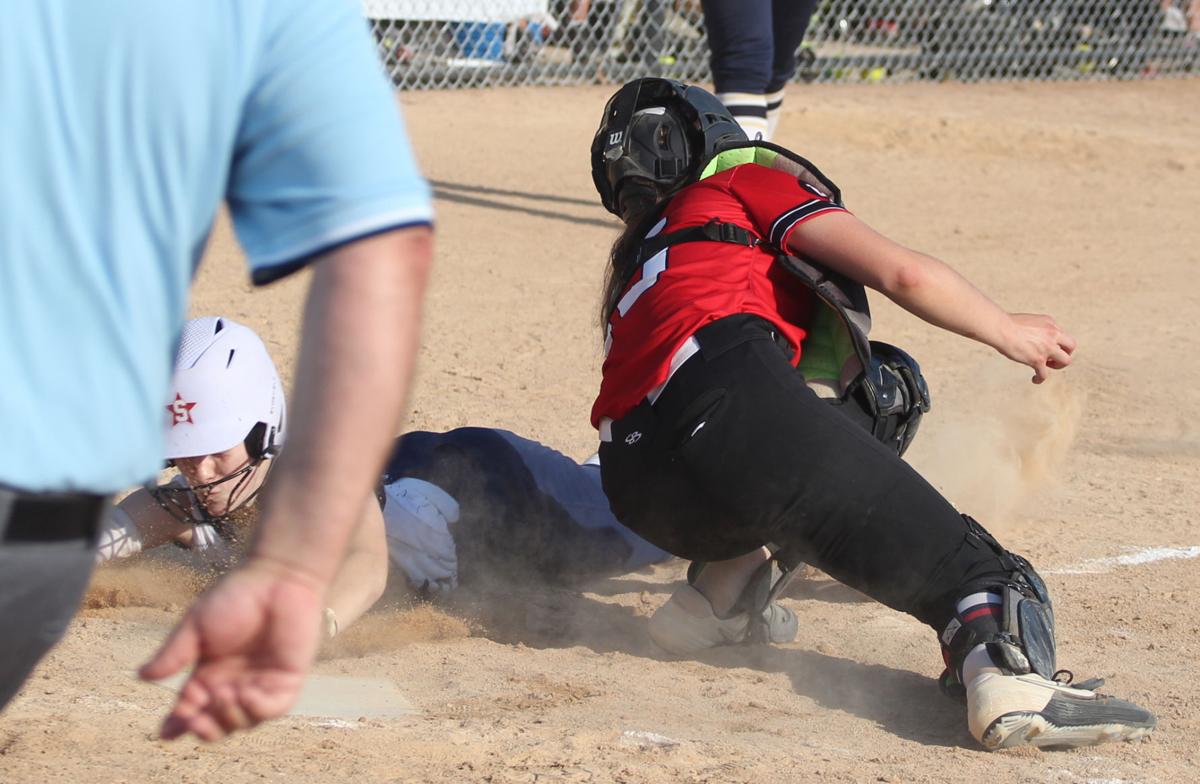 Chanhassen runner Emily Lackey slides in ahead of the tag of the Eden Prairie catcher for the eventual game-winning run in the sixth inning of the Section 2AAAA championship. 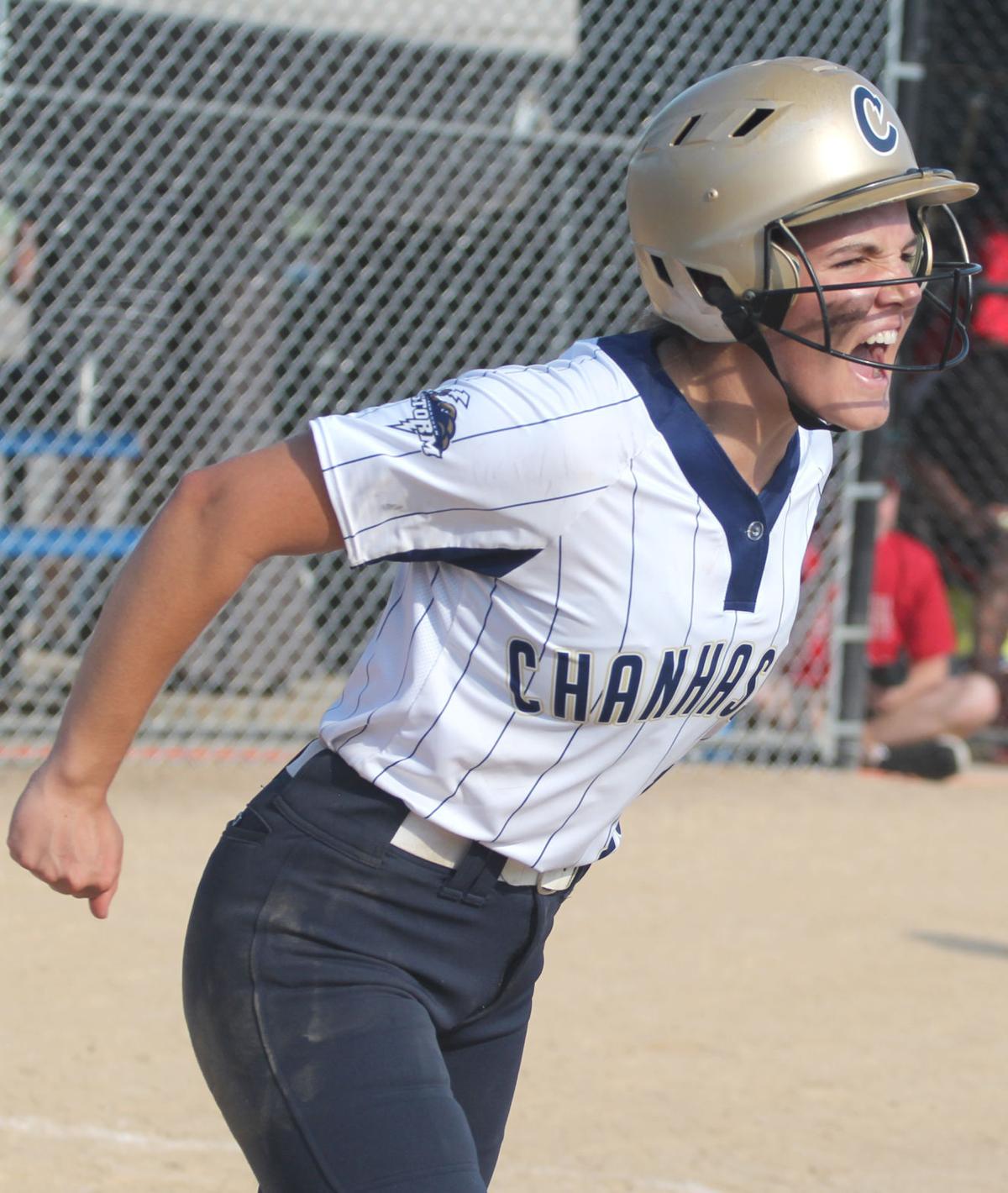 Chanhassen senior Daisy Lang, just minutes after driving in the first run, scores on a Grace Clausen RBI-single for the 2-0 lead in the sixth inning. 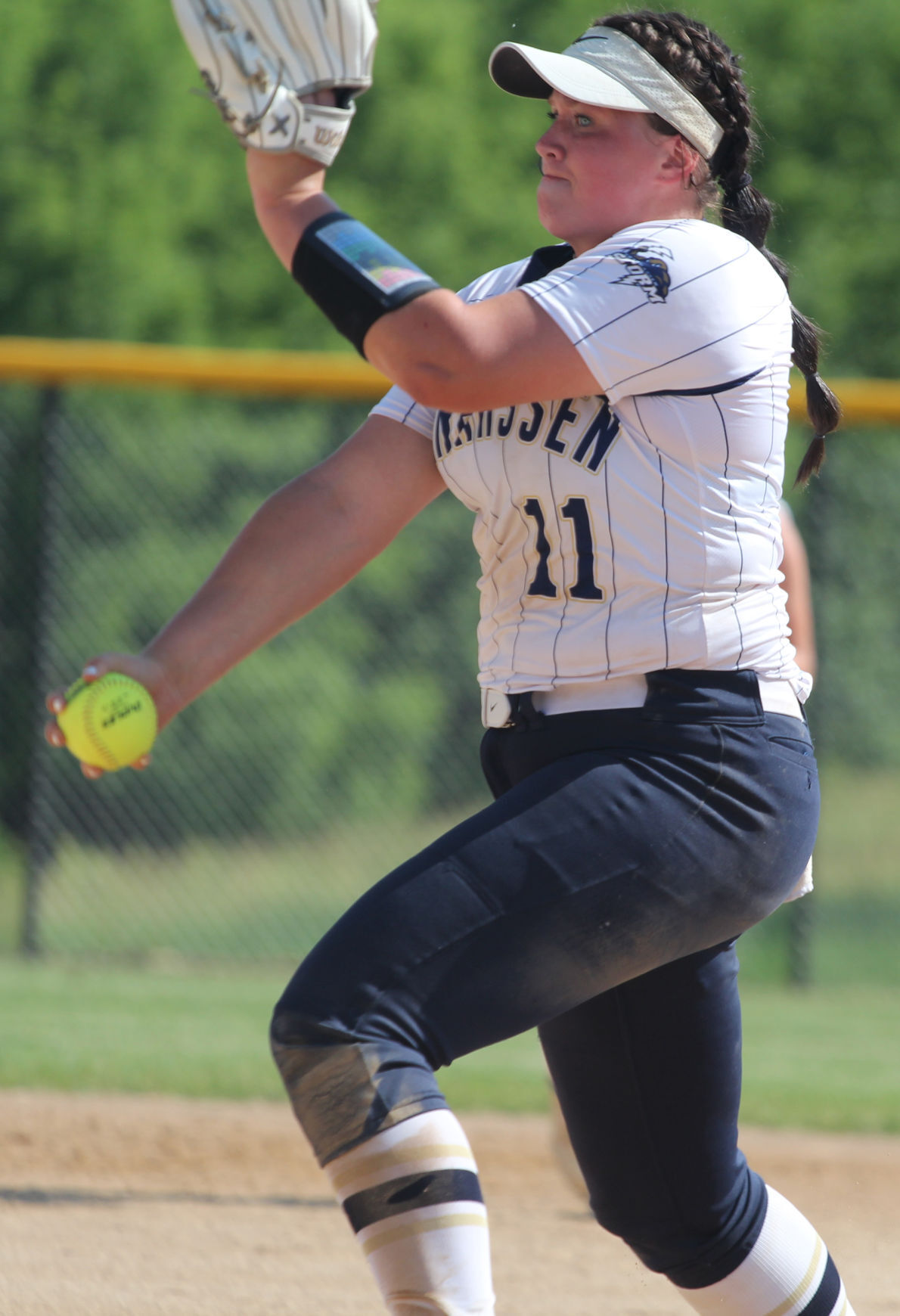 Sydney Schwartz struck out 46 batters with no walks and five hits over 28 innings of work in the Section 2AAAA Tournament for Chanhassen. 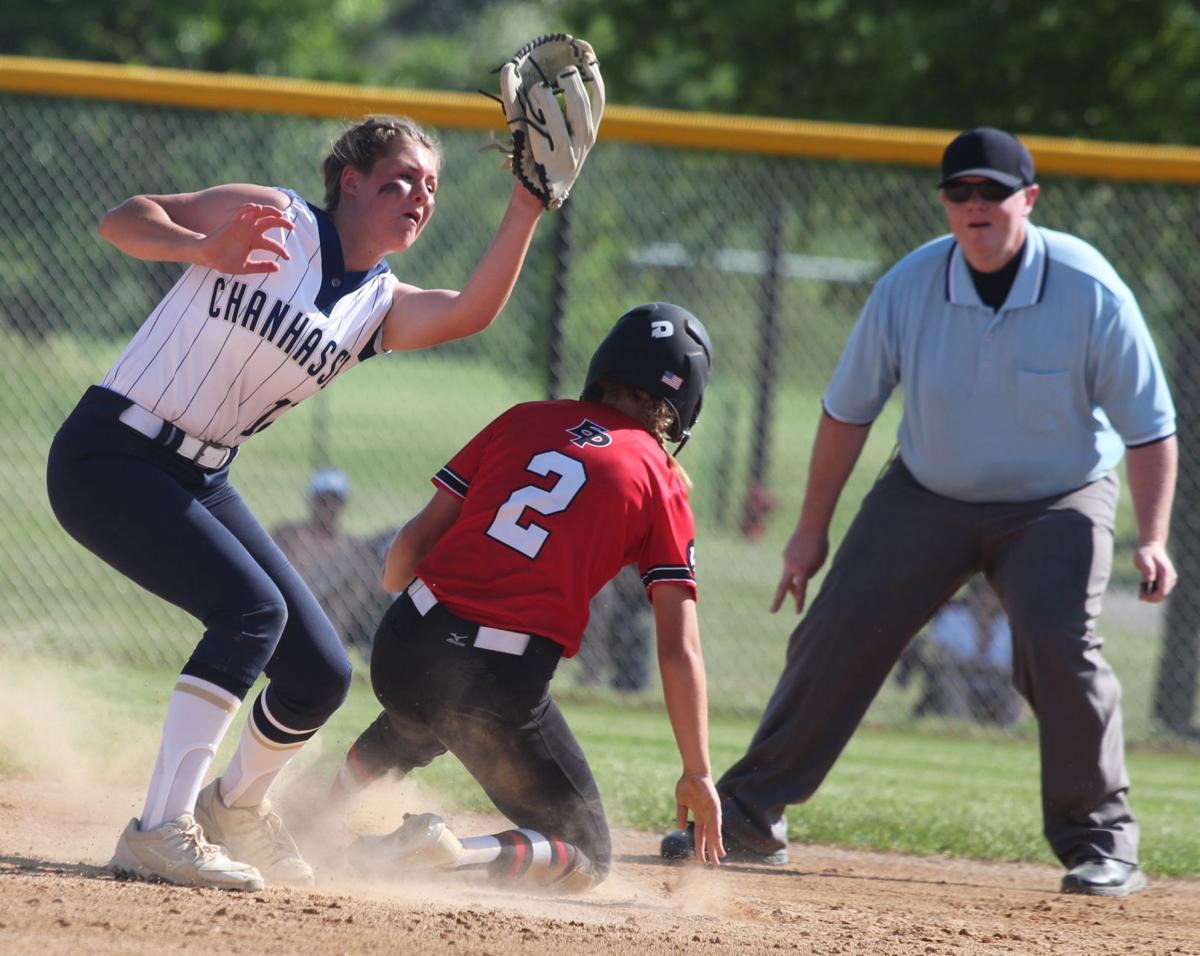 Chanhassen shortstop Karina Tollberg catches the ball as an Eden Prairie runner slides safely into second base on a stolen base. It was the lone runner in two games for the Eagles against the Storm. 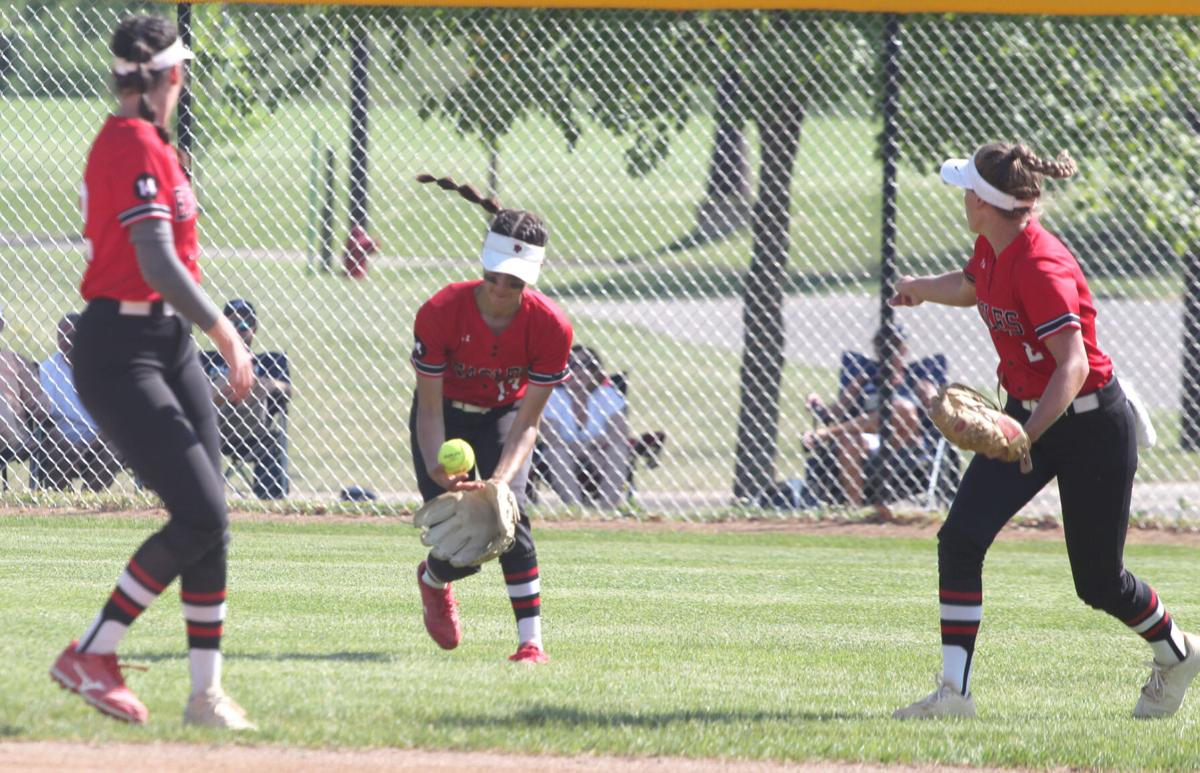 A juggling catch in center field for Eden Prairie ends a second inning threat for Chanhassen.

Chanhassen runner Emily Lackey slides in ahead of the tag of the Eden Prairie catcher for the eventual game-winning run in the sixth inning of the Section 2AAAA championship.

Chanhassen senior Daisy Lang, just minutes after driving in the first run, scores on a Grace Clausen RBI-single for the 2-0 lead in the sixth inning.

Sydney Schwartz struck out 46 batters with no walks and five hits over 28 innings of work in the Section 2AAAA Tournament for Chanhassen.

Chanhassen shortstop Karina Tollberg catches the ball as an Eden Prairie runner slides safely into second base on a stolen base. It was the lone runner in two games for the Eagles against the Storm.

A juggling catch in center field for Eden Prairie ends a second inning threat for Chanhassen.

Hannah Hollowaty wondered if Sydney Schwartz would like her, as a catcher. Coming off her second year at the 14U level, Hollowaty was going to be the battery mate with one of the state's elite pitchers in Schwartz, a University of Minnesota commit.

"I was scared she wouldn't like me, in like a game situation where I would crack under the pressure. Now, I feel like I can handle anything. We've warmed up to one another. We had never hugged before just now, so that was kind of fun," Hollowaty said.

The duo worked together in the off-season. They grew together. The confidence level in each other grew as well. And the results are showing.

"We took a while in the off-season to get warmed up to each other. I felt like that extra practice we got before the season really helped us be on the same page. She knows if I want to miss where it's going to go. That connection really comes with all of the time working together," Schwartz said.

Schwartz and Hollowaty have led Chanhassen to 15 straight wins, including a sweep of four Section 2AAAA playoff games. The first section championship for the Storm since 2017.

"Before games, especially at sections, we've talked a lot about 'we-swings,' not 'me-swings.' This team has really figured out what that means. We're all together with one goal at mind, and that's to win," Schwartz said.

Schwartz threw perfect games in round one and three of the Section 2AAAA post-season, including a 1-0 win over Eden Prairie in the winners bracket final. The two teams met up again June 10 in the championship at Miller Park and hits were at a premium again.

Eden Prairie had just one base runner, a bloop single into right field that halted a streak of 28 consecutive batters set down by Schwartz against the Eagles.

Chanhassen (21-2) had just one hit through five innings, a first-frame threat on a Schwartz double and Daisy Lang walk that was negated by a runner violation. On the pitch, an error seemed to give the Storm a 1-0 lead.

A 0-0 score, Schwartz felt if the Storm could get one run, that would be enough.

"I have a lot of confidence that I can shut a team down, but I have a lot of trust in my defense, too. Look at that catch by Drew (Sustacek). A full-out dive in left. You know batters are going to put the ball in play. You're just trying to get them to hit it where your defense is," Schwartz said.

Schwartz started a sixth-inning rally with a two-out single, replaced on the base paths by runner Emily Lackey. Schwartz watched from the dugout as Lang, a senior, drove a ball into the right-center gap.

Lackey rounded second base -- Chanhassen coach Joe Coenen waving her home -- and then third base. A relay from the outfield brought a bang-bang play, Lackey getting her left arm on the plate ahead of the tag.

AUNTIE DAISY DUKE WITH A HUGE HIT TO SCORE EMILY🎊🎊 STORM UP 2-0 IN THE 6th pic.twitter.com/Ql2drAK2qL

A second run was scored on senior Grace Clausen's RBI-single to plate Lang.

"I wanted to watch that at-bat. I knew she's make the adjustment. I just had a feeling this was going to be the one she figured out," Schwartz said of Lang.

"It was crazy. Everyone was jumping up and down," Hollowaty said.

"It was loud," Schwartz said.

Two runs was plenty for Schwartz and Hollowaty.

After third baseman Susie Tollefson stole a bunt single away from the Eden Prairie lead-off batter in the seventh inning, Shayden Benedict did the same for out two, a backhanded stab up the middle.

One out away from state, Schwartz fielded a come-backer, firing to first before the celebration ensued.

For the playoffs, Schwartz allowed five hits, two runs and zero walks with 46 strikeouts over 28 innings.

"The ump on Tuesday was calling everything low and today's ump was giving us nothing. On lefties he wasn't calling anything inside. I went out there a few times, we talked about what we were seeing. I knew I had to get my body in front of it, not reaching with my glove. I thought we adjusted well," Hollowaty said.

Schwartz was a spectator at Caswell Park in 2016 when older sister Maddie got the ball midway through the championship game. She was there in 2017, a seventh grader in the stands, to support the Storm to a third-place finish.

Now she's headed to Mankato June 15. This time, all eyes are on her.

"We're not going to change much. Stuff is working. It's just another tournament," Schwartz said.

"We need to go in with the confidence we showed at sections. Not cocky, but we need to go in and play like we know how to play. We need to take it like it's just another game we get to play in," Hollowaty said. "Well, except it's state."